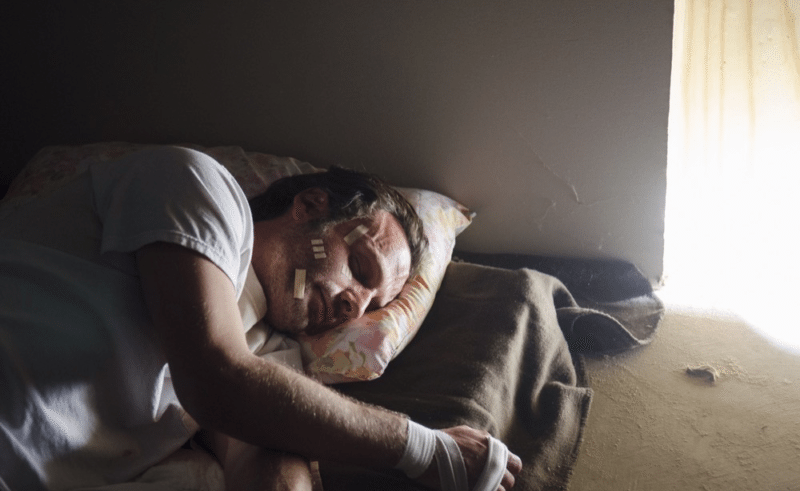 As the newest episode of THE WALKING DEAD was released on Sunday, so were the onslaught of negative reviews. This newest episode brought the show back to its typical snail-like pace. It successfully dragged out a 10-minute story into 40 minutes, then stuffed in enough commercials to make you wonder if Matthew McConaughey driving a Lincoln was part of the show.

Pacing is clearly an issue with the show, and something many people have addressed. While the pacing is definitely a problem, I believe the yawn-inducing nature of THE WALKING DEAD is a symptom of another, more fundamental flaw in the show. The majority of scenes in THE WALKING DEAD that involve dialogue between characters have little to no blocking. Character blocking is a tool used by screenwriters of all genres, and is an essential part of effective story-telling that THE WALKING DEAD has been lacking since the first season.

Character blocking is the actions and movement of your characters while they are speaking. Want two characters to speak to each other so you can inform the audience of something important? That’s fine, but be sure to place them somewhere visually interesting, or have them do something that the audience can watch. It’s important to keep audiences visually entertained, especially during scenes that exist to further plot exposition. Poor blocking, and thus poor screenwriting, has characters doing nothing as they speak to each other.  Stagnant visuals eventually become boring to viewers. Unless the dialogue is incredibly intense, your audience will lose interest in what’s happening.

Take this scene from last week’s episode of THE WALKING DEAD. In this scene, Ezekiel and Carol discuss their past, and how they’ve each become the person they are.

What caught your eye during this scene?

Nothing did. Carol and Ezekiel are sitting on a couch speaking to each other. Besides their mouths, the only other thing even moving in the shot was the fire.

There is no blocking in this scene. Ezekiel is telling Carol that he was thrown into his job of ruling his community, but is secretly just an actor pretending to be powerful. He’s exposing himself to Carol, who can relate to Ezekiel’s story after forcing herself to become a hardened, killing survivor. But we are only able to pick up on this through their conversation. Nothing else about the scene tells us anything about the characters, the environment, or any other element to the story. Visually, this scene was boring.

Why couldn’t there be character blocking that adds to the conversation? Ezekiel is emotionally exposing himself to Carol, and allowing her to see the real Ezekiel. Why couldn’t this have been represented visually? Could Ezekiel have taken off his robes and changed into street clothes, a metaphorical exposure of his true nature? Or better yet, couldn’t this conversation have taken place as Ezekiel places Shiva, his pet tiger and ultimate symbol for his power, in her crate? This would be representative of him showing his true colors, and add to the scene. But instead, THE WALKING DEAD decided to sit both characters on a couch.

Let’s look at another example. Here is a similar scene between Jaime Lannister and his father, Tywin Lannister from the HBO series GAME OF THRONES. This scene is roughly the same length as the previous scene, with a similar goal of character and plot development.

Now what caught your eye during this scene?

As Tywin speaks to his son he is gutting and skinning a stag, and it’s impossible to miss. We’re watching him viciously cut open this animal as he is speaking, and this adds to the intensity of the scene. This blocking keeps us from getting bored, and entertains our eyes while our ears follow the exposition.

But the blocking does more than just keep us entertained, it adds to the dialogue itself. The brutality of his skinning is representative of the advice he is giving Jamie in that moment. Tywin believes the Lannisters should respond to Tyrion’s kidnapping with brute force, rather than politics. He believes that this is the only way to ensure that their namesake will remain powerful, and his skinning of the stag perfectly captures this. As Tywin speaks of aggressive actions towards their enemies, we’re watching equally aggressive actions towards this dead stag.

This scene uses character blocking to keep the scene interesting, but also reinforces the thematic elements of the dialogue. Tywin becomes upset while he speaks, and begins forcibly hacking away the skins from the carcass. His blocking allows him to show his anger beyond his words. Rather than just hearing his frustration, the audience is watching it. This is entertaining to watch, and allows us to pick up on character emotions without needing to hear what they’re saying.

The stag also visualizes his relationship towards his son. Tywin is cold and mechanical with his demeanor, and believes that bringing death to their enemies is how he takes care of his family. Rather than speak to Jamie face-to-face, he’s visually informing us where his priorities lay. It’s not until Tywin turns to his son and places his hand on his face that we see a more caring side of Tywin. Once again, his blocking is representative of his emotions. This is good storytelling.

As long as THE WALKING DEAD plops characters on a couch when they speak to each other, it will continue putting audience members to sleep. Moreso, critics will continue to attack it for its slow and boring character interactions. There are countless examples of good character blocking out there, and I encourage you to find more examples. It is up to the audience to hold THE WALKING DEAD to a higher standard when it comes to its storytelling, and that begins with awareness.