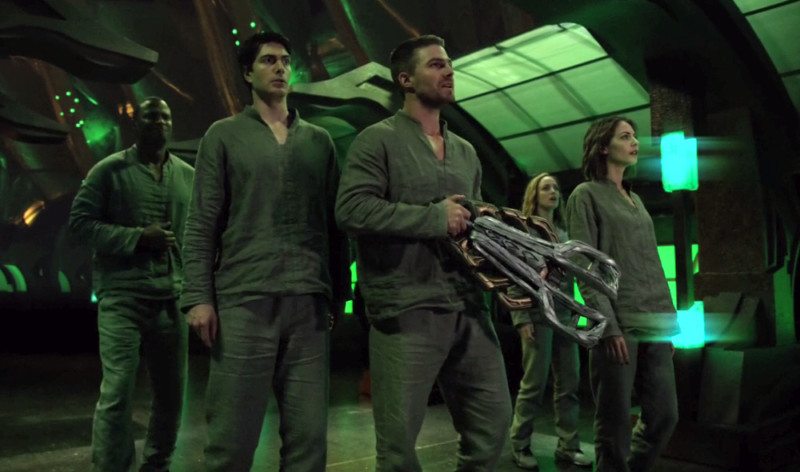 Last week’s crossover event slowed down and took a moment to reflect on where it all began. ARROW’s hundredth episode acknowledged how far the series has come while inspiring the creation of CW’s Arrowverse. This particular episode was, in a sense, an anniversary to the series and the best way to illustrate the Dominators capturing the non super-powered members of the invasion team.

The episode opens with Oliver and Laurel Lance (Katie Cassidy) a few days before their wedding. Yes, that’s odd because we know Laurel bit the dust last season after taking on Damien Darhk (Neal McDonough). Oliver and the old team Arrow were taken by the Dominators and placed in a Matrix-esque system, putting them in a life they might have had if they never donned their costume. Viewers that are familiar with this trope will know that the hero(s) will get the feeling that everything is not what it seems and will go searching for the truth.

The false reality felt like you were watching a bonus episode of season one, because both Robert Queen (Jamey Sheridan) and Moira Queen (Susanna Thompson) were alive. Both parents told Oliver and Thea Queen of how proud of the people they’ve become today. It was a touching moment for both characters because seeing both their parents again is something they’ve longed for. When you are having an awesome dream, you never want to wake up. That’s how Thea felt when it was time for her to go back to the real world.

When the old team Arrow came to realize they were in a dream, Oliver has this heartfelt moment with Thea where she decides she wants to stay and be happy; a la blue pill. The idea of knowing the truth or choosing to live blissfully is a conundrum. Choosing either may all depend on the person’s view on the world.  Thea wanting to stay is a natural response to a happy dream. Humans generally want to always be happy, so why not sacrifice what’s real for something better? To answer that question, one would have to look at their own lives and see whether it would be worth it.

ARROW’s hundredth episode was a subtle reminder of the series’ entirety. Oliver’s fake life makes you think: what if he didn’t become The Hood? Oliver becoming The Hood reminds you of all the lives he saved since season one. This season, Oliver has been doubting his methods on whether he’s making Star City a better place, considering the city is still filled with crime and crooked cops. But, forcing Oliver to look at his past makes it clear to him that he can’t give up. In short, Invasion: Part 2 was a great way to celebrate ARROW’s one hundredth episode and the rest of Arrowverse on the CW.