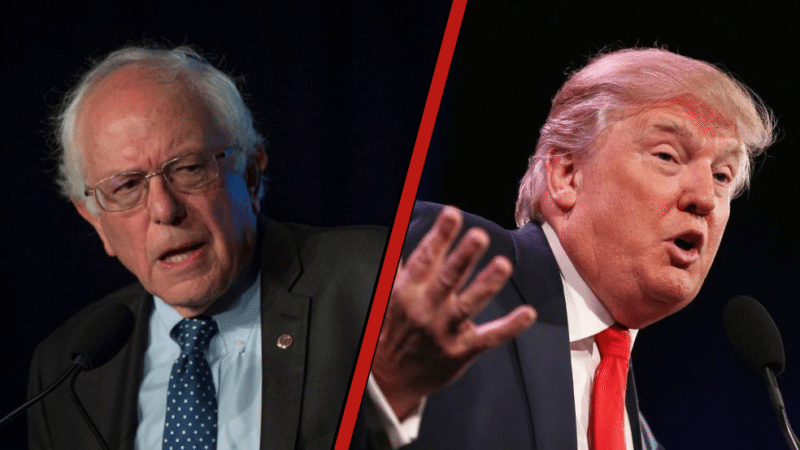 If Trump and Sanders have one thing in common, it’s that they both present themselves as anti-establishment. Sanders has his thick Brooklyn accent, scruffiness, and his calls for a ‘political revolution’. Trump has his outsider status, unconventional policies, and his political incorrectness. To the American people, they are both something out of the ordinary—two individuals who have marketed themselves as leaders of the crusade on the status quo.

For over 40 years, Bernie Sanders has advocated a different kind of governance. As a socialist, rebranded as a ‘democratic socialist’ when he ran for the Democratic nomination, he has never been shy of speaking out against the current state of affairs. In 1972, under the Liberty Union banner, he ran for one of Vermont’s U.S. Senate seats. In 1974 he ran for the state’s other Senate seat. He also ran as the Liberty Union’s candidate for the governorship  in 1972 and 1976. In all four campaigns, Sanders attracted support in single digits.

READ: Is this the end for Bernie’s ‘Political Revolution’? Read our article on how he can keep his dream alive!

But winning was never Sanders real goal. In fact, he openly admitted at the time that he did not expect to win any of these races. During his 1974 Senate campaign, the local Bennington Banner quoted Sanders at a Liberty Union event. Sanders told supporters  that the goal of his candidacy was to “open [the people’s] eyes and give them a vision.” Similarly, in his 1976 run for governor, Sanders told reporters at a press conference that he only hopes his campaign will result in a decent showing at the polls. This would then have a “national impact”, showing voters that there are alternatives to the traditional two-party system.

Once finally elected into office in March 1981, Sanders continued his anti-status quo rhetoric. Elected to be the Mayor of Burlington as an independent with a majority of just 10 votes, it was always going to be tough for Sanders. For the first few months of his mayoralty, the city’s board of aldermen blocked Sanders’ appointments. Only 2 of the 13 aldermen supported him; the other 11 Democrats and Republicans vehemently opposed any of the mayor’s actions. In June 1981, Sanders told a press conference “I guess now what I expect is that the Democrats on the board are going to attempt to make every day of my life as difficult as possible.”

Since then Sanders has continued his fight against the establishment. Elected as an independent for the U.S. House of Representatives in 1990 and, following this, the Senate in 2006, Bernie’s consistent, independent agenda has steadily made him one of the most recognizable anti-establishment politicians in recent history. Never one to shy away from confronting the status quo, he has demonstrated that he wants to decisively change the system. Coming to a head in the 2016 Democrat’s primaries, Sanders proposed and promised a ‘political revolution’. Rejecting campaign donations from corporations, the finance industry, and any associated Super PAC, Sanders advertised himself and his campaign as a new type of politics. He opposed the North American Free Trade Agreement (NAFTA), supported complete Universal Health Care, and promised to break up the banks who were “too big to fail.”

CLICK: Are Superdelegates good for democracy? Check out our take on their role in politics.

When Sanders announced his bid for the Democrat’s presidential nomination in April 2015, he was setting himself up to be a real, viable alternative to the norm. At this time, most predicted a much more regular election. For the Democrats, it looked like primary season was going to be a simple coronation for Hilary Clinton. For the Republicans, it seemed an establishment figure such as Jeb Bush or neocon protégé Marco Rubio was going to win. Sanders was going to stand out as the alternative—the obvious anti-establishment candidate who would clearly demonstrate to voters that they don’t have to be stuck with the status quo.

Then along came Trump. 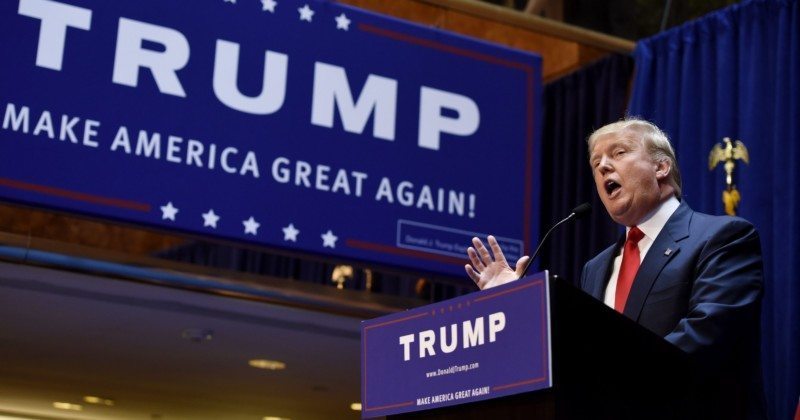 With his very first speech, Trump shocked both the political establishment and the public. “They’re [Mexicans] bringing drugs, they’re bringing crime, they’re rapists” he told the audience at his announcement speech in June 2015. Straight away it was obvious that this candidate was different from all the others. To some, he was exciting and new. To others, volatile and unprincipled. Either way, he wasn’t anything like the traditional insider, establishment politician. He boasted of his wealth, using it to argue that, because of it, he could not be bought. No lobbyists, financiers or special interest groups could pressure him to change his policies for their own ends—a problem rife in national politics and thus separating himself from all the other candidates.

The separation between Trump and the rest of those seeking the Republican nomination continued throughout the campaign. His fight against Jeb Bush in the G.O.P. debates,  perhaps the most establishment candidate in the Republican primaries, only highlighted his differences. Focusing on George W. Bush’s War in Iraq, Trump lambasted Jeb with insult after insult. Every callous and crude line fired at Bush indicated that Trump was not a part of the establishment. He was someone that disagreed with the status quo and wasn’t afraid to show it.

Not only has his political incorrectness exaggerated his anti-establishment persona, but, if we strip away his political faux pas and examine his policies, it is clear that he is not a normal Republican.

Time and time again Trump has butted heads with the G.O.P. establishment on policy. He has voiced support for single-payer health care—that is to say, health care managed entirely by the government. He disagrees with a flatter tax system. He doesn’t completely oppose Planned Parenthood. His pledge to remove free trade deals and reduce America’s role in foreign affairs goes firmly against traditional Republican positions.

Politically, he has also shown his opposition to establishment Republicans. Trump has consistently attacked and aggravated leading figures of the party —as well as his showdown with Jeb Bush, he has gone from labeling Senator John McCain as ‘not a war hero’ because he was captured, to initially refusing to endorse Speaker Paul Ryan in his recent primary race.  So far there have been 7 Senators, 7 Representatives, 2 Governors and a whole host of party elders, insiders, and national security experts, who have all indicated that they will not be voting for Trump in November. The list continues to grow almost daily. But this only strengthens Trump position as the man who can really change the system.  Supporters argue that if the system hates him, then he must be doing something right.

To Sanders dismay, this tactic worked. Trump stole the limelight and became the anti-establishment candidate.

The Donald’s stranglehold of the headlines throughout the primary season ensured that he was the candidate that everyone knew about. Sanders had his young, college-educated supporters, but the most important demographic for Trump and Sanders —the middle-aged white working class—gravitated towards the former. 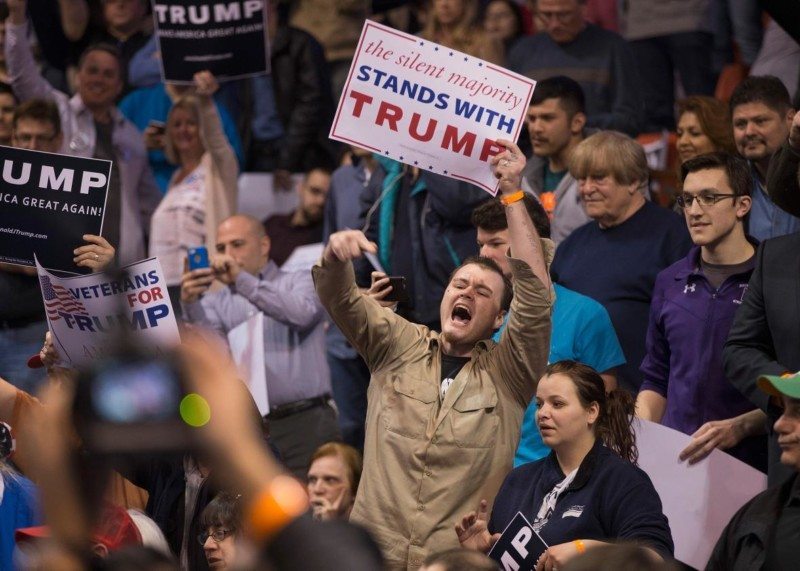 Trump speaks to this demographic better than Sanders can. Promoting nationalism and putting in clear terms who and what is to blame for their economic and societal decline. Republican Presidential candidates have typically been more successful with whites than the Democrats, receiving majorities of the white vote in every election since 1964. But no Republican candidate—not even Richard Nixon or Ronald Reagan—made as specific an appeal to the economic anxieties and social resentments of white Americans as Trump has. When he vows to “make America great again,” he is talking about and to white America; especially the less well off.

READ: Can Facebook Change The World? Are You An Activist or Slacktivist?

Bernie attempted to ignite a progressive flame amongst this demographic. The identity he promoted, however, hasn’t resonated as well as Trump’s. The progressive identity, in some cases, comes with an aversion toward, even contempt for, their fellow-Americans who are white and in economic and social decline. Abstract sympathy with the working class as an economic entity is easy, but the feeling can vanish on contact with actual members of the group, who often arrive with disturbing beliefs and powerful resentments—who might not sound or look like people urban progressives want to know. White male privilege remains alive in America, but the phrase would seem odd, if not infuriating, to a sixty-year-old man working as a Walmart greeter in southern Ohio. The hardliner progressive identity on the left pushed working-class whites, chastised for various types of bigotry, all the more decisively toward Trump.

Trump’s success with this section of society undeniably drew votes away from Sanders, thus aiding Clinton’s campaign. Perhaps if the leading G.O.P. candidates had been more traditional, then Sanders would have fared better. But in a contest between Sanders and Trump vying for the anti-establishment, outsider status — Trump beat Bernie.