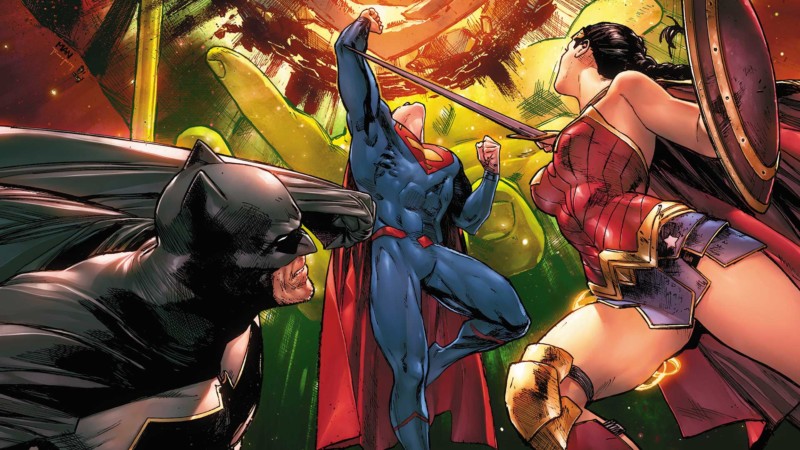 There Can Be Only One

TRINITY #8 feels more like an issue of SUPERMAN with Batman and Wonder Woman as guest stars, and that’s for the best. As a “Superman: Reborn Aftermath” tie-in, TRINITY #8 takes a moment to slow down and examine what really happened to Superman. As such, it’s one of the most important issues yet in the DC Rebirth line-up. For the first time, Superman, Batman, and Wonder Woman openly discuss what’s been done to the Man of Steel and their universe as a whole. This brings the specter of the Watchmen out from the shadows and thrusts them unwillingly into the light. The result is an issue that feels meaty and necessary, as the DC Rebirth Universe builds towards its primary conflict.

Writer Cullen Bunn delineates TRINITY #8 between two primary modes. In the first section, Superman meets with Batman and Wonder Woman in the Fortress of Solitude to inform them in secret of the events that transpired in Mxyzptlk’s dimension. Superman reveals how he had been split into two separate beings, and warns his allies that even more damage may have been done to the universe. He also reveals to them a recurring dream, the depiction of which is told in TRINITY #8’s other section. The dream illustrates the battle between the New 52 and Rebirth Superman, crashing their way through Metropolis as they fight for the identity of the true Man of Steel. Batman and Wonder Woman intervene in this dream, but even they aren’t sure who’s real and who isn’t. Ultimately, neither is Superman.

TRINITY #8’s primary accomplishment is its delving into the mechanics of exactly what’s been done to the DC Universe. No answers are given, but it’s the first time we’ve seen our characters openly discuss the manipulations that have, up until this point, only been seen by the readers. After all the hinting and teasing, it was about time we had some of our favorite characters acknowledge the mystery at hand. It’s nice to see Superman speculate about what else might’ve been tinkered with, realizing that it probably extends past him and may include his allies in the Justice League. This finally gives voice to what a lot of the readers have been speculating.

READ: For more on how the Man of Steel deals with the aftermath of his rebirth, take a look at our review of SUPERMAN #20!

TRINITY #8’s delineation between the Fortress and dream settings also creates a unique balance between action and drama. Usually, TRINITY focuses on character drama while interspersing action at key moments. Yet here, the two are uniquely represented in each locale. The drama permeates through the conversation in the Fortress, while the action takes place in the Metropolis dream conflict. This provides an interesting story structure, but also a unique chance for each of the three main characters to shine in distinctive ways.

In the dream, the two Supermen are represented equally, and when Batman and Wonder Woman enter the picture, it’s difficult for them to decide who to help. Their decisions appear to say a lot about their respective characters. Batman immediately tries to help the Rebirth Superman, probably due to his appraisal that this Superman is the older and wiser of the two. Wonder Woman, however, instinctively goes to the New 52 Superman, no doubt because of their past romantic relationship. These moments aren’t explained, simply left as clever details for the keen observer to recognize.

The Fortress conversation also gives us great character moments, with Batman making the extremely logical and calculated decision to keep Superman’s information within the Trinity. Wonder Woman, because of her own experience with dishonesty and deception (as told in her own series), is understandably reticent to take this approach. Superman, having been at the center of all of this, displays the most confusion and uncertainty about how to move forward. He comes to doubt everything, including whether he himself is truly the real Superman. It’s a question that’s definitely worth asking after all he’s been through, and it adds an even deeper layer to this extremely explorative issue.

The artwork by Emanuela Lupacchino is serviceable for the story, if not overly noteworthy. There are some great action sequences, and Lupacchino’s style has a certain looseness that makes the panels flow very nicely. He also does well with the distinctive character designs, particularly when dozens of Batmen, Supermen, and Wonder Women emerge from the multiverse in radically different wardrobes. Still, he uses less detail than other artists who’ve worked on TRINITY. The facial expressions, in particular, leave something to be desired, and I suspect tighter pencil work would’ve come in handy.

READ: The Dark Knight has been keeping busy. Read all about his battle with Bane in our review of BATMAN #20!

TRINITY #8 gives us a much-needed breather after all the madness of “Superman: Reborn.” The story takes the time to hone in on Superman’s thoughts and feelings about what transpired, as well as finally making our three main characters aware of DC Rebirth’s grand manipulator. With the Watchmen & DC conflict looming larger than ever, this issue excellently builds anticipation and puts our characters in a fascinating position as they prepare to face the greatest threat to their existence.