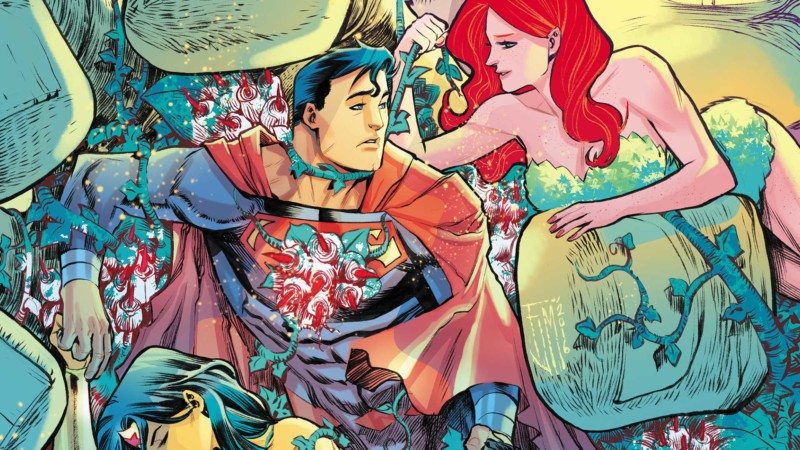 TRINITY #5 marks the culmination of Batman, Wonder Woman, and Superman’s journey through the mysterious dreamscape they’ve been trapped in. Writer & artist Francis Manapul has been building up the stakes for the past four issues, as the Trinity journeyed deeper and deeper into their own psyches. Now, though, they’ve reached the deepest level, and come face to face with the entity responsible for their predicament – Mongul! In a surprise twist, we learn that Mongul has been manipulating their dreams in a bid to free himself. He’s accomplished this through the powers of his child, who entered the dreams of Batman, Superman and Wonder Woman disguised as people significant to them. Back in the Kent farm, where the unconscious bodies of Clark, Bruce, and Diana remain; Poison Ivy explains to Lois Lane how a child was given to her in the dreamscape, a child she learned to love and now seeks to free. This child turns out to actually be the aforementioned spawn of Mongul. In addition to dreamwalking, Mongul’s heir feeds on solar energy, which is just what the warlord needs in order to free himself from the dreamscape. How convenient that the best source of solar energy is a Kryptonian who happens to be sharing the very same dream space.

These revelations are wild, and ultimately kind of bonkers, especially given the serious, psychologically deep storytelling we’ve been treated to over the past few issues. One reason this series has worked so well is because Manapul devoted equal time to exploring the psyches of Batman, Superman, and Wonder Woman; giving each character brilliant new depth as they confronted key moments from their past. Each issue focused on one member of the Trinity, devoting the entire page count to that character’s world and memories.

Having triumphed over their past selves by TRINITY #5, the trio’s psychological depth is largely tossed out the window in favor of a focus on Mongul’s sinister plot. This is totally fine, and the issue flows along quite well; it’s just a totally jarring difference in terms of pacing. The first four issues were methodical in their approach to the deep drama of Batman, Superman, and Wonder Woman’s memories. TRINITY #5 blows by at rapid-fire pace, tossing in one wild twist after another as the Trinity furiously battle Mongul. The revelation of Mongul’s child who manipulated Ivy into loving her and acts a beacon for solar energy that she needs from Superman in order to free her father…. it’s totally bat-s**t crazy, but it’s also awesome. Despite the sudden turn from serious drama to wild entertainment, it all works in selling a unique tale that only Manapul could create.

Only Manapul could draw it, too. His bold sketches of our heroes and the vast, intimidating scale of Mongul create a large scope, and a majesty evocative of Greek warriors battling a God. The colors are eye-catchingly vivid too. The greens of Ivy’s world contrast with the hellish red of Mongul’s domain. Each arena is given its own dreamlike haze and overall surrealistic tone. These settings are distinctive and carefully evoke totally different emotional responses.

Overall, this was the briefest and brashest issue of TRINITY to date. It was a radical departure from the tone and storytelling structure of previous installments, but considering the wonderful character development we’ve gotten over the past four issues, that’s A-OK. The mystery had been stretched out for long enough, and it was about damn time we got some answers. Granted, those answers might be more whacked out than readers anticipated, but they’ll certainly keep us wanting more. With this arc concluding next issue, I’m predicting a stellar finish to a wonderfully explorative and uniquely rich addition to the post-REBIRTH DC Universe.