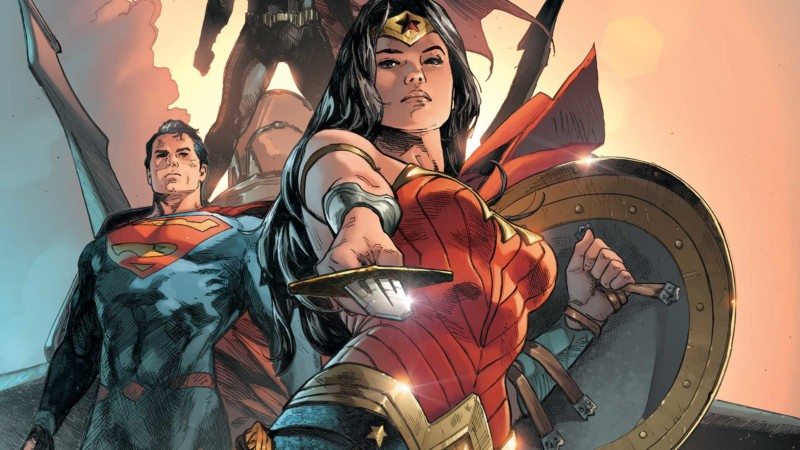 Friendship, family, and nostalgia have been recurring themes in TRINITY. While DC’s legendary triad are mysteriously transported to the past, they rekindle their friendship, visit their hometowns, and reminisce about their childhoods. In the previous installments, writer Francis Manapul transported readers to the pasts of Superman and Batman. However, TRINITY #4 centers around Wonder Woman.

Superman, Batman, and Wonder Women are held captive by Poison Ivy in TRINITY #4, which transports them to the past. Lois finally finds them and her missing son, but Poison Ivy attacks her. Meanwhile, the trio travels to Wonder Woman’s homeland, Themyscira. Upon entering, they are threatened by sisters of the Amazon Princess. Wonder Women tells them that she is one of them, but her sisters don’t believe her. Just as she is about to be attacked, a young Diana appears and protects Wonder Woman with her armor.

READ: Need to catch up? See our TRINITY #3 review!

The former tells her sisters that violence is not the answer and that the trinity should be tested by performing life-threatening games. Wonder Woman is familiar with these games, so she warns Superman and Batman that they are extremely challenging. However, they win the games effortlessly. I felt misled by Manapul since I was expecting more action from this sequence. Perhaps, the lack of action implies that the trinity is invincible? However, the cliffhanger in the end of the issue, which I’m not going to spoil, makes up for the missing action. 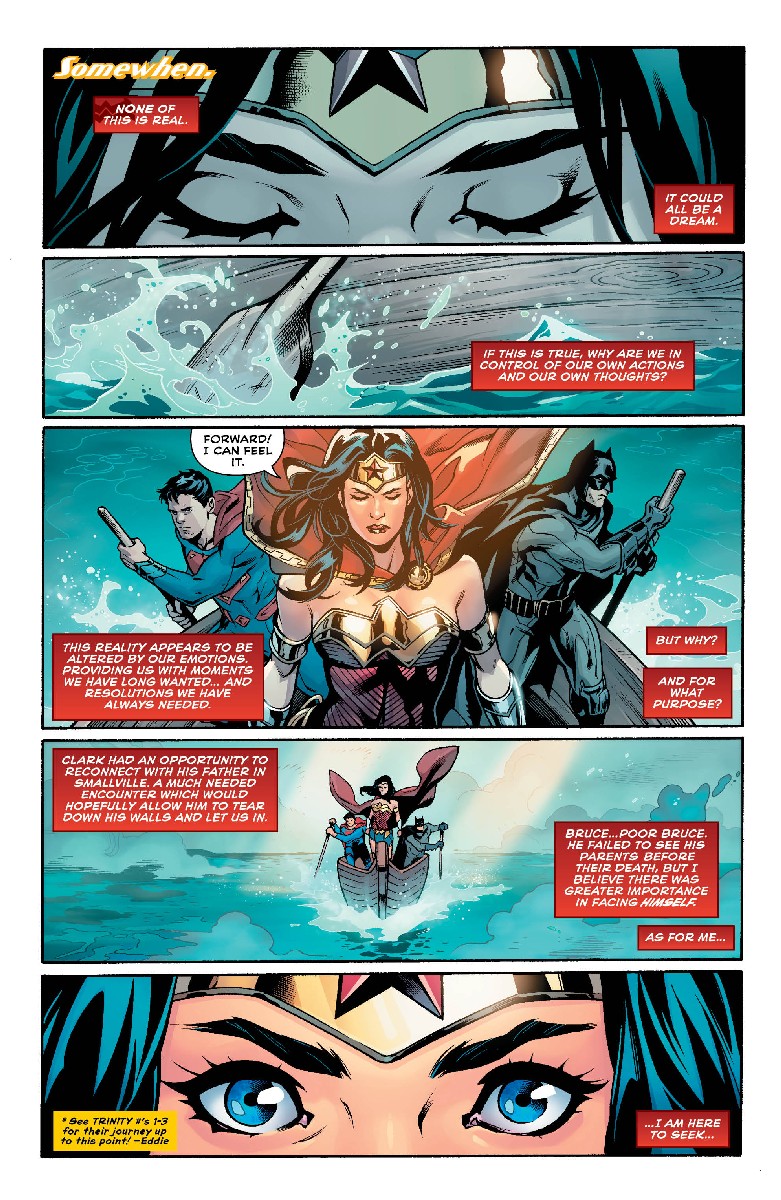 Although Superman, Batman, and Wonder Woman pass the test, only Wonder Woman is allowed to stay due to the rules of Themyscira. Superman and Batman have to go to the Dark Quarters — the hell of Themyscira. Wonder Woman decides to accompany her friends despite her yearning to stay back. Her characterization is the highlight of the entire issue, and Manapul did an outstanding job with her dialogue. She is portrayed as an outsider who has been longing to go back home for years. Themyscira is the place she has known the longest, where her entire childhood was built. Despite taking on the mission she wanted and being an influential figure in man’s world, there is no place as sweet as home. As much as she wants to believe that this is real, she knows it’s not, and it’s impossible not to have sympathy for her.

Young Diana’s wisdom and kindness makes her just as admirable as her older self. The former feels a strange connection to the latter, and seeing them bond is heartwarming. In a sequence where the trinity is on a raft heading to the Dark Quarters, young Diana gets on the raft and asks Wonder Woman why she returned to Themyscira. Wonder Woman then holds young Diana’s hand and their luminous lassos shimmer, revealing the truth to young Diana. Superman and Batman are bystanders throughout the issue as Wonder Woman communicates in a dialect that they don’t understand. 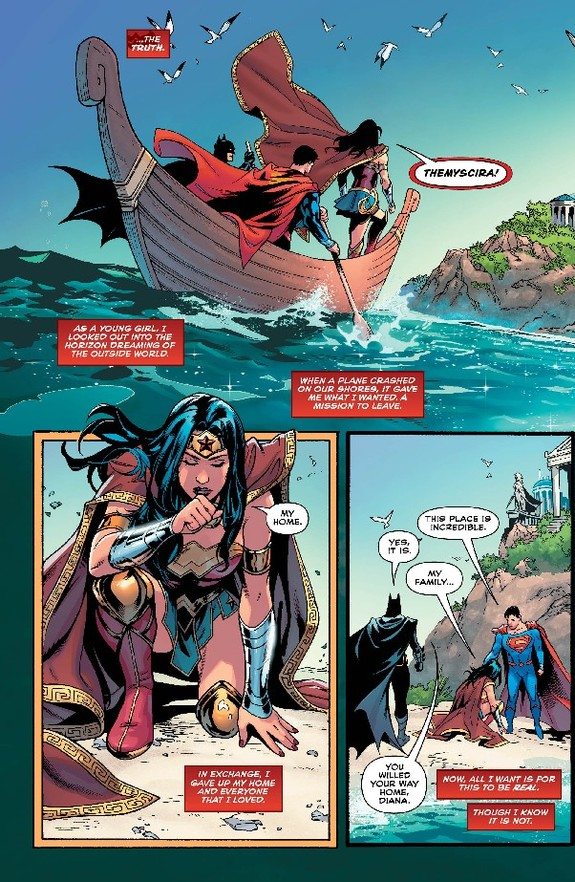 Emanuela Lupacchino did a spectacular job 0n the artwork of TRINITY #4. Themyscira is portrayed as an enchanting island with soft golden sand and exotic trees, which gives the installment a heavenly feel. The passage to the Dark Quarter, on the other hand, looks like a transit to hell. The gloomy sky reflects on the river, giving the sequence a frightening appearance. The ferocity in the Amazon sisters and the pain in Wonder Woman’s eyes are beautifully drawn. Superman and Batman are clueless throughout the issue, which is also visible in their facial expressions.

TRINITY is notable for its in-depth character analysis of DC’s iconic superheroes, and TRINITY #4 did a great job in the characterization of Wonder Woman and the artwork of her beautiful homeland. Thus, TRINITY #4 is an amazing read, and I am eagerly looking forward to what’s about to unfold in the next installment.