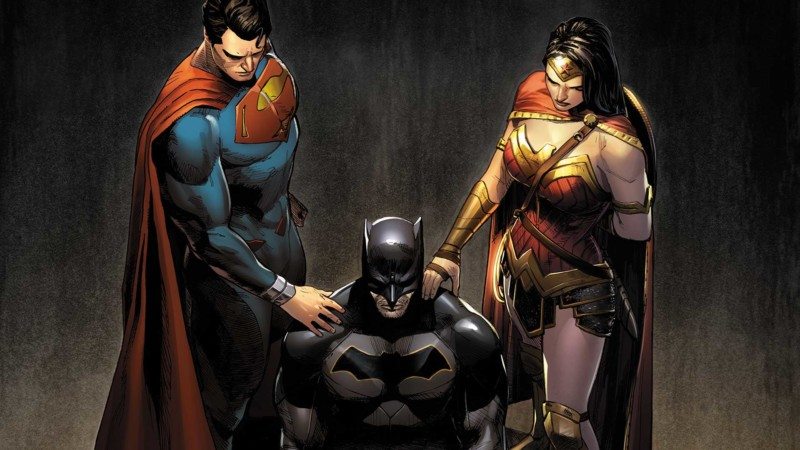 Teamwork makes the dream work. When Superman, Batman, and Wonder Woman team up, dreams are bound to come true, and so are nightmares. TRINITY does a spectacular job in exploring the friendship of DC’s iconic trio while they are mysteriously transported to another world. The last two issues focused on Superman, but TRINITY #3 focuses more on Batman.

What sets JUSTICE LEAGUE apart from TRINITY is that this series is more about the emotions felt by the characters and less about action. Batman usually tries to hide his feelings behind his tough demeanor, but he fails to do so in TRINITY #3. In the previous issue, the trinity found themselves back in the past, due to a trap of Poison Ivy’s, and Superman had an opportunity to visit his deceased dad and younger self. Batman gets the same opportunity in this installment as they go back to Gotham City on the night Bruce lost his parents. While Superman’s reunion with his father felt like a dream, Batman’s revisit to his childhood turned out to be more like a nightmare.

READ: Need to catch up? Take a look at our review of TRINITY #1!

Superman, Batman, and Wonder Woman are still confused about how exactly they’ve turned the wheel of time. They were simply having dinner together when Superman heard noises from the barn, and then they were suddenly thrown into the past. Although Wonder Woman speculates in this issue that there must be a bigger purpose, she is oblivious to the fact that Poison Ivy is holding them captive. This was revealed in TRINITY #2, but TRINITY #3 only briefly goes over that in the end when Lois catches Poison Ivy red handed. The issue emphasizes more on Batman and his childhood fears. I don’t mind, however. I’m really enjoying where the story’s been going so far, as I’m getting a better understanding of who these characters are. Poison Ivy can wait. 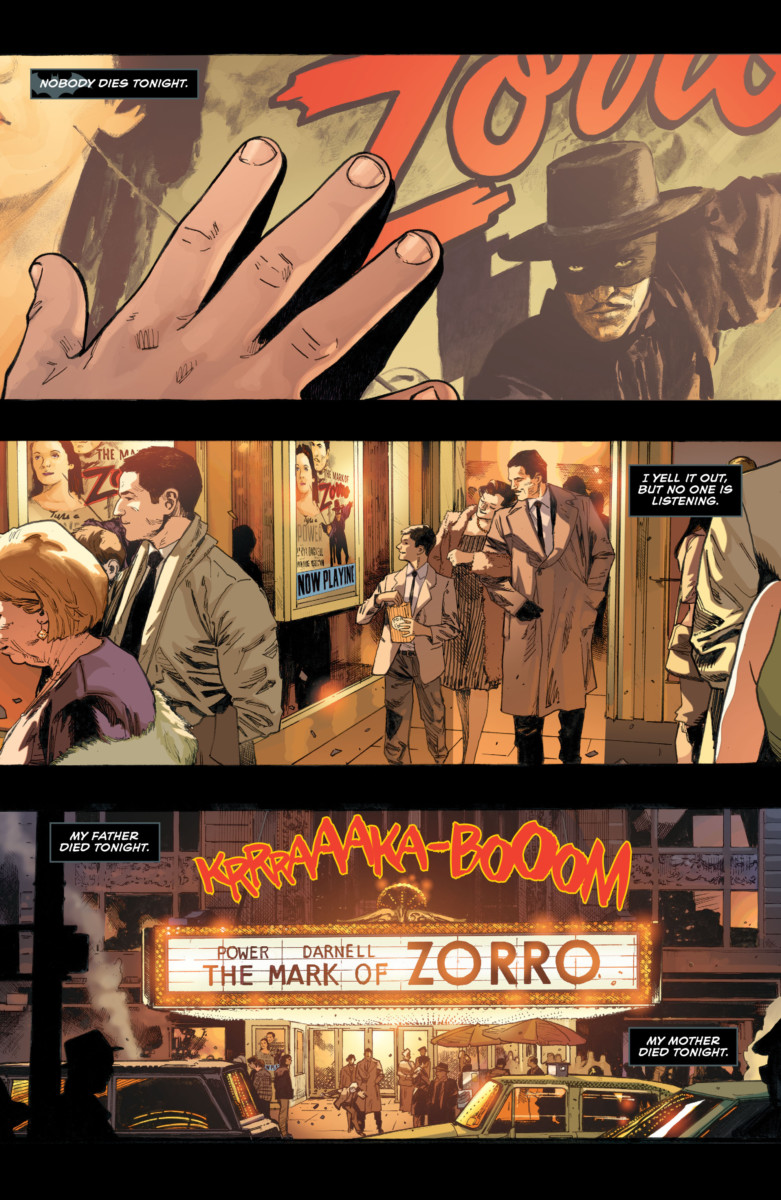 In Gotham city, Young Bruce speaks to a doctor about his traumatic experience and is prescribed medication. After returning home, Alfred offers his words of wisdom, but young Bruce demands to be left alone after taking his medicine. Young Bruce then calls Alfred and is terrified to see a monster in a horse instead. The monster is actually Alfred, but young Bruce’s medicine has a strange, spellbinding effect on him. The trinity saves young Bruce and Clay Mann depicts this beautifully in his artwork. While they’re carrying him, in one-half they look like themselves; in another, which is young Bruce’s perspective, they look like demons. Wonder Woman realizes that young Bruce is actually under a spell and she breaks it.

Young Bruce then confesses that he holds himself responsible for the death of his parents. His habit of self-accusation doesn’t go away; as Batman also blames himself for the deaths of Jason Todd and Tim Drake. To escape from his overwhelming guilt, he avoids being around the people whom he loves the most. He tries so hard to appear strong, but he fears that because his allies know him so well, they might be able to see his vulnerability. Fortunately, Batman has amazing friends as they remind him that the deaths of his friends and family aren’t his fault. 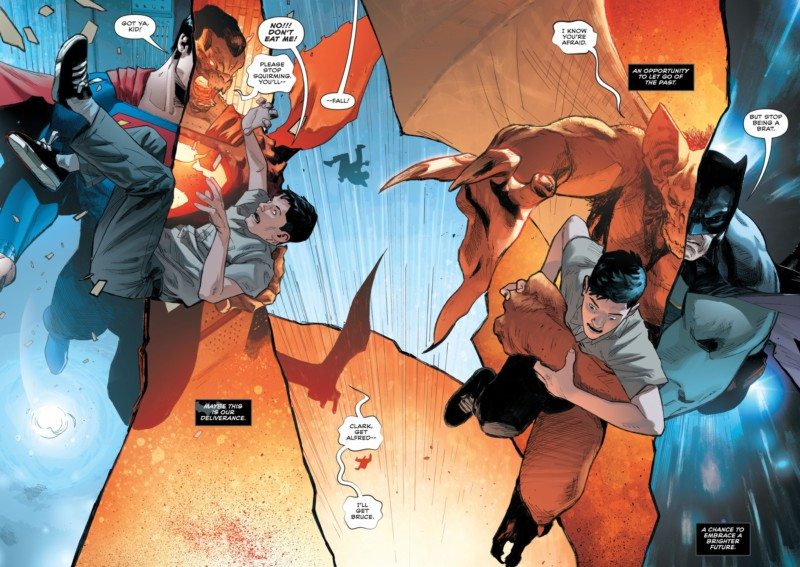 READ: Love seeing DC superheroes team up? Take a look at our article about the first trailer for JUSTICE LEAGUE DARK!

In the last two issues, Francis Manapul did both the writing and the artwork, and he did a splendid job. His art has a dreamy, nostalgic feel which is also noticeable in his other works, such as JUSTICE LEAGUE. I was a bit upset when I found out that Manapul was only doing the writing for TRINITY #3, but I changed my mind after reading it. The tone of the third issue is completely different, as it’s set in a grim and harsh Gotham City with a focus on Batman. Thus, Mann’s artwork is more gloomy and has a touch of realism. The best part is that, although the artwork is so different from the previous issues, it doesn’t feel off. Rather, it perfectly aligns with the darker plot. 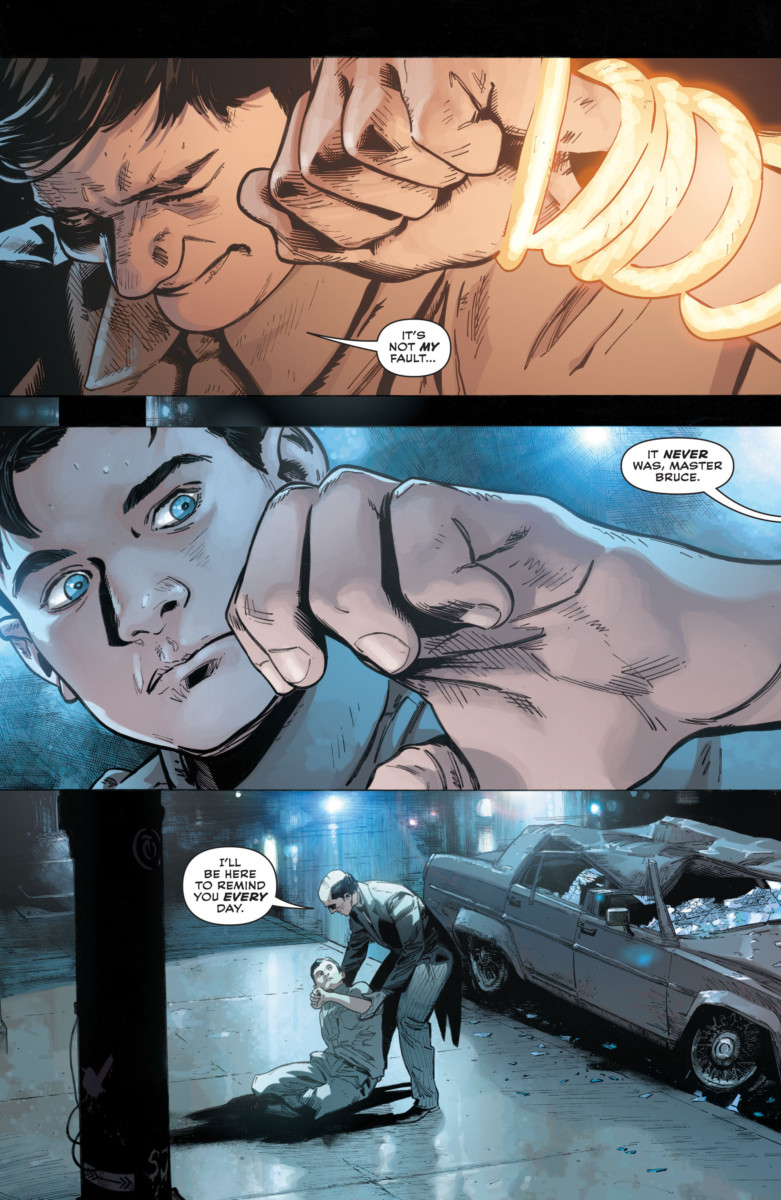 What disappointed me a bit were the extremely wordy panels in a few of the pages. Batman goes on long rants about his fears, but it’s unnecessary for Bruce to spell out his phobias as they’re made pretty obvious throughout the issue. However, that’s my only complaint with this installment as it’s a minor detraction from an otherwise flawless chapter.

Overall, TRINITY #3 is a deep, mysterious, and gorgeous issue. It’s beautiful to look at, and to read as well. I highly recommend reading it if you’re a nerd like me who’s obsessed with in-depth character analysis. I’m eagerly looking forward to the next installment!