Since the beginning of Rebirth, and the re-introduction of the pre-Crisis Superman (or as I like to call him, Superman), DC’s heroic trinity of Batman, Wonder Woman, and Superman have had very little interaction. Sure, Clark has received help from Diana against Doomsday in ACTION COMICS and he’s currently punching earthquake machines near the core of the earth for Batman in JUSTICE LEAGUE, but that all seems like very surface level stuff. There has been an undercurrent of mistrust which stems from the appearance of this ‘new’ Superman, but it’s never been fleshed out. TRINITY #1 aims to tackle those issues and build the ground work for a new friendship between these three icons.

LISTEN: We talk about Batman, Wonder Woman and Superman in this ComicsVerse podcast!

As writer and artist for this series, Francis Manapul has quite the daunting task, taking on these legendary characters and breathing new life into how their dynamic works. Fortunately he handles both sides of the creative process admirably and creates one of the most gorgeous books to grace the Rebirth line. With TRINITY #1, he decides to take things slow, with this issue more focused on friendship, trust, and history than on superheroics. Indeed, there is very little in the way of action in this book, and that is no bad thing. There is only a handful of characters in this issue and it makes for some honest, intimate reading. 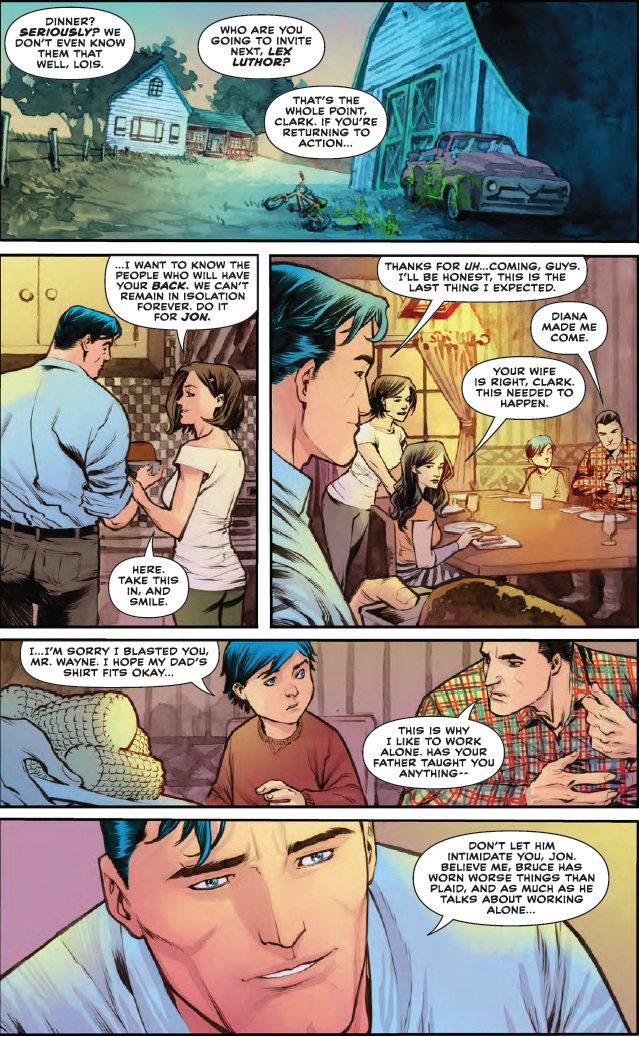 Lois has invited Diana and Bruce over dinner so they can know this ‘new’ Clark better (and she can see just who he’ll be dealing with). Although initially hesitant, Clark warms to this idea, and reminisces about the pre-Crisis Batman. This moment alone is worth the price of the issue, as we get a glimpse of a silver age Batman in a rainbow-colored Batsuit! The splash page of Batman in a multi-colored cowl should look ridiculous, but Manapul’s use of framing and colors makes it a striking image.

READ: The Trinity have had some awesome adventures as part of the Justice League. Check out our JUSTICE LEAGUE essential list here!

Manapul’s artistic work here is outstanding. His use of paint mixed with more modern coloring gives the whole issue a somewhat nostalgic, dream-like feel to it. He keeps the pages controlled, with steady paneling. When he does let loose with a splash page, he makes each image unique: Wonder Woman, carrying a dead boar over her shoulders, the framing behind her the shape of a golden eagle, the design of her breastplate; Batman descending from the Batplane, the line panels in the form of the bat symbol; and Superman emerging from the barn, the S-symbol framing his ascension. It’s all beautiful stuff which feels huge and epic juxtaposed with the smaller paneling on the rest of the pages. 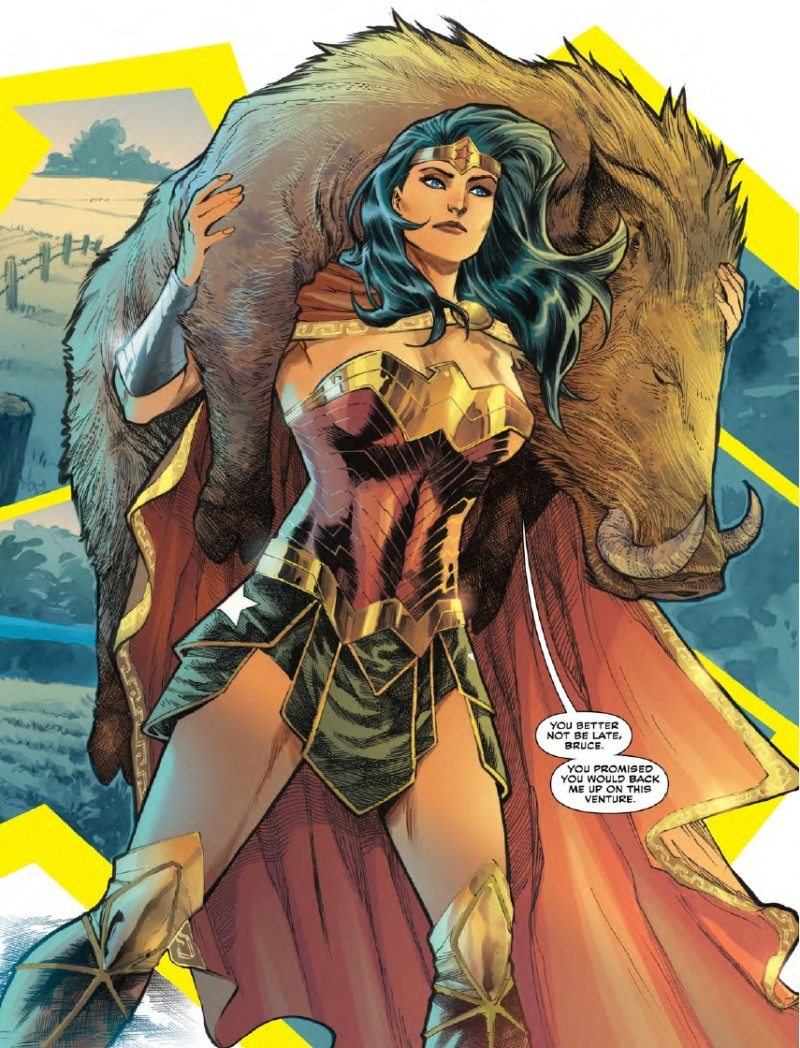 Each character in all the say and do feels right too. Diana has a lost look in her eyes, and later reveals why to Lois later in the issue. This makes reference to her own adventures in WONDER WOMAN. She is strong and confident, yet her eyes betray hidden emotion. Manapul’s Superman is full of hope and earnestness. Clark is quick to open up and begin trusting these versions of heroes he once knew. Bruce is aloof and cold, with a dark hard glare in his eyes. At times Manapul’s depiction of Bruce felt a bit too harsh, but as you read on, you are reminded of just why Bruce is so skeptical.

READ: Catch up on WONDER WOMAN‘s series with our review of #6!

This issue is a slow burner, and it needed to be. It’s trying to re-establish a bond between three heroes that know each other, yet are perfect strangers. The cliffhanger didn’t 100% grab me, but it didn’t matter. I am sold on the journey these characters are embarking on; to become friends, heroes, and the Trinity once more.