TRESPASSER is a Sci-Fi graphic novel from indie publisher Alterna Comics. Brilliantly written by Justin M. Ryan with art by Kristian Rossi, TRESPASSER tells a simple yet intriguing story. A man named Hector, his daughter, Maria, and their dog live in seclusion after a nuclear catastrophe leaves society in shambles. Despite being on the edge of starvation, they live a peaceful life. However, a wounded alien found in the middle of the woods, changes their world. Hector’s decisions onward will haunt his and Maria’s life as they continue to face disease, hunger, and the unknown. The end of the world is a powerful force, but the love between a parent and his child is stronger. 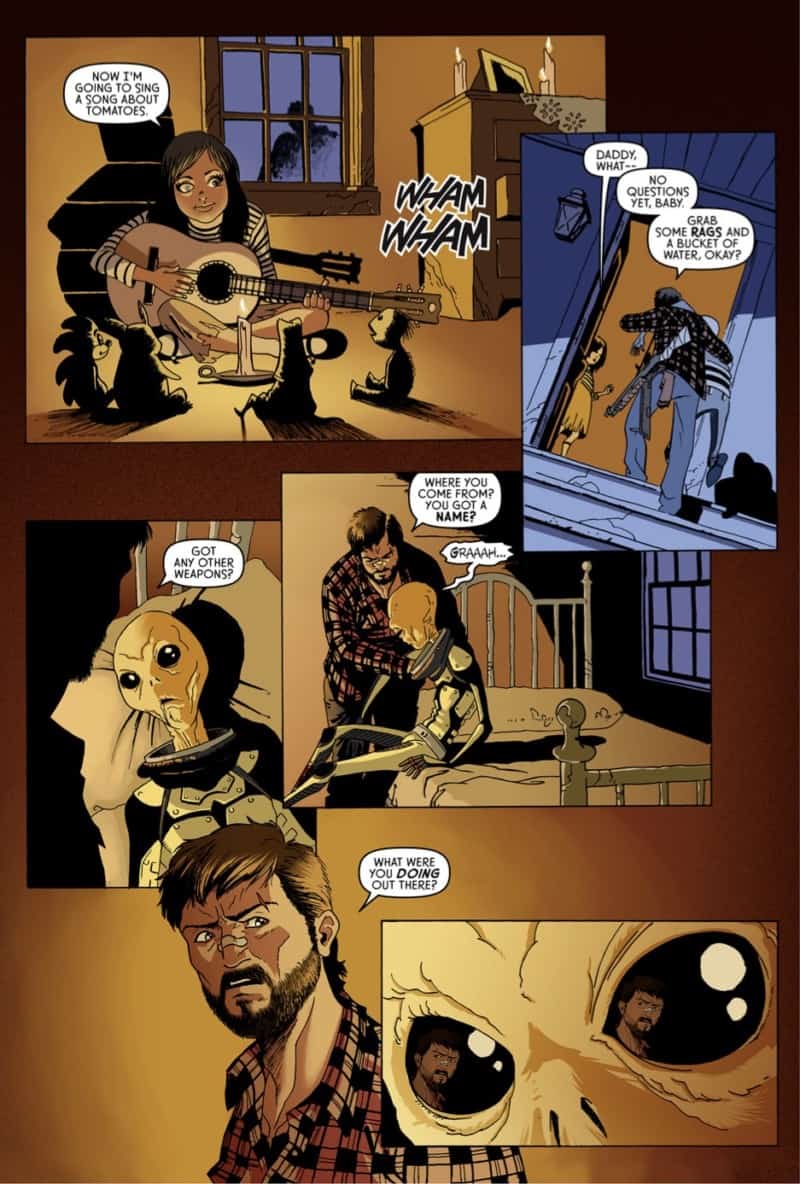 It’s difficult to talk about the plot without giving something away. The comic’s most exciting moments come from its mystery and surprises. I will say that Hector makes a questionable decision in the first chapter that comes back to haunt him and his daughter. This causes Maria to loose some trust in her father, while Hector tries to correct his mistake in the face almost certain doom.

Ryan and Rossi bring this amazing tale to life by thinking like filmmakers. Even if that wasn’t their intention, it certainly shows in their work. The whole story is told through speech bubbles and images; no inner monologues or narration. Ryan and Rossi give us the same amount of information as the characters, allowing the reader to relate to the uncertainty and fear felt by this small family. Like any good scriptwriter, Ryan doesn’t rely on flowery language or quotes from some classic novel. Instead, he creates sympathetic characters with real strengths, flaws, and history before challenging them to their breaking point.

Hector is a survivor, a soldier, and a father. A lesser writer would have taken just one of these traits and let it define his entire character. Ryan, however, puts Hector into situations that test his strength in each of these roles to the fullest extent. When he discovers strange boils on his body, his first instinct is to make sure Maria isn’t suffering from the same disease. He asks Maria to check herself in the mirror, but as a father, it’s his duty to make sure she isn’t scared. He turns this into a game; trying to get Maria back in the house as quickly as he can.

When aliens come knocking on his door, he lets his soldier side take over. He becomes a bit harsher, but life-and-death situations demand clear orders and sharp wits. Sometimes this frightens Maria, but he’s sure to comfort her after the storm clears. 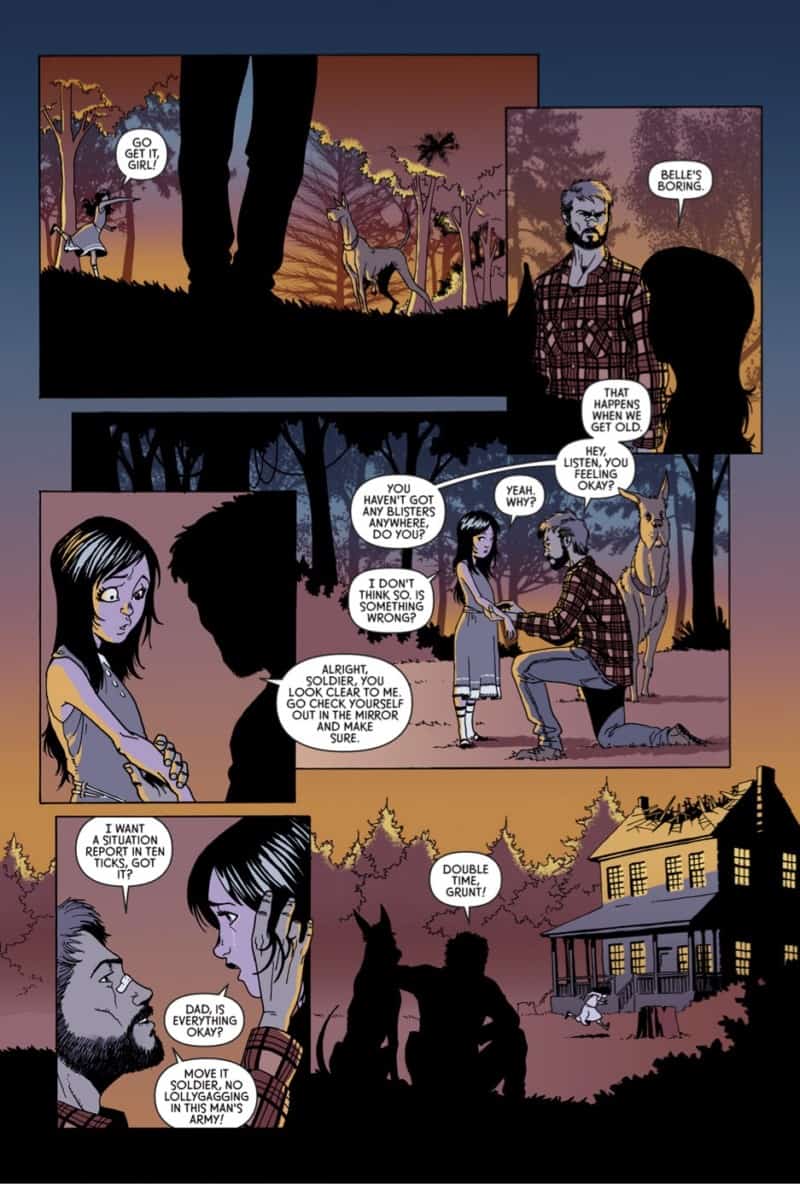 Maria is a fleshed-out character in her own right, as well. Like a real child, she’s inquisitive, playful, but she lets her emotions get the better of her.  You’ll want to see her safe almost as much as Hector does. I don’t want to go too deep into the details of TRESPASSER, as the mysteries and surprises are what make this comic so entertaining. However, I will say, Hector and Maria do find themselves in danger, it’s a nail-biter, to say the least.

The artwork is equally brilliant in small, subtle ways that aren’t apparent at first. The lighting is particularly clever. Instead of willing light and darkness into scenes for the sake of an effect, Rossi makes sure every shadow and angle has a purpose. For example, there is a scene where Hector approaches the alien with a lamp. This gives us a better look at the titular trespasser, giving us a clue to his intentions as we attempt to read his facial expressions. Hector, on the other hand, is cast in shadow. We already know he’s a good man, but his shadowy appearance tell us that his mind is in a dark place. 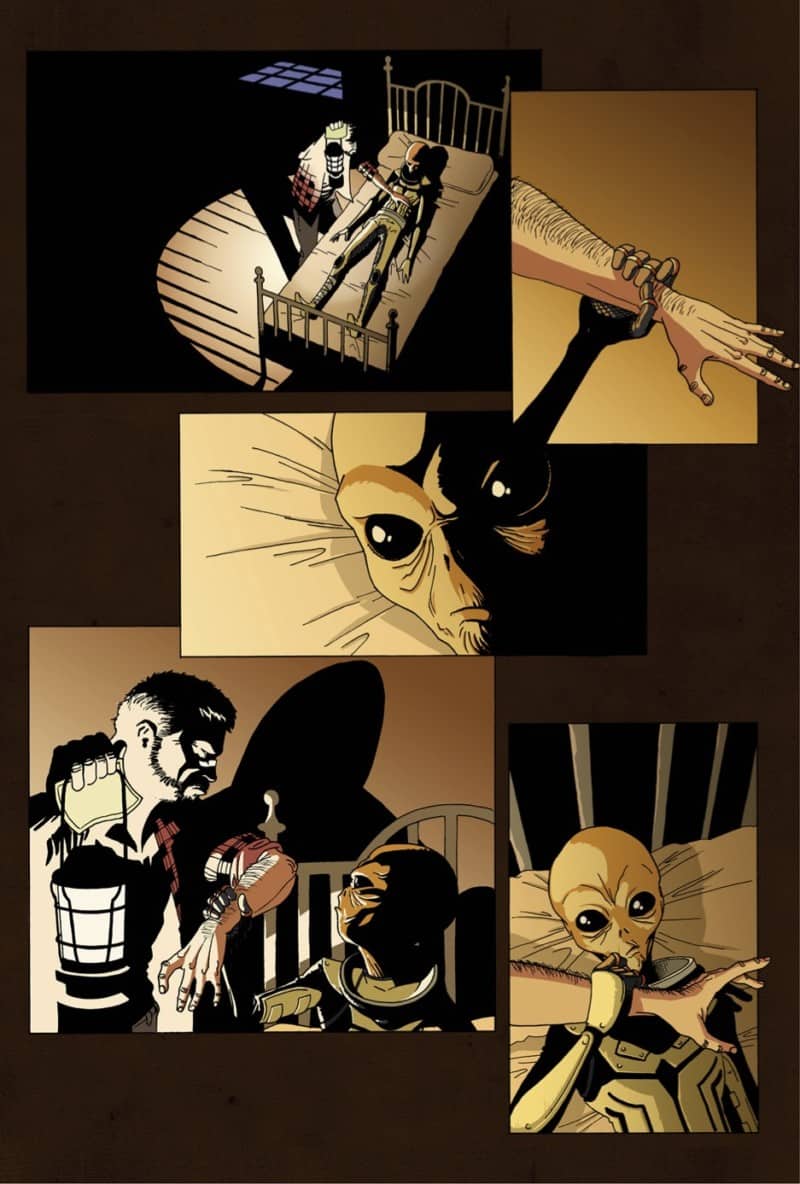 Rossi draws the characters and backgrounds with realistic proportions. Movement also stays within the realm of physical possibilities. All this maintains the feeling of watching a live-action movie or TV show. Still, Rossi takes advantage of the comic medium. He exaggerates facial expressions to highlight the characters’ emotions. The color scheme will change to represent the mood of a scene. All of these decisions help the reader feel emotionally invested in the story, without betraying the overall style.

It’s refreshing to see a story do something a little bit different with the post-apocalyptic setting (Although TRESPASSER’s inspirations are clear). While the subject matter is naturally tied to darkness, cynicism, and violence, Ryan wisely lets themes like trust, regret, and parenthood take center stage. My only gripe is that it didn’t come out sooner, as it would have been a perfect Father’s Day gift.

TRESPASSER is currently sold out at Alterna’s official site (This may change, of course), but you can still buy it on ComiXology.