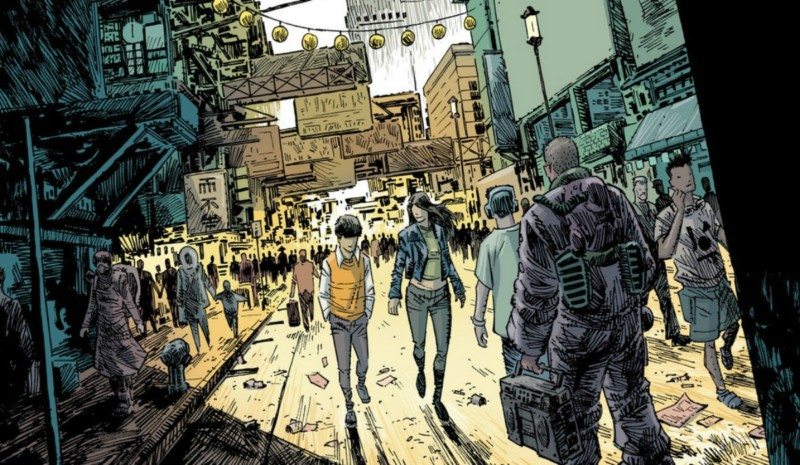 Despite the progress made by the LGBTQ community in the last decade, the majority of media is still created with either a mainstream audience or a queer audience in mind. Now that mainstream media has become more inclusive of queer characters, both types of media can serve as an introduction to LGBTQ issues. However, it is unlikely that a person who is either unfamiliar or uncomfortable with LGBTQ people would purposefully consume media specifically marketed towards a queer audience.

It’s important that mainstream media represent the lives of queer people because this media can serve as a bridge between the LGBTQ community and those outside it. Queer characters are more frequently and accurately represented in mainstream media than ever before. However, it can still be difficult for creators to fully represent the struggles faced by queer people without alienating their straight audience. The sci-fi comic TREES, created by Warren Ellis and Jason Howard, manages to pull this off successfully.

READ: What did we think of the ROCKY HORROR remake? Click to find out!

TREES takes place in the near future, 10 years after giant pillars have landed on Earth’s surface. Humanity is still adjusting to the presence of the extraterrestrial megaliths, which they call trees. The comic follows several different storylines at once, each exploring an anecdote about life on Earth after the trees’ arrival.

One of these anecdotes follows a young Chinese man named Chenglei, who moves from his village to a city under one of the trees. The city, Shu, is walled off from the rest of the country and people must pass through a military checkpoint to gain access to it. Through an exchange Chenglei has with a soldier at the checkpoint, the reader is lead to assume that Shu is in a place that no one would want to live. However, once Chenglei enters Shu, it is revealed that the city is akin to a utopian artists’ colony, where a vibrant LGBTQ community has flourished. 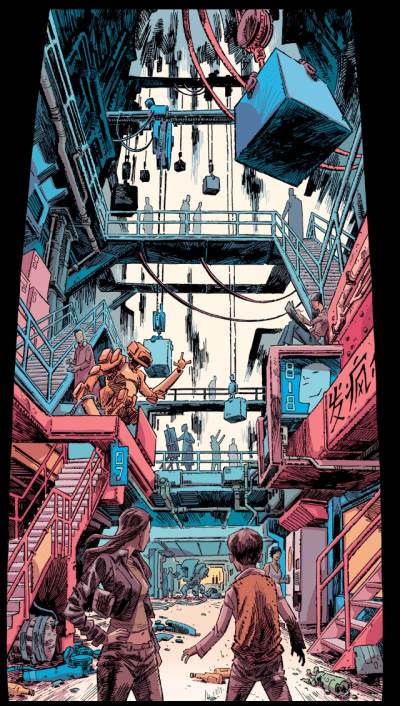 Chenglei spends his first few days in Shu within the confines of his apartment, drawing what he can see from his window. His landlord eventually sends Zhen, an outgoing transgender woman, to check up on him. After coaxing him out of the apartment building, Zhen takes Chenglei around the city and introduces him to her friends. After a night of partying, Chenglei reveals to his landlord that he moved to Shu because he was questioning his sexuality. He also tells his landlord that he is pretty sure he is falling in love with Zhen.

After Chenglei tells Zhen how he feels about her, they begin pursuing a relationship. A short time later, Chenglei runs into the guard he met at the checkpoint, who urges him to leave the city because the “experiment” is over. Chenglei ignores this mysterious warning and he and Zhen remain in Shu while the military begins an aerial attack on the city, presumably killing them both.

It’s worth mentioning that the killing of queer characters has become a problematic cliché in mainstream media. Despite this, TREES is still a notable example of queer representation done right. Here’s why:

1. TREES not only prominently features a transgender character, but also explores what it’s like to be transgender.

Bridging the gap between a straight audience and a queer audience entails explaining queer terminology. Not only does TREES feature a transgender woman, but she eloquently and simply explains her gender identity. 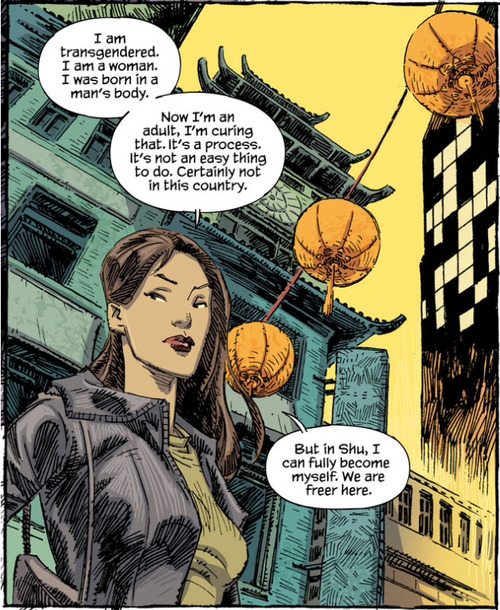 Although this may be redundant for some readers, this is directed towards a wider audience who may not fully understand what it means for Zhen to be transgender. Explaining this terminology helps the reader understand who Zhen is within the context of the story. Additionally, it can also give a reader who is unfamiliar with transgender people an understanding of who they are in the real world.

The reader is first introduced to Zhen and to the fact she is transgender while she is standing in her doorway in lingerie. This introduction could easily be criticized as objectifying, but it actually tells the reader a lot about Zhen’s personality. Zhen is not ashamed to show her body because she lives in an environment that fully accepts her. It is not a secret in TREES that Zhen is a transgender woman, because Zhen’s safety in Shu is not dependent on her ability to pass as cisgender.

TREES also grapples with what it’s like to be a transgender person in a relationship. After Chenglei and Zhen have sex for the first time, Zhen fully expects him to reject her. She confronts him with the excuses that she expects to hear from him: that he was confused, that he was drunk, etc. It is likely Zhen has faced sexual partners who have reacted defensively before. This is a reality that both pre-op and post-op transgender people must deal with. When do you tell someone you’re transgender and how will they respond to this information? Transgender women are particularly concerned with this question, since their coming out to potential sexual partners can lead to violence against them.

2. TREES leaves space for those still figuring out who they are.

When Chenglei reveals that he is questioning his sexuality, it does not make a future relationship with Zhen any less complicated. It is unclear what it means for a cisman who thinks he might be gay to be sexually attracted to a pre-op transgender woman. 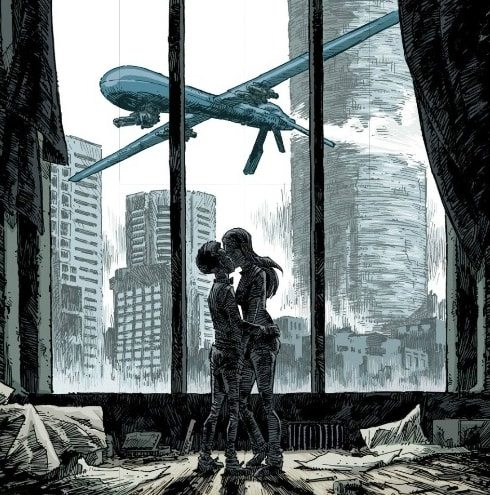 Chenglei’s struggle to label his sexuality serves as an example of how labels can be complicated and even controversial within the LGBTQ community. Some queer people engage in discussions about what labels should and should not be considered legitimate. Other queer people refuse to label themselves at all.

Yes, labels can be a vital part in figuring out one’s own sexuality or gender identity. But ultimately labels are only as important as we make them. If someone who is questioning is not quite ready to categorize themselves, that’s perfectly okay. Chenglei’s love for Zhen is not invalidated by the fact that he’s not quite sure if he’s gay, straight, bisexual, or something else. In TREES, Chenglei is given the space to explore his sexuality, without the pressure to define himself. Even though he is not sure who he is, Chenglei is still welcomed into the LGBTQ community and is still capable of pursuing a relationship with Zhen.

READ: Speaking of labels, is ORANGE IS THE NEW BLACKS’s lack of labels lazy or intentional? Click for our take!

3. TREES demonstrates how the LGBTQ community continues to live under the threat of violence.

The constant military presence within Shu demonstrates that all is not perfect within the city. Although queer spaces are safe spaces where people are free to express themselves, they are fragile. Space that is dependent on trust and mutual respect can easily be violated by outsiders with bad intentions.

This omnipresent threat of violence within Shu is not unlike what queer people experience on a daily basis. Although queer spaces like Shu do exist, the majority of the world is not so accepting. Queer people have to constantly watch what they say and do, or their lives could be in danger.

Shu is eventually destroyed by the military, signaling the end of the experiment. It is not clear exactly what the experiment was, but the reader can assume that it had something to do with the tree. Most likely, the government was studying the effects the tree had on those living within the walled city. This serves as a reminder of how the LGBTQ community has been subjected to systematic violence. From police brutality at Stonewall to the AIDS epidemic, the powers that be have historically turned a blind eye to both violence committed against queer people and the problems that they face. 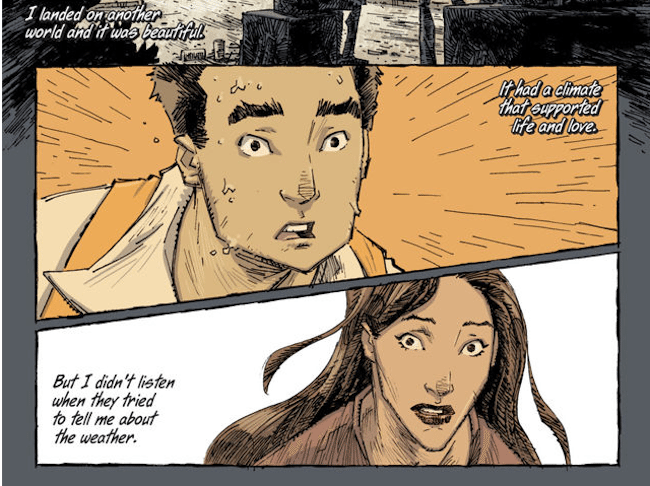 Despite the military presence and the unknown effects of living near the tree, people continued to flock to Shu. The dangers of living in the city were outweighed by the freedom of living there. Similarly, there is an inherent risk in being out as a member of the LGBTQ community. Like living in Shu, these risks are mitigated by the need for a community in which people feel loved and accepted. TREES shows that regardless of the danger, queer people will continue to proudly gather together to support one another.

TREES should serve as an example to other creators as how to incorporate meaningful dialogue about queerness in media that is not directly marketed towards LGBTQ people. This anecdote is brilliant because it engages the reader wherever they might be. On one hand, we have a concise introduction to what it means to be transgender and some of the problems transgender people face. On the other hand, we have a commentary on the role of labels within the LGBTQ community and the need to welcome those who are questioning their sexuality. Whether the reader knows nothing about LGBTQ people or is a member of the LGBTQ community, they can walk away from TREES with a meaningful insight about the lives of queer people.