We are one step closer, y’all. Just about a month before D-Day, and now we’ve got something to show for it: a trailer. It sounds like nothing when you put it that way, but we know how momentous this occasion is. (We did our wait, 12 years of it, in Azkaban!) And if that weren’t enough, our favorite GAME OF THRONES-obsessed publication Entertainment Weekly blessed us with a deep dive into the season eight setpiece Battle of Winterfell. So let’s talk about it!

The Trailer Heard ‘Round the World

We open on the panicked face of the usually unflappable Arya Stark. She pulls it together and runs. Through the halls of Winterfell, she fled to an unseen pursuer. Meanwhile, Ser Davos readies his armies and Varys to take refuge with women and children. “I know death,” Arya’s voiceover says.

“He’s got many faces. I look forward to seeing this one.”

Cut to: the Golden Company setting sail on Euron Greyjoy’s ships, led by a blonde man. Tormund, Beric, and Dolorous Edd are apparently not dead. “Everything you did brought you to where you are now,” (possibly) Bran’s voiceover says,

In King’s Landing, Cersei is looking suspiciously happy flanked by the Mountain and Qyburn. “…Home,” says the voiceover, as we smash-cut to Jon and Dany bringing the Unsullied into Winterfell. Dragons fly over Sansa’s head, a look of wonder and apprehension gracing her face. “They’re coming,” Jon’s voiceover says as he and Dany meet in the crypts (appropriately lit in icy blue and warm firelight).

Gendry makes a brief appearance in a blacksmith’s shop. Jorah Mormont rides a horse nervously. Missandei and Grey Worm share a classic “last kiss before he goes off to war” moment. Jaime gets a nice color contrast, bathed in red and orange as he fights something or someone. We cut to Cersei on the Iron Throne, as if that’s what’s truly on Jaime’s mind. She is in such a long shot that we can’t make out who is in the room with her, but the following shot is another suspiciously joyous look on her face. Rhaegal and Drogon go for a joy ride through the North.

Whether it is actually at that sight or not, Arya looks up in awe while other Winterfellians bustle about in a tizzy. Grey Worm gears up for battle as Jon visits Weirwood and the Hound faces his worst enemy — fire. “I promised to fight for the living,” Jaime’s says to someone offscreen.

“I intend to keep that promise.”

Jon and his men run into danger (nothing new there) and Arya reaches for her sword menacingly.  Jon and Dany visit the dragons, looking like the weirdest happy little family, and Sansa looks worried. Arya kicks-ass and takes names with some waterdancing, while Dany stays out of the fray for a moment of contemplation. Tyrion looked worried and then we don’t see him again. Then we’re shot in the face with a fire-breathing dragon (thank god trailers aren’t in 3D). The troops are holding their ground with Brienne and Pod at the helm. Some undead horse hooves clack on the ice, staring down at a distant Winterfell. “GAME OF THRONES, the Final Season. April 14.” Fade to black.

…But What Actually Is Going On?!

The trailer racked up more than 81 million views in its first 24 hours. This completely shattered previous records for HBO’s trailers. (The season seven trailer scored only 61 million views on its first day.) Unsurprisingly, fans have dissected every shot and frame in search of secrets. But HBO knows how to guard those secrets. The trailer mostly features clips from the Battle of Winterfell and certainly nothing from after that episode. People will die in that battle, that much is for sure, so anything from that point on would be considered a spoiler. That doesn’t mean we can’t throw some stuff at a wall and see what sticks! Let’s see what, if anything, we can glean from these 114 seconds.

The Light Is Coming

Redditor u/ascitien posted a brightened version of the trailer, shining both literal and metaphorical light on the new footage. As the darkness lessened, some salient details shone through. We can see what Arya is running away from — likely wights, specifically newborn wights since they don’t seem as undead as they could be. We will also get a better look at Jorah’s weapon of choice. The sword is more clearly Heartsbane, the Tarly family’s Valyrian steel sword. Sam brought Heartsbane to Winterfell and he and Jorah are pals now since he cured Jorah’s greyscale.

Sam likely gifts the sword to Jorah, a superior fighter, but there could be another explanation. The giant Entertainment Weekly story that dropped last week mentioned a scene in which Sam wields a sword against wights. It doesn’t say which sword, but it would make sense for it to be his family’s heirloom. Could that mean that something happens to either Jorah or Sam, and the other picks up Heartsbane? Is it a bequeathing scenario or something less deadly?

Who’s That Blonde Man in the Trailer?

So what’s up with that mysterious blonde man running one of Euron’s ships? The internet, unsurprisingly, has theories. The dominant thought is that the actor is Marc Rissmann, whose casting as Harry Strickland was leaked last year. Strickland is a commander in the Golden Company, so this would track with what we know. But a more obscure theory posits that he is actually Young Griff, aka Aegon Targaryen, aka the long-lost child of Rhaegar Targaryen and his first wife Elia Martell. In the books, Young Griff brings the Golden Company to Westeros to marry Dany and rule the Seven Kingdoms together. There is very little evidence on the show to support this theory, but it certainly would be a dramatic twist. 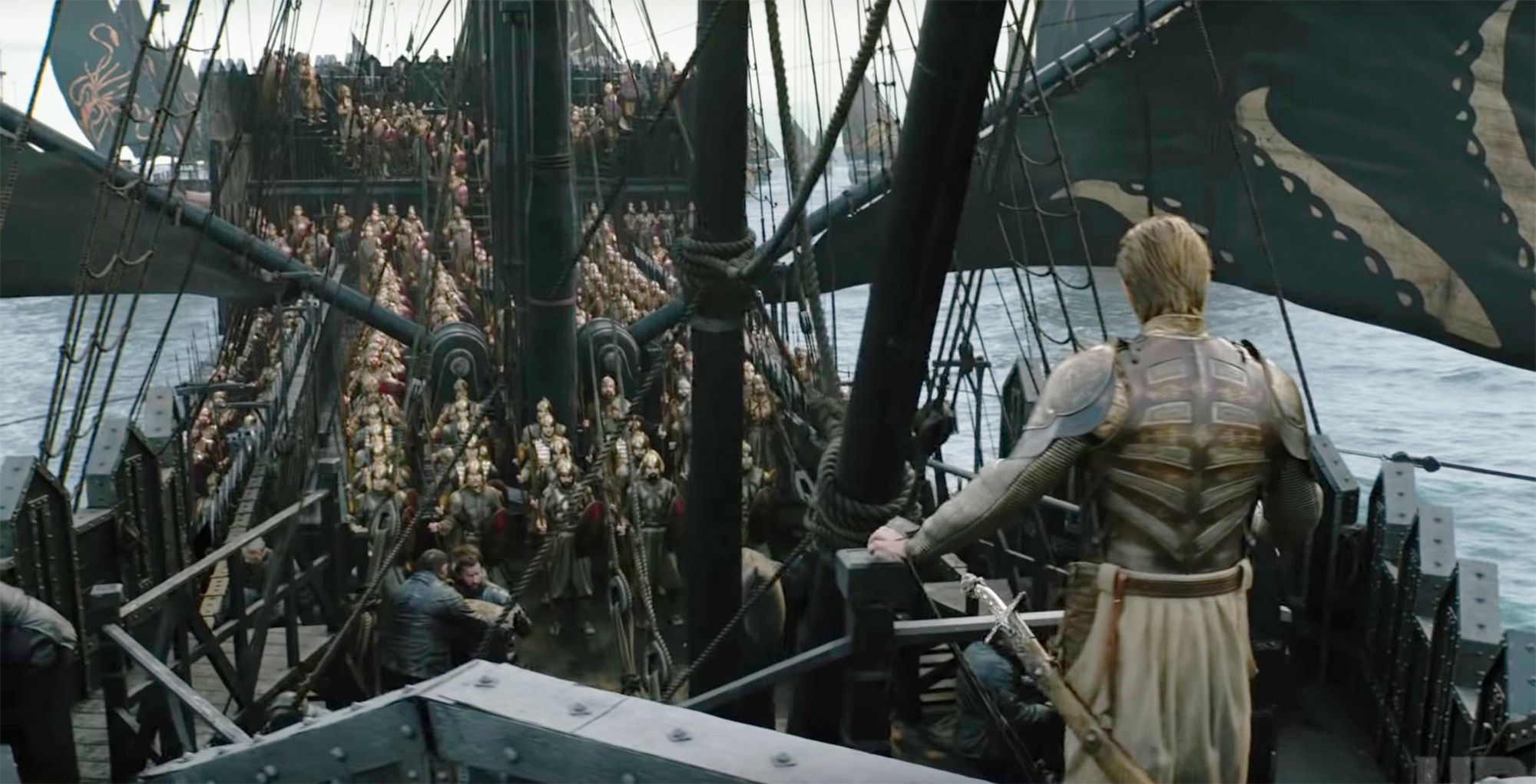 Beyond the Trailer: The Battle of Winterfell

Professional GAME OF THRONES Fanatics Entertainment Weekly published a mega-GoT issue last week, complete with 16 collectible covers. James Hibberd’s cover story details a visit to the set in April 2018. The Battle of Winterfell was the production du jour (and by “jour” I mean “55 jours”). Like we said before, anything post-battle would inevitably include spoilers, so it makes sense that this historic action sequence (action episode, really) is the focus of pre-season coverage.

We know that the Battle of Winterfell is going to be groundbreaking. It’s basically the only thing we know for sure about season eight. But the true magnitude of the episode’s action is the stuff of legend. According to EW, the Battle of Winterfell will be ”the longest consecutive battle sequence ever committed to film, and brings the largest number of GoT major characters together since the show’s debut episode in 2011.” The reigning longest action sequence is from LORD OF THE RINGS: THE TWO TOWERS, clocking in at 40 minutes. The episode could be upwards of 90 minutes.

Shooting the battle took 11 weeks, encompassing 750 working through the night. Liam Cunningham (Ser Davos) said that the crew had been hitting 40,000 steps on their pedometers during those weeks. He also said of the crew, “They’re the f–cking heroes,” which is something we should all remember when we appreciate the show. It takes a village to make a show like GAME OF THRONES, so we have nothing but respect for all the folks behind the scenes of this madness.

In terms of the real information that we’ve learned about season eight, EW is like the library of Alexandria. We learned a handful of actual facts and even some meaningful insight from the creators. We now know that this is Arya Stark’s first GAME OF THRONES battle. (Of course, we could’ve figured that out from the trailer, but that’s beside the point.) Even though she is ready to fight at any time, Arya has never actually seen the front lines.

And lucky for Maisie Williams, this was also the hardest battle shot to date. Iain Glen (Jorah Mormont) said, “It was the most unpleasant experience I’ve had on Thrones,” which is saying something for a character like Jorah. Even those behind the scenes agree: “If Miguel [Sapochnik, director] lives through this it will be the hardest thing he’s ever done,” executive producer Bernadette Caulfield said, “the hardest thing all of us have ever done.”

Even so, Sapochnik remains dedicated to making the episode as meaningful as it is action-packed. The extent of the battle could easily overwhelm narrative cohesion or character development, but Sapochnik kept the importance of plot and character in sight. He asked himself two major questions for every part of the action: “Whose story am I telling right now?” and “Why would I care to keep watching?” In the hands of a less concerned director, a 40-plus minute action sequence could be a hot mess.

But with what we’ve learned from this EW feature, it looks like we’re in for one hell of an episode.

A Picture’s Worth a Thousand Words

In addition to the cover story, EW has blessed us with 20 new character portraits from photographer Marc Hom. They are staged photos, not photos from the actual set, but they certainly revealed each character’s defining qualities and what we can expect to see from them in season eight. Check them all out here.