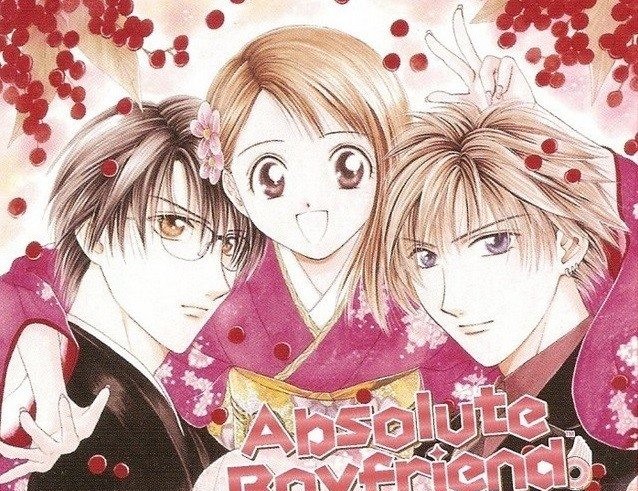 I’m a huge fangirl, and boy, do I love a good love story. I’ve mentioned it before; romantic comedy is my favorite genre, so naturally shoujo (comics aimed at young women) is my favorite genre of manga. I can’t get enough of the cheesy plot lines that draw two totally opposite characters together. I bite my nails wondering if two main characters will ever get together (they will, of course!), and I cry when they fight or when the second male lead doesn’t get the girl. Maybe I’m a little too emotionally invested in fictional characters, but I can’t help it. I’m a romantic, and, as much as I enjoy shounen (comics aimed at young men), shoujo is my go-to.

Among my anime and manga-loving friends, sharing recommendations for shoujo and shounen manga is common. Although I have trouble picking favorites, some of the ones I’ve read have a special place in my heart. The following are the three shoujo manga that I think everyone should read. 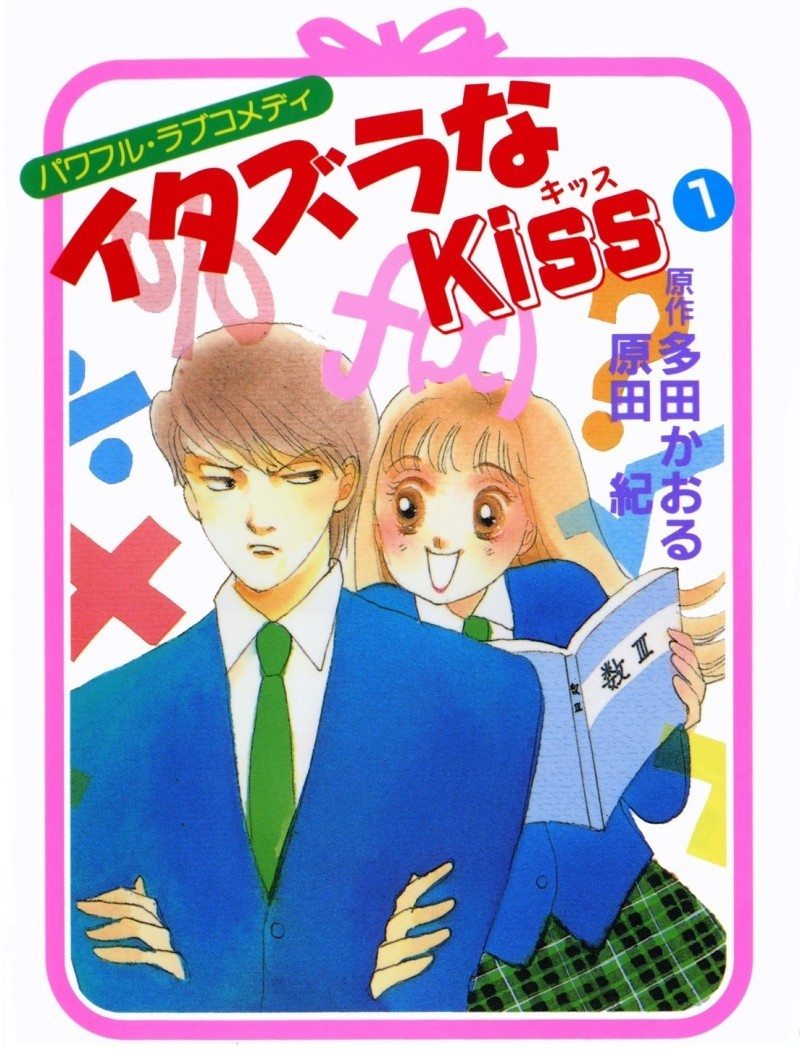 PLAYFUL KISS by Kaoru Tada is my favorite shoujo manga of all time. It’s got everything: an interesting plot, humor, heart-wrenching moments, and beautifully-written romance. The story follows Kotoko Aihara, a teenager who has spent the past four years pining over fellow high school senior Naoki Irie. While Kotoko is cute, she doesn’t have much else going for her. She is clumsy, unintelligent, and generally a failure at school.

Naoki, on the other hand, is brilliant. He is a star tennis player, and he scores number one on the national exams each year. Kotoko is absolutely in love with Naoki, and she decides to confess her feelings to him. He immediately rejects her, thinking that he is too good for a moron like her. Kotoko, crushed and embarrassed, wants nothing more than for him to return her feelings.

After losing hope, Mother Nature acts as her wingman and causes an earthquake to break down her house. Her father decides that they should move in with an old friend until they can rebuild their home. Well, it just so happens that this old friend is Naoki’s father! Kotoko and Naoki are forced to live under the same roof, and though Naoki wants nothing to do with Kotoko, she isn’t ready to stop believing that they can be together. 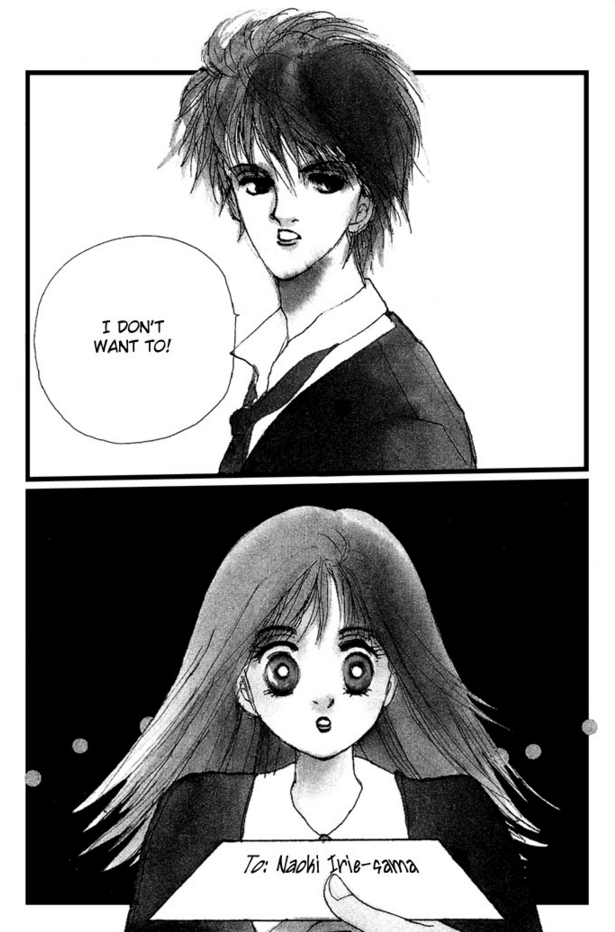 I absolutely adore this manga. Though it’s a bit old (it was first published in 1990), it’s still great to read today. I cry every time I read it, especially at the cheesy parts. Sadly, it was never finished because the author died, but every chapter is as good as the one before it. It’s been adapted into a ton of Asian dramas, and if you aren’t satisfied with the lack of a proper ending, you could always watch the dramas that complete the story: MISCHIEVOUS KISS and MISCHIEVOUS KISS: LOVE IN TOKYO. 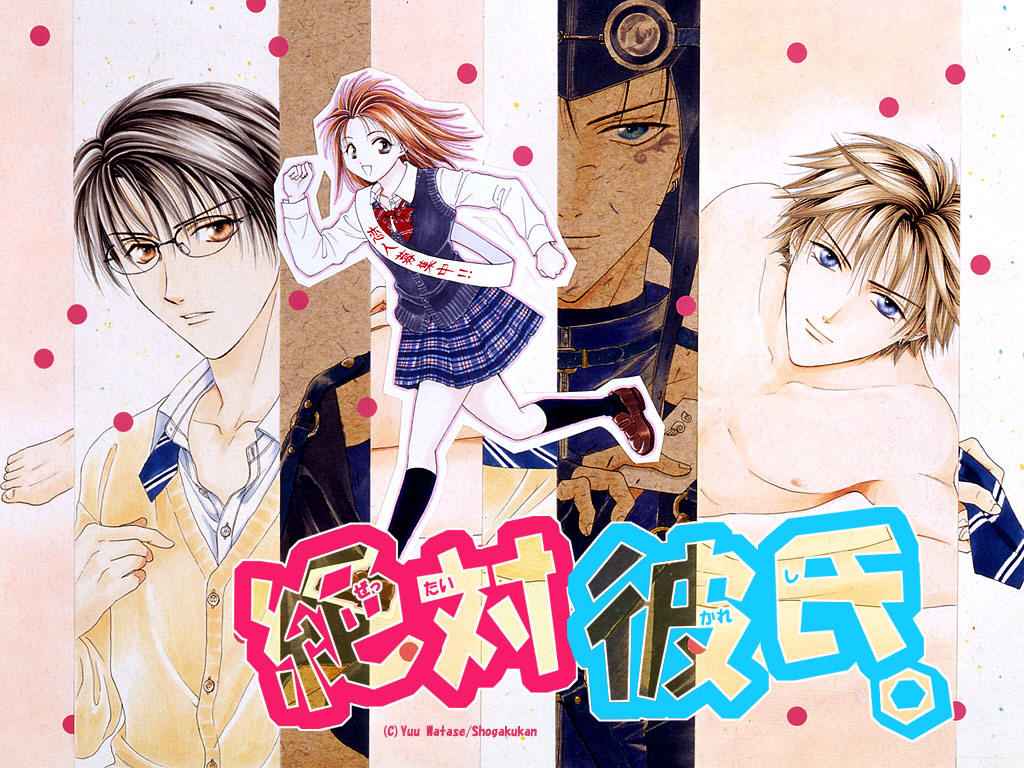 The next manga on my list is ABSOLUTE BOYFRIEND by Yuu Watase. I almost wanted to put this in first place because I love it so much! This manga not only has an adorable romance and (dare I say it?) sexy male characters, but it honestly makes you think about technology, the future, artificial intelligence, and robotics on a level that you may have never considered before.

The plot follows Riiko Izawa, a victim of unrequited love. Every time she has liked a guy, they have rejected her. Having gone her entire life without a boyfriend, Riiko is sick of being alone. By chance, she meets a mysterious salesman who says he works for a company that can help her. His company, Kronos Heaven, has a new service that they have chosen her to test; on their website, you can design your ideal lover.

Riiko doesn’t take it seriously and thinks it’s some sort of game, so she accidentally orders a robot boyfriend named Night. Knowing that Riiko can’t afford Night, the salesman makes her a deal: participate in a study of how the new Kronos Heaven robots interact with their human girlfriends, and she’ll get to keep him for free. Riiko has to navigate her work and social life without letting anyone find out Night’s true identity as a robot and while trying to manage his over-affectionate programming. 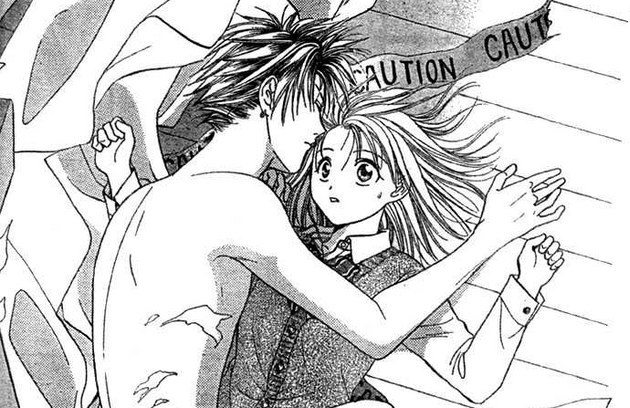 I love how this manga questions human-robot relations and makes you wonder whether or not such interactions would be moral or not. It also does a great job of raising questions about whether robots could overcome their programming and make their own intelligent decisions. These types of issues will become more and more important to talk about as society progresses technologically, and as a sci-fi nerd, I can’t get enough of the way the author applied a serious issue to a ridiculous and entertaining plot. I wish this manga was longer, because Riiko and Night’s relationship is both hilarious and heartbreaking. I swear, I have never laughed and cried more in my life than when I read this manga. Anyone who likes romance or technology would enjoy ABSOLUTE BOYFRIEND. I can’t recommend it enough! 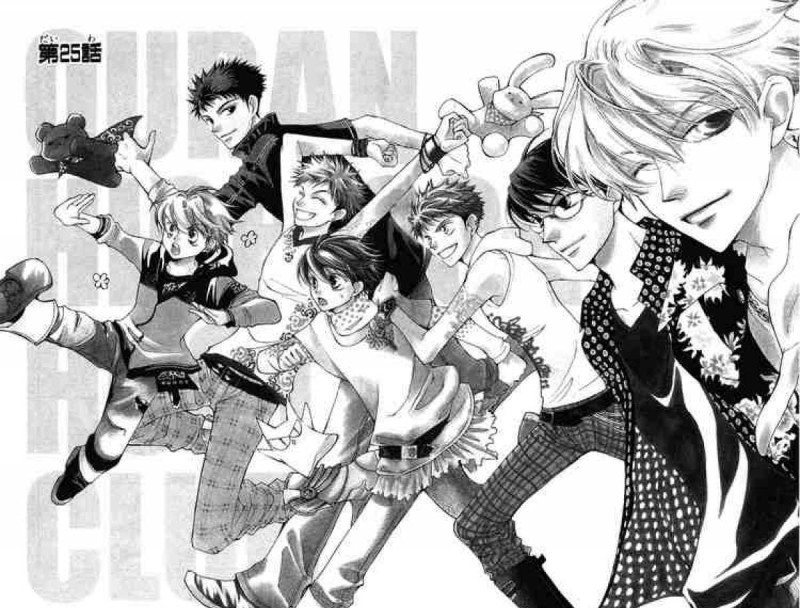 The plot of OURAN HIGH SCHOOL HOST CLUB is great. Haruhi Fujioka is a brilliant teenager who gets a scholarship to the elite Ouran High School. After she wanders into an empty room while looking for a quiet study spot, she accidentally breaks a vase worth ¥8,000,000 (roughly $80,000). Turns out, the vase and the room belong to the school’s host club, and in order to repay them, Haruhi has to work as a host (if you don’t know what host clubs are, click here). Things are complicated by the fact that members of the club think that Haruhi is a boy due to how she dresses.

Though Haruhi is fairly gender fluid and doesn’t mind romancing women, she is still an introvert, and has to overcome her opposition to the new world of host clubs. Things are further complicated when Tamaki Suoh, the club’s president, starts crushing on her. He is my favorite character in the manga because of how funny and crazy he is, although the other characters are great, too. It’s definitely hard to pick favorites. 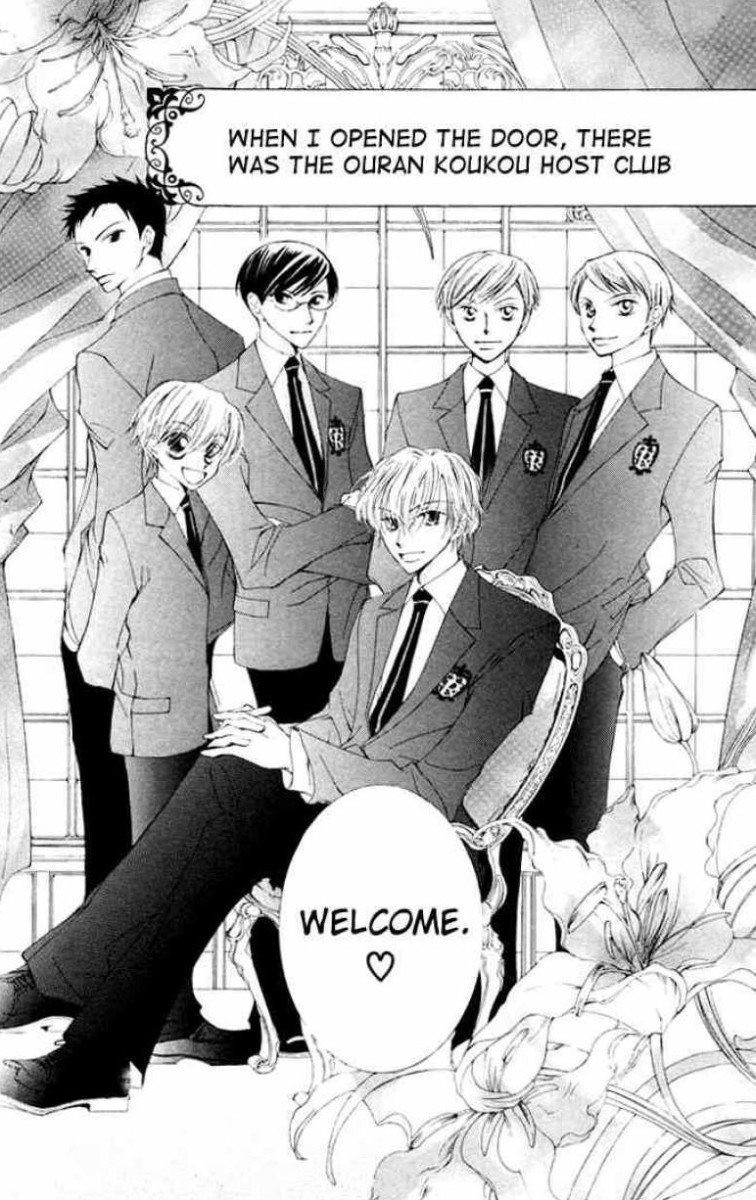 I love how diverse this manga is. This is probably the best-known out of all the manga on my list, and for good reason. OURAN HIGH SCHOOL HOST CLUB brings up a ton of important issues, like gender, identity, sexuality, poverty, and wealth. As a feminist, I am thrilled at how this manga seems to be pro-homosexuality and how it represents women as equally smart as the men around them. I wish there were even more progressive manga like this!

WATCH: Looking for more great things to read? View our video on five indie graphic novels to watch out for this year!

The cast of characters in this manga is diverse and hilarious. All of the members of the host club have something unique about them, and their backstories are great. I especially like how the different members of the club interact with one another, creating a group of interesting individuals who work as a team, yet each have their own skills. The romance between Haruhi, Tamaki, and the other characters is adorable, and you’ll fall in love with each character as you read more. If you are new to manga, this is a good one to start with! 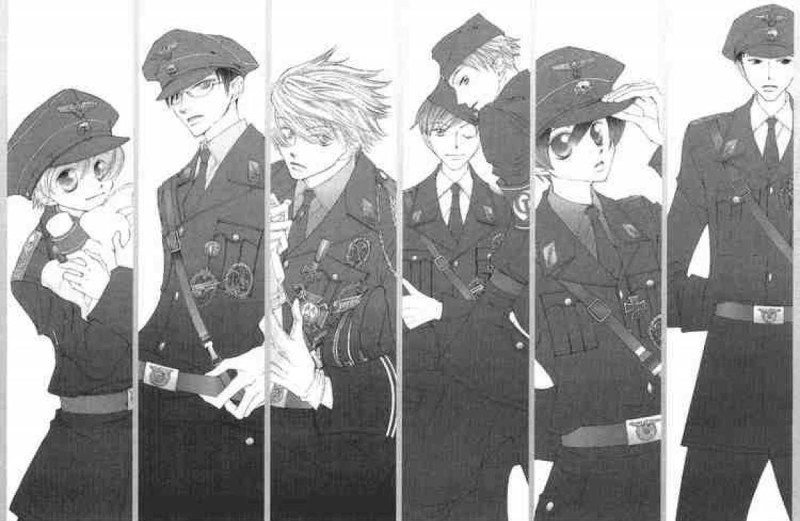 All of these manga have multiple versions in anime and drama form as well, all of which I recommend! I’ll link my favorites here:

And there you have it! I love these manga and their adaptations dearly, and I think that anyone, regardless of age or gender, can enjoy them, too. Maybe you’ll even become a fangirl like me!