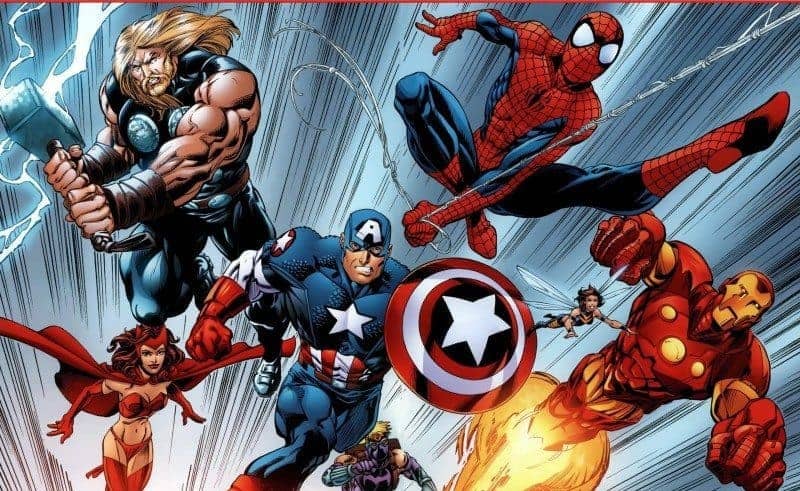 In case you haven’t heard, Marvel has recently been given the go-ahead by Sony to use Spider-Man in the Marvel Cinematic Universe.  What this means is that, firstly, we can expect to see Spider-Man in Captain America: Civil War.  More on that here.

Creative rights for Spider-Man solo films and spinoffs remain in the hands of Sony, but Kevin Feige is on to co-produce the next Spider-Man movie.  Whether or not he’ll be involved in the spinoffs- Sinister Six, Venom, and that as-of-yet unrevealed female solo movie- remains to be seen.  Apparently, Marvel and Sony are also considering ways to bring other Marvel characters into the Spider-Man films.  This could mean crossovers and team-ups all over the Marvel Cinematic Universe.

Spider-Man has always been a popular character, and he’s had a lot of great team-ups over the years.  Here are our choices- in no particular order- for the top team-ups we hope to see between Spider-Man and the Avengers… and the rest of the MCU!

Captain America and Spidey have a great relationship.  It’s best illustrated in Fallen Son: The Death of Captain America. Fallen Son shows us Peter’s memories with Cap.. particularly one battle in which Peter and Cap battle against the Hulk. We know we’re going to see a super beefed-up Iron Man battle the Hulk in Age of Ultron, but how could would it be to see what it would take for Captain America and Spider-Man to defeat the Hulk?  This could conceivably happen early in the upcoming Captain America: Civil War, introducing Spider-Man as a hero that gets his butt rescued by Cap, who holds off Hulk until the Avengers arrive. From there forward, we could get the new-to-this Spider-Man torn between allegiance to Cap and Iron Man.  Of course, many know that if Civil War is true to the comics, then Cap is supposed to die at the end.  Which would be particularly painful for Peter, whose life Captain America had saved.

Likeliness: Spider-Man will almost definitely appear in Civil War in some way.  What the details are remains to be seen.

Part of the charm of the Spider-Man animated series from the 90’s was the way that the cartoons crossed over with each other- it wasn’t uncommon to see Spider-Man appear in the X-Men cartoon, or the Fantastic Four show up to help Peter with something.  One of my favorite characters that used to appear on that show was Daredevil.

With Daredevil, Spider-Man had a really cool relationship.  The two were allies who shared a mutual respect, even though they didn’t always see eye-to-eye.  That’s a common theme with some of these superheroes- they meet, they fight, they find a common enemy, and then join up.  What’s cool about this pair is that they both deal with street justice in New York City, so their paths cross pretty often as they track down the same villains at times.

What this could mean for the MCU?  Well, Daredevil season one will be up on Netflix in a few months, and there’s plenty of room for further seasons.  If The Owl is a villain, we could see the classic team-up from Marvel Team-Up #73.  Perhaps we could also see some appearances in later episodes of Iron Fist, Jessica Jones, or Luke Cage?  It could happen, right?

Likeliness: Maybe an appearance here and there.

3. Spider-Man and the Avengers

Well, since Spider-Man WAS an Avenger, that pretty much says it right there.  For at least Captain America: Civil War, Spidey will be working with the Avengers.  Could we see him in the Infinity War movies?  Or perhaps beyond that?

Keeping in mind that Spider-Man is still going to need his own solo films, it’s likely that the Avengers will make him an honorary member.  He’ll get to stick to New York City’s problems, but be at the ready for when the world needs him.  With Thanos threatening all of reality, that time may be rapidly approaching. He appeared in the pages of Infinity Gauntlet, after all.

Likeliness: If Marvel really goes all out for Infinity Gauntlet, I don’t see why not.

These two have a complicated history.  Black Widow is one of the first superheroines to test Spider-Man’s abilities, using her spider-fighting techniques against his.  This could be a pretty cool training scene for Spider-Man.  Or perhaps after seeing P. Parker on the Hydra screens, Captain America sends Black Widow to bring in Spider-Man. This could even lead to that Hulk fight I mentioned earlier.

When they’re not fighting, Spider-Man and Hulk have been known to team up, even on smaller, more street-level adventures.  One memorable adventure is when Hulk helped take down Chameleon.  Considering that Chameleon has been one of the Sinister Six, it could be a cool way to introduce that character for use in future Sinister Six sequels. On a side note, Chameleon has also confessed his love for Peter Parker.  That would be an interesting thing to see, too.

Though Spider-Man doesn’t often wander into the mystical realm, but when he does, he assists the Sorcerer Supreme.  From Baron Mordo to Xandu to Dormammu (man, Doctor Strange’s villains have some fun names), Spider-Man always finds a way to help Doctor Strange restore order across the magical realms.  We probably won’t see Spider-Man popping into a Doctor Strange movie anytime soon, and to be honest, unless Benedict Cumberbatch brings a whole new life to the character, Doctor Strange would be a, well, strange choice to put into a Spidey flick.

Likeliness: Probably not going to happen

With a movie coming up, the pressure is on, and the question is back- how will the world handle this new Marvel title? If Ant-Man finds a fandom, then I, for one, would love to see a sort of bug-hero partnership.  It’s perfect- they even hyphenate the same way!

What’s cool is that one of their team-ups is against a character know as Taskmaster.  Many people believe that Taskmaster has already been introduced on Agents of S.H.I.E.L.D. as Grant Ward… but time will tell if that’s true.

Likeliness: Probably won’t happen soon, but tell me that wouldn’t be pretty cool.

8. Spider-Man and Howard the Duck

Well, they introduced Howard in Guardians of the Galaxy.  Who’s to say that he won’t zip through an Asgardian stream and end up on Earth at some point?  Heck, for all we know, that’s exactly what happened in George Lucas’s take on the foul fowl.  These two have partnered up surprisingly often.  Howard has a fan following, and that post-credit scene got a lot of attention, so maybe we can expect to see more of Howard.  Why not in a Spider-Man movie?

Ok, a few more words: these two share a very bright intellect, which bonds the two from the start.  We’ve seen Iron Man help Spider-Man with a number of villains- and vice versa!  It could be a cool move for an Iron Man Four- if they can get Robert Downey Jr. to do it.  On the other hand, an Iron Man appearance in the next Spider-Man could draw in the crowds that Sony has been hoping for.  They don’t need to hire Robert Downey Jr for the role- especially if they leave him in the suit during his time in the movie.  I think, though, that Robert Downey Jr. should be involved if they’re going to use it, and I think many people would agree.

Likeliness: If Robert Downey Jr.’s on board, I think they’ll do it.

How could the Iron Man Trilogy have been better?  Click to find out!

Whatever happens, it’s certainly a great thing to have Spider-Man back in the MCU.  However he gets used, and whichever character he meets, the one thing that is for sure is that fans are rejoicing to see one of Marvel’s most popular heroes in one of the most popular movie series of all time.  Unfortunately, Disney hasn’t yet acquired the rights to Saturday Night Live or Ren and Stimpy… so I guess that’s two crossovers we definitely won’t see.

Or will we?  Are those negotiations happening yet?