I often like to compare comic books to food. SUPERMAN is a plain bagel (simple but good, the standard), BATMAN is pumpernickel (dark and brooding, but with mass appeal), and HELLBOY is an everything bagel covered with glitter and fireworks and fake vampire teeth (badass, dangerous, and more interesting than what you get in most breakfasts).

HELLBOY has been a mainstay of the comic book world since its debut in 1994. The series’ success and the character’s iconic status are no an accident. Creator Mike Mignola’s unique vision for HELLBOY pieces itself together from a wide range of artistic, pop culture, and literary influences. Unlike many other superhero series, HELLBOY maintains its freshness over time by distilling the best aspects of every genre and putting a unique spin on each of them.

Now, here are the top 5 influences in the first two volumes of HELLBOY.

The first two volumes of HELLBOY put the titular hero up against a surprising series of nemeses. He faces off against a real colorful cast of mutated or biomechanically enhanced Nazis and an evil wizard version of imperial Russia court advisor Rasputin. Mignola understands that this is not the first time a hero has faced off against Nazis, so he heightens the stakes by making them incredibly strange and fleshing out their backstories. These volumes skillfully interweave real historical events with over-the-top science fiction. Rasputin is especially interesting in this regard because his place in history has always been nebulous. Mignola leverages the real-life cult (literal in this sense) following Rasputin to provide readers with a touchstone within the HELLBOY universe. 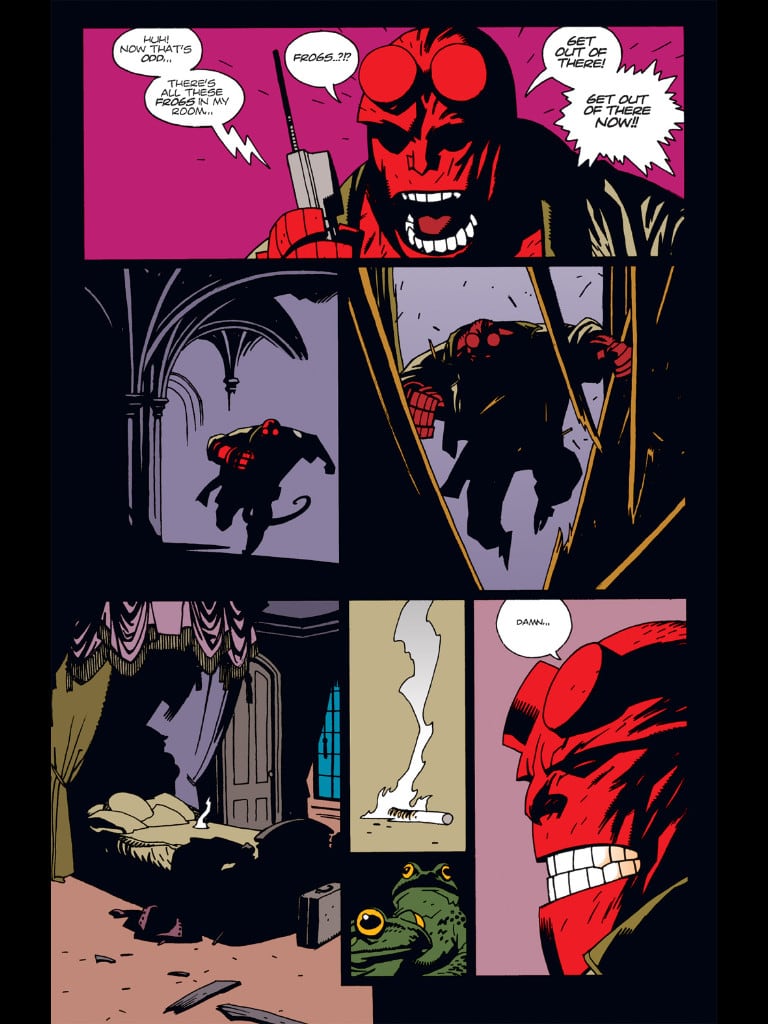 Mike Mignola made no secret his work is heavily influenced by H.P. Lovecraft. HELLBOY weaves classic Lovecraftian tropes such as decrepit castles, maddening conspiracies, and horror on a cosmic scale into it. There is no shortage of arctic expeditions (like in AT THE MOUNTAINS OF MADNESS) or menacing Cthulu-like entities. In the “Seed of Destruction” arc, the journey to the spooky Cavendish manor is especially reminiscent of Lovecraftian turn-of-the-century, upper-class haunted house lore. Mignola also plays on Lovecraft’s tendency to present his cosmic events as unexplainable and unavoidable. HELLBOY comics don’t always provide you with all of the information to connect the dots, which adds to the mystery and unpredictable nature of the universe.

READ: Like comics with monsters? Take a look at our interview with Russell Nohelty on his MONSTERS AND OTHER SCARY SHIT: A MONSTER ANTHOLOGY Kickstarter

There was no shortage of tough with HELLBOY’s release in 1994, a smack talking anti-hero in comic books. Fellow cigar chomping, cuss-word-slinging, contemporaries include the similarly designed Lobo, Wolverine, and Spawn. Mignola did not fall into the trap that many of his contemporaries did by making the character overly moody. He is tough and has an attitude, but the most interesting part of Hellboy? He never reacts to any threats like a regular superhero would because of his anti-hero characterization.

Hellboy is more like a jaded seasoned police officer who has seen it all. After Rasputin’s paragraph long world-domination monologue (complete with a Darth Vader “join my side” invitation), Hellboy replies with, “…I think I’ll pass.” When he gets hurt, he says, “Ow,” and when he narrates a battle, you get a sense of his experienced thought process. Hellboy does not lust for violence as his contemporaries do. He is never too brooding and always has that signature Danny-Glover-two-days-away-from-retirement-getting-too-old-for-this-@#$% mentality, yet he never delves into exaggerated “woe-is-me” anti-hero gloom.  Mignola’s balanced approach to a supernatural character is one of the most refreshing aspects of the series. 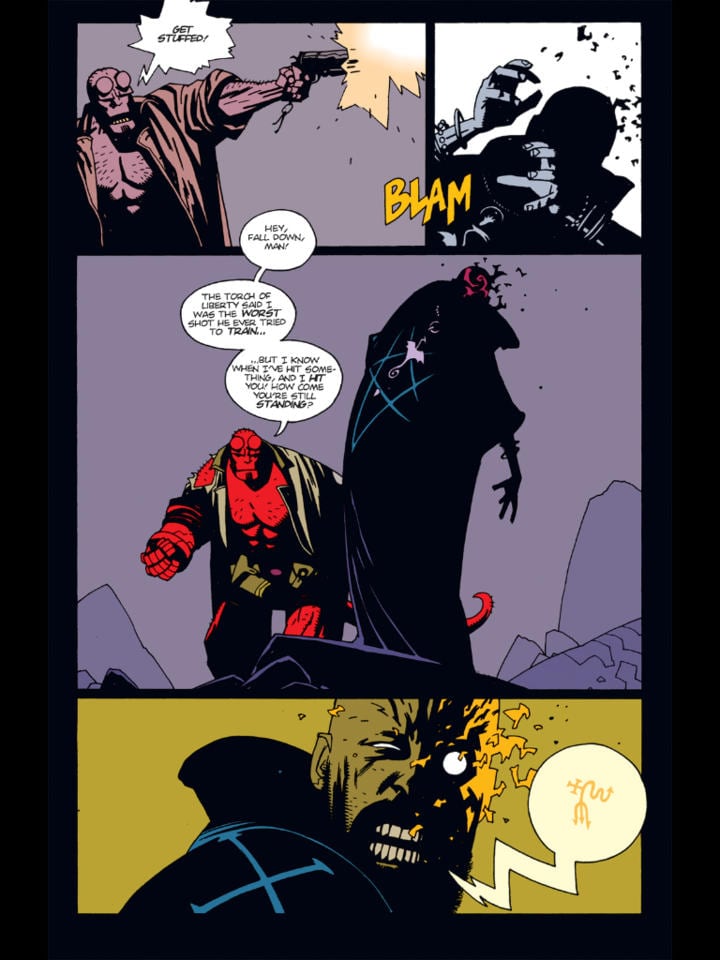 HELLBOY comics usually feature his employer, the BPRD (Bureau for Paranormal Research and Defense). The other agents include loveable superpowered misfits, just like Hellboy. In the first two volumes, there is Liz, the firestarter; Abe Sapien, an amphibious sharpshooter; and Leach, the human metal detector. Similarly, Hellboy is definitely the Wolverine-type loner of the group. Abe Sapien is like Nightcrawler in that his proper personality and intelligence shine through his strange appearance. Liz Sherman reminds us of a combination of Rogue and Phoenix with her uncontrollable powers. Guilt over her powers racks her with guilt. Like the X-Men, these characters live and work together, while being isolated from society.

Additionally, side quests punctuate Hellboy’s solo adventures with this interesting team of misfits. I find the interplay between the small group interesting and always well-positioned against the more normal agents. Mignola perfectly balances the fact that these characters feel less like freaks because they have each other, but they are different enough to still feel isolated.

5. Hellboy Deals with a Global Scale 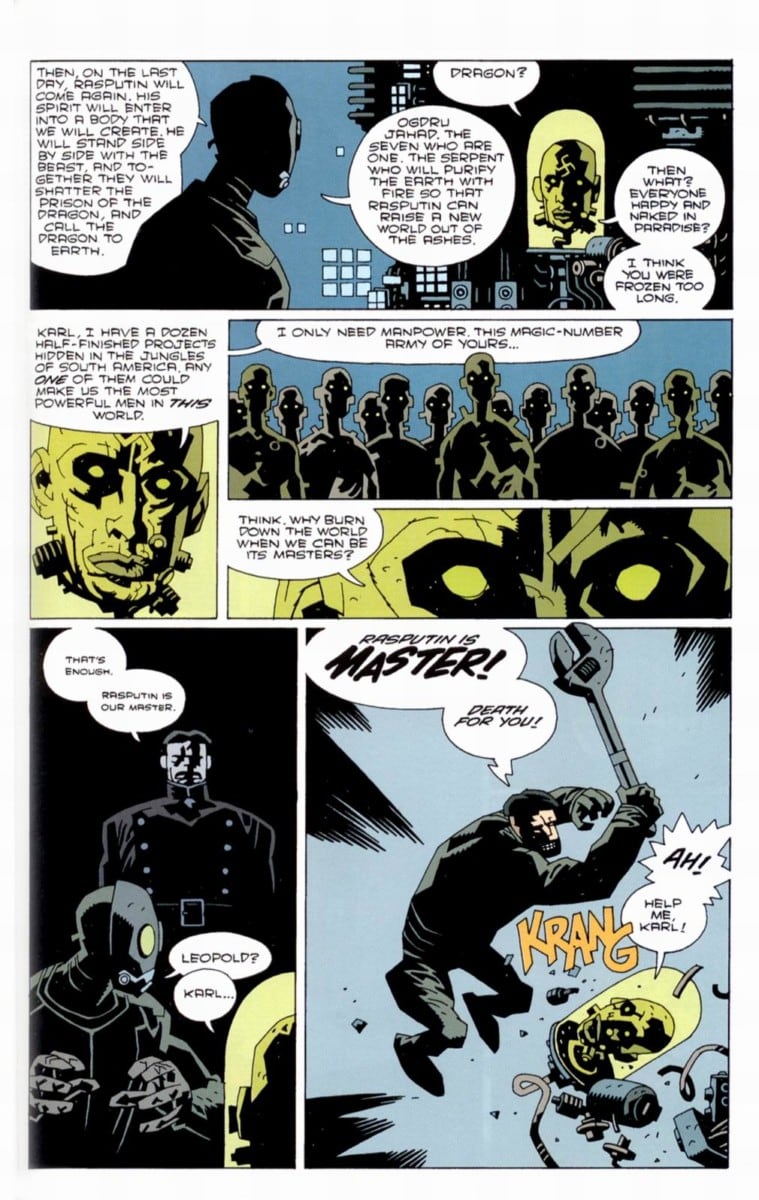 Mignola uses a number of exotic locations and creatures in these first two volumes. Rather than relying on the normal pantheon of supernatural creatures, Mignola digs into creatures such as the Greek Goddess Hecate, the bird-like Women of Thessaly, Baba Yaga, Romanian Vampires, and a medieval Homunculus. If you have saturation plague with werewolves and sexy vampires, then this is the book for you. It is always interesting to see what culture Mignola will pull upon for his next creature.

If these concepts seem interesting to you, start digging into HELLBOY. You only have around two decades of catching up to do.