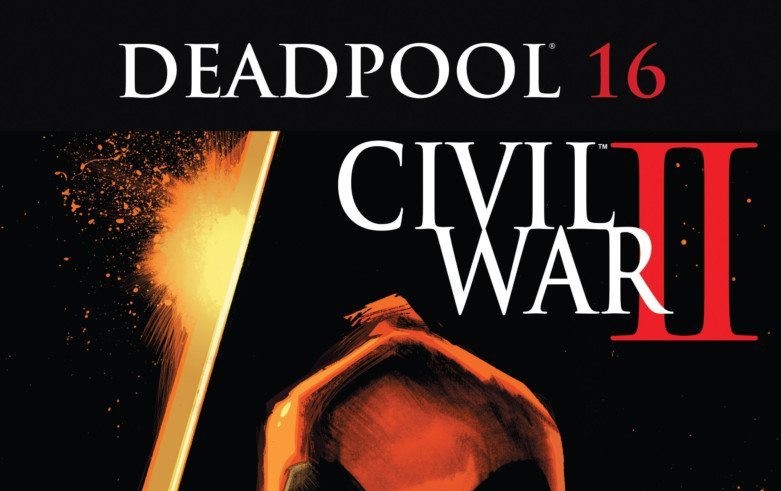 DEADPOOL #16 wasn’t a comic about Deadpool—it was a comic about the idea of Deadpool. In this new run of the series, there is less focus on Deadpool as a character. Instead, the writing focuses on the mythology surrounding him. Since his film released, fans have become obsessed with him and his stories reflect that; most issues of this series don’t bring any new developments to the character unless you count him being a rich and famous Avenger now. I had hoped that this issue would expand on the emotional motivation behind Deadpool’s attempt to kill all the Mercs for Money last issue, but instead, we got an issue focused entirely on Solo.

While trapped in a safe with Deadpool and the Mercs for Money, Solo reminisces about his experience as a hired gun. He had impersonated Deadpool so he could charge more but had ended up being hired by people who wanted to frame the Merc with a Mouth for assassinating a diplomat. Thinking quickly, he managed to overpower his would-be killers and save the diplomat. He was rewarded with praise from the people and a free meal coupon for Outback Steakhouse. At the end of the issue, it’s revealed that while the Mercs reminisced away the pages, Madcap has been plotting his return. He even had a hand in influencing the assassins to frame Solo. 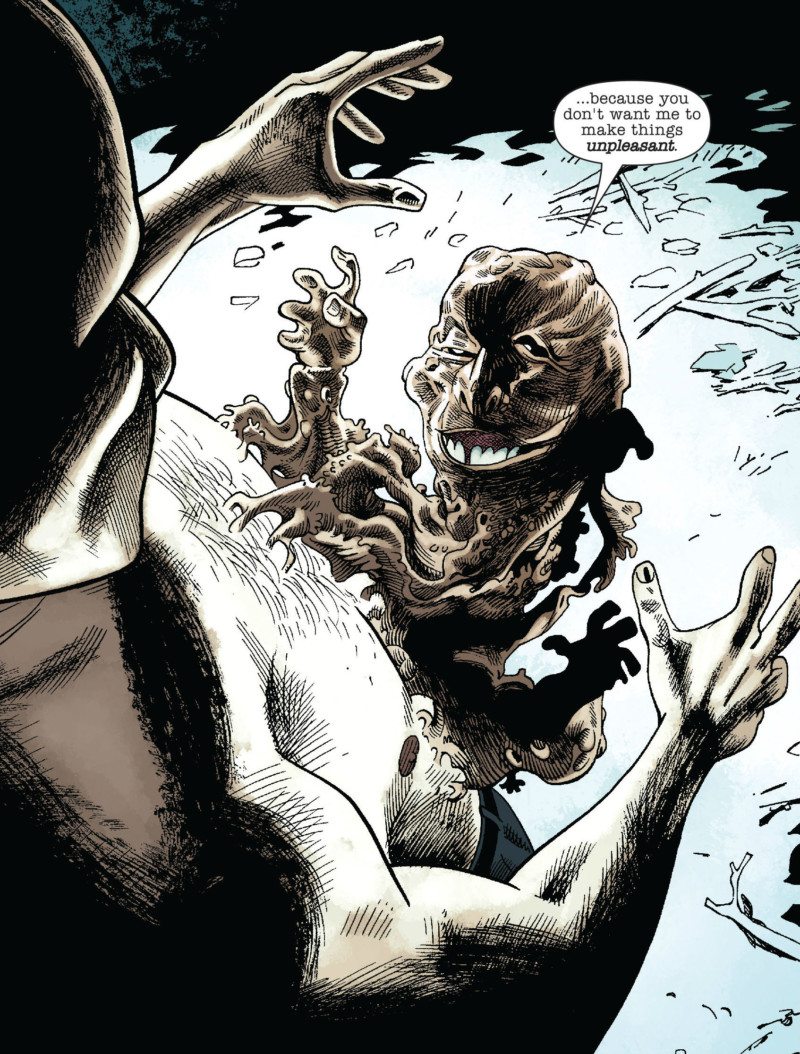 Once again the plot suffered by putting its focus on the wrong character. I don’t care enough about Solo to want to pay attention to him in a DEADPOOL comic; that’s why we have DEADPOOL AND THE MERCS FOR MONEY (and many of those Mercs for Money are getting their own solo series in the Marvel Now! lineup). It’s fine if you want to tell that story, and it’s an impulse that makes sense. I just don’t like it in this book. In my opinion, DEADPOOL should be focusing on Madcap since he’s a villain who really gets under Deadpool’s skin. Most characters are annoyed by the Regenerating Degenerate’s humor and dangerous antics, but Madcap understands the mental anguish that motivates him—and out-crazies him. That’s what makes Madcap dangerous, and it’s why he serves as a good foil for the character. The scene at the end with Madcap creeping out of the man’s skin was the single redeeming factor of this issue.

READ: Wonder what Deadpool is up to with his best pal Spidey? Check out our review of the latest installment of their solo series!

This issue confirmed my fears about the new series: the character has gotten too popular for his own good. I’m not going to gripe about how “all these people only want to read this comic because they saw the movie.” I want to welcome new readers. But, the fact is that DEADPOOL has become a book about the cult of personality surrounding the title character, instead of actually spending time developing that character. There are decent issues here and there but, overall, it’s become a corporate façade. Marvel is churning out endless Deadpool-related books because they know people will buy them. Popular perceptions of the character have negatively influenced content.

Even the art didn’t quite measure up. I felt that Mike Hawthorne was holding back this issue. On the last page, he really proved that he can draw a terrifying, detailed panel. The problem is that none of the other panels convey that sort of urgency or demand that emotional response from the reader. That said, the art isn’t horrible—it’s decent, it tells the story. I did like how Solo’s teleporter worked by teleporting one-half at a time. 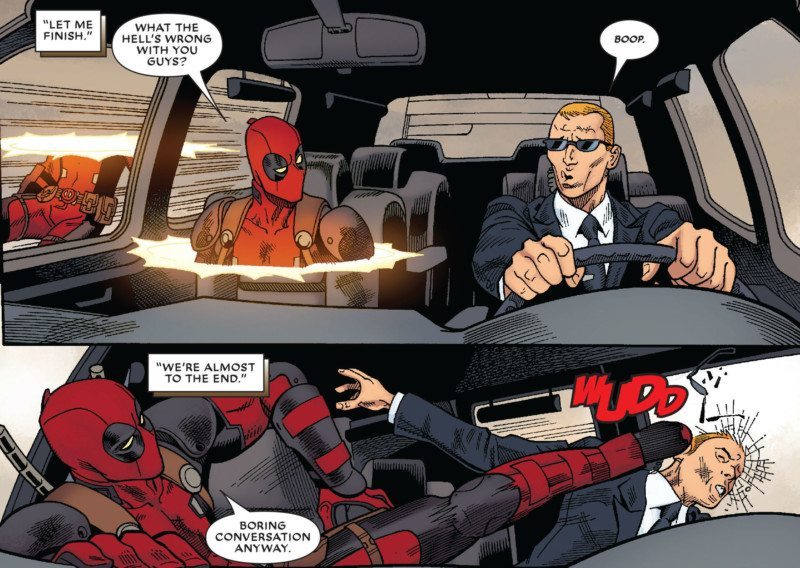 I couldn’t help but be reminded of the car chase scene from the DEADPOOL movie reading this sequence; it’s art imitating art. I don’t think it’s that creative, but being meta is all part of this book’s resumé.

Aside from a few interesting artistic choices, this issue was largely a flop for me. It was a low-stakes story about a character I didn’t care about and fed into the Deadpool cult of personality. Hopefully Madcap will be back soon to liven things up.