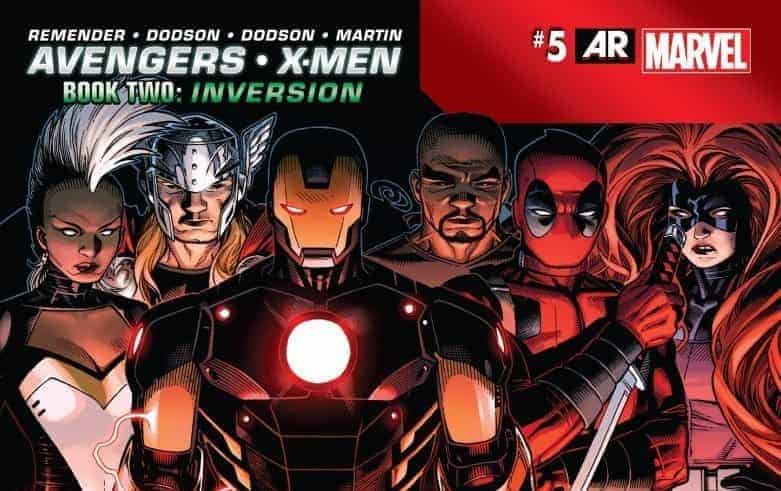 I think it’s been pretty clear that I’ve generally been disappointed with ‘AXIS’ so far. In large part, that’s been because I found the characters to be unrecognisable, and the rationale behind the events to be beyond my ability to suspend disbelief. However, I have to say that ‘AXIS #5’ is where the story actually picks up a bit.

Once again, Remender changes his focus. Spider-Man, who had a brief appearance in #4, is pretty much central to the plot in #5; a good chunk of the story is told through his reaction. We see a resistance beginning to gather, as the Avengers and the X-Men squabble amongst themselves – and as the X-Men take a dramatic stand.

Sure, the storyline is still as subtle as your average sledgehammer; but this issue actually has fun, largely through the presence of Spider-Man, who is the first hero to feel in a sustained state of ‘in-character’ through the whole miniseries.

At the same time, Remender places knowing winks into the story; the moment when Captain America’s shield rebounds against him is nicely symbolic, representing in an instant how far he has fallen. And Spider-Man’s reaction to meeting the new Nomad is wonderful, presenting a glimpse of a man pushed beyond his limits. To comic-book fans, it reads as a subtle laugh at how unbelievable comics really are, and Spider-Man is the perfect vehicle for that.

All this being said, there are a few issues with ‘AXIS’ in terms of – wait for it – logic. I find it unbelievable that Steve Rogers has worked everything out. We saw, in #4, that S.H.I.E.L.D. have been pretty much unaware of it all, and yet Rogers has just watched the last fortnight’s worth of hero stuff, deduced everything, and yet not formed any alliances until the rest of the Avengers were captured.

I love how they just join the dots so easily. Remender’s ‘Uncanny Avengers’ run consigned the entire Marvel Universe from ‘Battle of the Atom’ to the beginning of ‘AXIS’ as taking a fortnight. Another fortnight has passed, and yet Magneto and Steve Rogers tie everything straight to the Red Skull. Nah, I just don’t buy it.

We now have a core group who we can explore these events through; Spider-Man, Magneto, Steve Rogers, and Nomad. And that focus looks like a good one. Hopefully, Remender can keep the focus on them – helping us to really experience the bizarre horror of it all – and pull this mediocre plotline up.