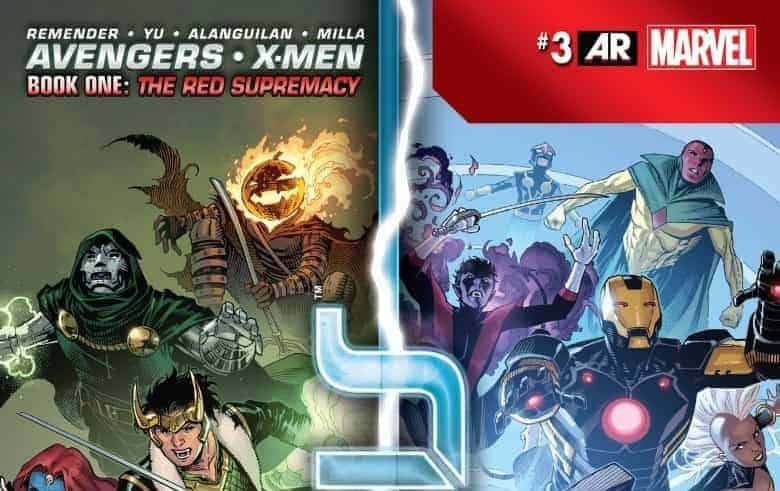 The world turns on its Axis.

Sorry, I couldn’t resist the over-dramatic line; it seems so fitting for the story Rick Remender is penning. I’m going to break today’s review down into two sections; the first is going to be a quick study of some of the logical inconsistencies behind Rick Remender’s plot to date (and I’m afraid this issue is no better). The second will try to assume that none of these inconsistencies are fatal to the plot, and ask whether this is a good comic. So…

In my review of Part 2, I pointed out that the core idea of this book doesn’t make sense. If the Sentinels were built based on Tony Stark’s files, then a good few of these villains would’ve been in these files. What’s interesting, though, is that – on reflection – there are some of the villains who wouldn’t have been.

At the time Tony was head of S.H.I.E.L.D., in charge of running the registration files, Magneto was depowered; Doom was imprisoned; Carnage, Hobgoblin and Sabretooth were believed dead; Loki was missing, believed dead. I’m not sure on the status of some of the others, but Mystique – an X-Man at the time! – was automatically registered, Deadpool was a registered hero, and the Absorbing Man was one of Baron Zemo’s Thunderbolts. So, all in all, maybe half of these villains make sense to be a threat to these uber-Sentinels. Unfortunately, as I mentioned before, even if Magneto was depowered, the Sentinels would’ve been designed to take on Polaris. So… well, a lot of the action in the book doesn’t really add up.

By the end of the book, another logical inconsistency has become worse. AXIS began because Magneto crushed the Red Skull’s brain with rubble. Somehow, this turned him into the Red Onslaught, which I assumed was a psychic projection of all his hatred.
Except, when the dust has settled at the end of this story, the Red Skull has turned back into a human, albeit catatonic, form – one bearing no trace of the injuries he suffered at Magneto’s hands.

The original Onslaught was a psychic being that pulled itself out of the Astral Plane (hence Xavier could be separated from Onslaught). What on earth has been going on in this book? From a dramatic viewpoint, I get it; from a narrative viewpoint, the whole thing is sheer gibberish.

Ignoring all that! Does it work?

Yes and no. Remender’s characterisation improves significantly in this chunk. His Deadpool is superbly realised, and plays off brilliantly against Tony Stark. What’s more, it’s actually real fun to see the villains working together; their, ah, ‘banter’ – which you always feel is only a heartbeat away from outright violence – is really well-done, and frankly rather gripping. Of course, violence does ensue, and in amusing ways. Remender really gets Deadpool.

Oddly enough, star of the show goes to Enchantress, a Thor villain I’ve never had much time for. I found Remender’s portrayal of her to be so brilliantly entertaining.

The story takes some fun twists, potentially setting up a change in status quo, and then it happens; as ‘hinted’ in #2, the Scarlet Witch and another sorcerer use their powers to cause an inversion. In the aftermath, the fact this story is so heavily spoiled is actually what makes it attractive; we’re left watching uncertainly as the heroes bicker, and as heartbreak ensues. What’s more, Evan’s transformation is both disturbing and exciting, from a narrative view.

But here’s the thing: this is all a bit anticlimactic. The Red Skull’s defeat has been coming since ‘Uncanny Avengers #1’. His threat has been looming since almost the moment ‘AvX’ ended. This chapter is called the ‘Red Supremacy’. And this is it?
The Red Skull rampages around a dead Genosha (how are the concentration camps not damaged? How are countless mutant prisoners not either running or joining the fight?) And the psychic effect of the Red Skull – his ‘hate wave’ – hasn’t been seen since #1, receives throwaway references every now and again, and didn’t even seem to be causing much trouble in spin-offs such as ‘Magneto #11’?

Yes, this is a good comic. I actually enjoyed it. But there’s been too much buildup, and I’m afraid it’s all rather disappointing. My hope is that the Red Skull alone has somehow not been inverted, and that as ‘AXIS’ continues he exerts his influence once again, rising amid the chaos. Otherwise, I’m very much afraid that this whole event may have fallen flat by the third issue.

What did you think of the latest issue of Marvel’s AXIS? Do you agree with this review? Please leave some comments below, we’d to know what you think!