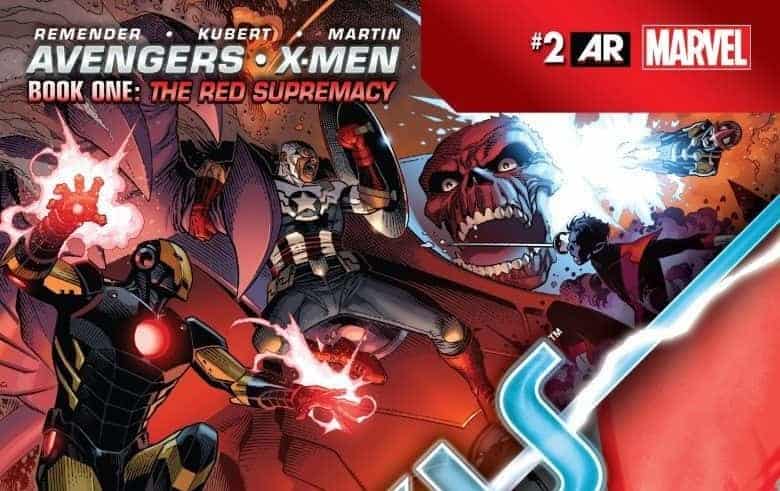 The first thing I have to say is that this issue really surprised me. Remender has openly talked about how this ‘AXIS’ was basically an oversized ‘Uncanny Avengers’ arc that Marvel realised was a bit too epic for one book. And yet, this issue doesn’t star any of the Uncanny Avengers. The real star of the show is Iron Man, who struggles to deal with the evils the Red Skull has subtly wrought in his name. By the end of the book, the heroes are reduced to a team with only two members of the Uncanny Avengers still active: 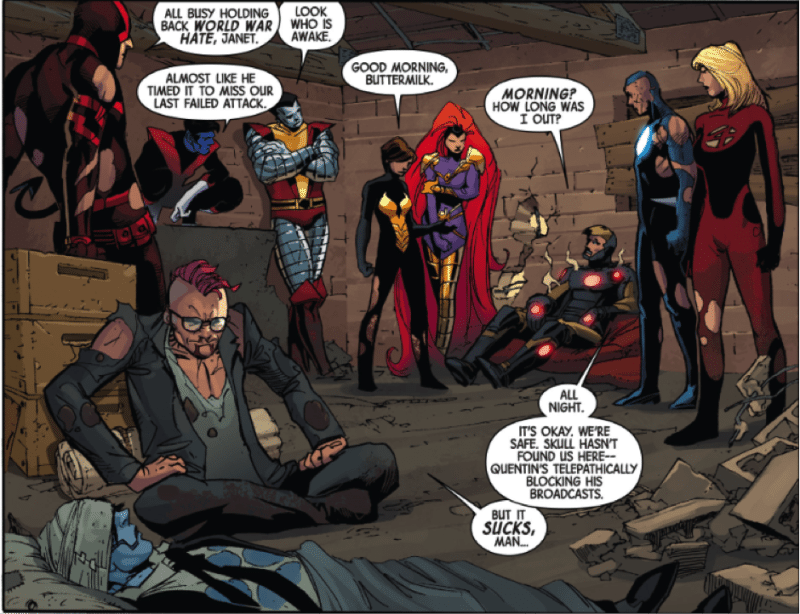 Characterisation is sometimes awkward – take Nightcrawler’s slightly bitter comment in the image above – and I note that Cyclops expresses no surprise, either at Havok’s being so badly scarred or his snogging Wasp. Still, given that Iron Man is the central character, I note that Remender really seems able to get into the head of an emotionally-devastated Tony Stark.

Unfortunately, for all that the issue is an OK read, there are three major problems. And yes, in order to explain these I’m going to have to spoil you rotten. So read on at your peril.

Missed the first issue of Marvel’s A.X.I.S. event?  Read Tom’s take on it by clicking here.

The first is the central concept; that Tony Stark has, under the Red Skull’s influence, built adamantium Sentinels trained to take out all the registered heroes from the Civil War era. And, because Stark couldn’t conceive of villains like Magneto switching sides, these Sentinels are vulnerable to the villains. At first glance, it seems sensible; and then, when you remember that the Sentinel designs are apparently based on Stark’s Civil War files, you start to wince.

You could be forgiven for forgetting, but during the Civil War era Baron Zemo was running the Thunderbolts. His strategy? Capture super-villains, implant control systems within them, and make them work for him. In other words, the super-villains were being forced to become super-heroes. And so Stark would naturally have been developing methods to neutralise them.

The logic gets even worse. Magneto – who has been an X-Man before, and even taught at Xavier’s School in the past – was someone Stark couldn’t imagine ever becoming a hero. Sure, Magneto rejoined the X-Men after Stark had fallen from his position of power in S.H.I.E.L.D., but… what? Particularly given at the time the X-Men had been welcoming any and all mutants, including villains, into the School? (And Mystique and Sabretooth being in the group Magneto gathers implies that the Sentinels won’t be programmed against them; however, at the time both these characters were allied with the X-Men.)

Are there too many new X-Men? Find out what Justin thinks about the latest direction of X-Men comics by clicking here.

A better argument would’ve been that, at the time Stark headed up S.H.I.E.L.D. and maintained these files, Magneto was depowered. All of which is irrelevant, anyway – Magneto’s powers are similar to those of his daughter Polaris. Stark would, by that logic, have designed the Sentinels to neutralise Polaris. Therefore, they’d be able to handle Magneto pretty easily.

The problem with this idea is continuity. At surface-glance, the continuity works. The minute you start to question it, it really doesn’t.

And the second issue is who’s responsible for the events of ‘AXIS’. I’m sorry, but the whole ‘Tony Stark is to blame for everything under the sun’ angle has been done so many times that it’s really, really old. We’d always known this was going to be one of the ideas in ‘AXIS’, and it was just a matter of how it worked out. Suffice to say it’s not particularly original, in my view. 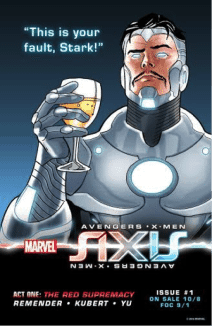 And then, this issue drops the bombshell on how the ‘Inversion’ is going to happen: 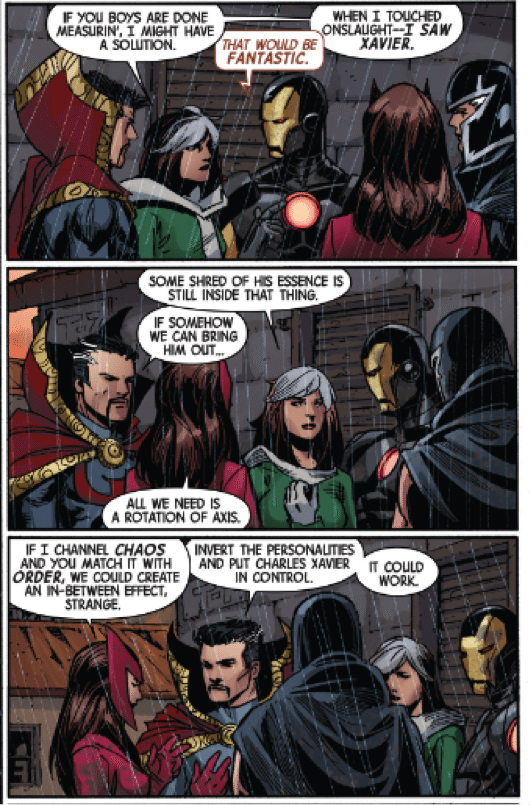 Marvel has had some other pretty high profile storylines.  Click here to listen to our podcast on the INFINITY GAUNTLET.

The Scarlet Witch and Doctor Strange are going to use their sorcery to try to restore Xavier. And something’s going to go wrong, resulting in everybody on Genosha (at a guess) being inverted. Not only does this make me wonder when Doctor Strange got so happy linking in with Chaos Magic, which he once denied existed much to Ch’thon’s amusement, but it also yet again elevates the Scarlet Witch to the position of being the magic bullet responsible for all the world’s ills. When Wanda wiped out the world’s mutant population, she was turned into little more than a plot device in order to accomplish what the Marvel editors wanted. Now Remender is continuing that disappointing trend.

All in all, ‘AXIS #2’ is a fairly strong comic. Unfortunately, it’s weighed down by its own inconsistencies and flaws, and that makes the central concept a disappointing one.

What about you?  What do you think?  Please leave some comments below or on Facebook to weigh in. We’d love to hear your thoughts!