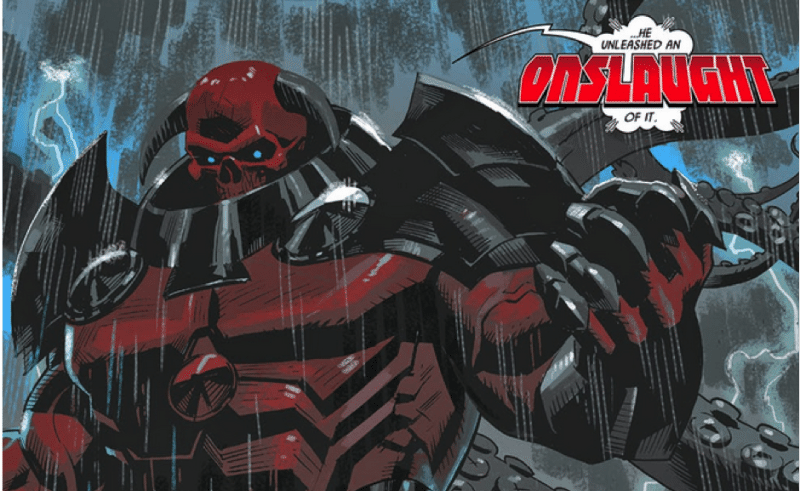 It’s here. An X-event on a scale not seen since ‘AvX’, with the X-Men and the Avengers standing side by side against the Red Skull. What’s coming promises to confront our heroes with their deepest, darkest fears…

When the dust had settled from ‘AvX’, Charles Xavier was left dead, murdered by Cyclops in a moment of ambiguous possible-insanity. And in ‘Uncanny Avengers #1’ we saw an act of grotesque sacrilege. Xavier’s body had no sooner been buried than the Red Skull dug it up, and somehow – through the brain of Charles Xavier – acquired the raw telepathic power of an Omega Level psychic. 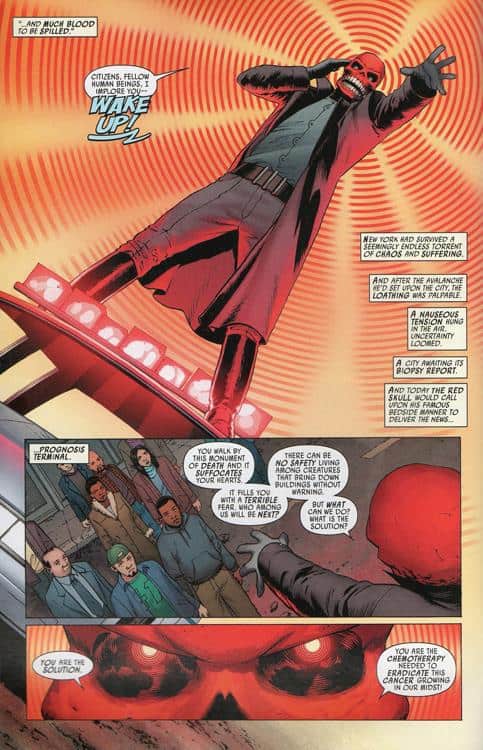 In recent issues of ‘Uncanny Avengers’ and ‘Magneto’, we learned the Skull had started off traditional Nazi concentration camps for the mutants, and everything culminated in Magneto’s assassination of the Red Skull.

That was when everything went badly wrong for the world’s heroes. Something snapped; the floodgates of the Red Skull’s hatred were opened; and the Red Skull became a behemoth fashioned after the psychic construct Onslaught from the 1990s X-Men comics! 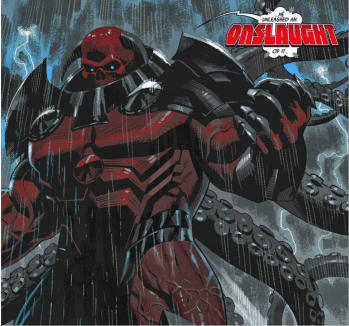 First of all, I have to put my hand up and admit that I’ve not been a fan of Rick Remender’s ‘Uncanny Avengers’. I’ve frequently had cause to complain at his characterisation – especially for poor Rogue, whose development under the pen of Mike Carey I feel has been pretty much negated. That being said, though, historically I’ve loved some of his writing; ‘X-Force’ was phenomenal, and remains one of my all-time favourite runs. So I approached ‘AXIS #1’ with mixed expectations.

The issue opened with a pretty standard Avengers mission, and I admit that I immediately felt jarred – the banter just didn’t quite work, with Black Widow’s ‘Real Housewives’ just not quite sounding in-character. Events soon spiral, with amusing hero-on-hero clashes stirred on by a hate wave that spans the world. Oddly enough, it’s when he tries to be humorous that I feel Remender really struggles in this issue; again, when the X-Men arrive to storm Genosha, an island with a history steeped in bloodshed, it just seems… off. And yet, that scene is redeemed by the fabulous Nightcrawler:

As the above proves, Remender doesn’t fails to cast his characters. He shows willing to dip into the deep history of the Marvel Universe, pulling up the personal tragedies of every character in order to give the Red Onslaught a foothold in their minds. And every now and again, there’s a real moment of genius; say, for example, Rogue’s inspiring speech to the Scarlet Witch – the first moment in all Remender’s writing that I felt I was truly reading Rogue. Yes, he finally got Rogue right! 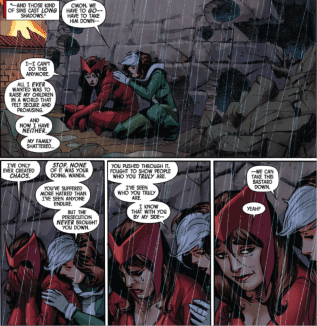 Unfortunately, the villain of the story is tremendously limited. I feel as though Remender has tapped into every cliché of super-villaindom ever written (“You dare?”), and assumed that, because the Skull’s a Nazi, he can basically be ‘TEH EVIL’. It’s ironic that the main antagonist becomes about as deep as a puddle.

The question of continuity looms large, though: when is this story set? It’s clearly after the events of ‘Original Sin’, for Thor doesn’t wield Mjolnir – but he also hasn’t suffered the grievous injury of ‘Thor #1’. When was Cyclops captured by the Red Skull? Why has Beast called in Jean Grey and not any of the other members of the All-New X-Men? There are occasional subtle nods to help place the story, though, such as the hint of tension between Cyclops and Iceman, which fits with events in ‘Uncanny X-Men’.

And yet, the best thing in this issue? Charles Xavier. I’m not going to give anything away, other than say that it was wonderful to ‘see’ the Professor again. I’m an old-school X-Men fan, and I’ve truly missed him.

All in all, this was a fun issue with fairly strong characterisation; it united the world’s heroes against the Red Onslaught, ready for the hammer to fall next issue as the ante is upped once again.