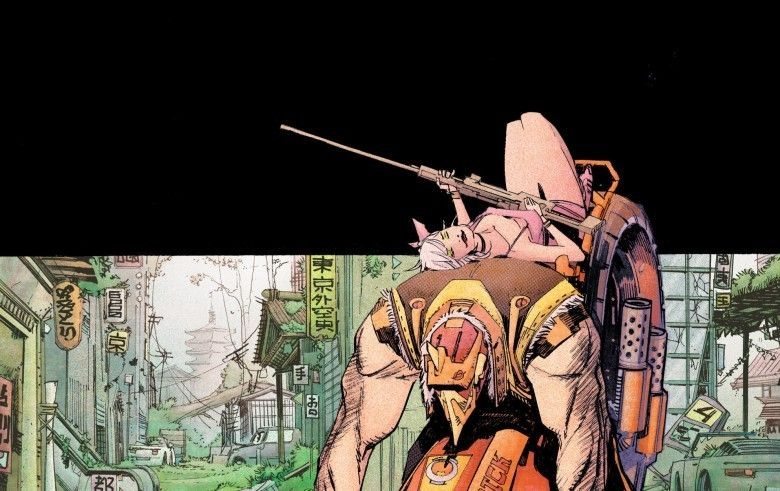 In the future, everyone is addicted to technology, but there’s a place you can go if you want to be free…

Debby Decay and Led Dent are Constables, a kind of future law enforcement, out on one last job. Their mission? Stop a madman who kills as easy as he breathes. If they’re successful, they get to go to Tokyo, a sanctuary where you can be free from the burden of technology.

Rick Remender, Sean Murphy, and Matt Hollingsworth team up for one of the most anticipated releases of the season.

If only it lived up to the hype.

TOKYO GHOST #1 works as a first issue–in fact, it excels at introducing its world and its characters, but, beyond that, I’m not really sure I should care about what happens within that world. The story shoots out of a cannon from page one and doesn’t slow down until the end. Along the way TOKYO GHOST #1 makes it clear that its world is a crowded world, an unwelcoming world, and a violent world. There is no doubt: the world creation in TOKYO GHOST is as assured as anything else out there–after all, Remender, Murphy, and Hollingsworth are veterans and some of the best in the business. Production value on this title will never dip below a premium (though Rus Wooton’s lettering does struggle to keep up every now and again). 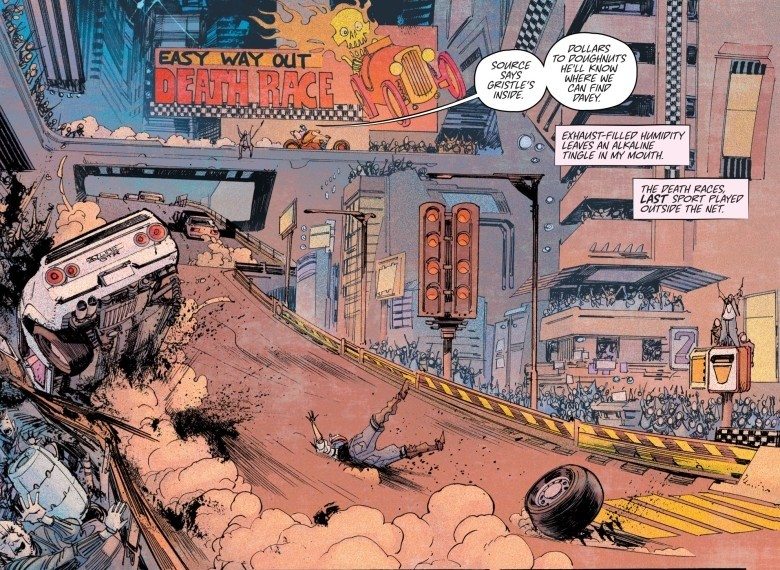 All the pieces are there, so why don’t I care?

Because there’s nothing particularly fresh here. Despite the quality of Murphy and Hollingsworth’s work, TOKYO GHOST is released so close on the heels of CHRONONAUTS that it’s hard to not feel as if they’re doing more of the same. Simultaneously, the world Murphy’s created with Remender is based on an idea that isn’t exactly news: Human beings are addicted to technology and it seems it’s only getting worse. I’ve spoken before on the popularity of dystopian futures–especially tech-addicted ones, but what works about comics like PREZ or NEGATIVE SPACE, or even TV shows like BLACK MIRROR, is that the projection of the advancement of technology and its hold on our attention is proportional to the story’s projection into the future. They work in concert: one reveals truths about the other.

TOKYO GHOST takes place over 70 years into the future, and all TOKYO GHOST really has to say about (in not-at-all-subtle fashion, by the way) is that we’re addicted to technology and living on top of one another. Human begins have become more callous, further desensitized to violence, and more selfish, while the physical world has gotten worse environmentally, leading to crowding of already claustrophobic cities. PREZ goes only a fraction of the time into the future and the truth of technology’s aspect on our social culture is as potent as ever. Brian Azarello and Eduardo Risso’s SPACEMAN took place in a socially bankrupt and environmentally distressed world and was released in 2011!  Sean Murphy and Matt Hollingsworth worked on THE WAKE, released only two years ago, and its second part addressed much of the same concern (with very similar art and color, in fact). Hollingsworth is currently coloring WE STAND ON GUARD, and while that dystopian future isn’t caused by technology or climate, technology and climate are folded into its world and story with much more subtlety and care. 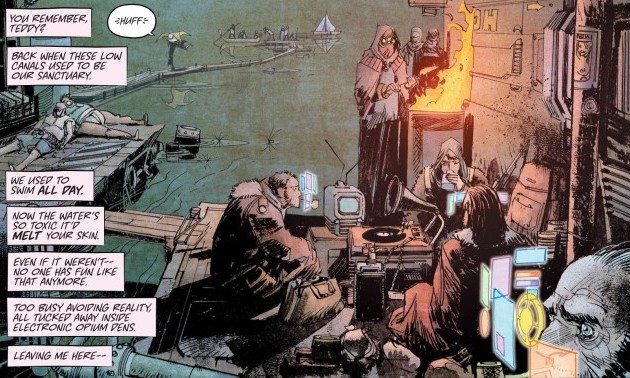 I’m giving all these examples to demonstrate that no, nothing is new under the sun, but repeated ideas can still be executed with care. The things that SPACEMAN, PREZ, BLACK MIRROR did recently, the film IDIOCRACY did even earlier, and I’m sure there was something before that, and before that, and before that. You needn’t be “original” as long as your characters are strong and their wants are clear. With that in mind, TOKYO GHOST still doesn’t work. Why? There’s nothing about the core of the story to really to like. The protagonists, Debby Decay and her partner Led Dent don’t give us reasons to like them. We first hear Debby before we see her, and she’s lamenting the state of the world to someone named Teddy, for whom the reader stands in as her audience. Yes, the world is bad, Debby. That much is obvious (TOKYO GHOST makes a habit of stating the obvious and asking for credit for doing so). 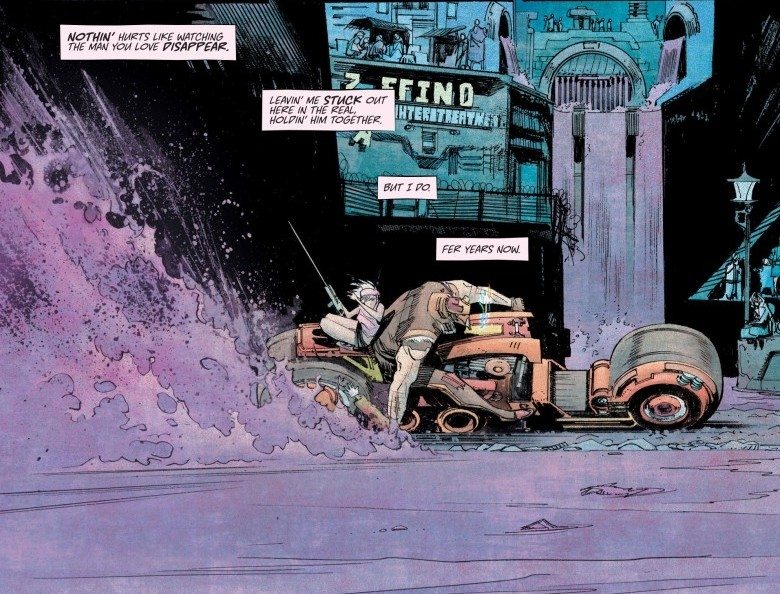 Shortly after that, Debby condones a vicious act of violence the likes of which I haven’t seen since SIN CITY–all in the name of preventing more violence. The person they’re pursuing, the subtly named Davey Trauma, is revealed to be so unabashedly and unrepentantly violent that Debby and Dent shouldn’t earn any special kind of credit for stopping him: he’s someone that so obviously needs to be stopped and they aren’t special for doing so.

Later we’re asked to care that Debby cares about Dent because he’s a tech-addict. Tech-addiction in TOKYO GHOST is projected in this world to be on par with drug addiction, rendering people almost braindead–which is just an explicit extension of the kind of metaphor thrown around to refer to tech addiction today. In fact, tech-addiction is a drug: beyond the obvious interface with which we are familiar today, nanomachines are, in this future, synthesized to be injected and achieve things like self-esteem, true love, and muscles.

Anyway, Debby’s trying to get Dent to Tokyo (a tech-free utopia) so she can get back the man she loves. That will only happen if she and Dent complete one last job. Not to harp too much on the “nothing new under the sun” idea, but the hopes and dreams of the protagonists hinge on the “one last job” cliché. To make matters worse, Debby’s narration hits you over the head with that idea, reminding you often (despite the issue’s title being “One Last Job”) that this is their one last job.

Debby and Dent can leave their current life behind and go to Tokyo if they complete this one last job and capture Davey Trauma.

Is it truly their last job? Is Tokyo too good to be true? Will they live to see it? 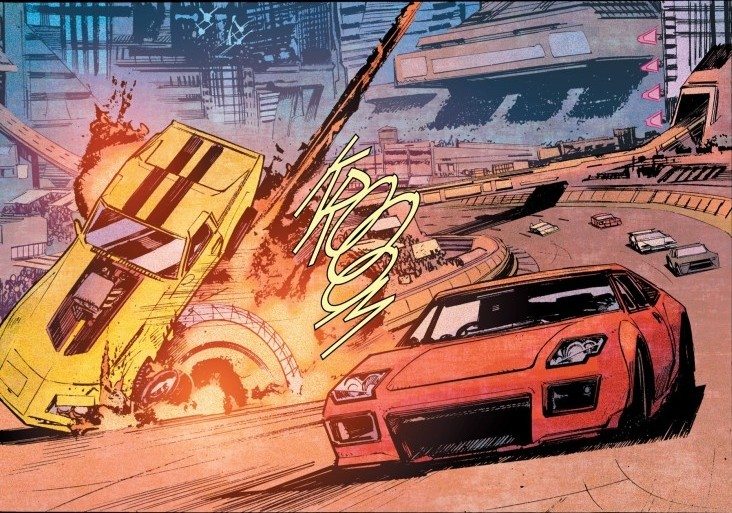 We see nothing of Dent before his addiction to allow us to sympathize with Debby! We just have to take her word for it. What we do see, however, is Dent, a hulk of a man behind a floating screen who solves problems with violence, and Debby, his supposedly caring partner, taking advantage of his addiction to complete their one last job.

She makes it up to him, however, of course: Dent is afraid of intimacy, apparently, so when he’s tripping especially hard on drugs, her touch is the only way she can get through to him. Cue the gratuitous (public) sex scene between the stereotypically comic-book-sexy protagonist and her male partner.

Remender tries to undercut this stereotype by making Dent childlike in his dependence upon technology, but that just makes it creepy. He tries to undercut the same male stereotype by having the issue’s antagonist literally cut the head off someone who just purchased drugs to make himself buff. If everyone in the future is addicted to technology, are they not deserving of the same kind of help that Debby is trying to get Dent? No, Remender would have you believe, because that guy is vain, so he deserves to have his head cut off.

MORE FIRST ISSUE LOVE TO GIVE? CHECK OUT SOMETHING A BIT MORE SUBTLE: PLUTONA #1!

Speaking of Davey Trauma, he speaks a dialect gleaned mostly from Internet-speak, rife with “pwn”s and “YOLO”s, which would be a great bit of world-building if it were consistent and not thrown away once the plot required more (see the aforementioned SPACEMAN for a consistent and effectively frustrating example of thorough future-dialect). It’s an example of a good idea that’s only paid lip-service. Good ideas are hinted at in TOKYO GHOST #1 while bad ideas are front and center.

TOKYO GHOST #1 wastes the talent of its team, creating a vulgar and unsympathetic world populated with further unsympathetic characters motivated by a plot that has no real import. I will read TOKYO GHOST #2 because this team has at least earned enough good will for me to give them another shot, but they are on very, very thin ice.

WANT TO READ MORE REVIEWS? OF COURSE YOU DO!

WANT TO READ MORE BY DANNY? WHO DOESN’T? CLICK HERE!