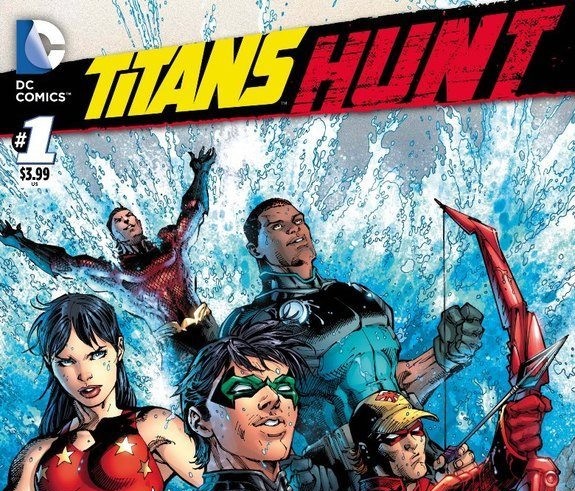 When DC Comics relaunched their universe as The New 52 in 2011, perhaps none of their major franchises was as negatively affected as the Teen Titans. Most of the prominent characters were wiped out completely (Donna Troy, Wally West), had their history altered to such an extent that they might as well have been (Tim Drake, Beast Boy, Starfire, Superboy, Bart Allen), or were changed into something almost unrecognizable (Raven). DC has slowly been rectifying the situation over the past few years with individual characters (see the current STARFIRE series as an example) and are taking their first shot at rebuilding the continuity of the Titans as a whole in TITANS HUNT. As an obsessive Titans fan, I was cautiously excited by the concept when the news broke, and happy that DC was finally taking steps to “fix” the Titans. If they succeeded is another question entirely. 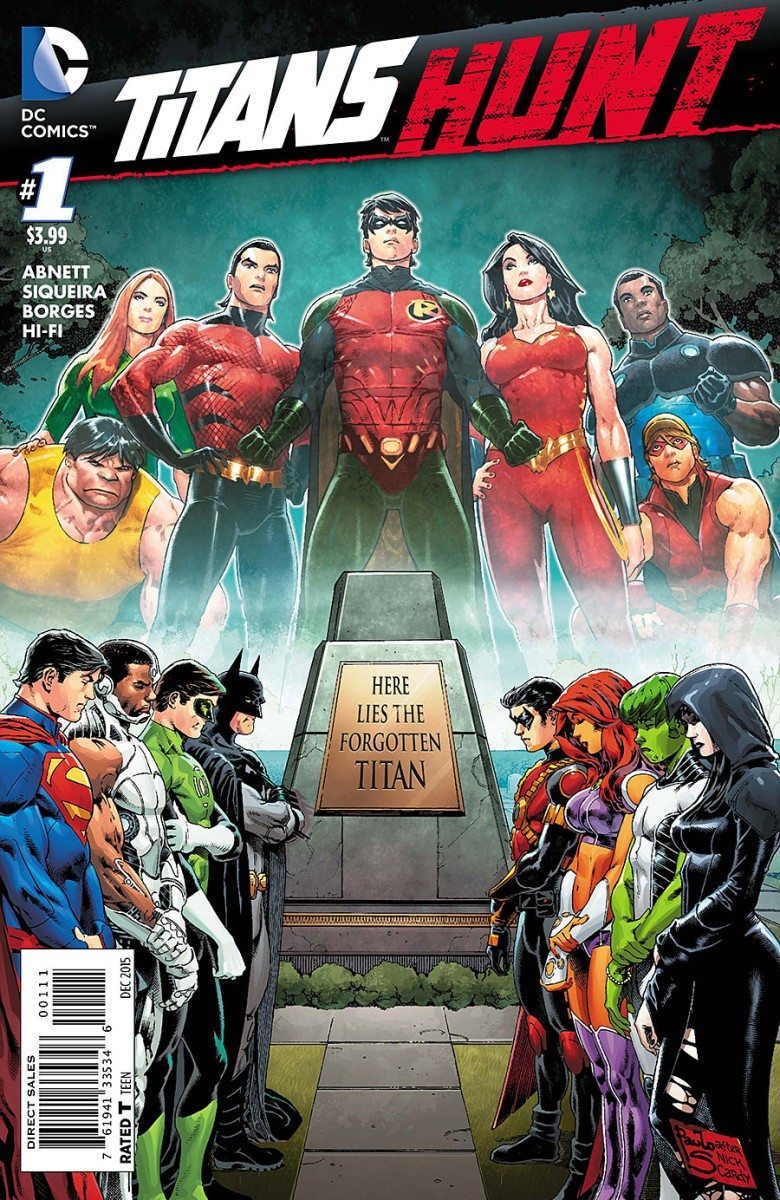 TITANS HUNT #1 kicks off with Roy Harper (AKA Speedy/Red Arrow/Arsenal) stopped at a small town in Oklahoma, transfixed by a water tower vaguely shaped like the letter T. Something about it causes massive deja vu in Harper, a feeling so overwhelming that he doesn’t realize that the town’s tornado warning signs are blaring. Looking for something to take the edge off, Roy enters a liqueur to store to buy a bottle of whiskey before it closes down, and encounters a massive clerk who calls himself Gnarrk (as in Gnarrk The Caveboy, a Silver Age character beloved by a segment of Titans fandom).

READ: A fan of the Titans?  Check out our STARFIRE reviews!

The book then shifts to Dick Grayson in the midst of one of his Spyral missions, namely busting a ring of metahuman organ thieves in New York City. All is going normally, or as normal as the above situation can be, until an unnamed Atlantean (though one easily recognizable to Titans fans as Garth AKA Aqualad/Tempest) arrives and murders the organ dealers in retaliation for their “harvest” of another Atlantean. Dick attempts to stop him from leaving the scenes, only to be violently overpowered before Garth disappears beneath the sea. After Garth’s escape, Dick is overwhelmed with the same feeling of nostalgia and deja vu that Roy Harper had earlier in the issue. 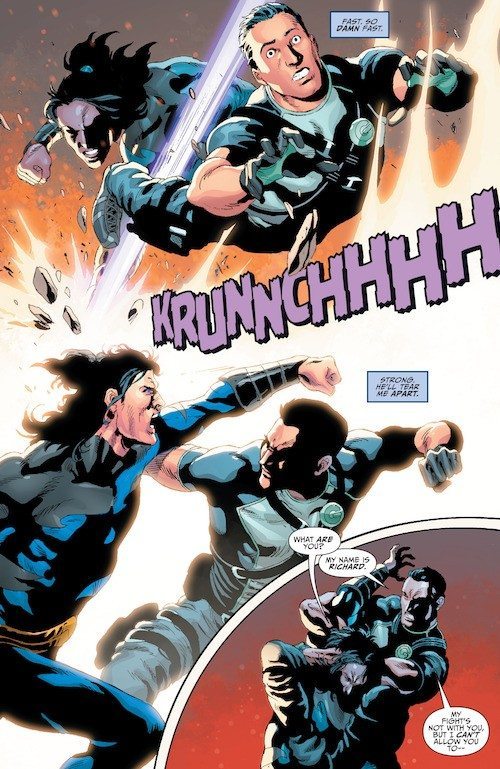 The book’s next vignette is shorter, a two page spread of Donna Troy examining a ruined building that she has some kind of connection to. Next we move on to the Academy Awards of all place, where Mal Duncan (AKA a Silver Age-era Titans character who’s gone by numerous codenames through the years, including Hornblower, Herald, Guardian, and Vox) and his wife Karen (AKA Bumblebee) are celebrating his victory for Best Original Score (the name of which is one of many easter eggs in this book for Titans buffs). 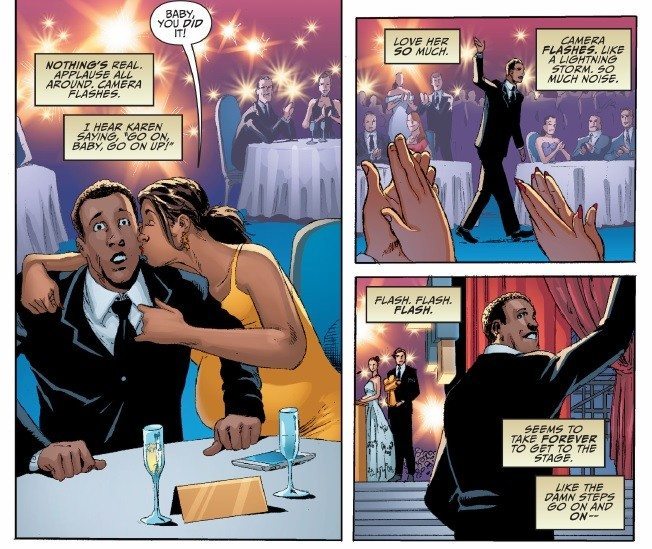 After these two quick sequences, the book shifts back to Dick Grayson licking his wounds from his encounter with Garth. Suddenly he’s contacted by a mysterious voice (their identity is revealed to us readers, though I won’t spoil it here) who knows his name, and tells him that he has to recruit “them” before “he” come after them. The book then shifts back to Roy, whose on the phone with his therapist discussing his relapse. Said therapist is revealed to be the same person who contacted Dick. It all ends with said person looking over files on each of the Titans we’ve seen in the issue vowing that “he” will never get them.

READ: Want to know more about the Titans? Check out our CONVERGENCE: NEW TITANS review here!

I have very mixed feelings on TITANS HUNT #1. From a practical standpoint, the plot of the issue breaks no new ground. It’s a fairly typical opening issue for a team book/mini-series, establishing each of the principal characters and their status quo before they meet up, and it lays the groundwork for why they’ll come together with the events of the last two pages. While this approach makes the book a bit predictable, it doesn’t make it bad. All of the characters are introduced effectively, and the cross-cutting between the anchor stories of Dick Grayson and Roy Harper with the interludes of the others keeps the issue moving at a brisk pace. I personally also appreciated all the little easter-egg references to Titans history, and considering this series is by and large an attempt to reintegrate some elements of said history into the DCU (and to bring in some of the lapsed Titans readers) we’ll see more of them as the series continues. The ending of the issue also sets up the potential return of very obscure Titans character, at least in my mind.

Much like the plot, the characterization in the book is pretty bare-bones. The two characters who get the most page time are Dick Grayson and Roy Harper, and each of them are defined by their current New 52 characterizations; Dick in his GRAYSON-era secret agent persona, and Roy as someone always on the brink of relapse. The other characters are only defined by the slightest bit of characterization, though that’s not out of the norm for a first issue. 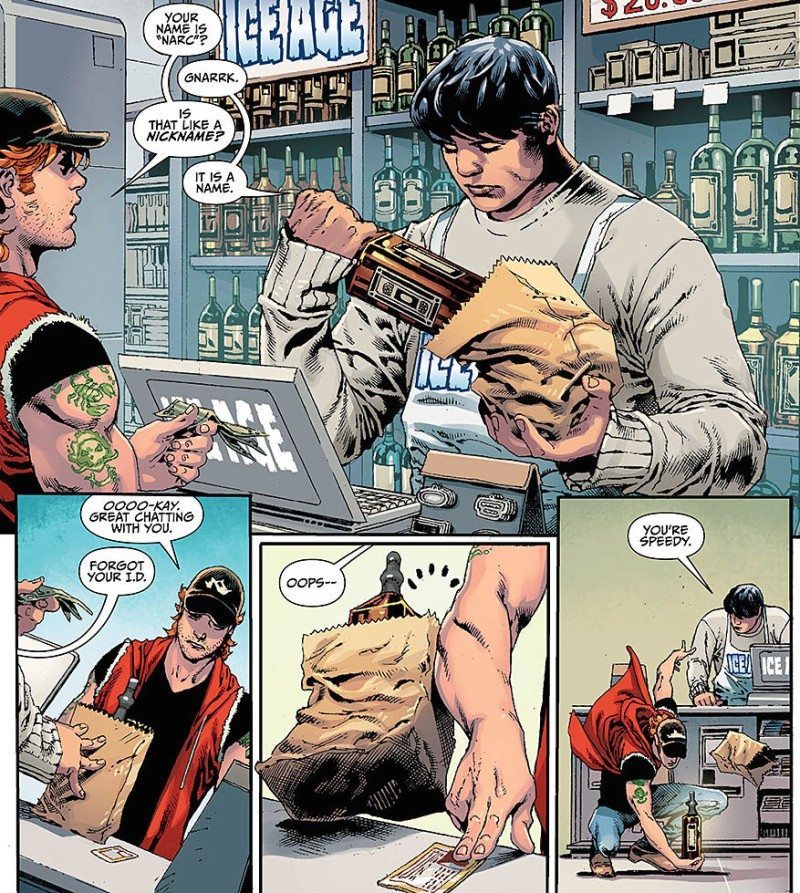 Artistically, the team of Paulo Siqueira and Geraldo Borges give TITANS HUNT #1 a decidedly average look. There’s nothing bad in this book, all the characters are distinctive, they stay on model, and the action flows well/is easy to follow. However there’s nothing that really caught my attention either. No eye-popping sequences, or character designs stood out. The best way I can describe is that it adequately told the story, but did nothing to add to it.

All in all, I would give TITANS HUNT #1 a recommendation for Titans fans. The book reintroduces some classic characters, and is generally full of small love-letters to TITANS super-fans. However, the somewhat predictable plot and structure mean that non-fans may want to hold off and wait and see how the series develops from here before they invest in the series.

Have any opinions on TITANS HUNT #1 or this review? Let us know in the comments below, or on Twitter @Comicsverse