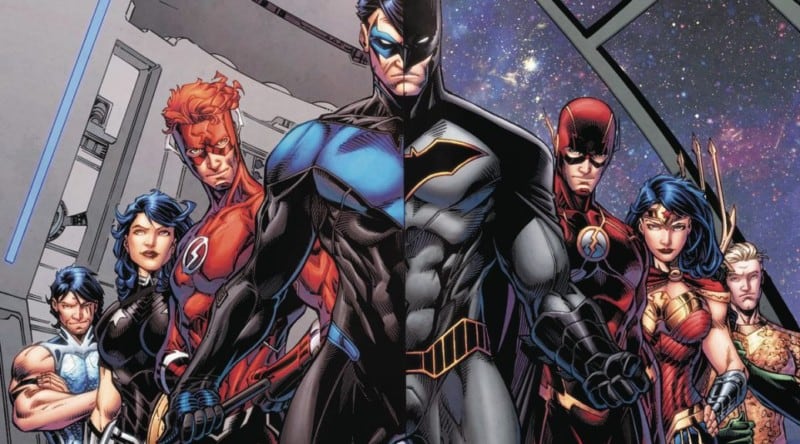 The “Can the heroes really trust each other?” story trope has been told many times, in many different forms. Dan Abnett uses this device in TITANS Annual #1, as the Titans and their former mentors wind up trapped together in a claustrophobic bunker. Although the question is familiar, this issue’s answer is unique. The turns of the plot and terrific characterization of the Titans and League members make this annual issue something special. 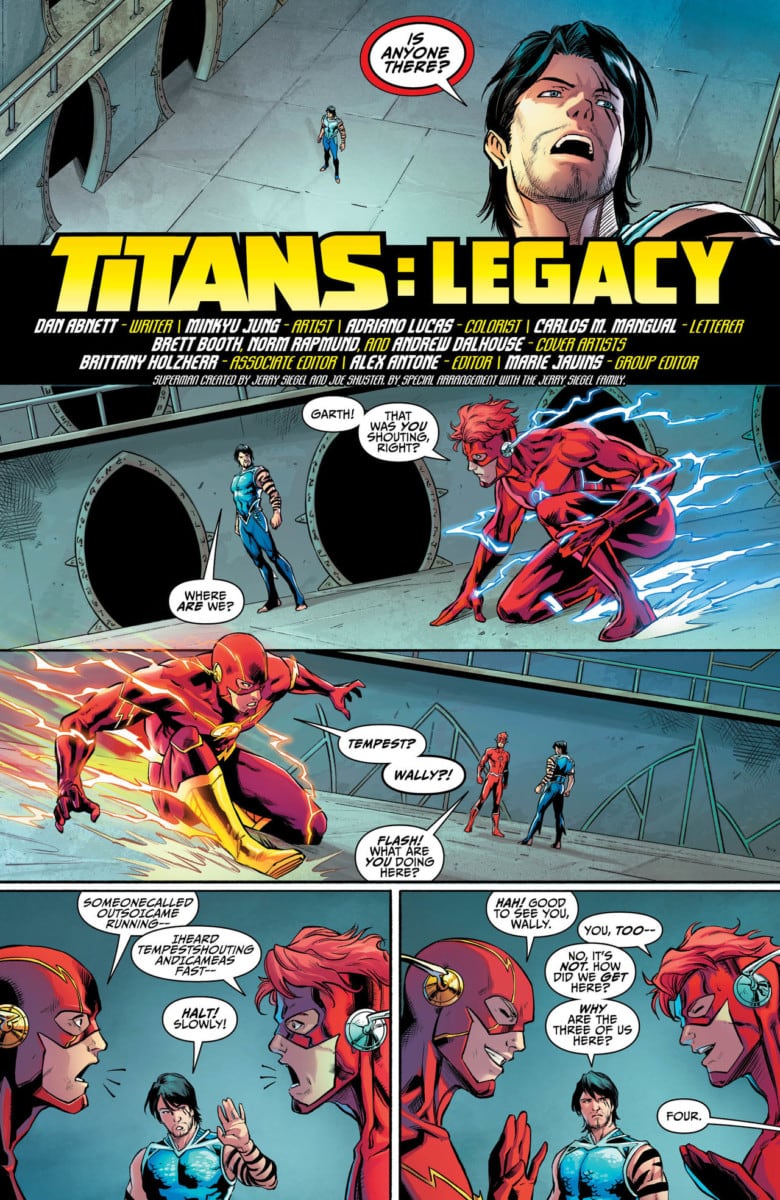 Nightwing, Flash (Wally West), Donna Troy, and Tempest wake up in a massive steel bunker with no memory of how they got there. They quickly realize their former mentors are also present – Batman, Flash (Barry Allen), Wonder Woman, and Aquaman. The teams try to find a way out, but seeds of distrust are quickly sown among them. The scheme is being carried out by a wretched, Gollum-like villain known as the Key, who can unlock doors to parallel dimensions. He’s attempting to free a mysterious being from one such dimension by creating friction among the heroes and using the mounting conflicts to siphon energy from their minds. To provoke them, the Key creates simulated versions of some of the heroes’ most notable foes. The conflicts become both physical and psychological as the heroes fight against their impulses to turn their aggressions on one another.

The interesting thing about TITANS’ take on the “Can we really trust each other?” conflict is the way each character resolves the question. It’s heavily rooted in their own personalities and their attitudes towards each other. Among the most distrustful are Batman and Wonder Woman. Batman, ever the detective, is naturally cautious. Wonder Woman’s distrust seems less warranted at first, but her reasoning is revealed as the issue moves forward. Nightwing and the two Flashes are more empathetic and encourage unrestrained trust toward each other. Tempest and Donna Troy take the middle ground approach, willing to hear out the others. Aquaman… is just kind of a jerk about the whole thing.

READ: Curious what the Titans’ mentors have been up to? Catch up with the Justice League in our review of JUSTICE LEAGUE #17!

What’s really effective here is how the heroes balance each other out. With some more willing to trust than others, the seeds of doubt become difficult to plant. There’s always an awareness among them that there’s a villain in the background trying to rip them apart and turn them on each other. The heroes against heroes angle could’ve easily become clichéd but, thanks to the emphasis on character, the issue never goes in that direction and all-out conflict is narrowly avoided.

The real treat is watching the various mentors and former sidekicks interact with each other. It’s a rare opportunity for readers to compare and contrast relationships, and see just how close the bonds between allies really are. The winners are obvious – Barry and Wally. After everything they’ve been through together, torn apart and reunited, their emotional bond has never been stronger, and that’s reflected in the pages here. The most touching scene in the issue features Barry and Wally running together looking for a way out, while Barry expresses his regret that some of the elder heroes continue to refer to Wally as a sidekick. Barry then makes it very clear that he sees Wally as nothing less than a true equal.

Batman and Nightwing come in second place when it comes to trusting each other. Batman’s lack of full confidence in his former sidekick annoys Nightwing, but it’s clear that they have a mutual admiration for each other. They’re still willing to hear each other out while trapped in strange circumstances. The relationship between Wonder Woman and Donna Troy is much more fractious, with Diana demonstrating clear distrust and borderline contempt for Donna, and the former Wonder Girl being understandably upset at how poorly she’s being treated. Despite the temptation to view Wonder Woman unfavorably here, there’s a reason for her attitude, and it winds up proving to be a great twist for both the issue and the TITANS series overall. 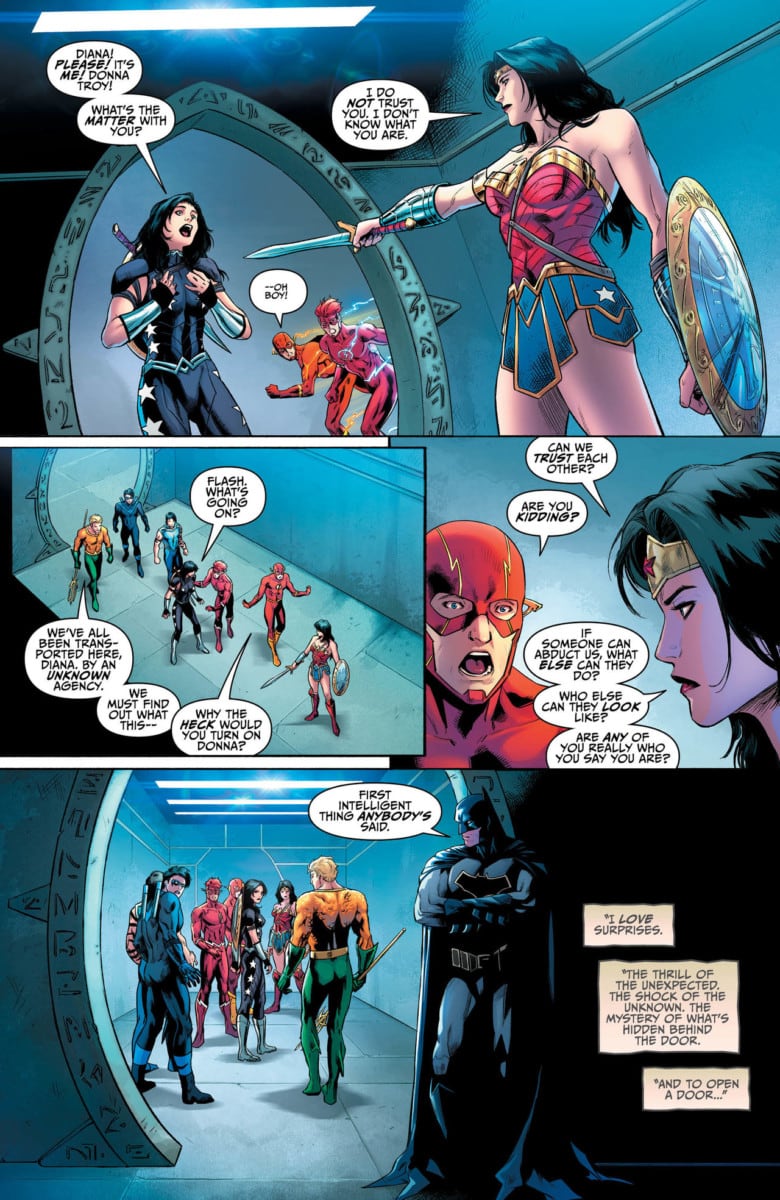 Unfortunately, Aquaman and Tempest wind up being almost completely ignored by Abnett. They seem to have no real relationship other than Tempest referring to Aquaman as “my lord,” a comment which the other heroes humorously use to describe Aquaman throughout the issue. Aside from the one joke, Aquaman serves little purpose other than to act like an entitled douchebag. Aquaman’s arrogant sense of entitlement has always been a problematic character trait, but it’s surprising that it became an issue here, since Abnett has become incredibly adept at writing the character in his own series. Here, Aquaman is just a one-note king with a chip on his shoulder. His relationship with Tempest is barely addressed, and given that TITANS Annual #1 is all about character dynamics, this winds up being the issue’s biggest weakness. Tempest also demonstrates little actual personality and contributes even less throughout the issue, another notable flaw.

Still, the characterization otherwise remains the issue’s strongest quality. The plot is as straightforward as they come, and the villain, the Key, is fairly rudimentary. Yet the issue’s winning charm is that, by the end, you get a strong sense that you know most of these characters a little bit better. Through their interactions in dire circumstances, the reader gets a vivid reminder of what makes these heroes tick, and how they truly view their partners in crime fighting.

Artist Minkyu Jung meanwhile must have had a lot of fun drawing the heroes together. There’s a lively energy in these pages, whether it’s the two Flashes running side by side, or Batman and Nightwing strategically working out the mission. The art becomes even more dynamic when the Key unleashes his villain simulations on the Titans and League members. Jung depicts the frenzy of battle with great verve, drawing explosive streaks of light and power every time a heavy punch is thrown. He handles the emotional moments well too, with a great range of expression to heighten the heroes’ conflicting personas.

Overall, TITANS Annual #1 is a terrific story from Abnett. Despite the Aqua-team related shortcomings, this issue offers great character dynamics. There was definite potential for clichéd plot developments, but the conflicts arise naturally and are resolved with satisfying twists. Most of all, this issue is a powerful reminder of the bonds between allies, and the differences between partnership and friendship.