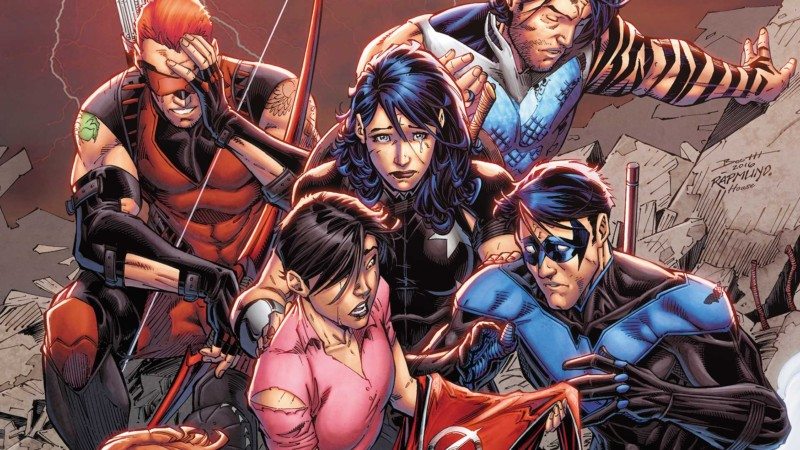 TITANS #6 is the conclusion of the “The Return of Wally West,” story arc. The story has primarily revolved around Wally, aka the new Flash, rejoining the Titans after being ripped from the time stream, and his attempts to reunite with lost love Linda Park. But now, after an extended fight with the villainous magician Kadabra, Wally has been thrown back into the time stream, and may never return again. The series has been extremely fast-paced up until this issue, almost dizzyingly so at times. It’s consequently been relatively thin on characterization, in favor of focusing on the twists and turns of Kadabra’s scheme and connecting the leftover story threads from DC UNIVERSE REBIRTH. Luckily, this time writer Dan Abnett brings characterization to the forefront, with an emotional conclusion to the story of Wally and Linda. 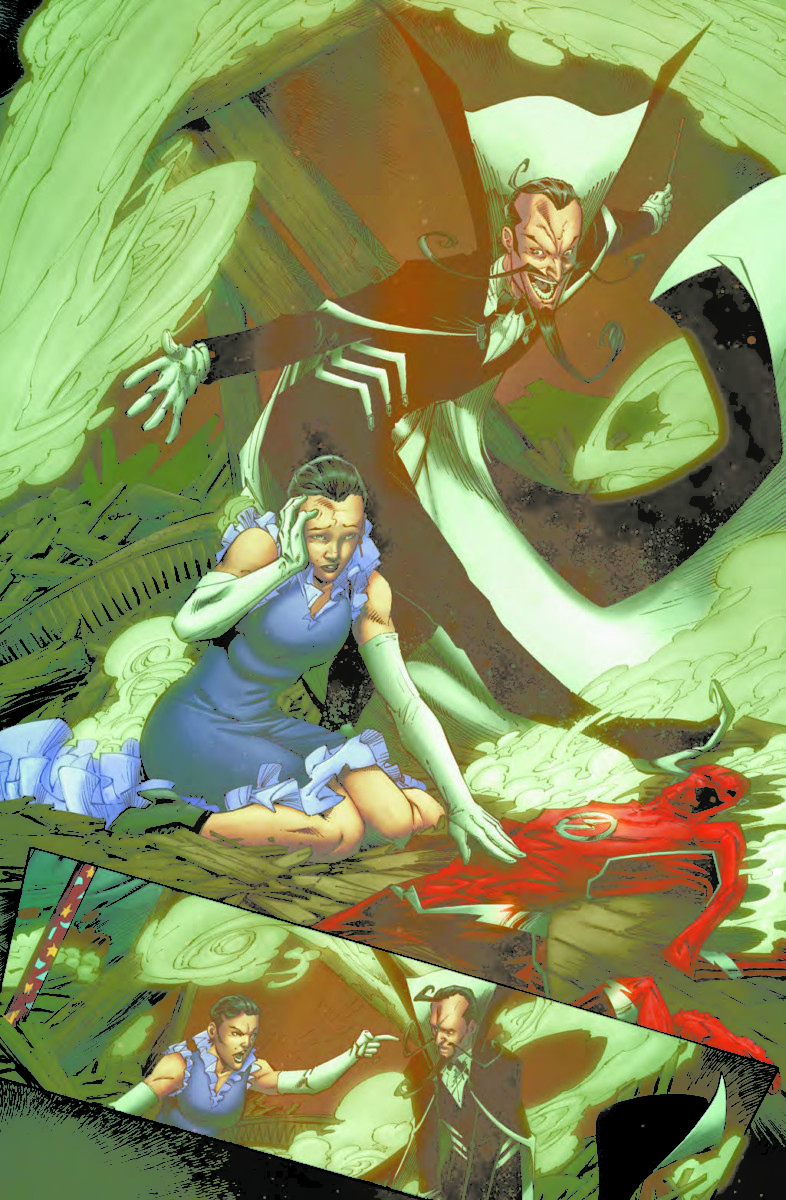 The issue takes place primarily in two settings: Kadabra’s lair — where he mostly just gloats to Linda and the Titans about his victory over the Flash — and Wally’s dream within the speed force, in which he’s achieved a happy afterlife with Linda. As usual, the scenes with Kadabra are fairly one-dimensional. He was an intriguing presence at the beginning of the arc, particularly once we learned that he was involved with the events that tore apart the fabric of the DC Universe. But the battle against Kadabra has quickly turned into a show of theatrics, as superficial and self-aggrandizing as the magician himself.

READ: Find out how Wally West was banished to the time stream in our review of TITANS #5!

The conflict between the Titans and Kadabra’s puppet-Titans could have been used to explore character dynamics, but turned into a 5-issue long action spectacle. Instead, the primary plot-intrigue has come from deciphering Kadabra’s words and intentions to figure out his connection to Dr. Manhattan and his grand plan for the DC Universe. Revelations this issue make it clear that Kadabra, for all his puppetry, is himself a puppet to Dr. Manhattan. It’s not yet clear if he’s a knowing participant or simply a pawn in Manhattan’s schemes, but this issue finally gives us some answers about the probable future of the DC Universe. While the overall plot with Kadabra has been a bit of a let down, it has given us a lot to chew on regarding Dr. Manhattan’s plot — more so than any other REBIRTH series. There’s something to be said for that.

The real emotional crux of this story has been Wally’s attempts to convince Linda that they were meant to be together. And in Wally’s dream, they finally are. But as the two talk together in this happily-ever-after bubble, it becomes clear that Wally may have put his love in the wrong place. In the most poignant single conversation we’ve yet seen in this series, Linda tells Wally a hurtful truth, which rockets to the core of their would-be relationship. This issue hearkens back to DC UNIVERSE REBIRTH in several ways, both with connections to the aforementioned WATCHMEN plot, and in Wally’s return to the speed force. The first time, it was the love Wally shared with Barry Allen that brought him back. This time, love brings Wally back again, but not in the way he thought. 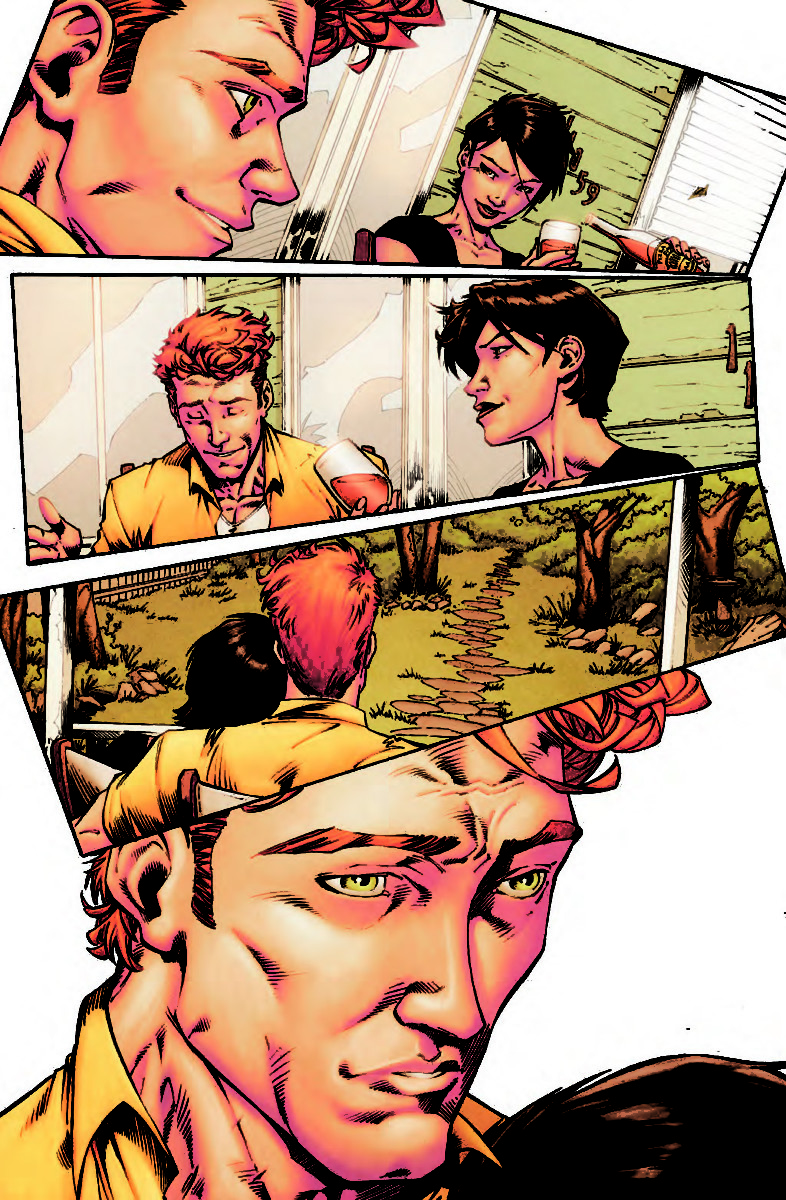 The lesson here is less about love, and more about truth. For Wally, his love for Linda became more about obsession than genuine feeling. But his love for his friends, without him even realizing it, was pure and real. Wally’s relationship to the other Titans ultimately becomes his most important connection to the world. Hopefully this new understanding will set the stage for more genuine development for the rest of the Titans. But for now, in an arc that’s been largely two-dimensional, a lesson about the illusions and reality of love is a surprisingly moving way to connect readers with these heroes once again.

READ: Discover how Wally West reunited with the Titans in our review of TITANS REBIRTH #1!

One element of these six issues that’s always connected is the artwork by Brett Booth. The action that has swamped the story has been vividly rendered by Booth with an epic and ferocious quality. TITANS #6 continues this tradition. While Booth’s panels are often overstuffed with characters battling each other, the effect is viscerally pleasing. In a storyline that’s all about spectacle, it’s appropriate that these panels offer dazzling theatricality. The action is classic pulp fun, with the variety of Titans and their unique costumes providing a pleasing sensory overload. This time, the action is balanced with the touching Wally and Linda scenes, which are given a hazy, dreamlike quality. The color is integral here, with sublime work by colorists Andrew Dalhouse and Carrie Sirachan. Their yellow-orange hues create the effect of a setting sun on Linda and Wally’s time together. The characters’ emotions are exaggerated just a touch, enough to let you know that you’re in a dream. A dream, but a good one.

With always-engaging art by Booth, and a storyline by Abnett that’s come full circle, this a satisfying installment of TITANS. While the arc has been on the one-dimensional side, it’s allowed for a solitary focus on Wally West that’s necessary, considering his absence in the NEW 52. And now the stage has been set for future arcs that can dive into the other Titans. Meanwhile, intriguing new information has been planted heading towards the inevitable DC / Watchmen showdown. A surprise appearance of a fan-favorite DC character at the very end of the issue also provides an indication of where the story might be going, and another possible connection to Watchmen. Overall, TITANS #6 is a satisfying conclusion to “The Return of Wally West,” and a hopeful indicator of even better storylines to come.