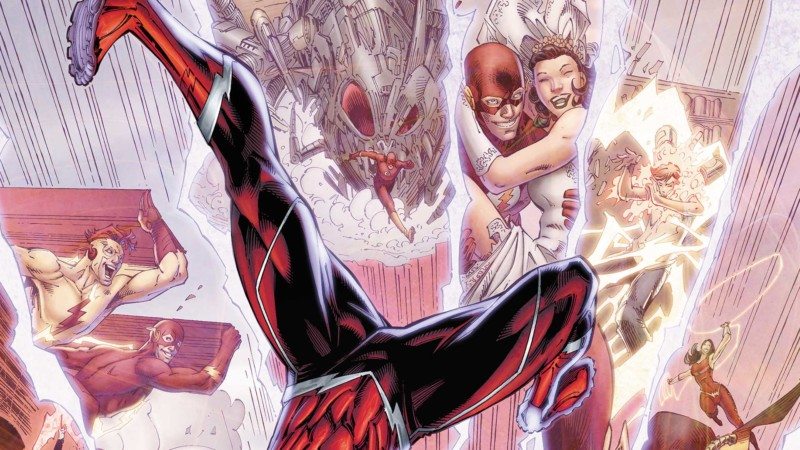 The reunion of Wally West and the rest of the titans in DC Comics’ Rebirth is certainly one of the greatest things about TITANS. However, it seems that Wally is going to disappear faster than the speed of a flash. In TITANS #5, Wally saves his friends and the love of his life by facing off against his toughest enemy, and it’s not Kadabra: it’s time.

READ: Need to catch up? Take a look at our TITANS #1 review!

Kadabra is fame-hungry and the only thing holding him back from being the most famous magician is Wally. Every time Kadabra is close to achieving glory, Wally gets in the way and stops the villain’s diabolical schemes. It’s easy to underestimate Kadabra, as he appears to be a silly magician from a children’s cartoon, but don’t let his looks fool you. Kadabra’s master-plan in TITANS #5 to get rid of Wally is extremely cunning.

In the last issue, Kadabra targeted Wally’s love interest, Linda. Kadabra knows that the Titans will always be there for Wally and that they’re strongest when together, thus Kadabra gets the doppelganger of Lilith to manipulate the psionic powers of the real one in order to tear them apart. When the latter uses her psychic powers to find Kadabra and Linda, she sees three locations. The Titans split up and spread out to different parts of the country in order to defeat the rogue and save the innocent. 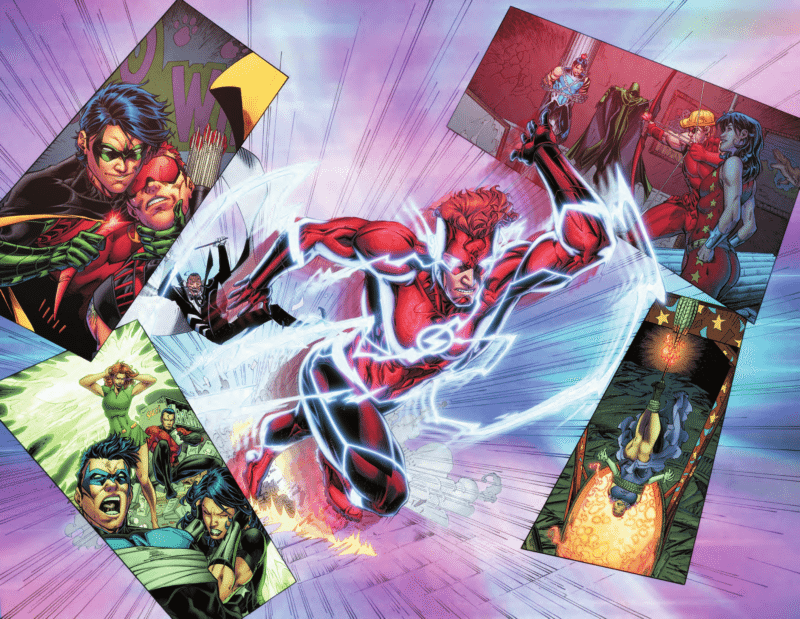 The twist being that Linda wasn’t in any of the three places. She’s tied up in Gotham City and is about to fall into a burning cauldron. The rest of the Titans are struggling against the doppelgangers, as Kadabra has amplified the powers of the latter. The magician tries to intimidate Wally by gloating that it’s impossible to save everyone and that he’ll have to choose whom to rescue. Wally, being the altruistic hero he is, promises to save them all, even if that means he’ll disappear again. It’s a clever move on Kadabra’s part to use Linda as a pawn and divide up the Titans. Now Wally has to go faster than it’s safe for him to do so, as when a speedster goes too fast he risks being lost to the Speed Force and getting stuck outside of time, and that’s exactly what Kadabra wants.

READ: See how the team was launched in TITANS REBIRTH #1!

Wally brilliantly handles the challenging situation with fast, strategic thinking. Just how teachers advise students to answer the easy question first, Wally takes down the fake Robin in Keystone City as it was the simplest task. As a result, Speedy is saved but Wally still has to rescue the rest of his friends and Linda. Meanwhile, the fake Lilith is frying the minds of Nightwing and Donna Troy in Coast City. Since Wally has no knowledge of how fast psionic powers can work, taking down the psychic doppelganger is his top priority. 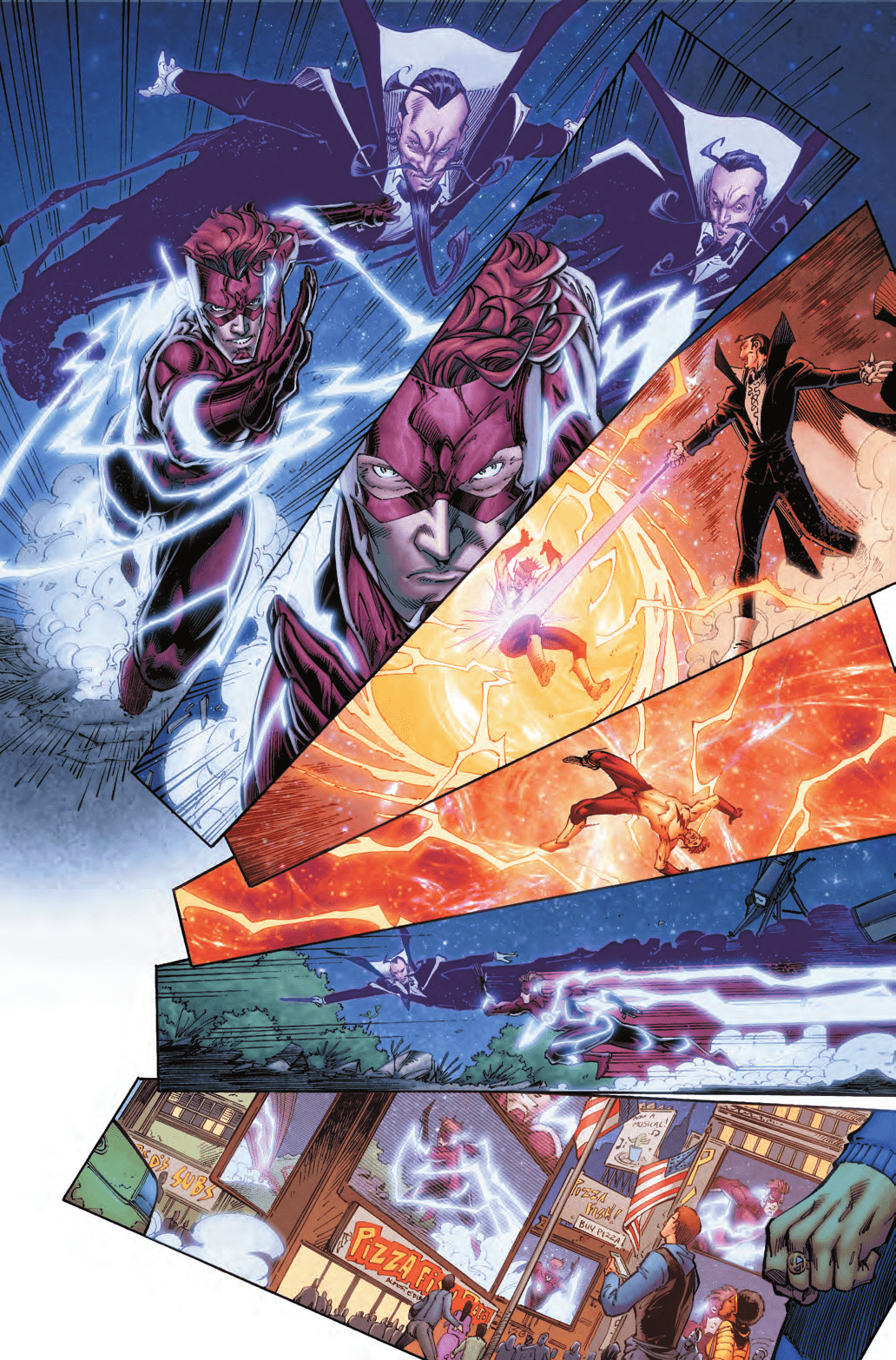 Kadabra, however, is hell-bent on making the challenge more difficult for his foe. While Wally races to save Nightwing and Donna, Kadabra tries to distract Wally by taunting him. Kadabra broadcasts Wally’s struggle for the world to watch; so that everyone can witness Wally’s defeat and see that Kadabra is the ultimate magician. Wally completely ignores the rogue and gives the mission his full attention. In the previous issues, Wally was quick to fall into self-loathing, so kudos to him for blocking out those negative voices in TITAN #5.

My favorite part of the plot, which is also the most tragic, is Wally’s unconditional love for Linda. Previously, Wally was lost to the Speed Force, met Linda and fell in love with her. The present day Linda only knows Wally’s name, which is heartbreaking. Yet, Wally goes above and beyond to save her. He might disappear forever and they’ll probably never be together again, but he can accept that as long as Linda is safe. 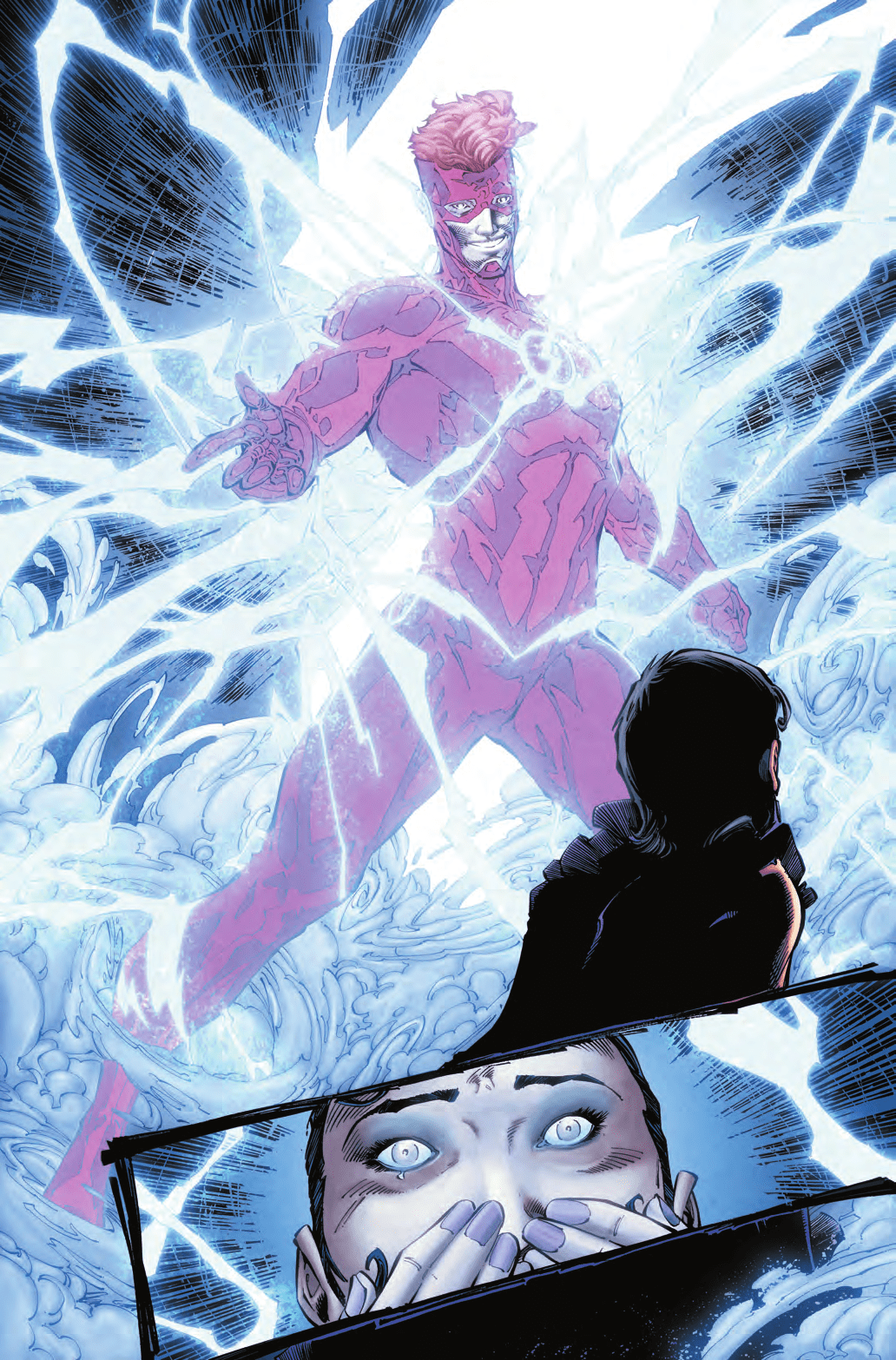 The art in the panel where Wally speaks to Linda is absolutely stunning. The mesh of blue and black ink with white in the center makes the background look absolutely electric. Norm Rapmund did a fantastic job in portraying the facial expressions. I can clearly see the sincere love in Wally’s eyes, which makes me wish someone looked at me the way he looks at Linda. Linda’s eyes are filled with pain, as she doesn’t even recognize the man who loves her so much. Wally extends his hand and before Linda can even touch it, Kadabra makes the Flash disappear. Thus, Wally is seemingly lost once again.

Overall, TITANS #5 is an action-packed issue with gorgeous art and brilliant characterization. I’m eagerly looking forward to see if Wally comes back in the next installment, and if he does, I’m curious to know how!