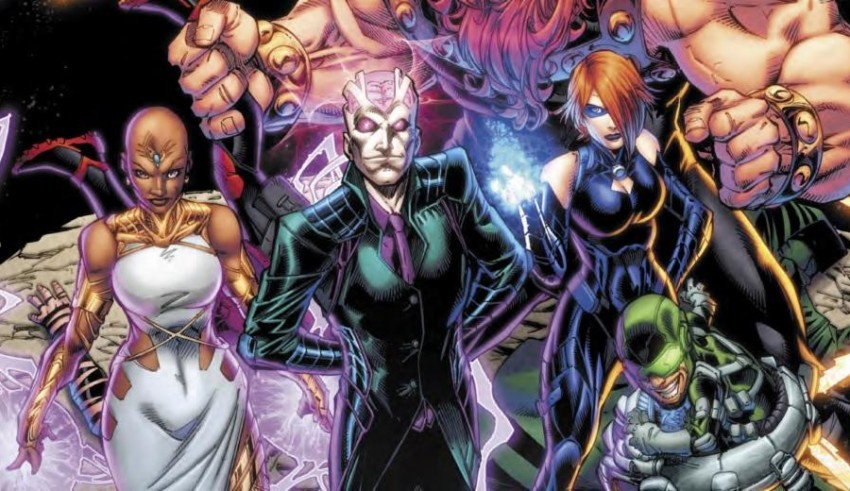 TITANS #10 opens with a rescue mission that turns into an all-out brawl between the Titans and their classic foes, the Fearsome Five. There isn’t much more than that to this issue, but it still manages to invoke the classic TEEN TITANS adventures of the 90’s, which makes it plenty enjoyable for new and old fans alike.

The Fearsome Five start the issue in classic villain fashion, gloating over their capture of Nightwing and Flash, while discussing how they plan to sell off the two heroes for profit. This lasts for all of two pages before the remaining Titans (Omen, Donna Troy, Arsenal, and Tempest) burst in to begin the epic fight. The battle takes up most of the issue, but writer Dan Abnett is smart enough to cast both unique and equal clashes to keep the action fresh. Telepaths Psimon and Omen do battle, as Mammoth and Tempest test their strength. The unique challenges come from watching Donna and Arsenal go up against Jinx, who turns their luck against them, and Shimmer, who easily disposes of the scraps. 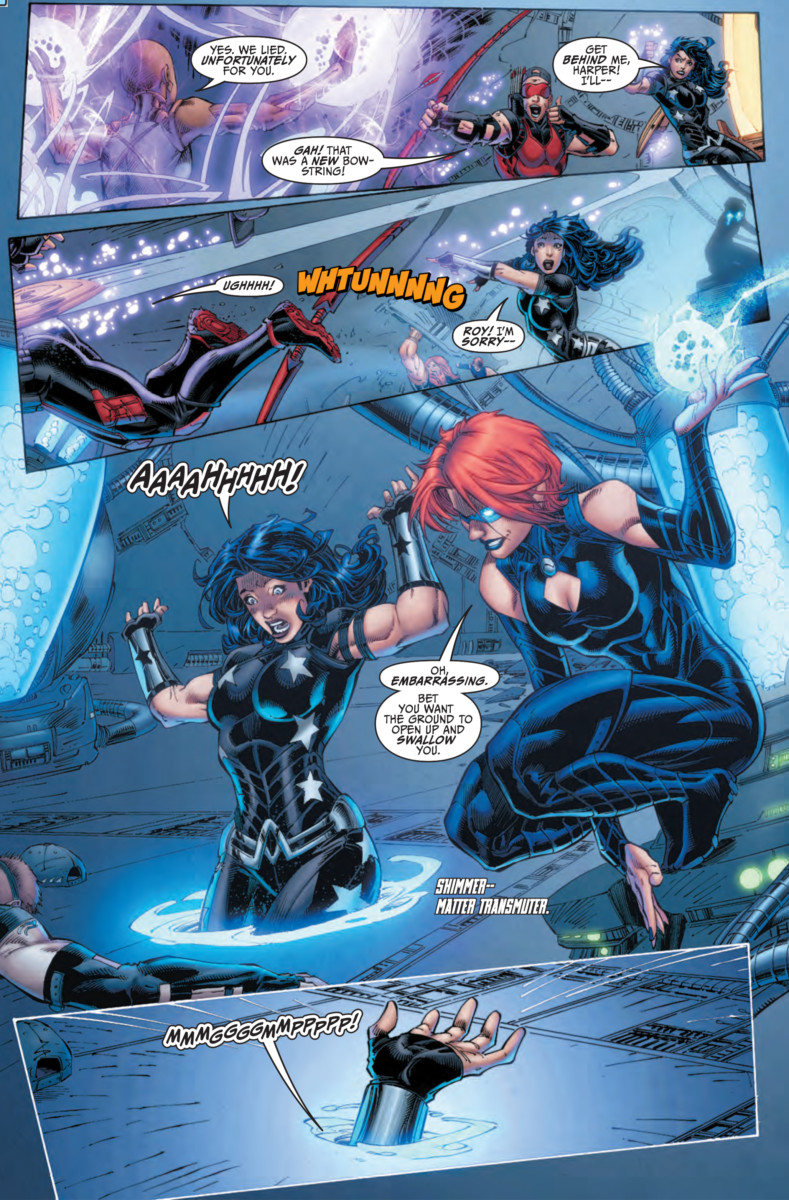 All these different angles keep the massive brawl interesting and allow the reader to focus on whatever brand of fighting they like best, be it fisticuffs, mental warfare, or trickery. The amazingly clean artwork by penciler Brett Booth and inker Norm Rapmund is a tremendous asset as well. Despite all the chaos happening, every fight is clearly defined, with the proper focus on the combatants and what they’re capable of. It’s the kind of work I remember seeing in TEEN TITANS comics of the 90’s — crisp, colorful, and fun to look at. Every element is brought to perfection here by all involved, without seeming dated.

READ: Want more Titans, even of the teen variety? We discuss the classic animated show here!

Sadly, the impressive fight doesn’t go well for the Titans, as the Five overwhelm them. Luckily, help arrives in the form of Bumblebee, who engages the entire team single-handedly. This version of Bumblebee might be new, but she’s pissed at the Five for attacking her husband Mal (formerly Herald), and she puts her anger to use here. What’s really impressive is that Bee might be angry, but she’s in full control of it, out-maneuvering the Five and using her shrinking and energy abilities to effectively neutralize their powers. 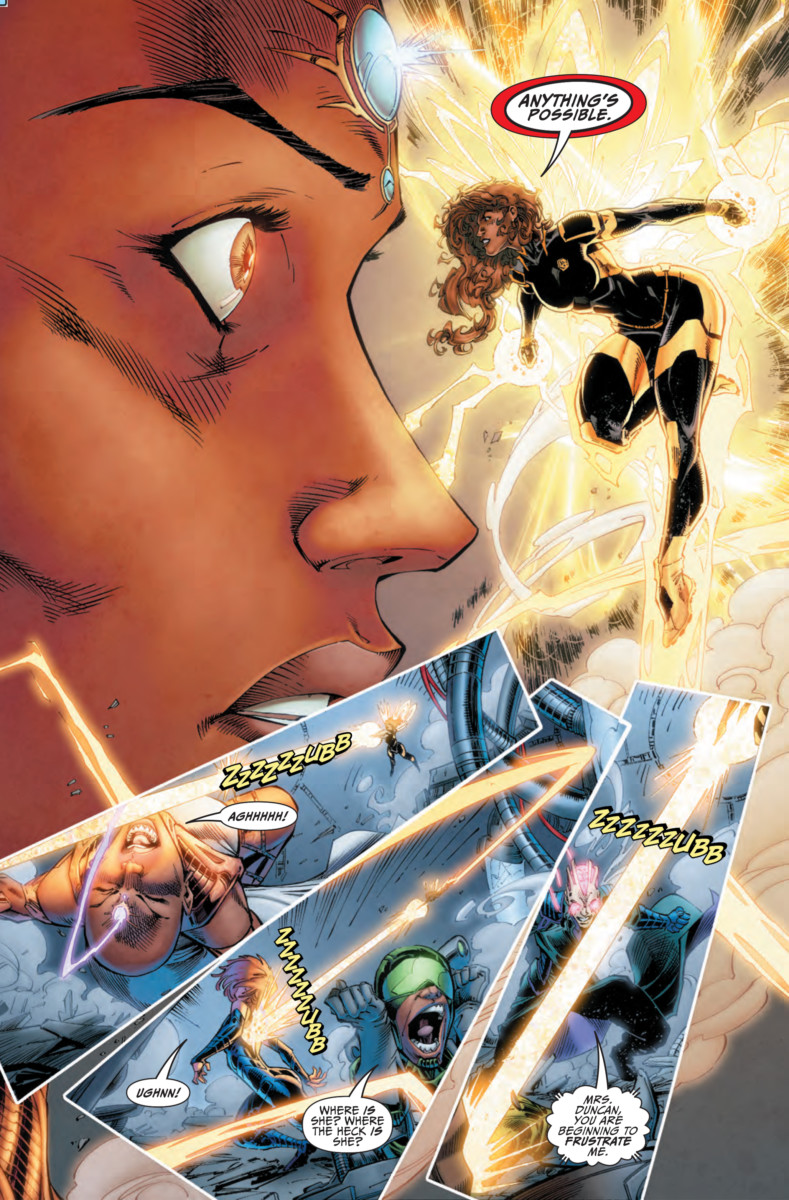 Bumblebee’s still vulnerable to Psimon’s mental attacks, but by putting his focus on Bee, Psimon allows Omen to knock him out with a single punch. It’s not enough though, as we see Psimon has effectively removed Bumblebee’s memories of her husband; Mal arrives at the scene and gets no recognition from his wife. The issue ends with the Titans musing on this, new information that shows H.I.V.E funded the Fearsome Five’s work, and a hint of things to come with a shot of the Titans’ archenemy Deathstroke.

READ: Want to see Marvel do a team of young heroes? Take a look at our review of CHAMPIONS #7!

TITANS #10 is a fairly simple issue, but sometimes a good story doesn’t have to be complicated. The fight is epic, with artwork that matches up, and an ending that manages to effectively end one arc and begin another. True, there’s not a lot in terms of story, and there might be a tad too much nostalgia for longtime Titans fans (promising “The Lazarus Contract” in the next issue — a bit on the nose). Yet it’s still a fun read and there’s really not much to hate in the twenty-two pages of the installment. Sometimes, a good fight and a few hints are really all you need.