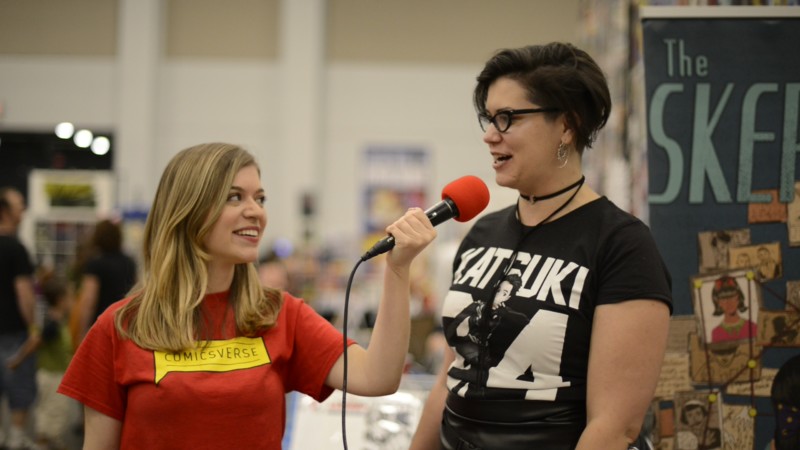 At Tidewater Comicon 2017, ComicsVerse got the opportunity to meet writer Tini Howard. Tini broke onto the scene with her winning entry in the Top Cow Talent Hunt in 2014 and has since gone on to write MAGDALENA, POWER RANGERS: PINK, and her creator-owned series THE SKEPTICS. In our interview, Tini lets us in on her history within the comics industry, describes her experience writing characters like Magdalena and the Pink Power Ranger, and offers great advice for aspiring writers.

Tini Howard and The Valkyries

Tini Howard is a former member of the Valkyries. Created by writer and artist Kate Leth, the Valkyries are a group of women who work in comic book stores. Within this group, its members find a safe place where they can share the unique challenges that come with being a woman in comics. While the Valkyries don’t put their official seal of approval on books, the support they offer is organic and genuine. Tini describes the Valkyries as 600 of her closest friends with whom she could share her work. In addition, some of her best friends have come from the Valkyries.

Tini shares her experience in winning the Top Cow Talent Hunt, as well as continuing her work with MAGDALENA. When writing her submission for the Top Cow Talent Hunt, Tini was instructed not to reinvent the mythology or create a new character. However, she did both of those things. As a result, Tini continued working for Top Cow and contributing to MAGDALENA. She praises her cowriter as well as their artists for transcending the house style and creating a vibrant horror book.

Furthermore, Tini was a Power Rangers fan growing up, and there were plenty of elements she was excited to bring to POWER RANGERS: PINK. Among these include addressing Kim’s relationship with Tommy, showing how Kim’s life has changed in adulthood, and emphasizing her friendship with Trini.

Tini also has a Black Mask series titled THE SKEPTICS. This four-part series follows a group of teenagers who lie and claim they have superpowers to stop World War III. Tini describes THE SKEPTICS as “Archie meets Watchmen.” If that description alone doesn’t have you sold, be sure to see what else THE SKEPTICS has in store.

Advice from Tini Howard, and What to Look Forward to

Tini rounds out our interview with advice for aspiring writers: read anything and everything. With Tini’s experience in comic shops, comics journalism, and as a comic book writer, she imparts on us to learn everything we can.

July will see the release of RICK AND MORTY: POCKET LIKE YOU STOLE IT by Tini Howard. In addition, look out for new announcements at San Diego Comic Con! In the meantime, you can keep up with Tini Howard on Twitter.