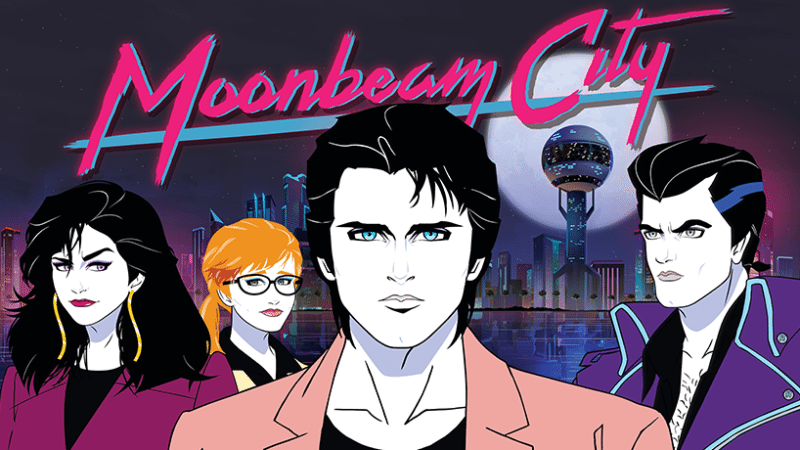 Sex and violence. Action and suspense. Neon and pastels. If this sounds like a description of New York Comic Con 2015, then you are only half right. On Saturday night, after a long day of getting beat down by this years insanely large crowd, Comedy Central offered a showcase of their new stylized animated sitcom MOONBEAM CITY. Not only were attendees treated to an as-yet-unseen episode, but they were able to hear from the creators themselves concerning the inception of the series, their creative process, and what fans can expect in upcoming episodes.

LISTEN: For another great mystery, listen to our podcast about BATMAN: THE RED HOOD!

MOONBEAM CITY follows the exploits of Dazzle Novak (Rob Lowe), a cop drenched in puns and sex appeal, as he navigates the laser-beam-lit, crime-ridden streets in search of justice. Hopefully he can save the day without interruption from his foil and fellow cop, Rad Cunningham (Will Forte) or his hard-hearted chief, Pizzaz Miller (Elizabeth Banks). The series is an impeccable parody of 80’s action shows like MIAMI VICE and has a style and art direction influenced by fashion, music videos, and visions of the future from that time (notably, films like TRON, the prints of Patrick Nagel, and the original GEM AND THE HOLOGRAMS cartoon).

Panelists included executive producer and creator Scott Gairdner (CONAN), executive producer Tommy Blacha (ERIC ANDRE SHOW, METALOCALYPSE, DA ALI G SHOW) and director Mark Brooks (METALOCALYPSE, BLACK PANTHER). They were very excited to be talking and presenting the fruits of their labor, and spent a great deal of time bouncing jokes back and forth, getting the crowd riled up.

After a brief presentation, the audience was granted a sneak peak at a particularly topical MOONBEAM CITY episode called “Cop Con.” Dazzle is invited as a panel speaker to the annual police convention, Cop Con, when the murder of a police informant forces him and his team to investigate every cop in the city. The episode was priceless, and was possibly the best episode yet. The parallel to Comic Con was fantastic, the endless puns were stellar (the dining destination for Cop Con is “Arrestaurant”), and it did an incredible job of turning harsh subjects, such as police corruption and brutality, into some pretty hilarious commentary.

The series creators ended by urging everyone to watch the show so it can continue, and offered insight into what is upcoming for the end of season one. In the next few episodes, the show will be featuring a list of guest voice actors, such as Adam West, Susan Sarandon, Andy Richter, Molly Shannon, Patrick Warburton, Powers Boothe, Trace Adkins, and more. Be sure to check out MOONBEAM CITY, Wednesdays on Comedy Central.