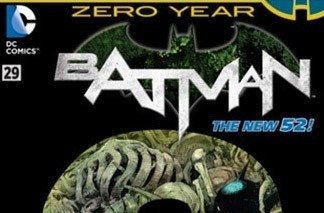 Truth be told my reviews here should be the Batman : Eternal 39.5 and Batman #29 review, it was quite a bizarre throw in by those in charge to drop a nearly three quarters of the way through story that initially made me think: 1) I’d bought the wrong line in comic books and 2) What the heck is going on? After calming my fears and having a quick read up on the web I took to sitting down and enjoying myself and even though we know not what has happened and for why. This one small issue of Batman: Eternal has stoked the coals enough to get the fire roaring for the 9th April 2014 (Issue #1 release date) and I’ll be reviewing them on a monthly basis all be it they’ll be released on a weekly roll-out; I’m not a machine!?!

When Batman #29 arrived it was a return to normality of the Riddler’s giant puzzle where he’s been holding all of Gotham hostage and manipulating Gotham’s weather, it’s millions of residents, it’s Police force and our grotesque bone abundant doctor into making the Batman’s day not as pleasant as he’d like it. Luckily though he has a very large, black Bat Blimp (I kid you not) which he uses to get upto the Riddler’s giant green weather balloon (with Purple Question Mark) which is controlling the weather by WiFi it seems; it’s all gone a bit “Holy Purple Lightning Batman!” this issue.

There are some outstanding pieces of artwork given to us from Greg Capullo and Danny Miki; both stark and intense, barren of colour and so much of it, it dazzles you. Unfortunately I have a bugbear with this issue, even with the issue #28 Eternal break I can help feeling that this Riddler tale has gone on a bit too long and it hasn’t finished yet. I know this may be classed as a spoiler but still the Riddler’s story is unfolding and it’s becoming less and less interesting; even with a 1966 rock hanging by a thread moment. We know as a fact that Scott Snyder is a Batman writer and I cannot ever take that away from him nor will I, but this story is starting to become stale.

It’s a bit of a shame really when you’ve got such fantastic wrapping paper and the gift inside isn’t really what you wanted; I’m guessing it’s true that you can’t have everything the way you want it all the time. I know that other people will love it but I’m here to be honest and I hope you can at least appreciate that I am.