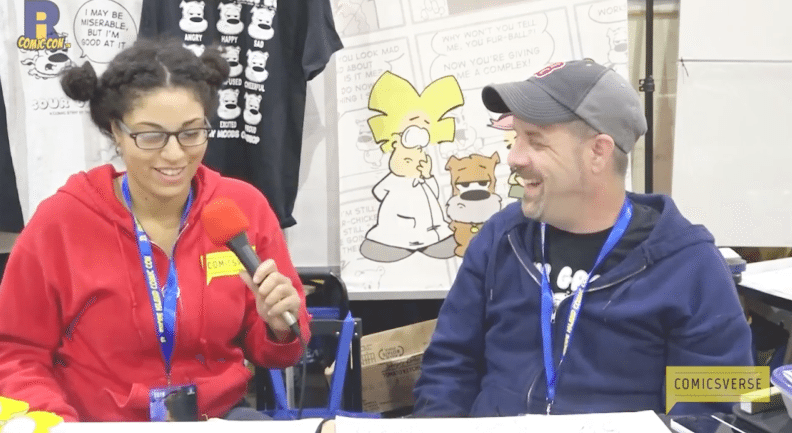 We had a happy and totally unexpected encounter with SOUR GRAPES creator (and Rhode Island local) Tim Jones at Rhode Island Comic Con 2016. As the only self-syndicated comic creator from the Providence area at Con, it came as a nice surprise that we managed to snag this Tim Jones interview at his second year at RICC.

Surrounded by huge names in comics, it was refreshing to sit down with him in Artist Alley and delve into what it takes to make it into a newspaper, beginning, of course, with a formal introduction to the beloved quirky characters of SOUR GRAPES.

WATCH: Catch another interview from RICC, this one with NAILBITER‘s Mike Henderson!

Tim started SOUR GRAPES in 2013 as a fun way to explore the shortcomings of everyday life. SOUR GRAPES is a comic strip about “Aesop,” a miserable, smart-mouthed, flying dog who puts up with odd friends and a troubled life that they all share. Tim said his favorite thing about the comic is that it’s painfully relatable to readers, and from what I’ve read, it has a clever way of saying what everyone’s thinking. Aesop is adorable, sure, but it’s his sarcasm and witty punchlines that win the day.

After a simple phone call, SOUR GRAPES found its way to Tim’s local newspaper, the Smithfield Times. That was the first news publication to print SOUR GRAPES, and his faith in Aesop carried them into several more. Now, SOUR GRAPES has become an anticipated weekly comic strip in several papers across the Rhode Island area.

As for life outside the paper, Tim said he’s considered featuring his prized canine friend in an adventure book, but he wants to stay focused on expanding and possibly bringing SOUR GRAPES to papers around the country.

We hope you enjoyed this Tim Jones interview! You can keep up with Tim Jones and Aesop on Facebook and Twitter @SourGrapesComic. Feel free to add him on Facebook here, and don’t forget to check out his work over at his website here!