The next installment of THOSE SHADOW PEOPLE #4 will be released on November 16th! Pages 1 through 3 are available now, and pages 4 through 7 will be coming out next. The rest of the issue is TBA. For those of you who haven’t checked out Phil Buck’s webcomic, it’s quite an interesting one. A girl, Sarah, has a mad scientist father named Dr. Richard Saber. Dr. Saber has created a portal to another dimension, and as result, Sarah acquires superpowers. Two different factions of villains exist in the comic, and both are after Sarah and her father. With the help of Dr. Byow, Saber’s friend from the Shadow Realm, they just might be able to escape and save both of their worlds. In Phil Buck’s new issue of THOSE SHADOW PEOPLE, the series is only getting better.

READ: Can’t get enough of THOSE SHADOW PEOPLE? Click here for a review of an older issue and their second EP, MISSION ACCOMPLISHED!

The comic starts off with Sarah having just blown up a cabin due to her anger at her father. In the previous issue, it was revealed that her mother was actually in the dimension that Dr. Saber had opened a gateway to, and Sarah didn’t take the news very well. She had become increasingly angry throughout the previous issues, and her frustration definitely doesn’t stop here, with most of the issue acting as a continuation of Sarah’s extreme and sometimes misplaced anger at her father.

Sarah’s anger is actually what much of the plot seems to revolve around; her anger is what leads her to question her father, which in turn leads the two of them back to her father’s house. These events set into motion the climax of the issue and the consequences that follow. The plot has been gaining momentum in the last issue or so, but in this issue, it really starts to intensify into something that causes the reader to crave more after the cliffhanger at the end.

Phil Buck’s characterization in this issue is somewhat lopsided. Some characters are given very thick characterization, such as Sarah, Dr. Saber, and Dr. Byow. These characters, though given thick characterization, aren’t particularly likable. Sarah has seemingly uncontrollable anger at everything that her father says or does, and Saber tends to give much more care to his experiments than his daughter. He hides behind the idea that he is protecting her, but his arguments are transparent, and he still treats her like a science experiment. Byow is comparable to Dr. Saber, but is more strong-willed and less sniveling. Scientific pursuits are definitely an interest of his, but he seems to be more utilitarian than Saber.

Others characters, however, are quite lacking in their characterization. Most of the characters seem a bit one-dimensional and are only really memorable for their outlandish appearances. However, because many of these characters are quite minor, it makes sense for Buck to spend more dialogue time on his main characters and to just use visuals to try to characterize the less important ones. Regardless, it is disappointing to have so many visually interesting characters who do not get much dialogue or characterization.

READ: Want more on THOSE SHADOW PEOPLE? Check out a review of one of their EPs, LIGHT SIPHON!

Speaking of visuals, wow! The art in this series really tells as much of a story as the writing. The art in the scenes that take place on Earth is fairly normal; that is, normal minus the super creepy, evil guys in masks and the moments when Sarah goes into crazy dark matter mode. However, a lot of the colors seem to be fairly muted and dark. It seems as though the art that takes place on Earth is lacking, although this could be purposefully done by the artist in order to create a stronger juxtaposition between Earth and the Shadow Realm.

The art of the Shadow Realm is quite different from the art of Earth. Despite the name, the Shadow Realm’s art is much more colorful and bright. Sometimes the visuals are even downright strange. Strange, however, not in a bad way. The appearance of the characters is extremely eccentric, and it makes for some spectacular art. Dr. Byow has a wonderfully contrasting electric blue face up against his dark hooded cloak. Easy Wind arguably has some of the best art; he seems to have a galaxy located inside of his cloak. Other characters include a large man with a hard hat, a skeletal face called Heavy Duty, and a mysterious woman with a red bodysuit and a mask reminiscent of Harley Quinn. 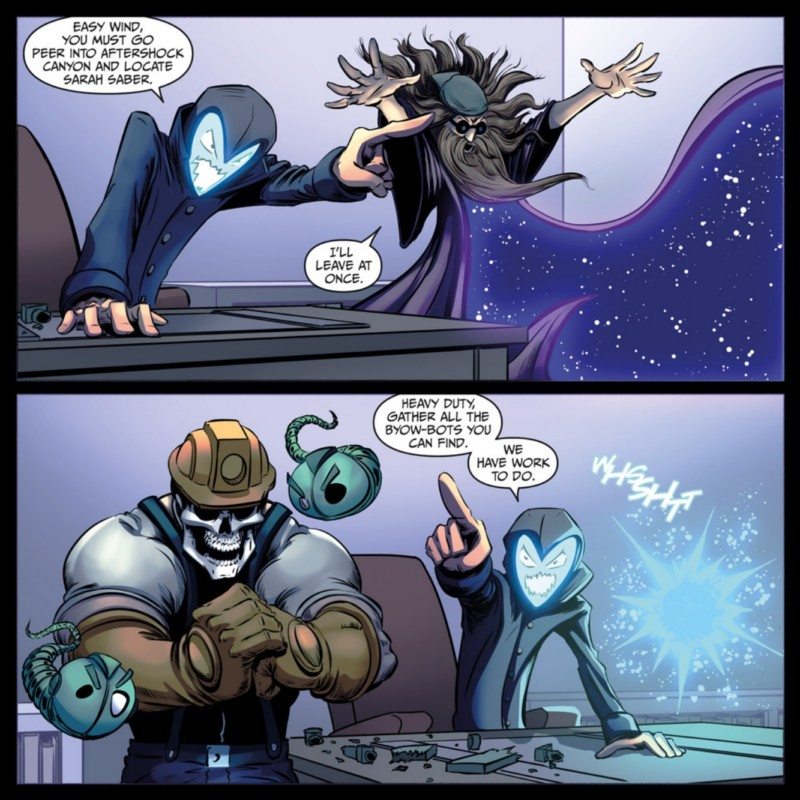 Overall, THOSE SHADOW PEOPLE #4 from Phil Buck was quite satisfying. The lack of characterization leaves room for improvement; however, the art and the plot make reading the issue worthwhile. It also ends on a startling cliffhanger, leaving the reader unsure of where the plot will go next and making THOSE SHADOW PEOPLE #4 a must read!

THOSE SHADOW PEOPLE also has a jazzy experimental rock EP that goes along with this issue, entitled TWENTY YEARS. To check that out, click here!