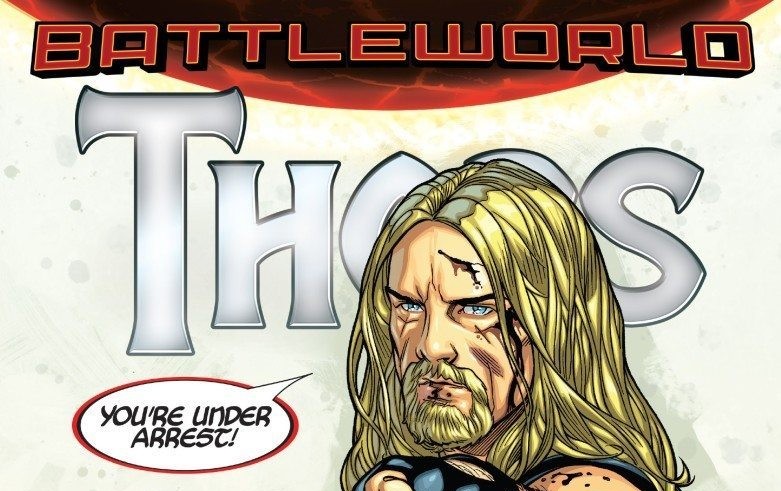 The conclusion to THORS is finally here, but will it live up to the big reveals and noir drama that it promised? Not really, but I have to admit that it sure was a fun ride.

This issue begins where we left off so long ago, seriously it was a month ago and I actually forgot this was going to have a conclusion, with the Ultimate Thor and Thor the Unworthy going back to Doomgard to pursue the killer, Rune Thor. Runey, as Thor the Unworthy lovingly calls him, isn’t going to go down without a fight. A battle breaks lose with a Thor versus Thor free for all brawl breaking out. However, a blast from a past that I didn’t even expect to appear in this series comes through to stop the senseless fighting and save the day.

READ: While the Secret Wars may not be quite finished, All New All Different Marvel is in full swing. Check out our review of ALL NEW ALL DIFFERENT AVENGERS #1

I have to say, as I have said before, that I was very pleasantly surprised by THORS. It had a very strong start, and I really enjoyed that Aaron focused in on the noir and cop elements of this concept. However, in this last issue that aspect is largely left to the way side. While Runey, sorry Rune Thor, is a good villain in many aspects, he doesn’t really have one of those great villain speeches, which noir can really lend itself well to. That disappointed me.  The addition of (Spoiler Alert!) Jane Foster from the last Thor run was a very pleasant surprise, however, especially because the Fosters from every universe were getting killed. She definitely needed to insert herself into this narrative, something that the show SUPERGIRL is also very concerned with, because she was victimized so heavily in this comic, literally in this run but historically since the beginning of THOR comics. In the same vein, the revelation that Doom is not actually a god, a carry over from the overarching Secret Wars arch, is a little tiring; however, it is redeemed by the fact that it is couched in what it means to be a Thor and ultimately worthiness.

READ: With the Secret Wars still raging on it’s time to get updated. Check out our review of SECRET WARS #7!

This leads to what was my favorite part about this last comic, the final interaction that the Ultimate Thor has with Jane Foster and his final speech. Jane and Thor’s interaction is small, but I have to say that there was something very touching about it. Maybe it was the fact that Thor said he saw Jane’s eyes or it’s Jane asking for advice, but regardless of why, it’s a touching moment. And where this issue got the villain monologue wrong, it got the hero voiceover totally right. Thor’s monologue begins, “For the first time in my life…I feel worthy. I’m just sorry that it took the end of the world to make it happen.” I don’t want to literally print the whole thing here, but I have to say that in these four short issues, Aaron and Sprouse have taken the reader on a lovely journey with Ultimate Thor and when these lines are written I felt that they were earned. Thor has changed. Thors have changed, and I was happy to watch Thor go on that journey.

The art of this issue was not neccesarily my favorite art style, but I have to say that it was beautiful. Jane as Thor was particularly nice in Sprouse’s style, and he has a particularly great grasp of Thor the Unworthy’s look. Something that was focused on a lot in this issue was the various hammer-like items that the Thors carry, and I have to say that the art on these objects was particularly striking. I couldn’t help but look at the beautiful detail of the way the words were laid out on each of these items, and it is clear that those images were crafted with care much like Mjolnirs would be created if they actually existed.

READ: Want another property that has recently switched gears? Check out our review of ALL NEW WOLVERINE #1!

On the whole, while this issue suffers by focusing less on the noir elements of this short arc, the whole series is still definitely worth a binge read if you missed it on the first time around. And now it is time to grab some mead and get excited for THE MIGHT THOR #1 coming out next week. Can’t wait to see you, Jane!