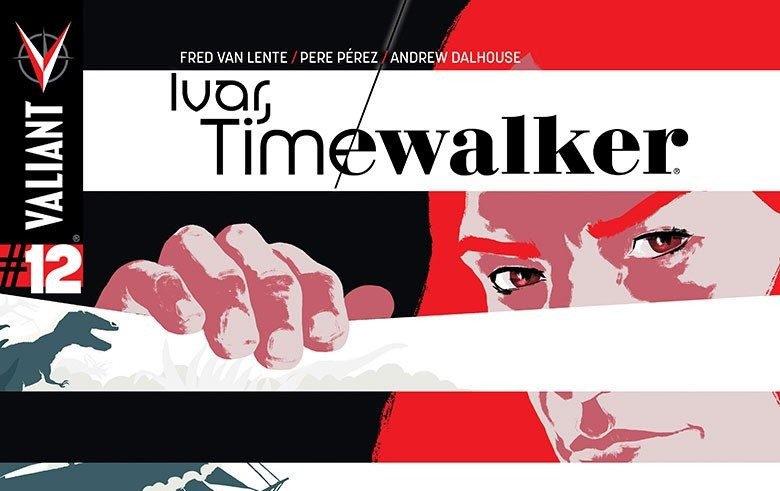 Valiant went big this week! IMPERIUM continues to build towards an exciting confrontation between Harada and LV-99, while WRATH OF THE ETERNAL WARRIOR maintains its position as my favorite Valiant comic with its touching story and beautiful art. Finally, IVAR, TIMEWALKER finishes its run in bittersweet style. The end of this year is pretty big for Valiant, and you couldn’t pick a better time to get into this publisher!

This issue of IMPERIUM is very much a “middle” issue. Harada’s continuing plan to take over and save the world, well, continues, as Harada prepares for his yearly big sleep to regain his powers. During this, of course, The Vine’s plan to take out Harada commences while LV-99 rips apart Mech Major.

READ: Vertigo is doing great stuff, too! Check out our review of LUCIFER #1!

This narrative is interspersed with Harada’s history with The Vine, which is fairly interesting. LV-99’s origin is discussed, and it’s an appropriately disgusting perversion of science, beautifully illustrated by Juan Jose Ryp. I often gush about that guy’s work, and it continues to impress here. He should be illustrating a horror comic or something. His hyper-detailed style would do well for horror or something like HEAVY METAL: body terror, space terror, etc. Still, I am very excited for his upcoming two-issue arc in WRATH OF THE ETERNAL WARRIOR. I’m interested to see his take on the intense, hellish world that Raul Allen has developed so well, even in just two issues. 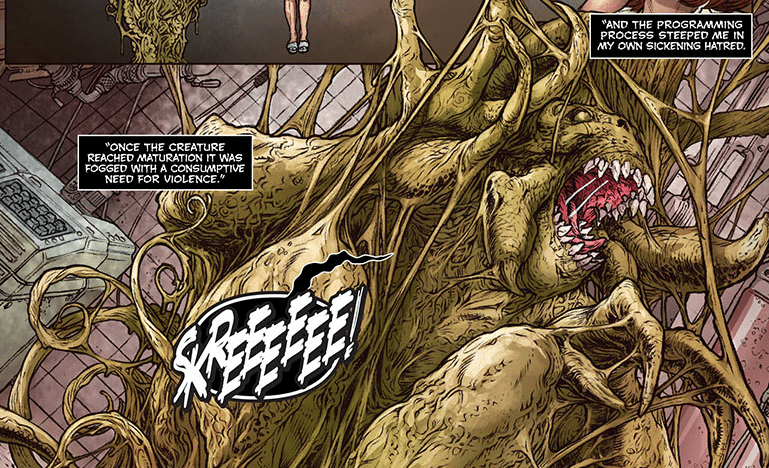 Cafu’s art, while continually solid, is outshined by Ryp. Cafu’s forte is action, and this issue seems to skirt by that to show the aftermath on more than one occasion.

IMPERIUM continues to introduce some interesting ideas, but this issue feels like an origin story in the wrong ways. After the incredible two-issue interlude with Divinity, I expected something a bit more engaging. The art is still outstanding, though, and I’m excited to see how this turns out in next month’s conclusion.

WRATH OF THE ETERNAL WARRIOR #2 by Robert Venditti, Raul Allen and Patricia Martin 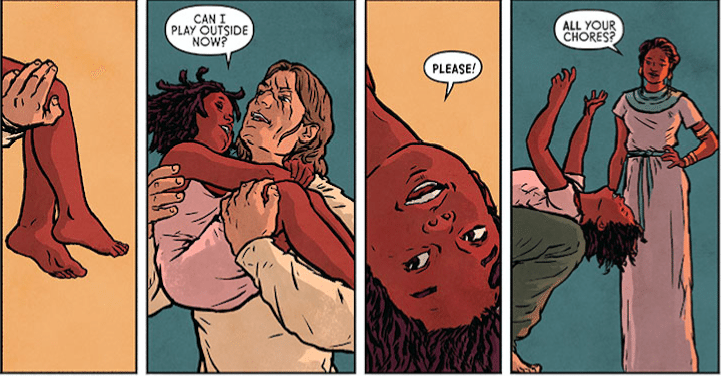 WRATH’s second issue delivers on all of the promises from the first and more. Split between the paradise granted him by the Geomancer Tama and what appears to be Hell itself, Gilad’s journey is stunningly illustrated and heartwrenching at once.

At the end of BOOK OF DEATH, the immortal Gilad finally died and found paradise with his wife and many children. However, the pressure of his duty to protect the Geomancers (and Earth) won’t allow him to rest, and this issue sees him leave the warmth of his family for a dark, red-hued, demon-filled nightmare as he journeys back to life.

READ: Brian Delpozo loves GOTHAM ACADEMY, and you should, too! Check out his love letter to this great series here!

Oh man, this art. I mean, have you looked at this comic? Where did Raul Allen and Patricia Martin learn how to do this with paper? The paneling is incredible. The emotions on Gilad and Leena’s faces as they separate from paradise is heartrending. The color palettes, shifting drastically between paradise and Hell, are stark and beautiful (and later, terrifying). The detail that Allen puts into his work is jaw-dropping, from devil designs to the landscapes that Gilad must cross. 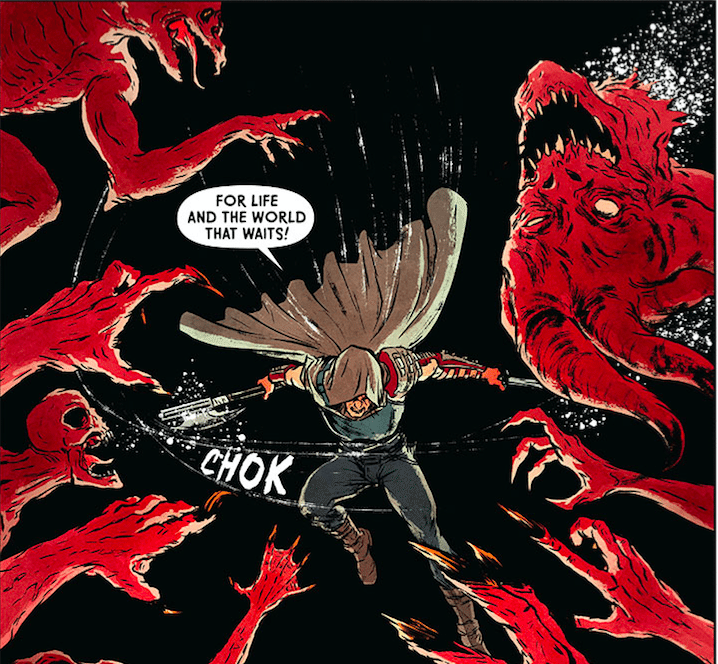 If you’re not buying this comic, you’re doing it wrong. Every month, get this comic. It’s one of my favorites. I’ve read it several times now just to look at the art, and I think that this is the best job Venditti’s done with Gilad’s character so far. The drive of someone who has had the same duty for 6,000 years is much different from most people, and this comic highlights why that may come to pass.

WRATH OF THE ETERNAL WARRIOR is Valiant’s best comic. Buy it, read it, tell a friend, and repeat that process a few times. Frame the art!

IVAR, TIMEWALKER, we hardly knew ye. Well, we did, but it’s still a shame to see this comic go. IVAR was a combination of the humor of ARCHER & ARMSTRONG with DOCTOR WHO and alternate universes thrown in for good measure. It was a strong comic that introduced a great character in Dr. Neela Sethi (who we will hopefully be seeing again) and built on Ivar and Neela’s tragic love story while giving the readers over-the-top sci-fi action and the kind of insane concepts only possible in comics. This issue, the series’ last, ties up most of the hanging threads, though I think it does so a bit hastily.

This issue is framed mostly around Ivar and Ank’s quest to save Neela (and the universe) after her apparent martyrdom in the last issue. I can’t say too much about the plot, because I don’t want to spoil this last issue, but it ties concepts from throughout the series together in a way befitting a time travel tale. Hint: Look at Ivar’s trenchcoat.

Pere Perez’s art is quite fitting as always. While he didn’t have the opportunities from the last issue’s alternate reality shenanigans, it’s not to say that Ivar’s time-spanning chase with dozens of alternate universe, evil versions of Neela isn’t thrilling.

READ: Check out our review of Marvel’s ALL-NEW HAWKEYE!

Man, that was hard to type. More congratulations to Van Lente for approaching heavy sci-fi concepts while keeping a good grasp on character. I thought that Neela and Ivar’s romance moved a bit quick, but the time-crossed lovers aspect comes together in the final pages. Ivar’s story is a tragic one—as are his brothers’, as evidenced by Gilad’s journey in WRATH OF THE ETERNAL WARRIOR—but at least this comic gave him a chance at some happiness before whatever comes next. And I do hope that something will come next for these characters. You can’t just let a character like Ank go to waste, Valiant!

Jeff Lemire’s BLOODSHOT REBORN #9 finishes its last arc before jumping into the future for “The Analog Man.” Meanwhile, further in the future, Matt Kindt and Clayton Crain continue their bold, gorgeous RAI with issue #12, and THE DEATH-DEFYING DOCTOR MIRAGE: SECOND LIVES #1 brings back the mystery to the Valiant Universe. Check out my interview with series writer Jen Van Meter here (and part 2 here)! 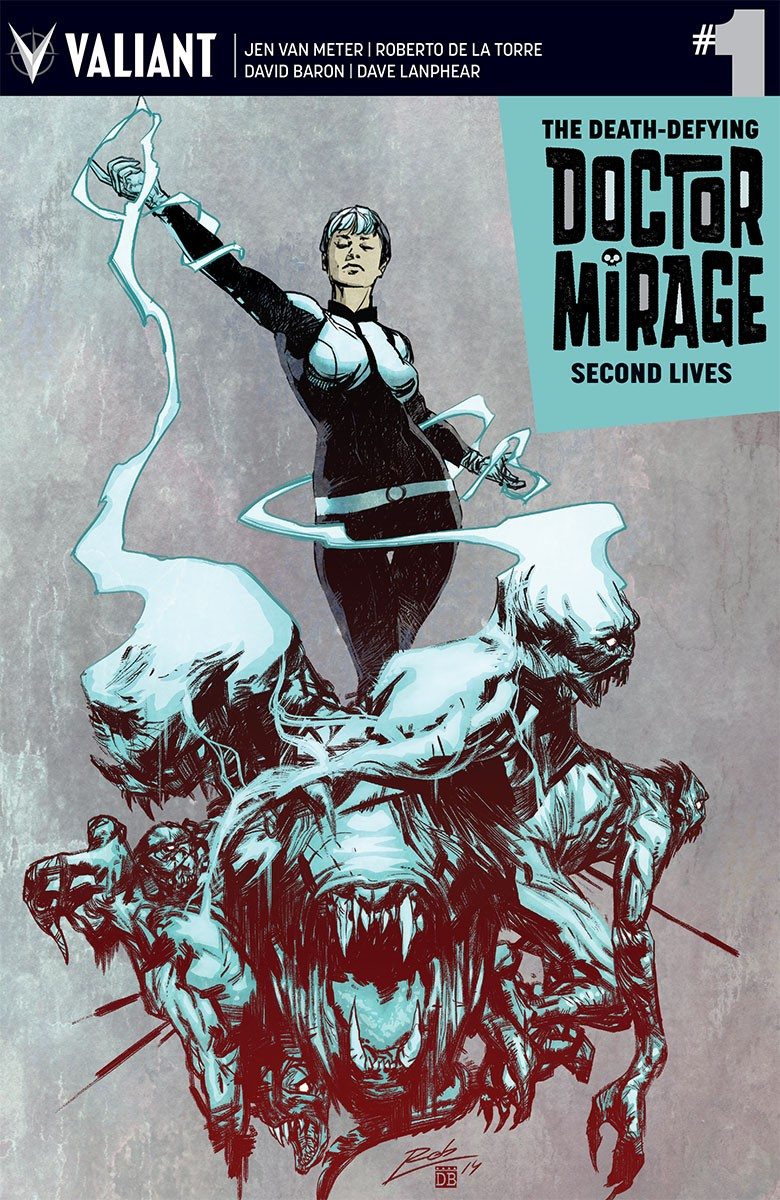