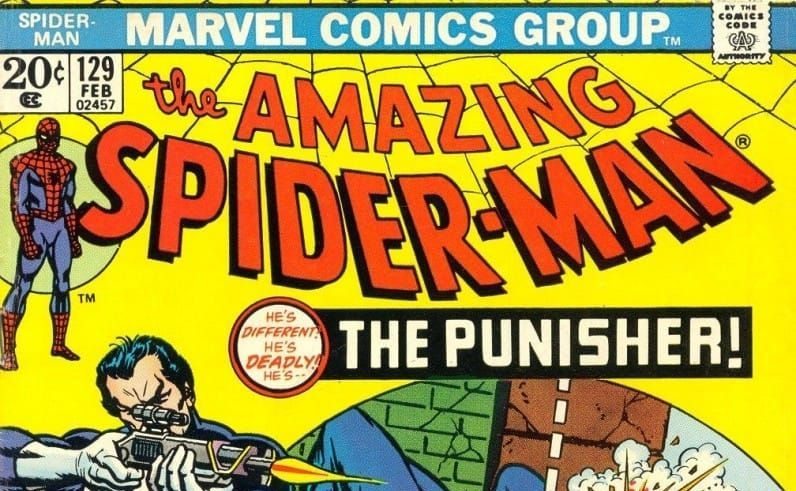 Last year, Netflix released a series called DAREDEVIL. It was nothing short of amazing, and if you haven’t seen it, stop reading this article and go binge watch every single episode right now. For those of you that have seen it, please feel free to continue because, today, we are going to look at the debut of the biggest addition to DAREDEVIL, the Punisher.

The Punisher debuted in the pages of THE AMAZING SPIDER-MAN #129 in February of 1974, written by Gerry Conway with artwork by Ross Andru. It would take years for the character to really gain any traction as a solo hero, though. The Punisher would spend the first twelve years after his creation appearing as foils to other Marvel heroes until 1986, with the release of a five-part miniseries.

The reason it took so long for the Punisher to become a prominent hero was that he didn’t fit the superhero culture of the 1970s. He was violent, he killed his enemies, and he wore nothing but black and white. He was the complete opposite of the heroes Marvel was producing at the time.

Once the tone of the comics industry changed in the 80s, led by such works as Alan Moore’s WATCHMEN and Frank Miller’s THE DARK KNIGHT RETURNS, the Punisher blew up in popularity. He became the perfect fit for the anti-heroes becoming popular in the 80s and 90s. He even headlined three separate comic books at the same time in the 90s. What’s really impressive is how many of the core aspects of the Punisher are already established in his very first appearance. 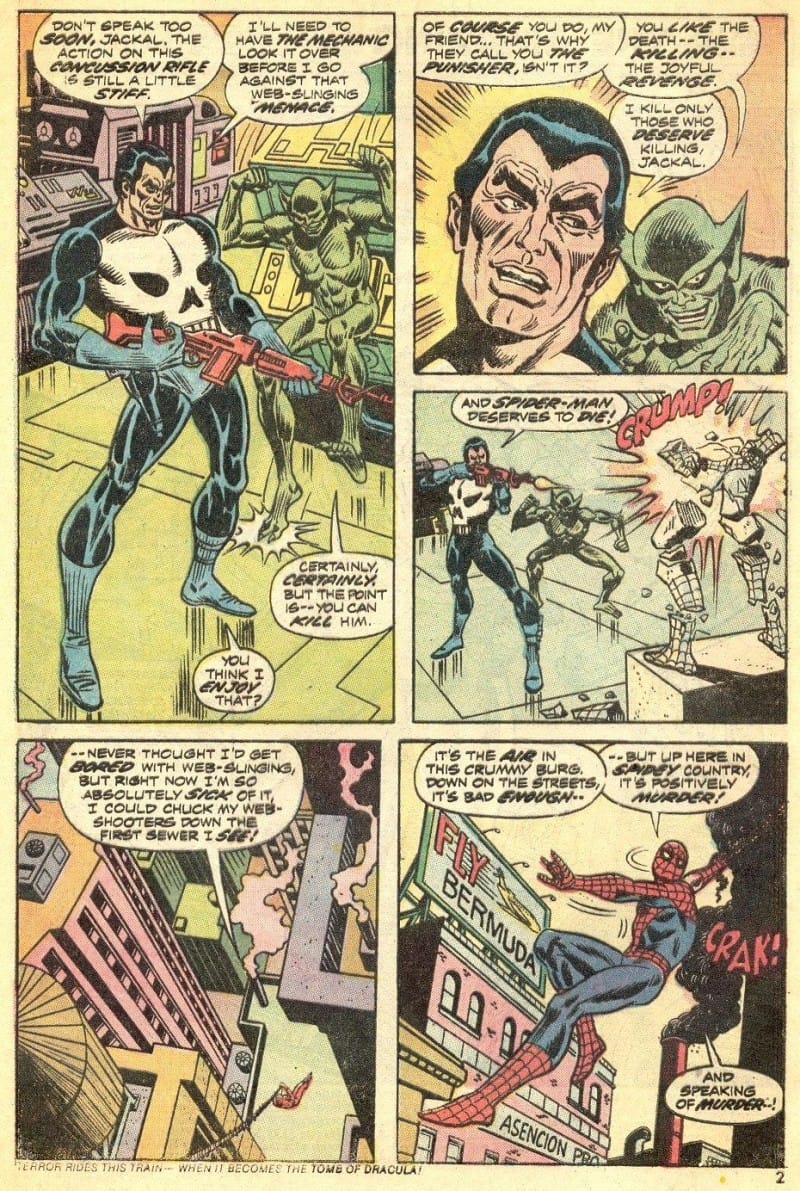 THE AMAZING SPIDER-MAN #129 is also the debut of the Jackal, who looks like a hairy, very naked version of the Green Goblin. He hires the Punisher to kill Spider-Man after the Punisher impresses him with his sweet statue-shooting skills. The Jackal tries to bond with the Punisher by trying to get him to admit how much he enjoys killing, but the Punisher only kills those who deserve it. And Spider-Man clearly deserves it. Why? Because the Punisher said so. But seriously, Spider-Man has recently been accused of murder, and that’s all the motivation the Punisher needs to go after someone.

READ: What will the Punisher’s role be in DAREDEVIL? Check out our analysis on what the announcement means for Marvel!

Back on the streets of Manhattan, Spider-Man is getting sick of web-slinging, because there hasn’t been enough crime lately to keep him occupied. Luckily, he finds a group of five random guys loading random things into a truck. It’s not really a criminal act, but Spidey swings in anyway. Luckily, they instantly begin shooting at him to show they’re actually bad guys and not just people doing their jobs. After he webs them up for the police, we get a good amount of brooding. It turns out all this moping is because the Daily Bugle accused him of killing Norman Osborn. He also gives an incredibly uncomfortable smile after changing out of his costume. I’ll just let you check it out for yourself.

Anyway, Peter Parker enters the Daily Bugle, and naturally, he gets chewed out by J. Jonah Jameson. Apparently, the Punisher has been murdering mobsters, and the Daily Bugle completely missed out on it. Now, it’s up to our heroic Spider-Man to take pictures of this psychopath, who clearly likes to kill things. Before Spider-Man can even figure out how to find the Punisher, a large concussion round from a sniper rifle almost kills him. Finally, we get some awesome Punisher-versus-Spider-Man action.

READ: If you’re wondering what the current Spider-Man is up to, check out our review of SPIDER-MAN #1!

Spider-Man tries to kick the Punisher, who dodges his attack with some sweet acrobatics. Spider-Man assumes he’s trying to run away, but this is the Punisher. He never runs. Instead, he pulls a gun out of a nearby chimney. It’s super badass. Instead of blowing Spider-Man away, though, the gun shoots out a titanium wire, trapping the web-slinger. To summarize: Punisher’s Plan A was to straight up murder Spider-Man with a sniper rifle, and Plan B was to trap him in the most humane way possible. The Punisher is a complicated man. 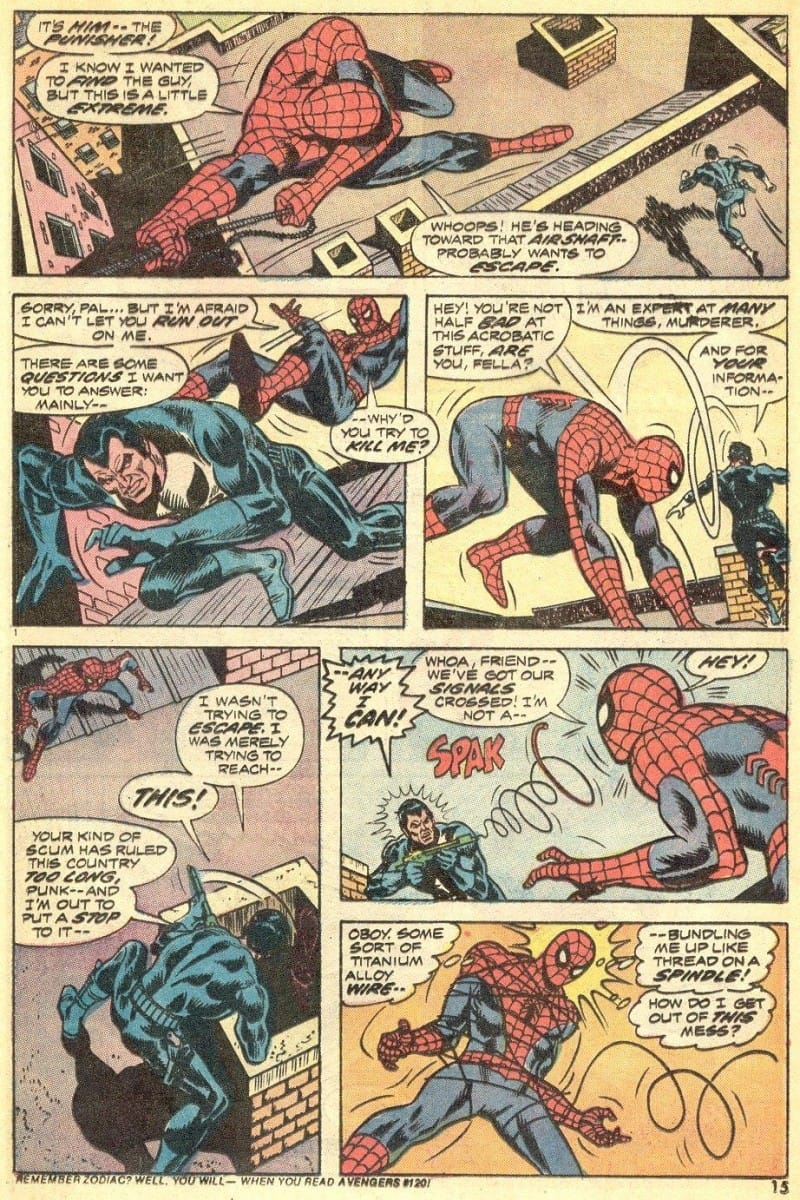 The Punisher then pulls out his pistol to murder Spider-Man for real this time, but Spider-Man breaks the titanium thread and punches the Punisher right in the mouth. While all this is happening, the Jackal is hiding in the same chimney that the Punisher pulled his gun out of. He is also still very naked. Spider-Man gets sucker-punched by the Jackal and falls off of the roof. After saving himself by swinging into a nearby building and, I quote, “extricat[ing him]self from the maw of female hysteria,” he heads back up and grabs the Punisher’s gun as evidence.

Elsewhere, there’s some backstory about Harry Osborn and Mary-Jane Watson, but this isn’t their story. This is about the Punisher and how awesome he is. For example, check out his super backhand slap (pictured below). 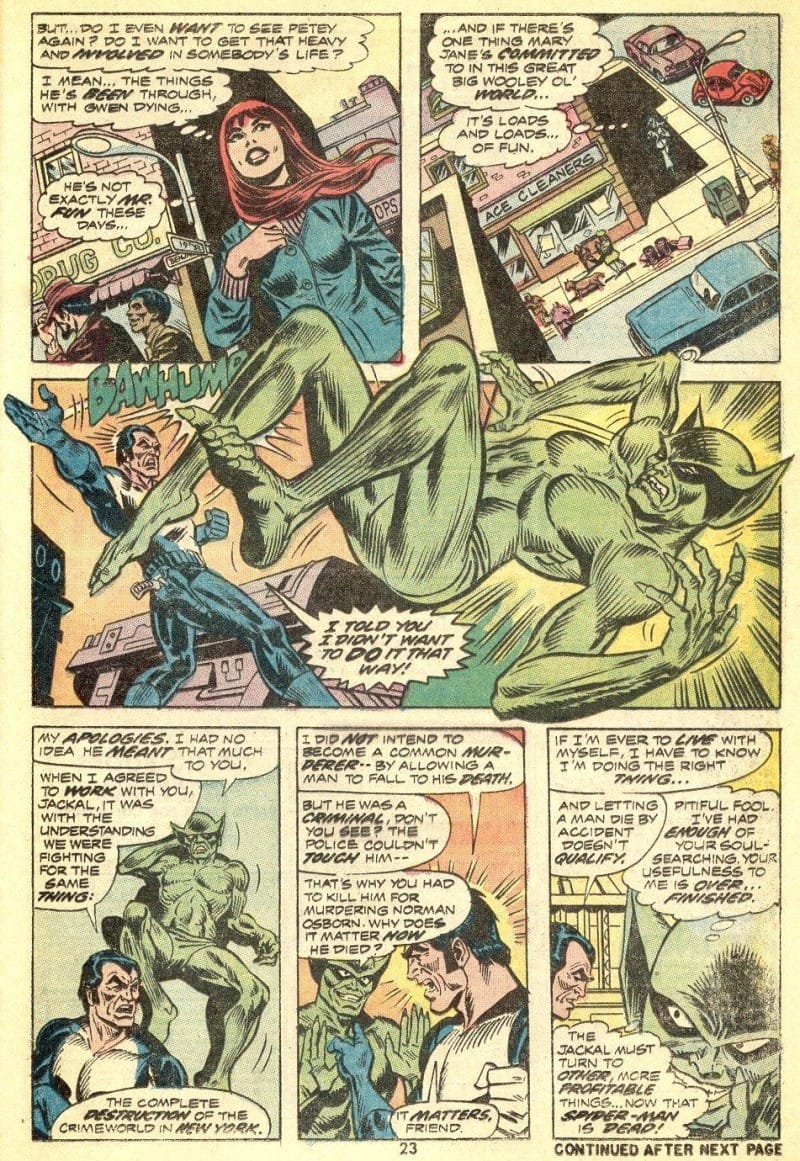 The Punisher lays out his values and how he only wants to clear out the crime in New York if it is on just and righteous terms. It’s really interesting to see how the key pieces of the Punisher’s philosophy are there from day one. The fact that he kills based on a strict code of justice allowed the character to grow into the anti-hero he would become rather than limit his role to a man who wears black and shoots people. Clearly, there was intent from the beginning to make the Punisher a hero.

After attempting to put the Jackal in his place through the power of his backhand, the Punisher goes to a man named the Mechanic, the person who makes his weapons. Right before he enters the Mechanic’s building, though, Spider-Man swings in front of him. The Punisher decides to wait patiently for Spider-Man to enter the building. Why? Because the Punisher only does something if he can do it in the most awesome way possible. He crashes through the window and superkicks Spider-Man directly in the face. 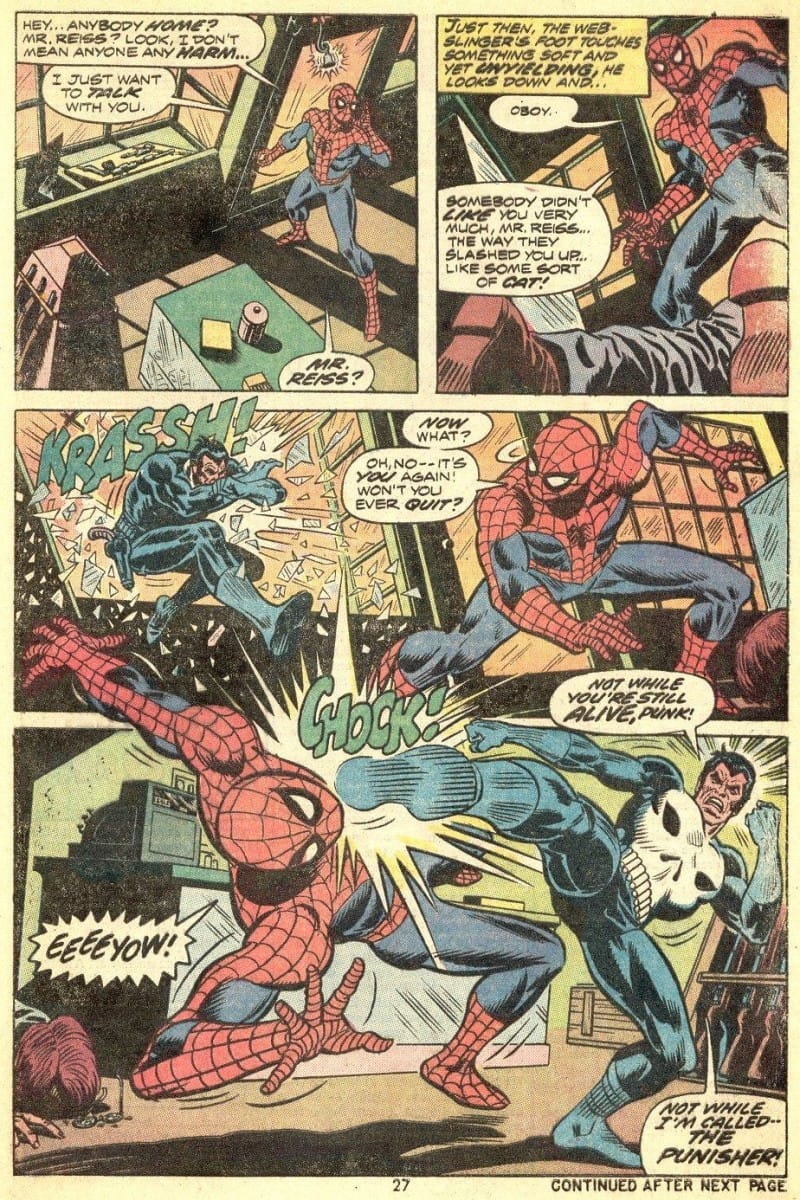 Oh, there’s also a dead body on the floor. After some back and forth fighting, the two realize it was the Jackal who committed the murder. The Punisher punches a wall and walks away, mumbling about how he is fighting a lonely war. It’s this type of dark brooding that makes it easy to see why the Punisher didn’t fit in after his initial debut, especially juxtaposed against Spider-Man’s bright colors and constant quips.

And with that, we have the debut of the Punisher. A simple man with a gun who wants to kill criminals and Spider-Man. Man, he is so cool.  We’ll see how true to the comics the character is portrayed in season two of Netflix’s DAREDEVIL!