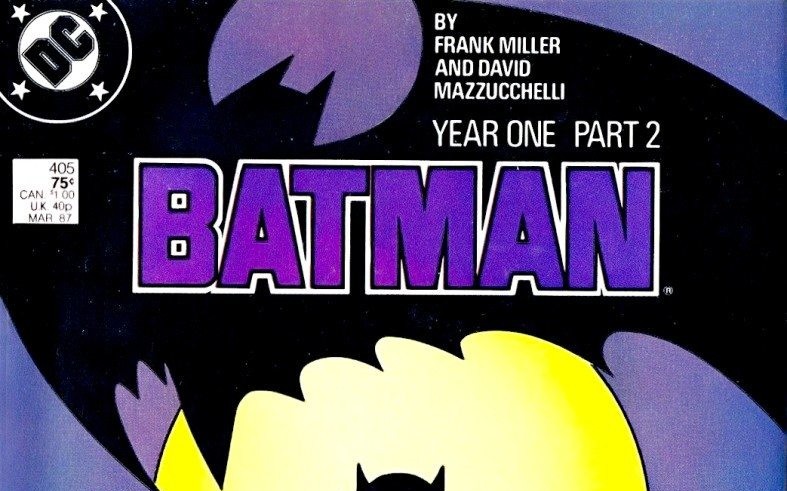 Normally, This Week in Comic Book History looks at older comic book interpretations of some of our favorite characters and pokes fun at the more bizarre and silly parts of those stories. That won’t be happening this week. This week will be spent gushing over the phenomenal BATMAN #405. You may know it better as the second chapter in Frank Miller and David Mazzucchelli’s classic story, BATMAN: YEAR ONE. Also, it may just have my favorite Batman page of all time, but trust me, we’ll get to that. First, a bit of history on the series.

LISTEN: Want another take on BATMAN: YEAR ONE? Check out our podcast on Street Level Characters!

BATMAN #405 was released in March of 1987. As a part of BATMAN: YEAR ONE, the story redefined Batman’s origin for the modern age. The story gave it a more grounded and violent look. It is the basis for the character that we still see this to this day. The world of Gotham itself changed when BATMAN: YEAR ONE was created. No longer could villains commit crimes simply because they liked to trick people with riddles and Batman was a good foil. Instead, every character had to adapt to fit a more real-world approach. For example, characters like Mister Freeze would get a much darker and more personal origin in formats like BATMAN: THE ANIMATED SERIES in the early 90s. A villain with a simple freeze ray was no longer enough. Characters were forced to change. This was not the only example either. Every rogue in the Batman gallery was forced to become more grounded and real or risk being left behind in more campy times. 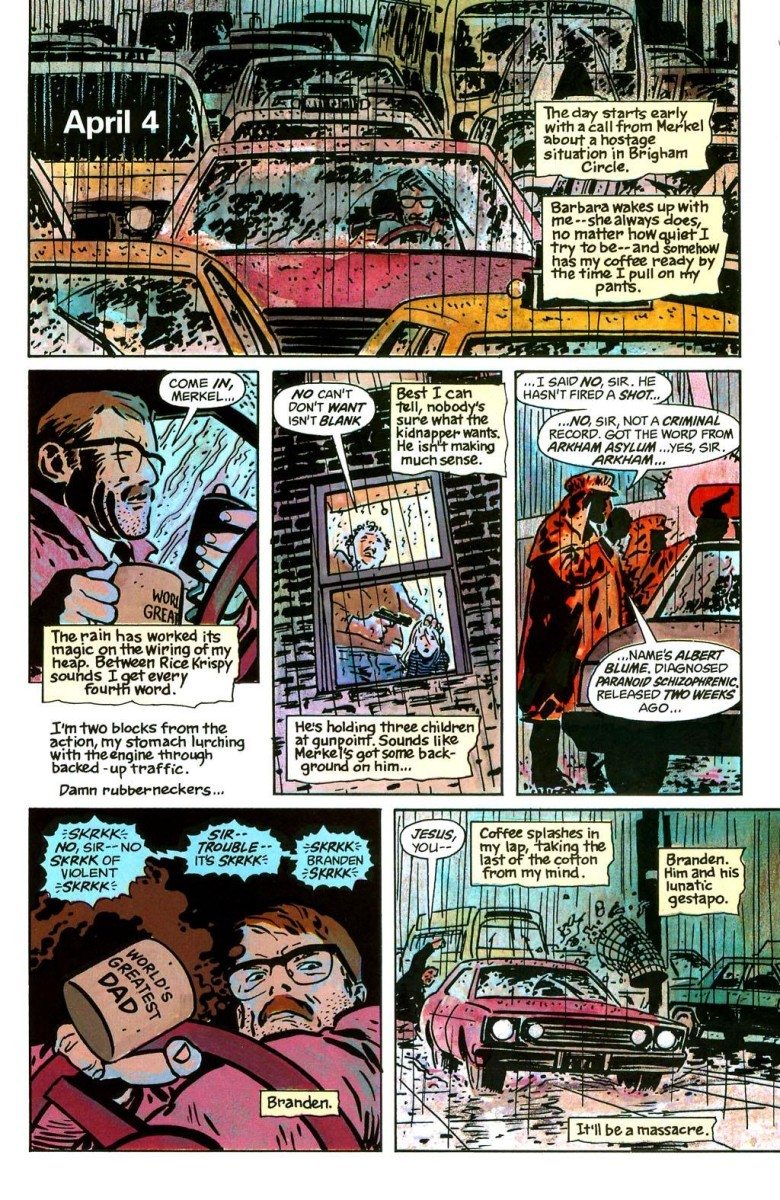 What is also really interesting about the series is that the story is as much an origin for Jim Gordon as it is for Bruce Wayne. In BATMAN #405, Jim Gordon actually gets far more time on the pages than Batman does. His transition from a transfer cop from Chicago to the leading force in taking down corruption in the Gotham City Police Department is just as crucial to the story as Bruce deciding he will strike fear into the heart of Gotham’s criminals by becoming a bat. There will be plenty of gushing about how well the story works later, though. Now, let’s get into BATMAN #405.

READ: If this Batman analysis isn’t enough for you, check out our look at Batman and the asexual nature of his character!

The story opens with Jim Gordon driving through the rain, because it’s Gotham and it’s either night time or raining. He just received a call about a paranoid schizophrenic man holding three children hostage at gunpoint. Also mentioned in the call is a report that a man named Branden, who works in the Gotham City Police Department, is being called in to handle the situation. This freaks out Gordon because, a month before, Branden murdered a group of rioters when he was brought in to break it up. I want to make a joke here about the situations, but a mentally unstable person is about to murder children, and if HE doesn’t, the swat team led by Branden will. I’m not working with a lot of good material here. I’m just worrying about the children. 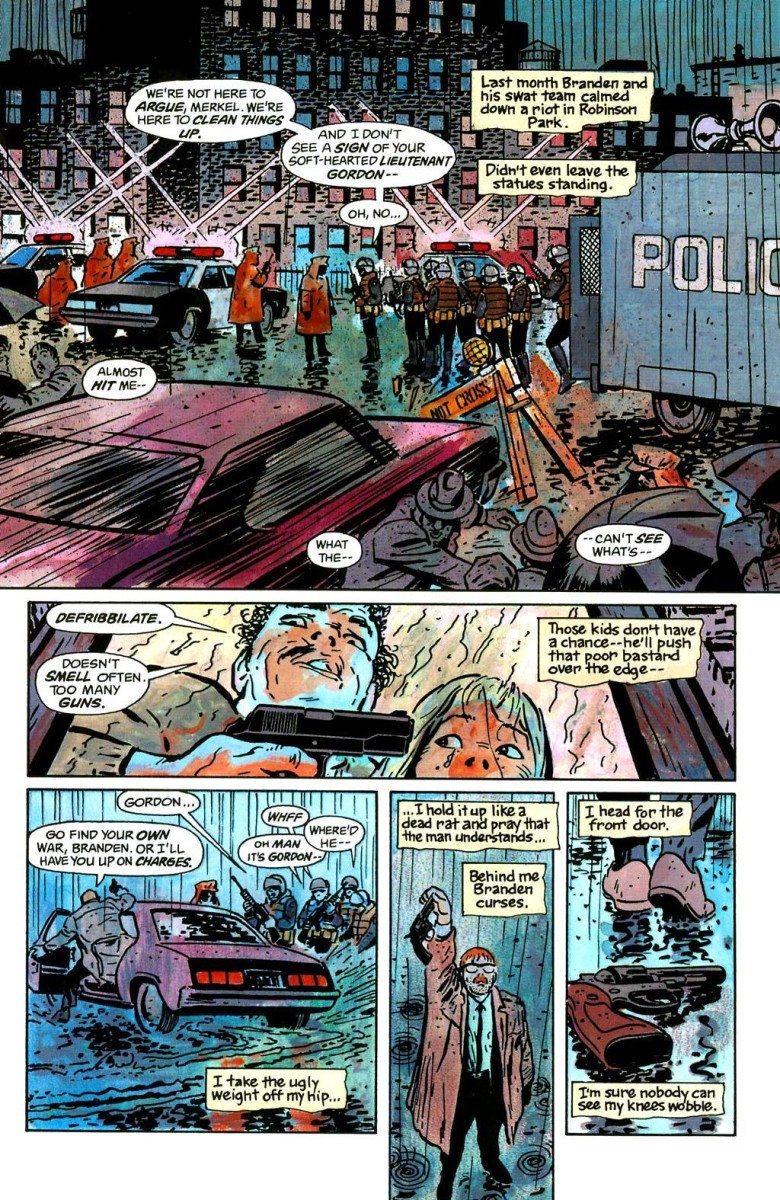 Luckily, Jim Gordon is a badass and drives directly in front of the swat team, pulls out his gun so the man holding the children hostage can see it, and walks directly in the front door. Jim Gordon is actually far more badass than Batman ever is in YEAR ONE. Don’t believe me? Check out BATMAN #404 where Jim Gordon beats a dirty cop with a bat and leaves him naked in the rain while Batman gets shot and bleeds everywhere. Seriously, Jim Gordon rules. Jim Gordon then enters the room of the man holding them hostage, disarms him, and knock him out in one punch. So. Bad. Ass.

READ: This isn’t the last time Batman would declare he shall be a bat. Check out our review of BATMAN #49!

A few days later, we get a few quick cuts of Barbara Gordon, who is very pregnant with James Gordon Jr., and of Branden talking to Commissioner Loeb about getting Jim thrown off the force. Finally, after all of that excitement, we get to Batman, although, this isn’t the Batman we’re all used to. This Batman kind of sucks at being Batman. He jumps down on a fire escape to stop three guys stealing things from an apartment. This causes one of them to fall over the edge and almost die. Batman catches him, but fails to account for the fact one of the other thieves is apparently a ninja. While he holds one guy twenty stories in the air, another repeatedly kicks him in the head while the other bashes him with a stolen TV. It’s not a good look. 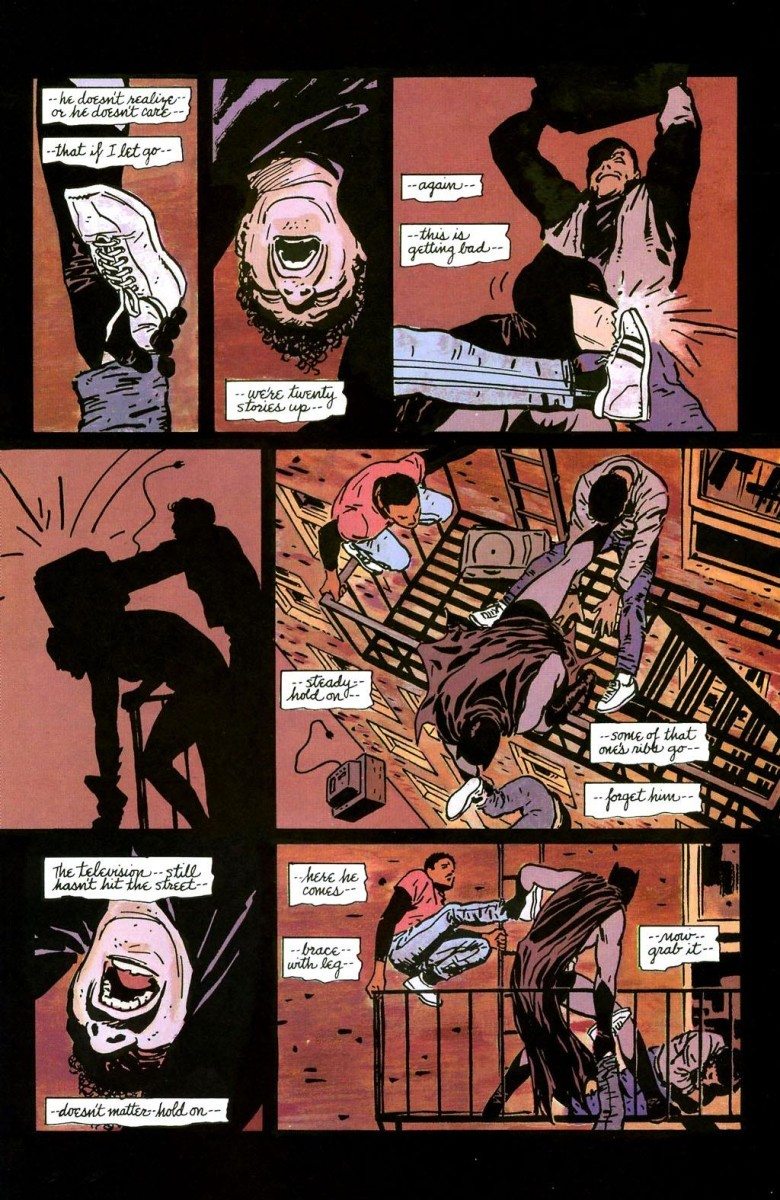 He eventually gets better, though, I promise. We then cut to the police precinct for a short bit where the cops discuss who this Batman character is. Frank Miller really packs a lot of story in two quick pages. Not only do we get a story from detective Flass, the corrupt cop from issue #404 that Gordon beat with a bat, about how he ran into a bat monster while “busting”(aka working on) some drug deals, there’s also a coy nod to detective Essen, who Gordon eventually falls for, and some hilarious sketches of what people think Batman looks like.

Elsewhere, Batman starts acting like Batman. Commissioner Loeb is having a nice meal with the Falcone crime family when my favorite Batman page of all time happens (see below). 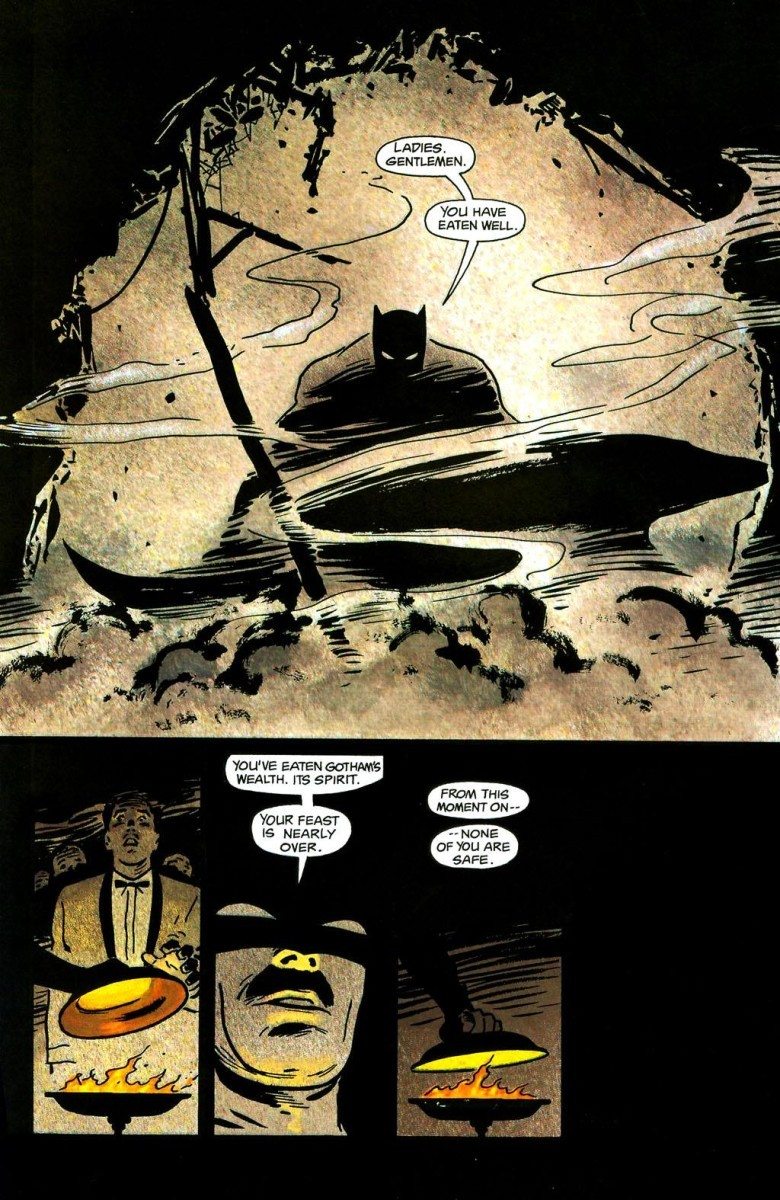 YES! Frank Miller does more to establish Batman using the element of fear against his enemies in five panel than anyone else ever has. Batman establishes an entire new status quo for the city of Gotham in 26 simple words. It is from this point forward that crime will never again freely reign in Gotham. Batman now rules Gotham, and anyone who tries to go against the law is no longer safe. It is powerful, and the issue isn’t even over yet!

Next, we get introduced to a young Harvey Dent as Gordon questions him to see if he’s Batman. There’s also some alone time with Gordon and detective Essen as their affair grows. During Gordon and Essen’s car ride, a white delivery truck flies in front of them with Batman on the roof, because why wouldn’t he be? The truck is out of control and almost runs over a homeless woman that Batman saves. Essen puts Batman at gunpoint as backup arrives. Finally, Batman seems to have his stuff together and disarms Essen before just completely deciding to say screw it and run away. This strategy proves foolish because he’s not faster than a speeding bullet. One actually goes into his leg. As a last resort, he dives through the window of an abandoned building. Branden then comes and decides to start blowing up the building with his helicopter! HOW ARE YOU NOT READING BATMAN: YEAR ONE RIGHT NOW!? IT”S SO GOOD! BATMAN #405 is over. Go read the rest right now!