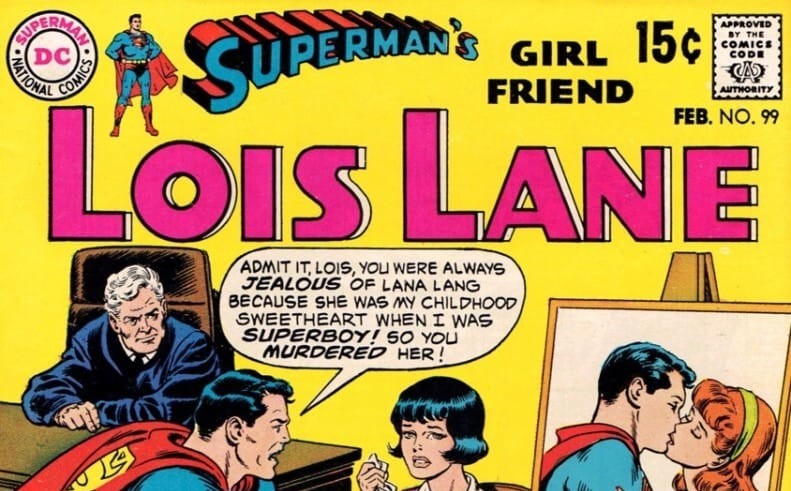 Valentine’s Day just happened, and love is in the air. People are going out on dates. Some may go to dinner, others may go to a movie, and that’s all very romantic, but nothing says I love you like accusing your girlfriend of murder. That’s exactly what Superman does in SUPERMAN’S GIRLFRIEND LOIS LANE #99, and if that doesn’t prove why this is one of the most enduring relationships in comics, then I don’t know what will.

READ: If you want to learn more about how Superman became the kind of guy who accuses his girlfriend of murder, check out our review of SUPERMAN: SECRET IDENTITY!

The relationship between Lois Lane and Clark Kent has been a huge part of Superman’s character since he was first introduced. ACTION COMICS #1 was not only the birth of Superman, but also the first appearance of Lois Lane. In the issue, Clark is already romantically interested in Lois and even asks her on a date. She then gets kidnapped and is eventually rescued- the normal Superman stuff. In Lois Lane’s own series, though, things between them get really, really, strange. SUPERMAN’S GIRLFRIEND LOIS LANE was the first solo series for Lois Lane based on her popularity in the Superman titles, but the Lois Lane and Superman in these comics are not quite the same ones we know today. With the Comics Code Authority in full swing by the time the series was released in 1958, characters had to follow very strict guidelines. So, Lois went from a no-nonsense reporter to a person who spends most of her time either trying to prove Superman’s identity, trying to marry Superman, transforming into random creatures (like when she turned into a centaur in issue #92), or gaining superpowers. It was a very different time in comics.

SUPERMAN’S GIRLFRIEND LOIS LANE #99 continues this fine tradition of the bizarre. Released in February of 1970, the story touches on something I’m sure we can all relate to: accusing our significant other of killing our ex and making our best friend (Batman in this scenario) try to prove their innocence. 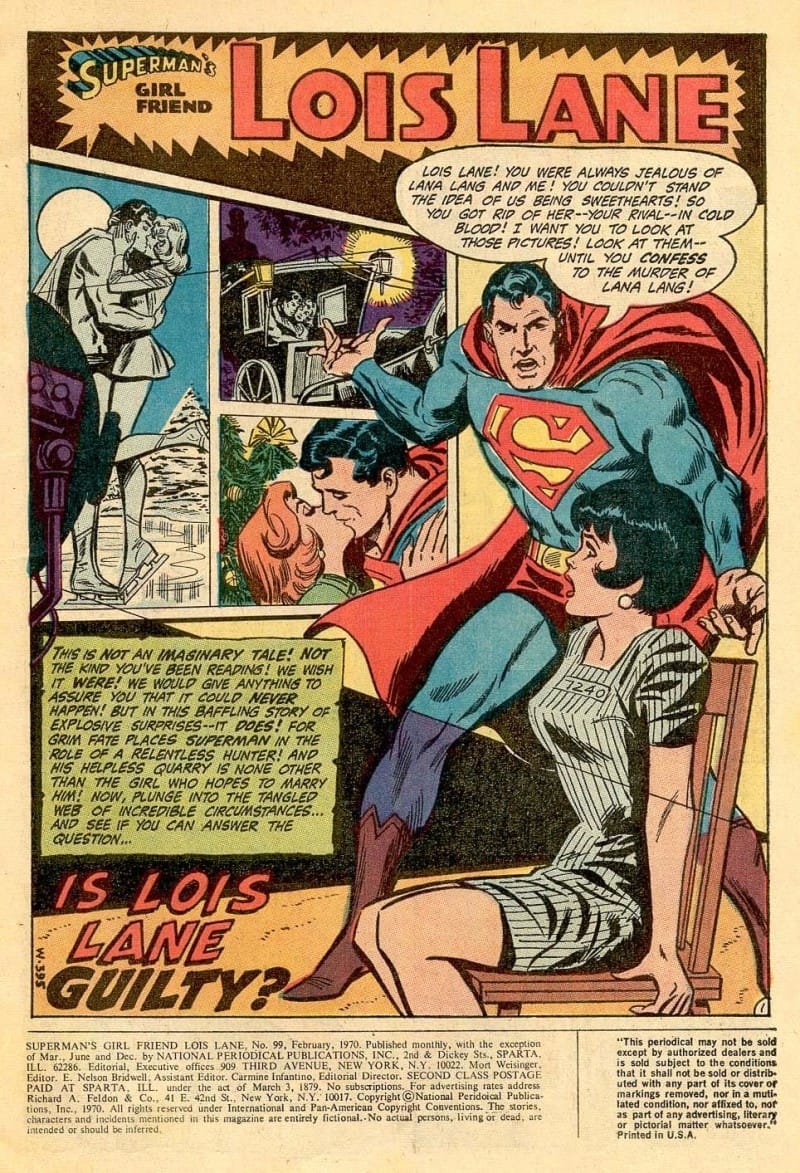 Sometimes it’s hard to remember that the relationship between Lois Lane and Superman is one of the most enduring relationships in comics (or it was before the New 52 tried to make us forget it ever happened), especially when the first page has Superman literally forcing Lois to look at pictures of him kissing his ex until she confesses. It feels a bit like torture, because it is torture. The story cuts back to earlier when Lois Lane is on her way to celebrate National Superman Day. She arrives at a television station, only to find Lana Lang there. Apparently, the show had already started and the studio audience finds this hilarious. It seems the studio planned to harass both women by showing them pictures of each other happily with Superman. Television worked differently in the 70s, I suppose.

The story cuts back to earlier when Lois Lane is on her way to celebrate National Superman Day. She arrives at a television station, only to find Lana Lang there. Apparently, the show had already started and the studio audience finds this hilarious. It seems the studio planned to harass both women by showing them pictures of each other happily with Superman. Television worked differently in the 70s, I suppose.

READ: Lois and Clark have a new series. Does anyone get accused of murder? Read our review of SUPERMAN: LOIS AND CLARK #1!

After the psychological torture of forcing both woman to look at pictures of Superman kissing them ends, the show’s host sends them to the back to argue about who Superman loves more, while he polls the audience on the same question. Lana accuses Lois of forcing kisses on Superman, Lois accuses Lana of showing her fake pictures, a fight ensues – normal reality television things, except this all happened backstage, and none of it was caught on camera. I guess they hadn’t mastered the reality TV genre in the 70s. 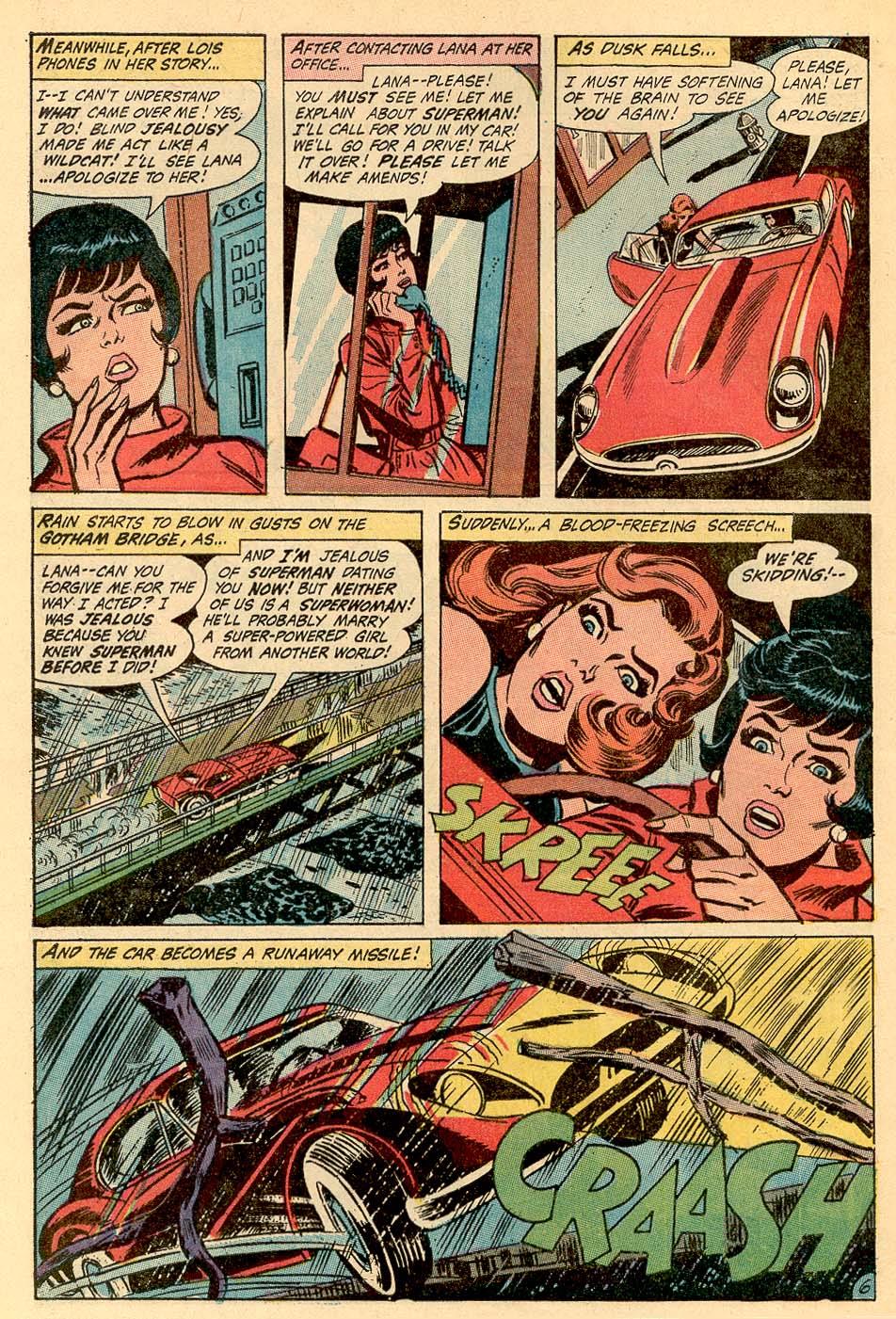 Lois tries to be the bigger person and invites Lana on a car ride with her to apologize. Unfortunately, it starts to rain, and Lois, for some reason, loses control and drives them both off the side of the bridge. Being that women are portrayed terribly here, it’s not surprising that the stereotype of them not being able to drive would be used. Their lives both already completely revolve around a man, so why wouldn’t the creators also assume they couldn’t drive in a little rain? Lois is able to get out of the car and swim to the surface, but Lana is nowhere to be seen. This doesn’t really seem to bother Lois that much. She hops in a stranger’s car and goes back to her hotel, until Superman shows up and swoops her away.

Superman pulls the wreck out of the river, and Lana is still sitting in the passenger seat, half hanging out of the open window. This, of course, brings up the question of why she didn’t just swim out of the open window, but trying to find a lot of logic in old DC Comics can be a fruitless endeavor at times. Lois is quickly thrown in prison. Luckily, she’s friends with Bruce Wayne, who promises to bring the best lawyer in the country to defend her. The best lawyer in the country turns out to be Batman, because of course it’s Batman. Who else would it be? 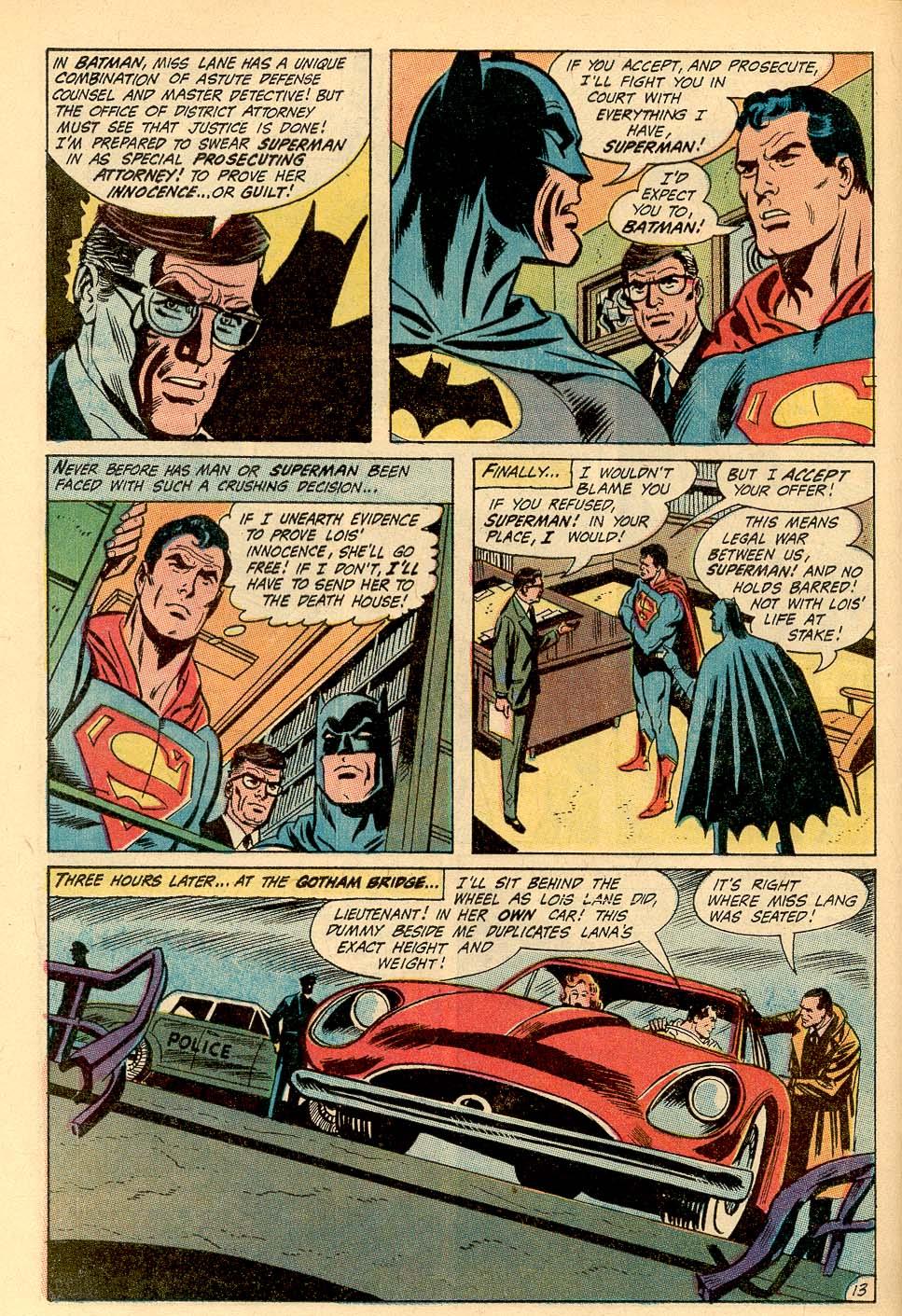 This leads to Batman and Superman fighting one of their least talked about battles, a legal battle in the courtroom. I should have put a spoiler warning because I’m pretty sure this story is the real inspiration for BATMAN V SUPERMAN: DAWN OF JUSTICE. If it isn’t, it should be. Superman decides the best way to prove if Lois is guilty is to drive her car off the bridge again and see if he can save the dummy sitting in the passenger seat. Of course, he saves the dummy because Superman saves things. It’s kind of his thing. This proves Lois could have saved Lana. Which doesn’t really make her a murderer, just someone who isn’t a hero. Maybe they had a different definition of murder in the 70s too?

The issue ends on a cliffhanger. The trial is just beginning, and Batman is completely stumped on how to prove Lois’ innocence, probably because he hasn’t done any actual detective work. Does Batman prove Lois’ innocence in SUPERMAN’S GIRLFRIEND LOIS LANE #100!? I’ll spoil it for you, yes. We’ll save the details of that issue for another article, because it is its own pile of crazy that we just don’t have time for.

With that, we have one of the least romantic moments in one of the longest-lasting relationships in comics. I hope your Valentine’s Day didn’t end up with murder charges. If it didn’t, you’re in a relationship with someone better than Superman. That’s something to be proud of.