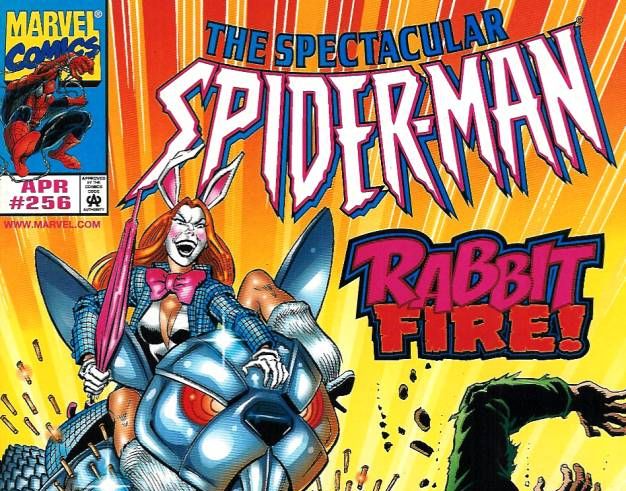 Welcome back to This Week in Comic Book History! ComicVerse’s weekly series where we look at comics that came out this week, around this week, or really just fits the theme I want. This week is the latter because we’re going to take a look at one of Spider-Man’s greatest rabbit themed foes in honor of Easter weekend, the White Rabbit. Also, this may be Spider-Man’s only rabbit themed villain, but hey, first place is first place no matter how you earn it as far as I’m concerned. THE SPECTACULAR SPIDER-MAN #256 came out in April of 1998 and not only is it a lot of completely over the top fun but it’s also a great take on a Superhero’s day when he has to fight on of his D-list villains. Let’s dive in shall we?

READ: This week in Comic Book History analyzed Spider-Man before when he fought Punisher in THE AMAZING SPIDER-MAN #129!

The first thing about this comic that’s so great is that writer Joe DeMatteis knows that he’s created a terrible villain and isn’t shy about letting you know how awful the White Rabbit is at being a super villain. Every hero needs a villain like the White Rabbit who isn’t really a challenge to defeat, but still continually tries to earn respect in the super villain community. She continues the fine tradition of awful Spider-Man villains like the Big Wheel and the Kangaroo. One of those guys rides around in a giant wheel and the other is an Australian who can jump really high. I’ll let you guess which one is which.

These kind of villains, though ineffective and at times silly, are actually very important. In a strange way it almost helps ground the Superhero they are fighting in reality. Believing that these god-like beings can be challenged by every single criminal they come across is a bit absurd. Not every person who is good with robotics is going to be Doc Ock. Some of these people are just going to be Dave down the street who knows how to fix cars and decided to rob a bank with his Mustang. That’s who the White Rabbit represents. She represents the Dave down the street in all of us. 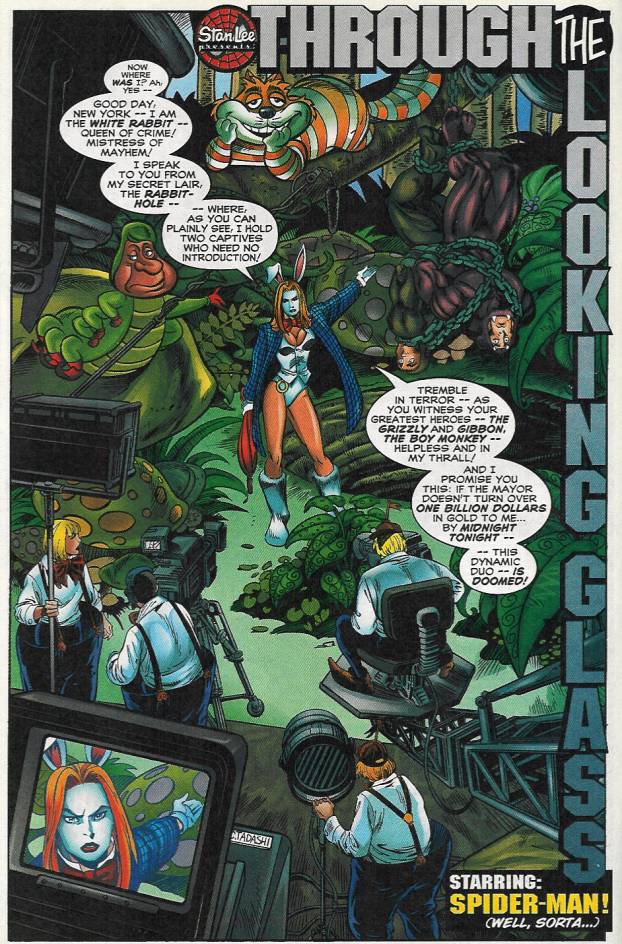 The story starts off simply enough. A soap opera is on TV when it is hijacked by the White Rabbit. There are a few things that really stand out about this scene. The first being her lair, the Rabbit Hole, has two insanely muscular men dressed like furries named Grizzly and Gibbon the Boy Monkey chained upside over a pit of rabid bunnies… We’ll come back to them.

READ: Looking for some current Spider-Man tales? Checkout our review of AMAZING SPIDER-MAN #9!

The second thing is the fact that she has a full film crew. This caused me to ask where she got all of this money? That was a foolish question, and one I honestly wish I never asked. It turns out that she had sex with her eighty year old billionaire husband until he died, and then she claimed all his money. As far as super villain origins go, elderly sex murder is pretty damn evil. 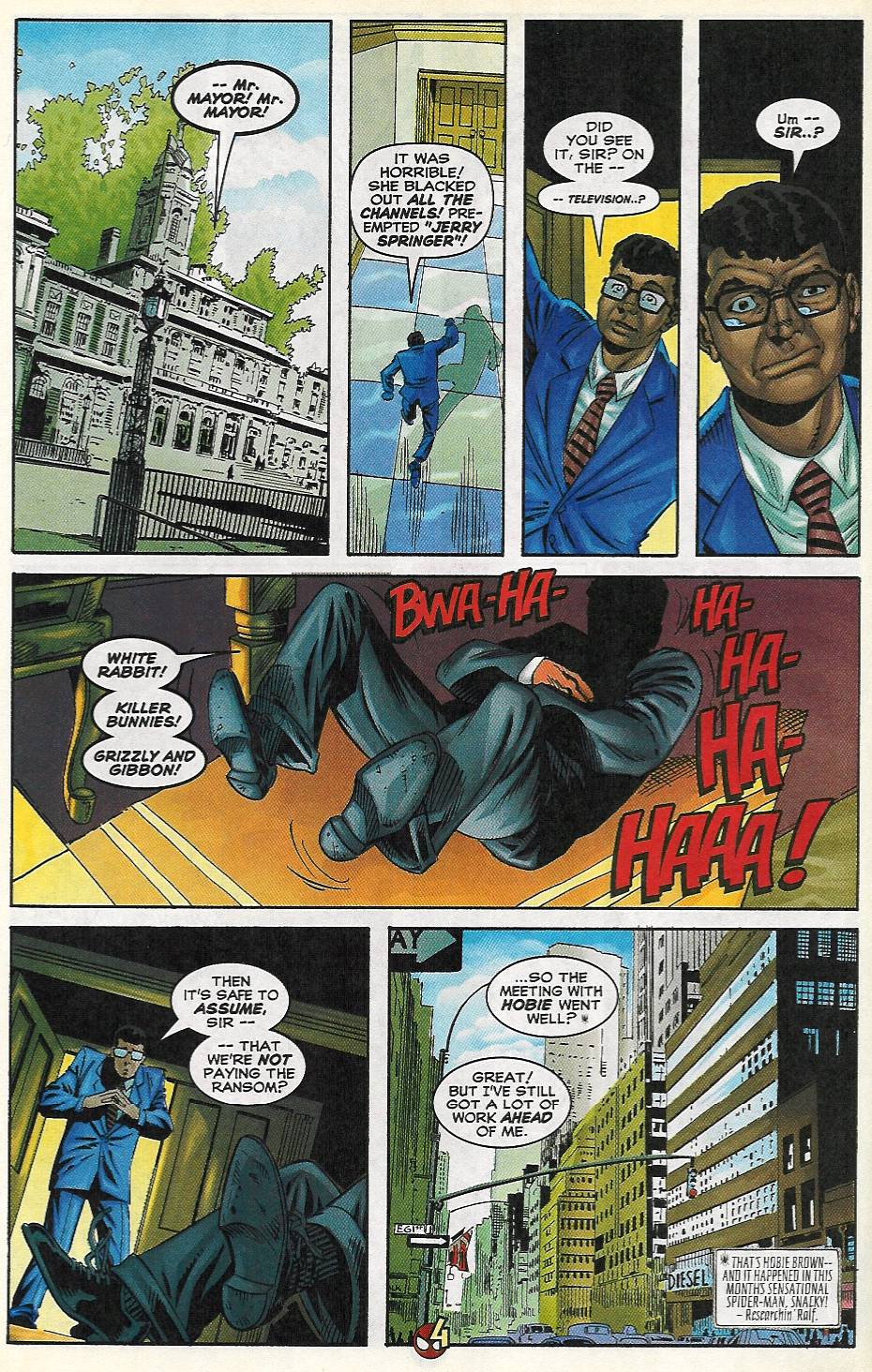 In the next scene we get the president laughing so hard at White Rabbit’s billion dollar ransom request that he has fallen on the floor. His counters her ransom with $2.50, and White Rabbit is furious. Grizzly and Gibbon are actually cool with their lives being worth $1.25 each. The seem to know understand their role. It’s also a great little scene that shows how hard it is to break into the villain industry. I know Scarface said, “In this country, you gotta make the money first,” but White Rabbit forgot the part where you need to have respect to get that money. She definitely skipped step one. Anyone who has ever tried to break into an industry can definitely relate.

In actual Spider-Man news, we learn that he can no longer wear his Spidey costume because the entire world hates him so much they’re willing to kill him on site. At least, I think that’s why. Other than that I can’t see a legitimate reason for him to not be able to wear it. Luckily, Mary-Jane is a supportive wife (wasn’t it awesome when Spider-Man was happily married? Good times.) and is helping him by designing a new costume. Also, Norman Osborne is blackmailing J. Jonah Jameson into releasing his memoirs, but that doesn’t resolve at the end of the issue, so we’re ignoring it. 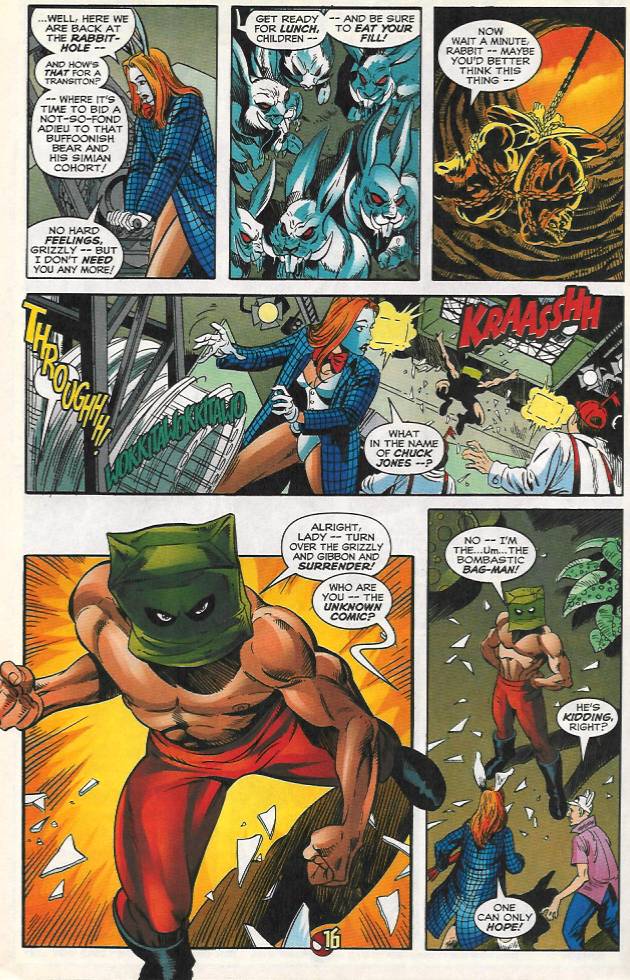 Back at the Rabbit Hole, White Rabbit has had enough of this nonsense and raises her ransom to five million dollars! Clearly math isn’t her strength. It’s a funny moment, but it almost makes White Rabbit too cartoonishly dumb. Although, scenes like this really demonstrate how important villains like the White Rabbit are. The world of Superheros should be dumb and silly sometimes. Between all the violence and death it’s easy to forget this, but every now and then there needs to be a reminder of the kind of world we’re reading about. A world of spandex and dream powers is an outlandish place. And with that, a bit of absurdity is required to make it work. Before White Rabbit actually asks for that money, she decides to murder Grizzly and Gibbon anyway by feeding them to her rabid rabbits because…murder’s fun? It’s a great bit of over the top villainy that really shows how hard White Rabbit is working to be respected.

READ: Peter Parker’s not the only Spider-Man in town! Check out our review of SPIDER-MAN #1 to find out more!

But, more importantly than that, is the Bombastic Bag-Man coming to save the day. Not only is it a great nod to Marvel’s, and more specifically Stan Lee’s, love of using alliteration when naming their characters, it’s also a lot of fun. It’s literally just Peter Parker in red sweat pants with a paper bag over his head. It takes a bit of suspended disbelief when watching him flip around and never having the bag on his face move, but it’s great seeing a character evolve, even for a singular issue, and take some enjoyment in the fact that he can do whatever he wants with his superhero uniform. 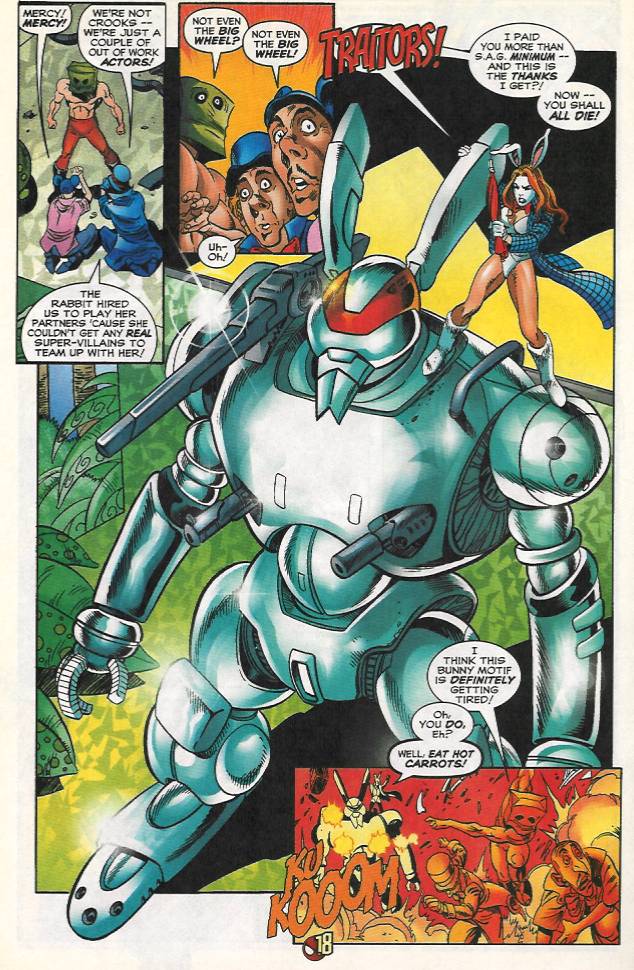 White Rabbit’s henchmen are quickly subdued. This causes White Rabbit to just say screw it and bring out the big guns. In this case, the big gun is a giant rabbit robot that shoots carrot missiles. I love her dedication to the rabbit theme.

Although, as awesome as the rabbit robot is in theory, it’s far less effective in practice. Grizzly and Gibbon use their disgustingly large muscles and throw the entire thing into a wall where it explodes. It’s a fitting end for White Rabbit who tried so hard but failed miraculously every step of the way. In the final moments of the story we return to Peter and Mary-Jane as she introduces him to his new Prodigy costume which is just yellow spandex filled with fake muscles that she covered with steel armor in places that don’t protect any of his vital organs. His shoulders, shins, crotch, and forearms are in no danger of pain though. That’s what’s really important. 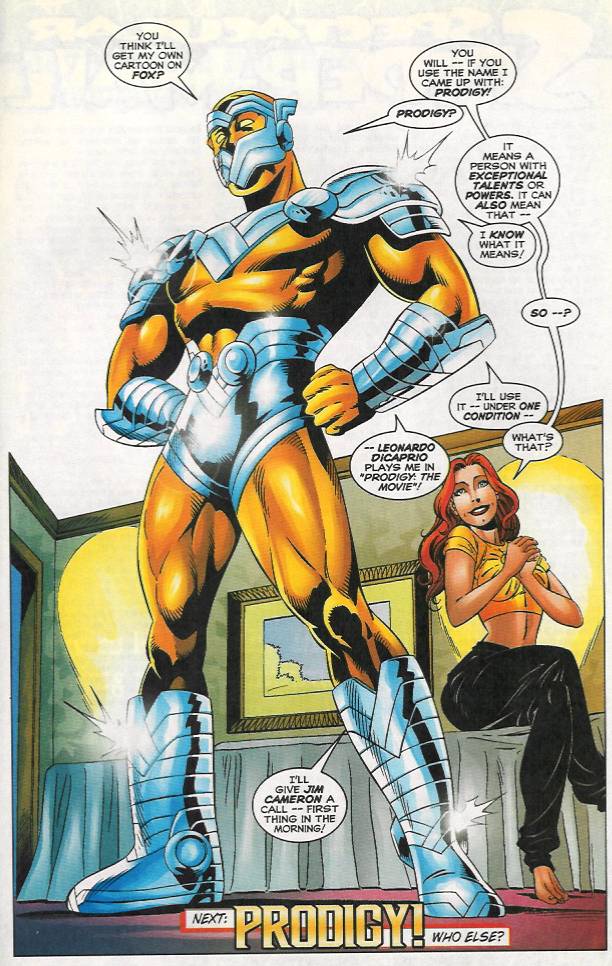 In the end, the White Rabbit has little impact on Spider-Man as a character. The most impactful part of this story is actually the creation of Prodigy. Spider-Man’s time as Prodigy, while short lived, shows a very interesting side of Peter Parker. By the nature of the Prodigy costume itself, complete with fake muscles, Peter is trying to change himself into what he believes is the ideal hero. And it works in a way. J. Jonah Jameson even ends up loving Prodigy. He sees him as a true hero. At this point in Peter’s existence, he is still unsure of how to be a hero, and he’s trying different identities the same way a teenager goes through different phases. He’s trying to discover who he is, and, as the arc goes on, he eventually realizes that his true identity was always Spider-Man. It’s a really cool take on believing in who you are using the outlandish world of a superhero.

And with that we have another rousing week in comic book history. If you take anything away from this article, I want it to be that a rabbit robot with carrot missiles is an amazing idea. I really want DC comics to grab this character and reboot it into a dark and gritty version of the Easter Bunny for Superman to fight. BATMAN V SUPERMAN: DAWN OF JUSTICE is a cool idea, but GIANT ROBOT EASTER BUNNY V SUPERMAN is way cooler.