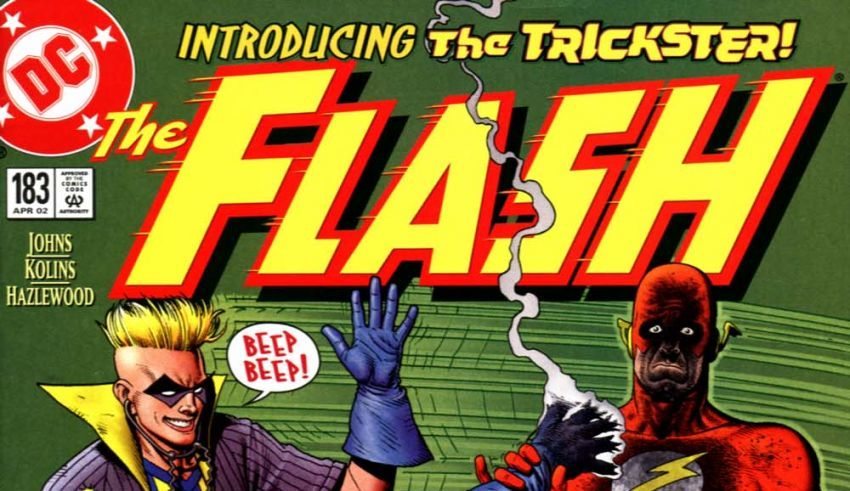 Welcome back to This Week in Comic Book History! This time, we’re going to continue in the fine tradition (established last week) of celebrating a holiday well after it happens. So, happy late April Fools’ Day, one of the absolute strangest holidays in the United States. April Fools’ celebrates the jerk in all of us as we try to torment those we love, and that’s an important tradition. To celebrate this bizarre event, we’re going to look at the ultimate trickster with an uncreative name, the Trickster, a man whose entire character is based around committing crimes using children’s toys.

Like many of the Flash’s classic villains, Trickster has seen many incarnations. The original Trickster, James Jessie, first appeared in THE FLASH #113 in 1960. Right before THE FLASH #183 was released in 2002, James Jessie retired from villainy and his mantle was taken by Axel Walker. The idea that the original trickster retired and his guise was taken by a younger person is one of the most important concepts of the Flash and his enemies. The Red and Yellow has seen a superhero dynasty of its own: Jay Garrick gave way to Barry Allen, who died (and then came back in Final Crisis, but there’s not enough time to unravel that thing) and gave way to the Flash of our story, Wally West.

The passing of the Flash mantle allows the character to evolve much more than the majority of DC Comics heroes. By passing the legacy of the Flash on, the character is able to tell a completely new story with the same villains and same hero. Barry Allen is very different from Wally West, which allows them to have unique problems and unique solutions. Yet the very core of the Flash (being, well, a guy who runs super fast) is still there.

In much the same way, an older, campy concept like that of the Trickster can be upgraded naturally. There is no huge personality shift in James Jessie to make him fit into the new millennium. Instead, we are introduced to a new character more fitting for the current time period, a new character who they believe naturally embodies the time period. This allows culture to dictate a character’s personality, rather than forcing a character to change unnaturally to meet current cultural ideals. That said, 2002 was a while ago at this point. How well do Axel Walker and his gloves covered in the word “Yo” hold up now? Honestly, pretty well, yo. 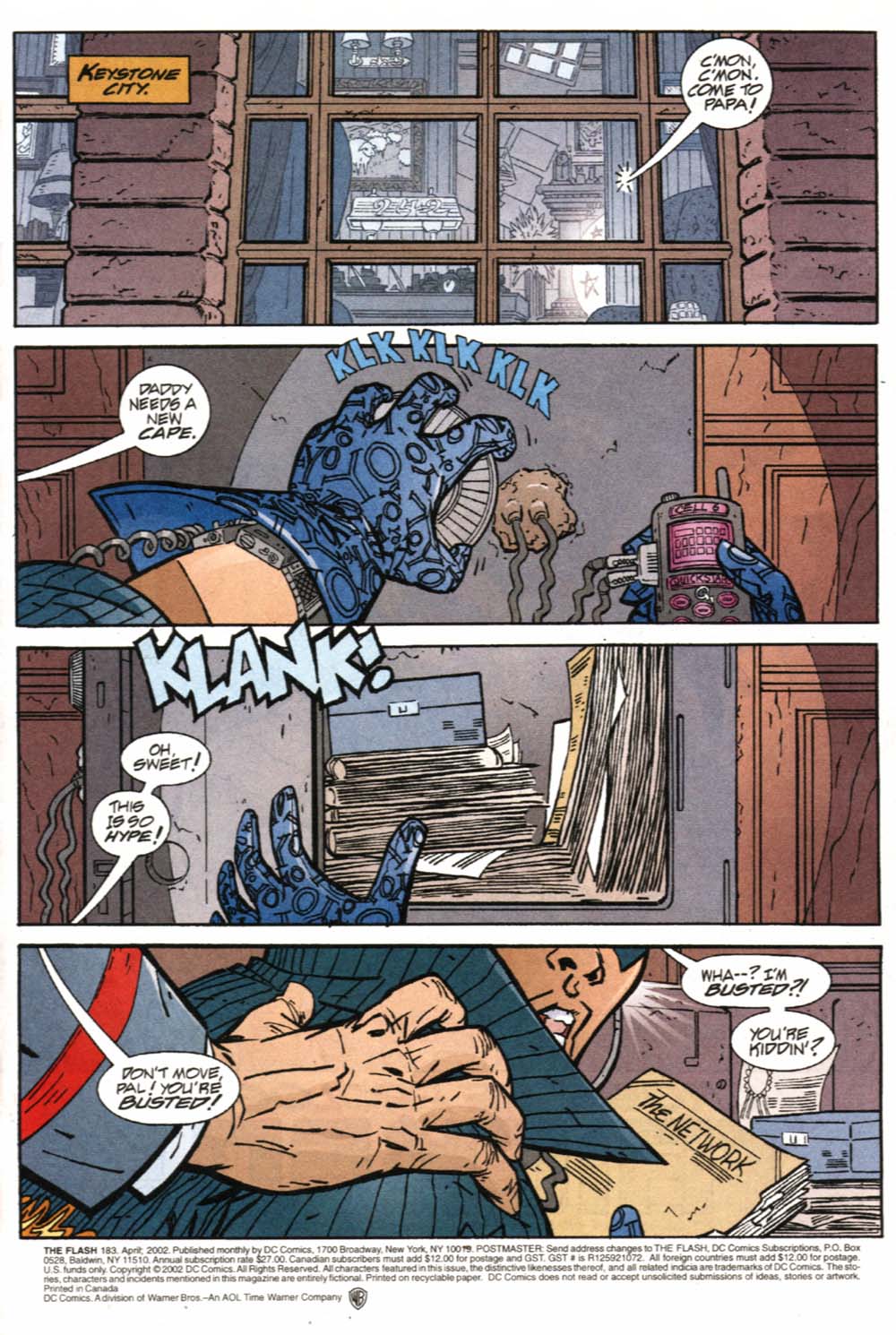 The story wastes no time getting started. We open with the Trickster stealing files out of a vault, in the middle of a police station, in the middle of the day. The man has huge stones. He also has some of the most hilarious, and at times nonsensical, gadgets of all time. When some cops come to stop him, he smashes them with a spring-loaded anvil with “WAM” carved into the top. A Wamvil, if you will. (I’m proud of that joke. I’m not taking it back.)

READ: The Flash is on TV too! Check out our comparison of the show and the comics!

Another group of officers enters the room and the Trickster pulls out his bubble gum and throws it at them. Somehow, it expands and hardens to trap them all. It’s really apparent that Geoff Johns is having a lot of fun with this character. Each of his gadgets is really something you would see a child dream up as a weapon, and they help show how inexperienced the Trickster is and how casually he takes being a criminal. He could die, but instead of trying to survive by any means necessary, he would rather crack jokes and hit people with the wamvil.

Oh, and he also has shoes that apparently can fly because they run on fairy dust. Most of his gadgets follow some kind of logic, but with the magic fairy shoes, they just kind of said “screw it.” He can fly because flying is super cool, yo. Quit asking questions. 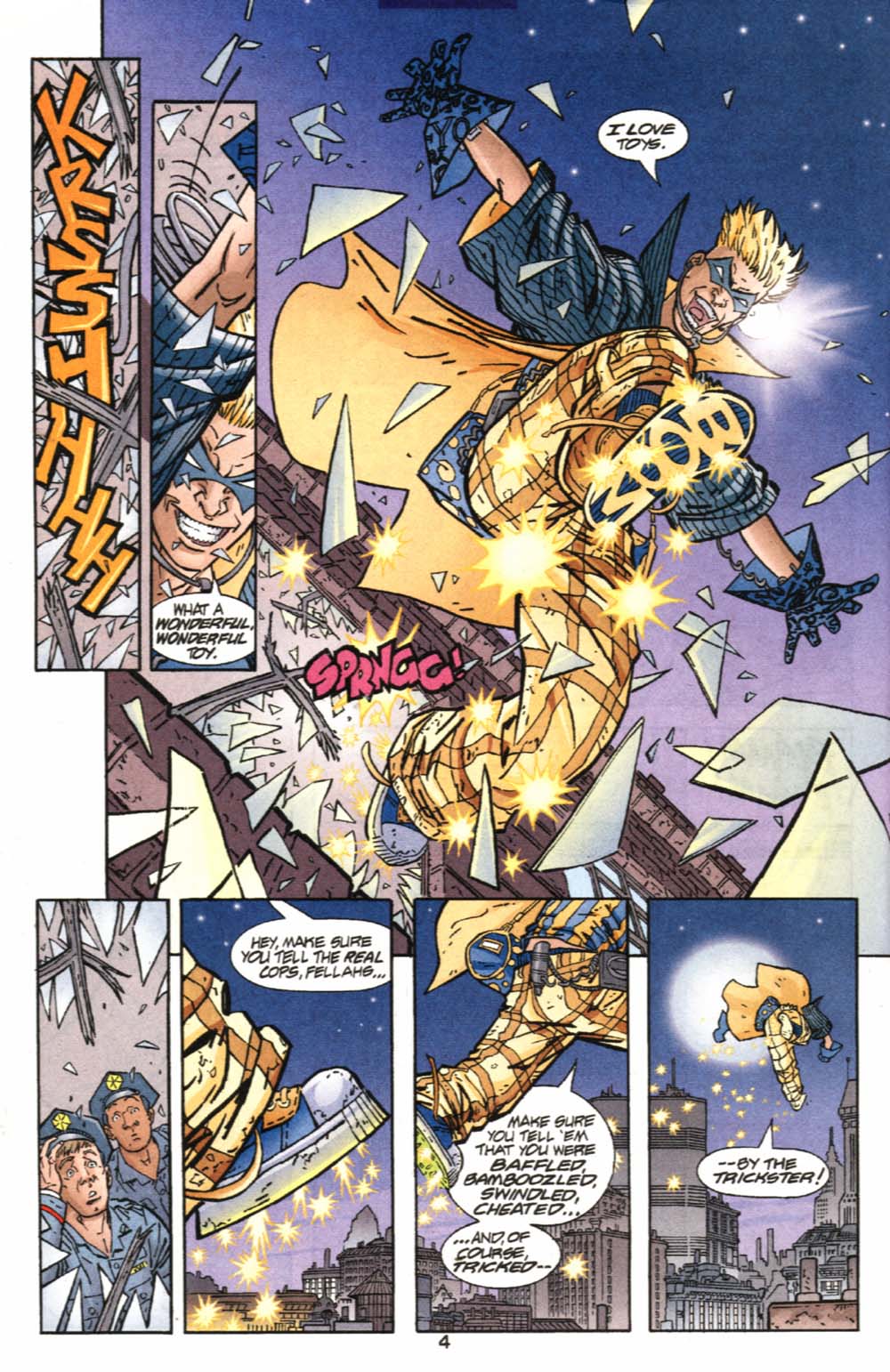 Back in the West household, Wally West is sprinting around the house like a maniac for no apparent reason while his wife, Iris, watches a child they adopted while they both lived in the future. While the Flash may have the advantage of having an adaptable superhero mantle, it still has the disadvantage of being a DC Comics property, so insane time travel stories are a must. There is also a mention of Bart Allen, also known as Impulse, who is Barry Allen’s great-grandson from the future who now lives with Wally.

It’s an extremely complicated family tree. This hasn’t even mentioned Jay Garrick from Earth-2. But, for everyone’s sake and my own personal sanity, we are not going into the multiverse history. This article has to end at some point.

Wally gets yelled at for being rude and running around the house, so he decides to run to the police station and do some superhero-ing. When he arrives, he knocks all the papers off of Officer Hunter’s desk and then catches and reorganizes them before they hit the ground. Wally is super inconsiderate to everyone, apparently, but little moments like this really show how goofy the idea of super speed is and how easily it can be adapted. Sure, he can run fast, but he can also think fast enough to organize hundreds of flying papers in a second. He would only need this power if he’s rudely knocking down stacks of people’s papers, but it’s still a neat use of super speed. This must be a normal occurrence, though, because the cop doesn’t even flinch. The two just casually begin to talk about the Trickster when said Trickster arrives and pulls out his best weapons yet: a spring-loaded boxing glove that he uses to put a sticker on the side of Officer Hunter’s computer. 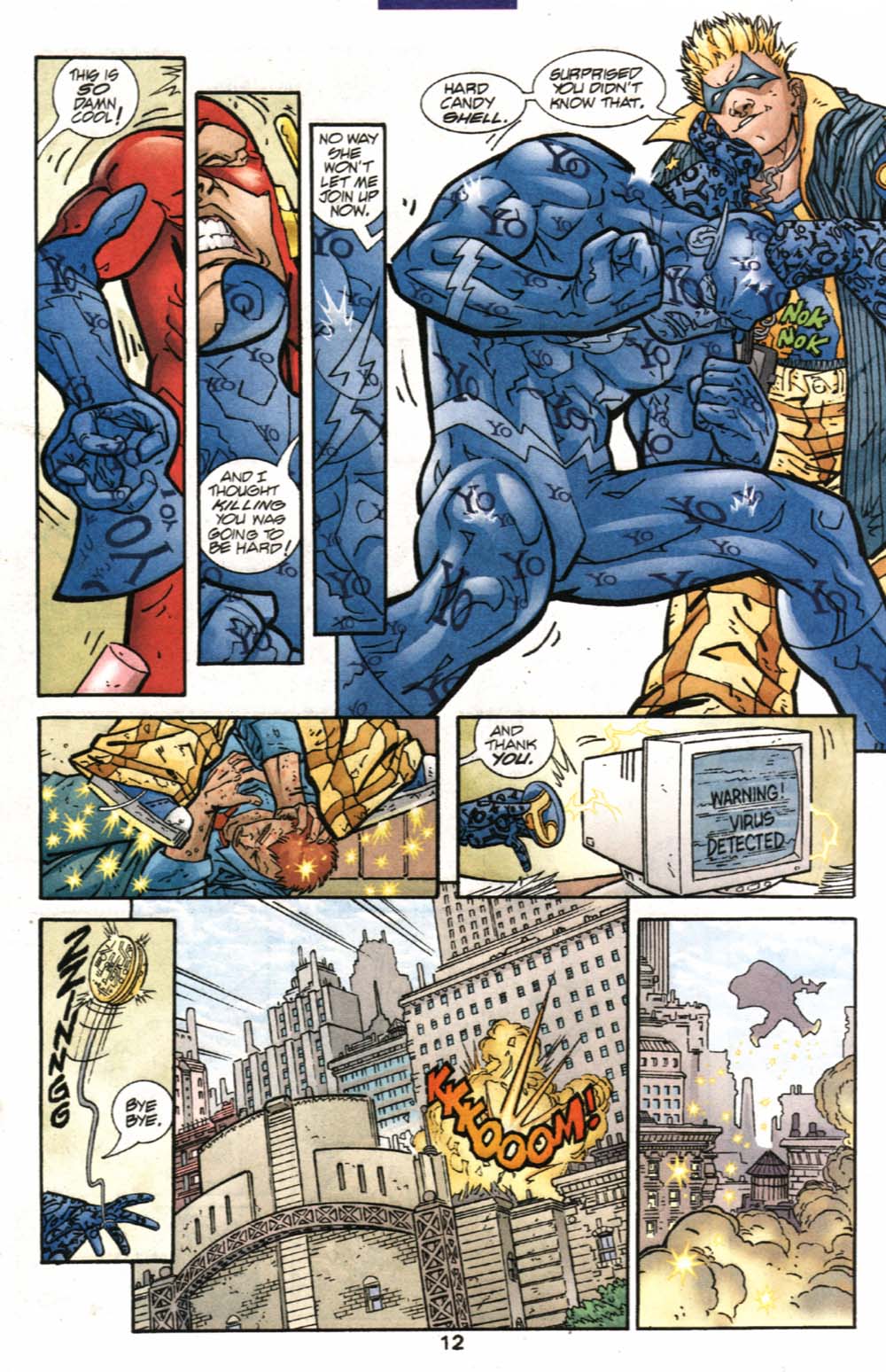 Every part of that plan is over the top but oh so perfect in showing how outlandish the Trickster is. The Flash grabs his hand, but it turns out to be fake and covers Wally’s hand in a hard candy coating (!) that he can’t escape. How has that not become a regular way to stop the Flash? And, of course, the hard candy shell says “Yo” all over it because, at this point, why not?

READ: Want more Flash comics? Check out our review of THE FLASH #49!

In the meantime, the Trickster’s sticker somehow plants a virus on the computer and removes all of its files. (It seems that Johns was a bit unsure of how computers worked in 2002.) This allows the Trickster to escape and run back to the Network, the secret group of supervillains whose files he had just destroyed at the police station. The idea of a massive supervillain team-up is always a novel concept, but too often they fall into the same trope of bad guys who can’t get along and threaten to kill each other, no matter how important their combined goals are. This is no different. In the three Network’s three pages of this issue, I’m fairly confident two of them die. This concept is one of the main reasons supervillain team-ups fail to live up to their potential. 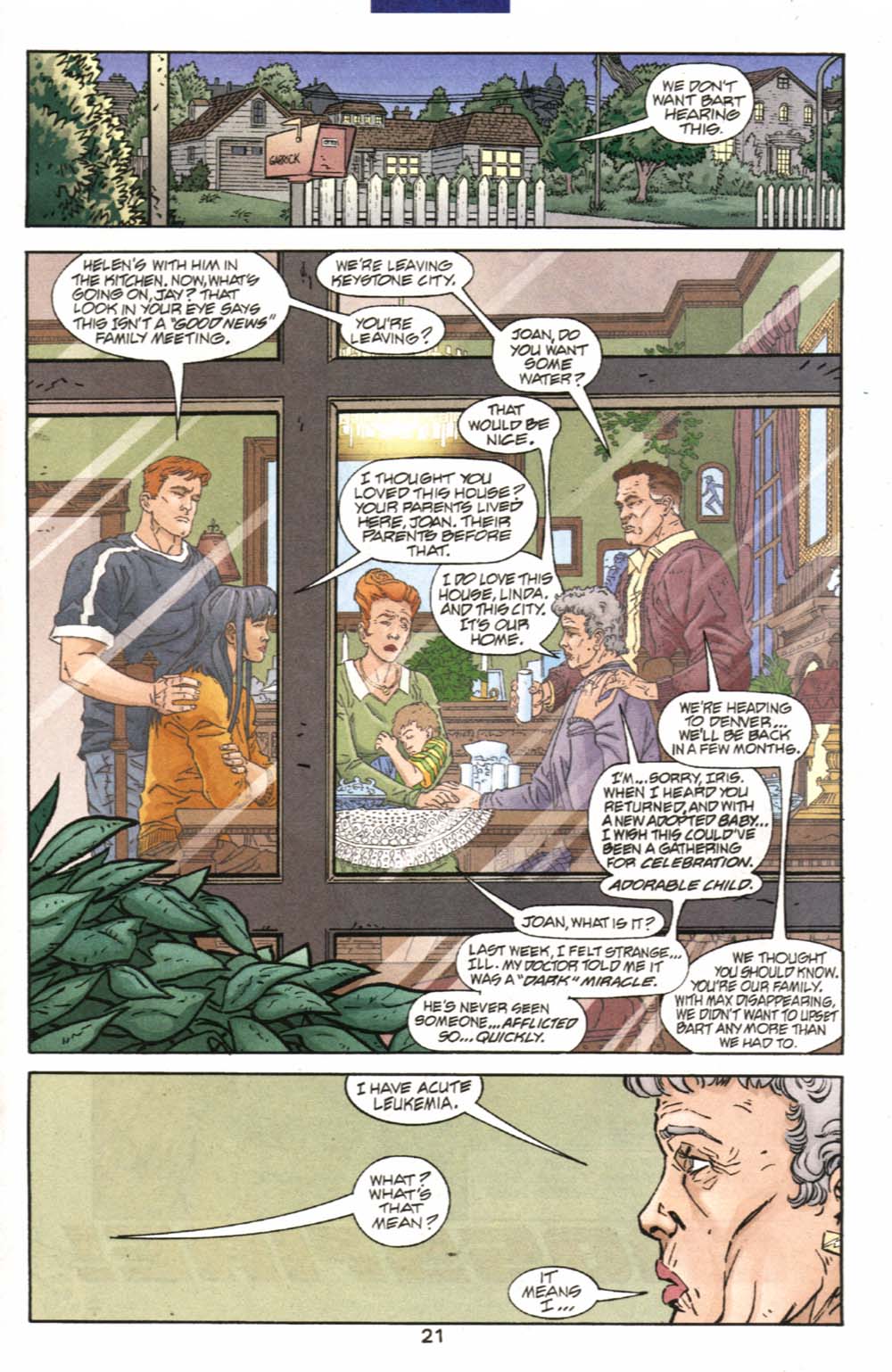 After all the ridiculous fun that is the Trickster’s gadgets, we end on a sad note. Back at the West house, Jay Garrett’s wife has been diagnosed with leukemia and is dying. And, with that note, we end an amazingly fun and goofy comic book with one of the saddest things that can happen to a person. Alas.

On that somber note, thanks for tuning into This Week In Comic Book History. Maybe next week we’ll celebrate St. Patrick’s Day, since it happened last month, and at this point timing means very little. Or maybe the topic will actually make sense? You’ll have to come back to find out!