The Smithsonian was already onto something when its magazine interviewed The New Yorker art director and Toon Books publisher Francoise Mouly in November of last year.

In that interview (captioned as “[t]he amazing tale of a determined art director who harnesses the powers of illustrators around the world to blow kids’ minds”), Mouly commented on why comics can be such powerful teaching tools: “Kids don’t just sit there and wait for knowledge to be shoved into their brains. Reading is making meaning out of squiggles, but the thing with comics is that no one has ever had to teach a child how to find Waldo.”

READ: Looking for more new comics for the younger crowd? Check out our review of TINKER #1!

Not three months later, the Smithsonian had announced its move from cataloguer to publisher, presenting the Secret Smithsonian Adventures as a chronicle of four time-traveling middle schoolers fighting to preserve history as they make their way through various galleries and exhibits. 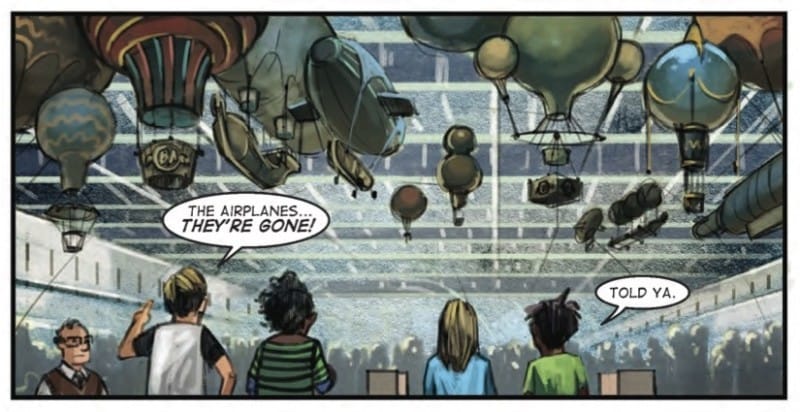 The series’ first installment, THE WRONG WRIGHTS, written by Chris Klientz and Steve Hockensmith with art from Lee Nielsen, is a treat. When educators get ahold of anything fun, 10-year-old me shivers. It seems so easy to do the education-made-fun thing in a way that results in fun-made-boring. Maybe my expectations are too low, though, because when the project goes well, we get SCHOOLHOUSE ROCK and HAMILTON.

THE WRONG WRIGHTS isn’t either of those, but it is an entertaining and, yes, informative comic. Its middle-school heroes take a trip to the National Air and Space Museum, where they discover that all of the airplanes have been replaced with hot air balloons. Using some time-travel-capable Fitbits, the kids head back to 1909 to try to save the day (and the future of air travel).

READ: Comics can teach us a lot! Head over to our section on comic book theory for more!

The time-travel storyline isn’t the most complex, as some anonymous villains try to sabotage the airplane industry for their personal pecuniary benefit, but it works in this context. Plus, even if the creative team’s explanation of time travel amounts to a bit of handwaving—the kids and their mysterious museum guide were the only people who could feel the change in history—I appreciated their efforts to address sci-fi readers’ sensitivities to time travel paradoxes. 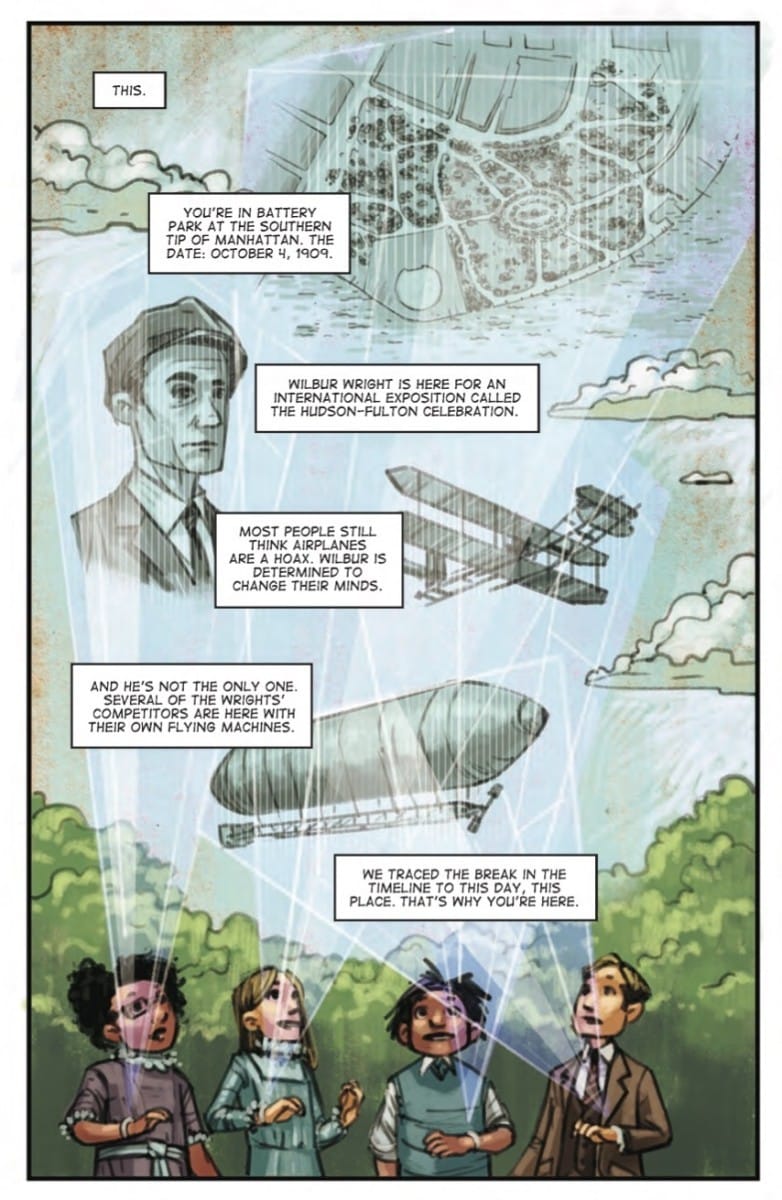 The artwork in this comic doesn’t rise to the level featured in Toon Books’ various editions, but the creative team does a genuinely good job of integrating bits of historical material into a fun adventure. The star of the show is Katharine, the Wright sister, whose role in the success of her brothers’ flying machine is underscored (and even expanded, thanks to the story’s time travel shenanigans).

THE WRONG WRIGHTS is a nice first offering as the Smithsonian tries comics on for size. Parents and educators should keep their eyes peeled for this and the next installments.