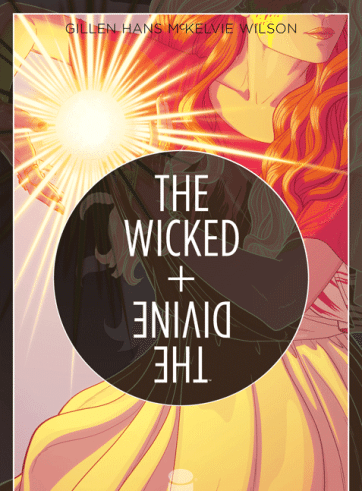 Fresh out of NYCC: Gillen, McKelvie, Hans, and Wilson, and the rest of THE WICKED + THE DIVINE team pushed out a beautifully illustrated, complex issue of this amazing book.

This issue, like the last few, has us viewing the events of the story through the eyes of one of the gods. In #15, it’s Amaterasu. All of the gods gather at the nearest hospital in the aftermath of the apparent suicide of a friend, but they are told that Baphomet is responsible. 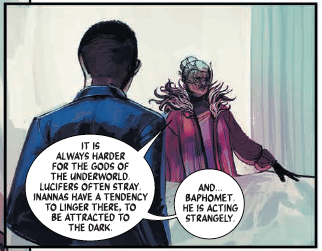 The group splits up and leaves, fighting, with Amaterasu left behind. Since this issue was clearly from her perspective, it delves into her past, into her life before she was a god, and we learn that someone close to her died on her, either from suicide or violence.

The body of her friend, Tara, is kept at the same hospital as Kerry, another recuperating friend. Amaterasu goes to visit and finds Minerva, another god, who informs her that all of the murders aren’t adding up. At that time, Urdr shows up and she and Amaterasu get into a mild argument that ends in Amaterasu transporting them to Japan and them resolving their fight there. The issue is ended by Amaterasu at a shrine, sharing prayers with each fallen member of the pantheon. 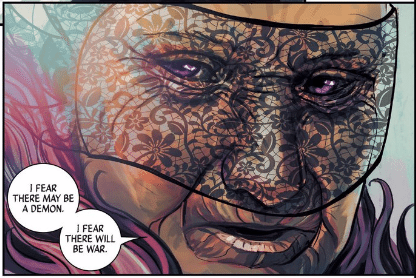 This issue has a lot of detail. The whole series is like this, but we see things starting to add up for Minerva and the others in regard to the deaths of the gods. This is not a comic series to pick up in the middle and think you’re going to understand everything. I mean, I’ve been reading it since it was released and I have to go look things up sometimes.

THE WICKED + THE DIVINE #15 also deals a lot with identity. Urdr, who is both a transwoman and Japanese, spends a lot of the issue talking about privilege and when she is doubted on her knowledge of cultural history, she makes it a point to address the fact that not everyone can afford to travel. 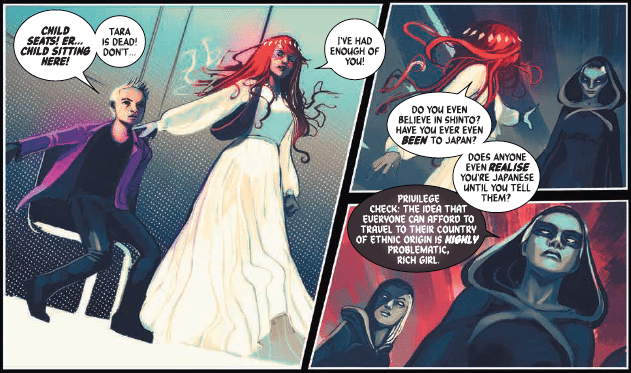 While this issue can be kind of confusing in regards to plot, especially if you are more of a casual reader, the art leaves no confusion.

The guest artist for this issue was Stephanie Hans and her work is stunning. Her use of colors and detail is amazing, especially when it comes to adding specific details to the gods themselves. Hans’ treatment of all of them is wonderful, but the magic she puts into Amaterasu specifically is stunning. In previous issues you could see why Amaterasu is a cosplay favorite, but if you had any doubt this issue would take that away from you.

CLICK: Check out our photo coverage of cosplay from NYCC!

To sum up, while this issue has a lot of plot – sometimes confusing – there’s also some gorgeous art from both Hans and McKelvie. If you want to pick this book up it’s probably best you start at the beginning, but don’t let that discourage you! Gillen is a wonderful writer and Hans, McKelvie, and other guest artists have amazing illustrations consistently.