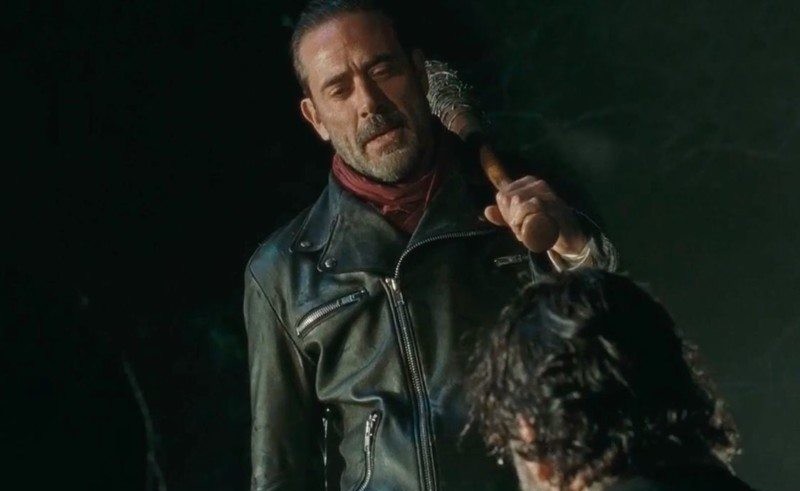 [spoiler title=’SPOILERS for AMC’s The Walking Dead’ style=’default’ collapse_link=’true’]Please note that the following article contains spoilers regarding the season 7 premiere of The Walking Dead as well as references to the comics.[/spoiler]

Fans of THE WALKING DEAD are mourning the death of Glenn after Sunday’s season 7 premiere. Glenn was one of the few remaining cast members who had been around since the group of survivors first met outside of Atlanta. Glenn was the voice of reason and courage and will sadly never get to teach these values to his unborn child. Audiences fell in love with his naive optimism for a better world, and last Sunday, Negan made sure that Glenn would never see one. THE WALKING DEAD is a show notorious for killing off its characters, but Glenn’s death in particular was shocking for fans, because it seemly came out of nowhere.

Anyone that remembered watching Glenn die in the graphic novel was sure to relive the experience in this episode. The scene borrowed nearly every aspect of the book’s scene, including Glenn’s deformed head, last words, and Negan’s dialogue. The only difference was that Glenn lost Negan’s game of “Eeny, meeny, miny, moe” instead of Abraham. Glenn attempting to say goodbye to his wife after the first blow to the head was especially hard to watch. 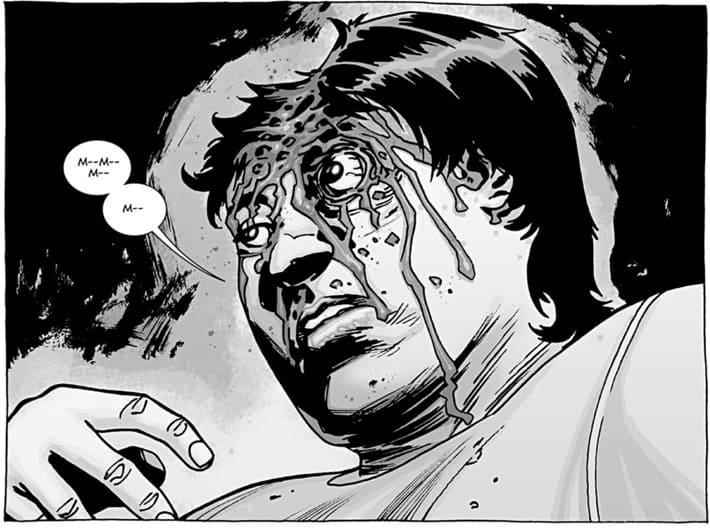 While Glenn’s departure leaves the show with one less main character, it is the manner in which Glenn was killed that has significance. Specifically, his demise was surprisingly sudden, which sets an interesting precedent for the coming season.

When it comes to character deaths in THE WALKING DEAD, a noticeable pattern has formed. The time devoted to a character’s end is directly related to how significant the character is. If you decide to kill off a small character, the effort is typically minor, usually in the backdrop of a larger event. If, however, you’re killing off a major cast member, it becomes a spectacle: a farewell to the character that the audience can appreciate. This usually means devoting an episode to the character, building up the death, then layering on context and emotional drama to give the character’s mortality some deeper weight. This strategy acts as insurance, to make sure their demise packs an emotional punch. Tyreese’s death had an entire episode devoted to it, full of flashbacks and hallucinations. Lori’s death was an hour-long scream-fest. Beth was given an entire subplot before she was killed. THE WALKING DEAD throws as much emotion and drama onto a character that can stick before giving them the axe. But after 7 seasons of this, the audience is starting to catch on. Instead of lending emotion, the characters end up with targets on their backs. The audience eventually picks up on this strategy, and begins expecting a character to die when they suddenly become the center of attention. When the character bites the dust, it no longer feels emotional. It just feels expected.

Glenn’s death is in stark contrast to his fellow survivors. After Negan was punched by Daryl, he felt the need to punish the group and seemingly picked Glenn at random. It was never indicated to the audience that Glenn was in danger. Negan raised his bat, and Glenn was dead in less than a minute without even speaking to him. It was without warning, and we felt unprepared to handle it. Rather than drawing out Glenn’s death to take up an episode, he was killed in one single scene, and the story continued on. Needless to say, this was a shock for fans who took to social media to express their disbelief.

The decision to kill a character suddenly and without warning can have a lasting effect. As an audience, we lose that little bit of hope that this dangerous world somehow doesn’t apply to those we care about because we want them to live. Psychologically, there is an emotional dissonance that forms as we realize that our feelings don’t affect the story’s progression. This feeling of “no one is safe” adds a layer of intensity to the story’s environment, reminding the audience that anyone can go at any moment, and we might not get a chance to say goodbye. We appreciate the time had because it feels more valuable.

This method of character killing should be familiar to anyone up to date on HBO’s GAME OF THRONES, a show infamous for killing off cast members without warning.  In fact, the manner in which GAME OF THRONES kills its characters is so unexpected that there are even fantasy leagues popping up where you bet on which characters make it through each season alive. This type of game can only exist in a cinematic universe where no one is safe.

Glenn’s death is a refreshing new feel for THE WALKING DEAD and potentially marks a new trend for the show. If Glenn’s swift end is representative of what’s to come for season 7, we are left wondering who else is going to swiftly get the blunt end of Negan’s bat.  The fact that Glenn’s fatality was unexpected (besides lining up with his death in the graphic novel) indicates that THE WALKING DEAD is changing the way they handle it. For viewers of the show that have caught on to THE WALKING DEAD’s old formula, Glenn’s death could possibly be the start of something new and exciting. Will this new season be proof that plot armor is a thing of the past? 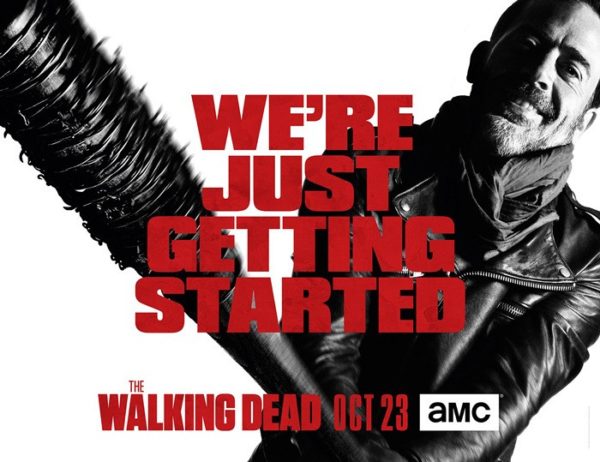 I certainly hope so.