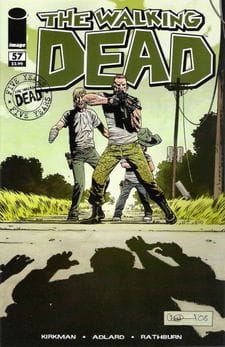 Robert Kirkman writes many of the villains in THE WALKING DEAD with little to no back-story about who they were before the apocalypse. And for good reason- this gives us less sympathy for our antagonist’s monstrous acts. The reality of the situation is that even the most downright evil people that Rick and company come across were most likely resembling any of us, living normal lives and doing normal things. We as readers are often left to wonder, though, how or why they became so villainous? None beg this question more than the short-lived group dubbed the Marauders, who were introduced in THE WALKING DEAD #57.

READ: More analysis on THE WALKING DEAD villains on the Hunters!

After some turmoil on their journey to Washington D.C., Rick wants to head back to his police station to gather supplies, as the road ahead would require the extra firepower. He takes Abraham and Carl along for the expedition, while the rest wait at a gas station. While making their way toward Rick’s hometown, they decide to stop for the night. While Abraham is on watch duty, a group of three bandits attack, holding them at gun and knifepoint. Rick attempts to fight them off, but is bested. For not cooperating, the Marauders decide to rape Carl. As one of them pins Carl down, Rick rips out the throat of the Marauder who is restraining him with his teeth. Using this as a distraction, Abraham kills the other before Rick mercilessly stabs the Marauder who had Carl pinned down to death.

In the television series, the Marauders are referred to as the Claimers, and as with many of the villains on the show, they are given a longer story arc than the comic book series. The Marauders are first seen while searching the house where Rick, Carl, and Michonne are residing after the prison falls. Rick is the only one in the house at the time, and he makes a harrowing escape after killing one of the Marauders in a restroom in the house. For killing one of their members, the Marauders decide to track down Rick. On the Marauder’s mission, they run into and accept Daryl into their band, seeing him as one of them. They later find and ambush Rick, Carl, and Michonne. The result is similar to the comics with Rick ripping Joe’s throat out with his teeth and stabbing another Marauder as he tries to sexually assault Carl. Meanwhile, the rest are shot.

How did the Marauders become the horrific predators of the new world? The answer lies with who they were before the walkers inhabited the earth. There are two types of people I can see becoming a Marauder…

The simplest conclusion would be people who have always been monsters, but now no longer have to hold back. With the end of civilized society, they are now able to be themselves. Imagine the rapists and murderers of the world roaming free without the fear of being caught by police.

Then, there are the people who repressed their inner demons. This is the sort of person who had their darker side repressed; people who never had the opportunity to be the monster within. The rules of society had kept their urges in check, until now.

Whichever type they are, the members of the Marauders seem to be inherently bad. They are quick to respond… unkindly and offer weak justification for their vile acts. They quickly jumped to the conclusion that they should and must rape Carl for the “offense” of Rick defending himself. In the TV series, they believed they should rape Carl and Michonne before killing them all. At least in this case, Rick killed a fellow member of the Marauders, but that’s their justification? Their punishment is rape and murder? Of a child no less? Even in the world of the walkers, that is extreme.

In the comic book, Rick lost the fight to the Marauder. Furthermore, one Marauder was already creepily eyeing Carl as he slept. If the Marauders only wanted take their “stuff,” they would have just taken it and left while they had Rick, Abraham, and Carl in submission. Instead, they stayed to “have some fun.” As for the show, I’m skeptical that the Marauders wanted to avenge their fallen cohort who met his end on the toilet. They seem very open to killing their own. The repercussion for lying is a beatdown by the rest of the Marauders, so any sympathy is unfathomable.

The Marauders are just people who need an excuse to be monsters. They could be your neighbors and friends. Their inhibitions are only stymied by the rules that are in place in society to prevent the most obscene atrocities. THE WALKING DEAD is structured around the what-if scenario where there are no laws to be enforced. Laws are made to shape society and without them, the door is open for the Marauders.