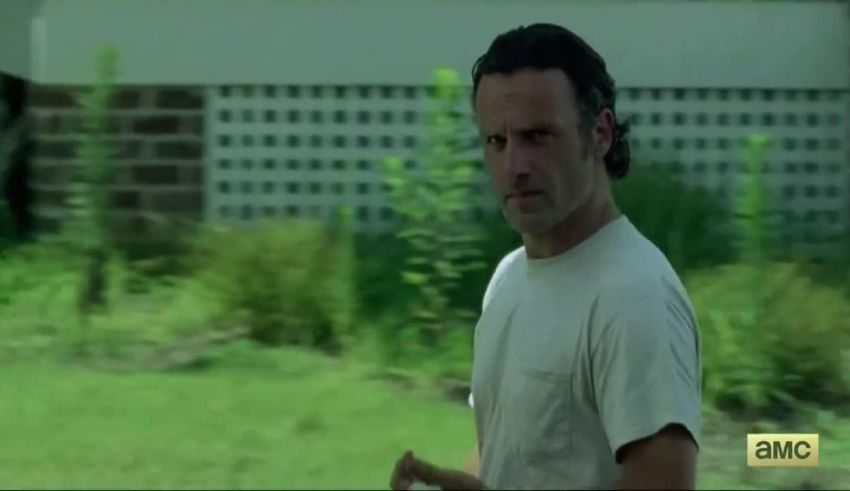 HOLY COW, Ladies and gents. This week’s episode of THE WALKING DEAD kicked off with a punch and ended with an explosion. We got a long-awaited resolution to a beloved character’s questionable fate and a major kick-off to some serious house cleaning that needs to take place around the weakening walls of Alexandria. “Heads Up” is an apt title for this week’s installment, as by the end of the episode our characters can afford little more than to get their heads on a swivel, stat. Seriously, there are about 500 Walkers spilling in through the now gaping hole in Alexandria’s fence…

For a moment, I’ll leave the gaping hole and dive into the most important development this week – GLENN IS ALIVE! Boom-shaka-laka! This guy is nearly indestructible! For those who need a refresher – a few reviews back, it was speculated that Glenn was protected by Nicholas’ body when they toppled off that dumpster into an army of the undead all those moons ago. Turns out, this is totally what happened; Glenn watched in horror as Nicholas did his best ‘human shield’ impression, allowing him to pull himself into hiding beneath a dumpster. Thanks, Nicholas!

I have to admit – I wasn’t entirely thrilled by this cliffhanger as a whole, despite its rewarding result. I feel as though we all sort of KNEW Glenn was alive – and with all the action surrounding this season as is… this whole enchilada felt a tad unnecessary! I understand the writer’s decision to raise the stakes, to keep us guessing, or to let us know that no character – no matter how precious – is safe within the universe of The Walking Dead. But… this whole “is Glenn alive fiasco”? It pretty much turned out to be your standard “Mess With the Audience” tactic.  Furthermore, fans of the comic know damn well what happens to Glenn… avoiding critical details – I’ll leave it at “it’s not the most fun thing ever”. Glenn is alive, and that’s AWESOME. Believe me, I’m thrilled. But again, this big moment in the season just felt… unnecessary. Tension created where it didn’t really need to be, or where other, possibly better tensions could have been built.

Anyway, to quickly sum up the remainder of Glenn’s journey this week… Glenn embarks on a trip back to Alexandria with Enid, who – for the lack of a better term – is being a fussy little shit. At one point, she actually points a gun in the poor guy’s face. It’s like… come on, Enid – we just got the guy back! In the end – the ultimate result of her interactions with Glenn boils down to a “pulling up of her boot straps”. Glenn tells her she needs to go on living, to honor the dead. I thought this was a sweet moment, actually… she’s afraid, as well she should be. It’s hitting the fan back at HQ pretty hard, and as we’ve learned recently – Enid is no stranger to losing those important to her in excruciatingly grizzly ways. Eventually … Glenn convinces her to push on – and they find some balloons left behind on the road back home – and use them to signal Team Grimes (and most notably Maggie) that they are still alive. I thought this was a clever moment, and very touching.

Admittedly, the remainder of the episode doesn’t really yield any major, major developments to the conflicts at hand. Some cans of worms are officially opened, that is for DAMN sure. But the cans of worms aren’t necessarily shaken out on the table to wriggle around exactly.
One of those big cans of worms would definitely have to be the fact that Morgan’s cat (or Wolf, rather) is out the bag – ie: Carol knows that Morgan is harboring one of the Wolves in secret within the walls of Alexandria. I just have to say – seeing these two characters, possibly two of the show’s best, and their totally different ideologies squaring off has been one of my favorite elements of the show thus far. Carol and Morgan brandish such polarizing moral codes  – and seeing them coming together provides some deep character conflict within the main narrative. Though we’re provided yet another cliffhanger (we more or less leave these two off with Carol looking at Morgan, going “WTF, dude?) – this one is totally worth it. Especially considering Carol and Morgan can’t return to this issue until after, you know, they deal with the whole “tower collapse” thing.

The next can of worms comes in the form of Rick Grimes and his ability to make friends and enemies at the same time! Rick got a ton of praise this week across the board – despite FREAKING out on Tara for risking her life in change for an Alexandrian’s (Spencer, actually… Deanna’s only remaining family member/son). Rick is getting positive affirmation from Deanna and others alike for being a solid leader during crunch time – which is fantastic to see. What ISN’T so fantastic, however – is that Ron is clearly going to exact some sort of revenge against Rick for killing his father. After an awkward shooting lesson with Ron and Carl, it becomes apparent that Ron is going to go “eye for an eye” and pull a gun on Carl at some point. Carl, as readers of the comic will recall, undergoes some SEVERE head trauma – sparing as many details as possible. I’m placing a bet: in the ensuing chaos of the walkers breaking through the walls, Ron will clip Carl – and Carl will take on his new, grizzly look (as he now appears in the comic).

The episode ends with a surprising and elegantly filmed tower collapse, as Rick and a few Alexandrians ironically attempt to brace the walls against the growing army of Walkers… Needless to say – this was the episode’s real, secondary ‘Holy Shit’ moment outside of Glenn’s fate being revealed. Yet another appreciated cliffhanger, bookending an episode that – to be honest – once again felt a little ‘thin in the middle’. This season and its compressed approach to completing the narrative has been a tad rife with this issue… we’re treated to these awesome cliffhangers that frame an episode at the top and bottom, which definitely aid in keeping us watching. But entire midsections to a few of these installments seem so thin…  delivering already obvious information… or retreading the same themes, over and over again (life being difficult, needing to just carry on, trust issues, etc.)

So, we resolve ourselves to another week of waiting! Personally, if I had a choice between going back to Daryl/Sasha and Abraham – or seeing this Alexandria wall-breach through – I’d have to go with the wall breach. Then again, I can’t help but wonder who uttered “help” last week on Daryl’s walkie-talkie, as it doesn’t seem it was Glenn, after all.

Either way, it’s the mid-season break next week – and if the episode stays true to the trends of Season Six – we know it will at least begin and end with a bang! Let’s just hope that bang isn’t a result of Ron shooting Carl in the back. Stupid, Ron!

Have a great Thanksgiving (if you’re celebrating said holiday, that is) everyone! Thanks for reading. Now, go eat some stuffing!