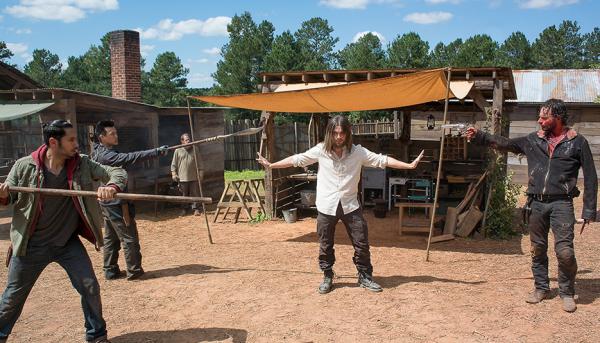 jesus and rick at the hilltop conflict

“We’re on the same side… the living side.”

Last week I discussed THE WALKING DEAD taking a reprieve from its usual zombie machete-ing (that’s a word, right?) carnage with a rather humorous installment.

This week, the show continues along the path with a more positive temperament in an episode that introduces a brand new community of survivors into the mix – The Hilltop community. Granted, we all know this is a bridge to something much more insidious. After all, Negan and his Saviors are still out there. And yeah, Rick totally ended up covered in someone else’s blood again (I swear whenever we meet new characters the man cannot go ten minutes without popping someone). But “Knots Untie”  did more than just charm us with this new Jesus character, or give us a little insight into Abraham’s colorful euphemisms for ‘making babies’. It also gave viewers the satisfaction of knowing that our main characters are building toward a destiny much bigger than the borders of Alexandria.

That destiny involves collaborating with others, whether Team Grimes is willing to trust the friendly faces of the zombie wasteland or not. We’ve recently seen Rick and Daryl making supply runs. Sometimes, those supply runs end up with a Jesus. Hey! That’s great! He’s really cool, right?! Other supply runs, however, provide little more than grave danger and character deaths. With a blooming community like Alexandria it should come as no surprise that food shortage is becoming an issue. So – when Jesus reveals he comes from a settlement of survivors, one which might be willing to trade supplies, it’s a clear move as to what needs to be done. Rick and Co. are going to have to trust the man and, in the very least, investigate his home base called The Hilltop.

This is a plot development I’ve been waiting on for quite some time now, as I’ve found it one of the more interesting narrative developments that came along within the comic. It’s valuable to remember, as an audience, that things aren’t so peachy in the world of THE WALKING DEAD. Our protagonists don’t have first-person-shooter style unlimited ammo in their weapons or food conveniently located on the floor in random locations. Resources are rare and valuable. Furthermore, this development represents a massive dynamic shift in how our survivors function and dictate themselves. Our heroes now begin a transition from scraping and clawing through survival, to discussing and negotiating through it among others who may or may not think like them.

With that, negotiating happens to be an integral piece of  “Knots Untied” in both promising and ominous ways.

On one hand we’ve got Maggie taking the reigns with Gregory, the leader of The Hilltop. Arriving at the settlement, complete with the comics’ famous colonial Barrington House, which was beautifully realized by the production designers, Rick places Maggie in charge of negotiating a trading pact. “You’re going to have to start doing this…” he tells her, pointing viewers in the direction that Maggie may become a prominent leading figure among our cast of heroes.

Lauren Cohan handles her scenes with total conviction, at first wavering as Gregory more or less strips down Alexandria’s worth to nothing more than “a few bullets.” However, by the end of the episode, The Hilltop’s dire straights regarding Negan are clearly on the table. Maggie takes that opportunity and does some hard negotiating of her own, saying  “look man, you’re getting screwed by this Negan character, and we’re a bunch of badasses. Let us be badasses for you. But we want half of what you’ve got.” It makes for an interesting confrontation between Maggie and Gregory. It’s a negotiation born from realism rather than the usual cut and dry desperate hunger of the apocalypse. This provides a new dynamic for the show, one which I’m really enjoying.

The agreement between Alexandria and The Hilltop is a massive win, but also a small exercise in hubris. Though I love Rick’s confidence in believing they’re able to handle Negan, it ran against his usually cautious character to just sign up for killing him and taking back a Hilltop hostage without knowing more first.

On the other hand we’ve got Negan, with whom it seems there simply is no negotiating. We’ve finally learned what he’s all about within the universe of the show, and his arrangement with The Hilltop doesn’t deviate from the through-line in the comic. The arrangement? They give him half of all the goods they acquire or produce, and he doesn’t kill or torture them. Pretty solid deal, right!? They’re practically keeping their lives for a song!

Sarcasm aside, it is explained that Negan once killed a sixteen year old simply to prove a point. He also sends a message to The Hilltop, for not delivering as many goods to his crew, by having someone stab Gregory. Needless to say he’s a bad, bad, bad dude. But there’s so much more to his character than that, and here’s where my personal intrigue with finally meeting Negan lies.

CLICK: Find out about Shane, one of THE WALKING DEAD‘s first adversaries!

In the comic, Negan is the weirdest type of evil any character can be. He’s not just some barbed-bat wielding maniac with no rhyme or reason; he has a bizarre code of conduct and an even more grisly way of enforcing said conduct. Oddly enough if you play by his rules you’re totally safe (well, unless you’re that sixteen-year-old I just mentioned). But his rules, as we can see, suck hard. In the end, I definitely look forward to watching Team Grimes take him on. It’s going to be interesting, there can be no doubt.

The episode wraps with Glenn and Maggie meeting with an obstetrician, who lives at The Hilltop, that they saved earlier in the episode (how effing lucky is that?). We get a chance to see their first ultrasound and the new life they’re bringing into this insane  universe, a harrowing act in its own right and a very moving moment. However, we’ve already got one baby alive on the show, so we know this is going to go south somehow. Keeping my knowledge of the comic aside, I’m really keeping my fingers crossed for the TV version of Maggie, Glenn, and Maggie Glenn Hershel Dale Jr.

As for the last of the housekeeping here, the writers handle the hookup chronicles of Richonne with grace; Carl reacts fine to it (I mean, come on, his new mom can use a Katana) and the whole ordeal is couched easily despite Jesus basically blowing up their spot to the entire town. Abraham is given a bit more relevance as his love triangle from the comic begins to take form onscreen. His interest in Sasha is growing despite his involvement with Rosita, making him the luckiest ginger in the apocalypse.

All told, this was a solid installment! It was a tight episode with committed and plausible decision-making, and, more importantly, some logical groundwork being laid on larger future conflicts coming down the pipe. I’m really excited to see what’s coming and believe we have some great storytelling coming our way.