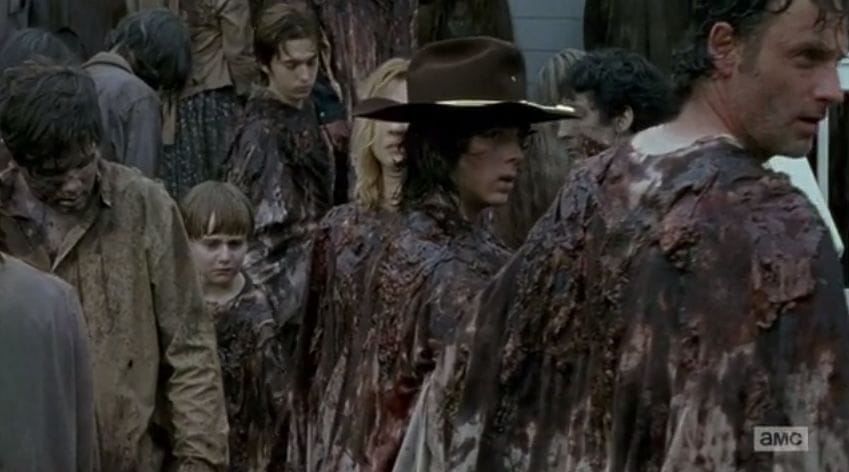 “If you have to eat shit, best not to nibble…”

The Walking Dead is back from its mid-season slumber. Back with a bang, in fact! Seriously! There was a grenade launcher and everything!

I’d be remiss if I didn’t kick this thing off by slapping down a good old fashioned synopsis. Sound good? No? WELL. You’re gettin’ a synopsis. Deal with it.

BEFORE THE BREAK:  We left off on two major cliffhangers. One: We witnessed Sasha, Abraham and Daryl  getting jumped by The Saviors – lest they turn over their valuables to Negan. Two: Rick, Carl, Michonne, Gabriel, Jessie, Sam, and Ron attempted an escape from walker infested Alexandria. As you may recall, they were pulling the ol’ “cover ourselves in zombie entrails and walk amongst the dead” trick, leaving us to keep our fingers crossed that it wouldn’t rain again.

CLICK: For more on the mid-season finale of THE WALKING DEAD, read our review here!

IN THE MID-SEASON RETURN: We find ourselves back in the company of Daryl, Sasha and Abraham, who find themselves face to face with a group of Negan’s cronies and the barrel of a gun. “Everything you own, now belongs to Negan” is the new code of conduct in town. We’re seconds away from seeing Abraham eat lead when, BOOM, in enters Daryl with a grenade launcher. Seriously – Daryl is a bonafide guardian angel in this episode… I guess that’s why he wears the wings!

For a mid-season return, this was one hell of an opening sequence. Truly tense, the actor behind Negan’s ‘cronie’ played the role with sinister coquettish playfulness that I found quite unnerving, and the timing of the grenade explosion was even quite comedic. I couldn’t help but chuckle as Negan’s gang got blown into evil confetti!

For the remainder of this installment, we deviate a few times into “side emotional arc” territory (the moral tug of war between Morgan and Carol, Father Gabriel’s struggle with facing the reality of what it takes to survive despite his faith… Rosita, Tara and Eugene arguing about… something or whatever), but the meat of this episode is easily watching Rick’s escape plan unfold. Covering themselves in zombie guts – Rick, Michonne, Carl, Jessie, and her kids (Sam AKA Bowl Cut and Ron) attempt to escape Alexandria, which is now shoulder to shoulder with the living dead. Fans of the comic recognized this as a segue leading to one of the most iconic ‘death sequences’ in the comic’s history… the death of Jessie and her son. The scene plays out in true-to-page fashion: Sam loses his cool, attracts walkers, gets bit, gets his mother eaten, and gets her hand chopped off. “GOOD JOB, SAM,” is basically what I’m getting at. This is a witch hunt for Sam.

READ: Our review of THE WALKING DEAD #151, for all of you fans of the iconic series!

Seeing this iconic moment actualized on screen was not disappointing in the least, in both the performances of the actors and the expertly crafted gore by Greg Nicotero, who also directed the episode. Rick even busted out his signature hatchet and chopped off Jessie’s hand! YOU’RE COLD AS ICE, Mr. Grimes. It’s an odd thing expressing such glee when discussing character deaths in a show like THE WALKING DEAD. Over time, the audience has been treated to more than a few side-characters within our cast of survivors. It can be tough to delineate between who we should be completely invested in and who won’t make it to lunchtime during any given episode. So, it’s not surprising when there are times the writers struggle to strategically “thin the herd.”  “No Way Out,”  however, was incredibly well-handled in that regard, while also treating us to some really fantastic canon moments.

WAIT, THERE’S MORE! In a pretty wacky twist of fate, instead of getting eaten, Ron pulls a gun on Rick! Viewers alike will recall before the mid-season break that Ron had it out HARD for The Grimes Boys, what with Rick killing his father and all. Before he can pull the trigger, however, Michonne steps in and kills him. This causes Ron to pop off just one faithful shot, which hits Carl WHERE!? Directly in the eye. So BOOM. That’s TWO iconic moments from the comic, now developed into the series! Again, it’s insanely well-handled, integrating this moment into a situation that couldn’t have possibly been worse and piling on the suspense.

When this show is at its worst, it falls pray to the same tropes we as viewers have come to expect. Sometimes the harsh cruelty of this universe doesn’t quite match the serendipitous events that take place. Sometimes, we’re slogging through character driven side-plots that don’t seem entirely necessary, as they play second fiddle to the main attraction. Then there’s the clunky cliff hangers. I mean seriously, is Glenn gonna die or WHAT!?

However, when this show is at its finest, it shines. Watching Rick engage straight up “Rage Mode” and hack away at Walkers was brutally satisfying. Watching the rest of the Alexandrians join in and make their last stand against the undead, complete with a speed-rolling-smash-cutting montage of people slicing and dicing, was absolutely vindicating.

CLICK: Zombies aren’t the only danger in THE WALKING DEAD! Learn about another dangerous villain!

This earmarks a sizeable turning point for the Alexandrians, as it seems more than ever that Rick can help lead them into being more than just sheltered survivors, a society with whom he can build a future. Rick believes they can build a better world in Alexandria, and more than anything he wants to share that with Carl. He wants to show his son not just the new world he deserves to live in, but a world they can build together. Despite this being a bloody mess of an episode, it ends with a fairly beautiful message of hope.

Alas, this is THE WALKING DEAD, and nothing good ever lasts. This episode may be just the icing on the cake. After all, Negan is still out there. With his cronies now freshly exploded all over the pavement, he’s sure to be REALLY pissed, too. How he decides to finally show himself, only time will tell, but when he does, one thing is for sure: it’s going to be ugly. 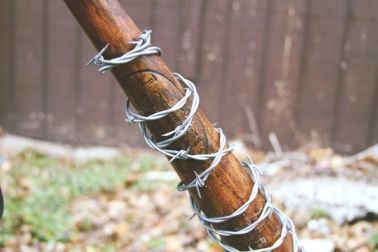 How did you like this season’s THE WALKING DEAD mid-season return?  Let us know in the comments!