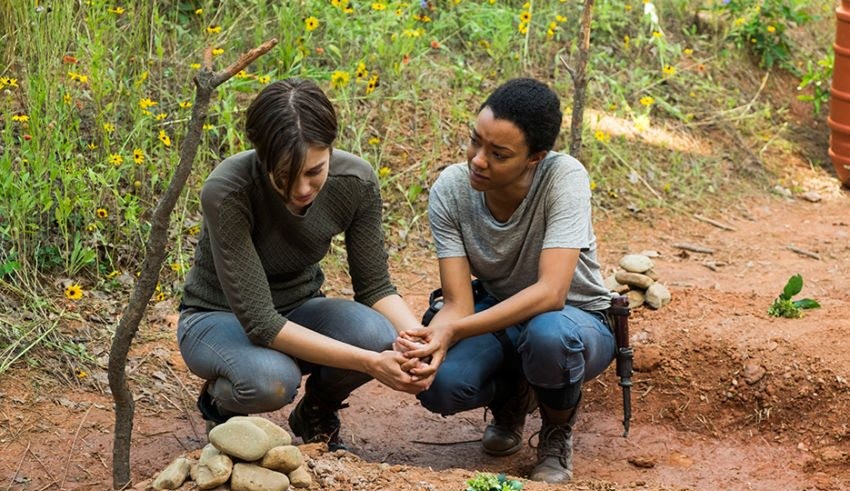 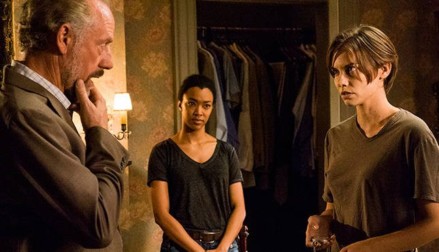 This episode follows Maggie through the Hilltop, after surviving the aftermath of Negan’s murder of Glenn, Maggie’s husband and father of her unborn baby. We learn that her baby is fine, and Maggie struggles to figure out what’s next for herself. She processes this struggle with two friendly faces, Sasha and Jesus, as the three of them argue with Gregory about staying at The Hilltop. Like every other episode this season, the Saviors pay our characters a visit, and continue to bully them and steal their lunch money.

This episode relied heavily on Maggie, Sasha, and Jesus, all of whom don’t have strong relationships with each other. But rather than build them, this episode decided to pretend that they have close relationships as they work together to convince Gregory to allow them to stay. However, their lack of relationships made these events feel artificial. Why is Jesus going out of his way to help Sasha and Maggie? Before this episode there was little to no interaction between these characters, so the episode is simply pretending that they’re all close. This is especially true for Maggie and Enid, who share a dinner conversation together towards the end of the episode. These characters aren’t close, and have rarely shared the screen together. Why has Glenn’s death suddenly made them close friends?

READ: Need to get caught up? Read the review The Walking Dead Episode 4 “Service”

Just like last episode, THE WALKING DEAD struggled to find a way to have the audience leave the environment the single story takes place in, and relied on a hastily produced and cringe-worthy B-story involving Carl and Enid. In this episode, Carl and Enid make their way to the Hilltop together. Carl crashes a car into a single walker in a moment that THE WALKING DEAD desperately wanted you to believe was scary for Enid. This isn’t the first time THE WALKING DEAD has used a character’s poor driving to force conflict in an episode. Like mother like son, Lori also crashed a car into a walker in the second season after attempting a nonsensical solo mission to save Rick.

Carl and Enid kiss after watching Negan’s men take supplies from the survivors, but not before an unforgivably uncomfortable montage scene where Enid and Carl roller skate together down a road. Putting aside for a moment that THE WALKING DEAD wants us to accept that Carl just happens to come across roller skates that are the perfect size for he and Enid, this is the epitome of unnecessary scenes. It was bad enough that THE WALKING DEAD decided to devote so much time to a glorified meet cute, but it seems they insisted on rubbing our faces in it. Any viewers on the fence about this show’s issues with scene priority were surely convinced that those problems exist after this episode. 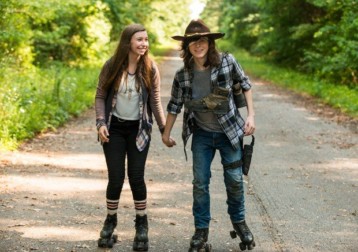 Enid and Carl share a kiss that was awkward to watch, but for the wrong reasons. Rather than reminding us of our own awkward teenage romances, Carl and Enid’s uncomfortable presence on screen is stemming from their poor acting and dialogue, rather than their playful flirting. They’re delivering lines that were clearly written for adults, and their interactions are lacking any resemblance of what teenage love looks like. For those of us that aren’t completely distracted by Carl’s Farrah Fawcett hair-do, we can’t help but feel apathetic to their relationship. Why would we want them to be together?

For those that think I’m sounding harsh, let’s remember that this is the same show that made us watch two men get beat to death with a baseball bat. It’s hard to deny that a roller skating montage scene, at the least, conflicts with the show’s tone.

Those that are hopeful for next week’s episode may want to lower their expectations. Sunday’s after episode sneak peak included scenes from the rest of the season, rather than the next episode like before. This is likely because the next episode is lackluster, and AMC didn’t want to scare audiences away. If you need to be convinced, the sneak peak confirms this.

This is just another scene with two characters recapping something the audience already knows. Even though this includes Tara and Heath, two characters we have not seen yet this season, I suspect we wont be learning anything new about them in this episode.

After 4 episodes of filler, the audience is left wondering if THE WALKING DEAD plans on letting us know when they decide to begin this season’s main storyline. It’s a shame, since the premiere started the season off with such intensity. Critics continue to slam each episode every week, and THE WALKING DEAD will need to change their formula if they wish to stay at the top. Until then, they will continue to run the risk of losing audience members. THE WALKING DEAD may be the most watched cable television show now, but the bigger they are, the harder they fall.