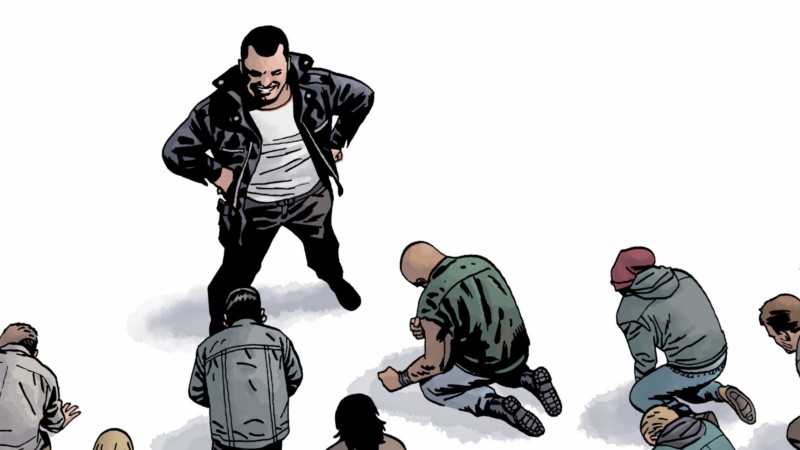 THE WALKING DEAD #168 continues the fallout of Andrea’s passing. Instead of explicitly mourning in this issue, however, Rick and company must deal with The Saviors as Rick reveals the death of Sherry. Robert Kirkman paces this issue relatively well, and it is the first time in a few issues Negan takes center stage. With one of the series most intense moments occurring in the past issue, THE WALKING DEAD #168 manages to relax in regards to drama. Instead, it focuses on the strong characterization of Negan and the sensitive state of Rick.

READ: Need a recap? Here’s our review of the emotional last issue of THE WALKING DEAD!

THE WALKING DEAD #168 Brings Negan to the Forefront

THE WALKING DEAD #168 starts out in a fashion very true to the nature of the series: moving on. We find various individuals contributing in any way they can, from burning the dead to rebuilding the main gate. The real meat of the issue takes place when Rick reveals to The Saviors that Sherry is in fact dead. This provokes The Saviors, forcing Rick to once again try and salvage the peace between the groups. He isn’t very successful, but Negan steps up to the plate (sadly, without Lucille) and spits his philosophy.

His usage of profanity is top-notch. It’s here you can really tell that Robert Kirkman isn’t writing the character; Negan is writing himself. His rant lasts about half of the book, and it’s so fascinating to see. Kirkman has managed to create a character that hasn’t so much developed, but rather has allowed us as readers to change our own perspective. Negan is a bad person, plain and simple. However, he’s intelligent enough to know what side to place his chips on. He still can hardly be trusted, but it seems as though Rick realizes that that’s okay. In a dystopian society like this, you can’t expect to only have moral companions. You have to work with whatever is thrown at you.

Eventually, Negan manages to convince The Saviors to turn around and go home, after which he gives his condolences to Rick. It’s an oddly sentimental moment, and the remaining pages are quick with strong imagery. Charlie Adlard really shines in this issue because he makes such slow moments pop with meaningfulness. Last issue saw Rick looking into the light and just picking up the pieces. It was inspiring, and we as fans loved it. But THE WALKING DEAD  #168 is a bit more realistic: Rick is moving on, but he’s still mourning. After Negan sends The Saviors away, Rick spends the remainder of the issue staring into space. Carl attempts to break through but fails. Eventually, he falls asleep on Andrea’s grave. Adlard portrays him in a way that isn’t defeated, but more so tired. Where does Rick mentally go next?

Transitioning Towards the Future

The only real criticism I have with this issue is the easy solution. Negan manages to persuade The Saviors without much of an argument. John gives a little attitude, but it isn’t much. Admittedly, Negan does point out that none of The Saviors really liked Sherry, but it still felt like too easy of a transition. Do I wish a death occurred? No, not really. But a scuffle would have gone a long way to at least show tensions are high. But considering I’m reaching for this criticism, this is a solid transition issue that fans have come to expect and enjoy from the series

Overall, THE WALKING DEAD #168 is a great comic. After such a tough and emotional issue taking place in issue #167, it’s hard to follow up with something meaningful. However, Robert Kirkman simply moves the plot along, which is really all we can ask for in a series as long as this. As long as the plot moves forward, as long as characters develop, then things are positive. That’s what happens here, and fans should be excited to see what happens with Rick, Negan, and the remaining Whisperers.