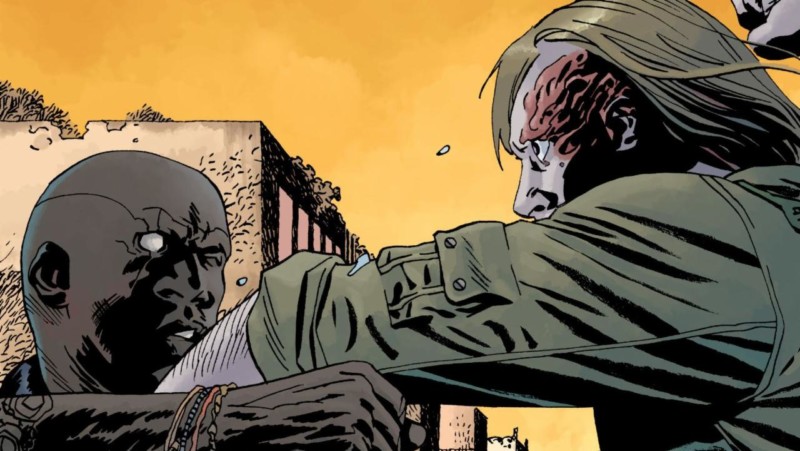 THE WALKING DEAD #166 takes a break from the wave of zombies piling into the ocean. This issue instead focuses on the personal: Andrea’s fate and The Saviors. Issue #165 left us with one of the biggest cliffhangers in the comic’s history. THE WALKING DEAD #166 addresses these inquiries flawlessly. Fans have waited months to see how The Saviors would finally involve themselves in the current plot line. The creative team delivers, as writer Robert Kirkman takes his time in properly pacing the book, and artist Charlie Adlard draws out the characters’ emotions in great detail.

The comic begins with Andrea acting heroically. Rather than worrying about her neck wound, she is completing the mission. It’s still unclear whether this is a bite or gunshot wound, but she’s definitely losing steam as the pages progress. Back at Alexandria, Rick and Negan fight their way through a horde and reconnect with the others, including Carl. This reunion is short-lived, however, as The Saviors appear and make their objective known. 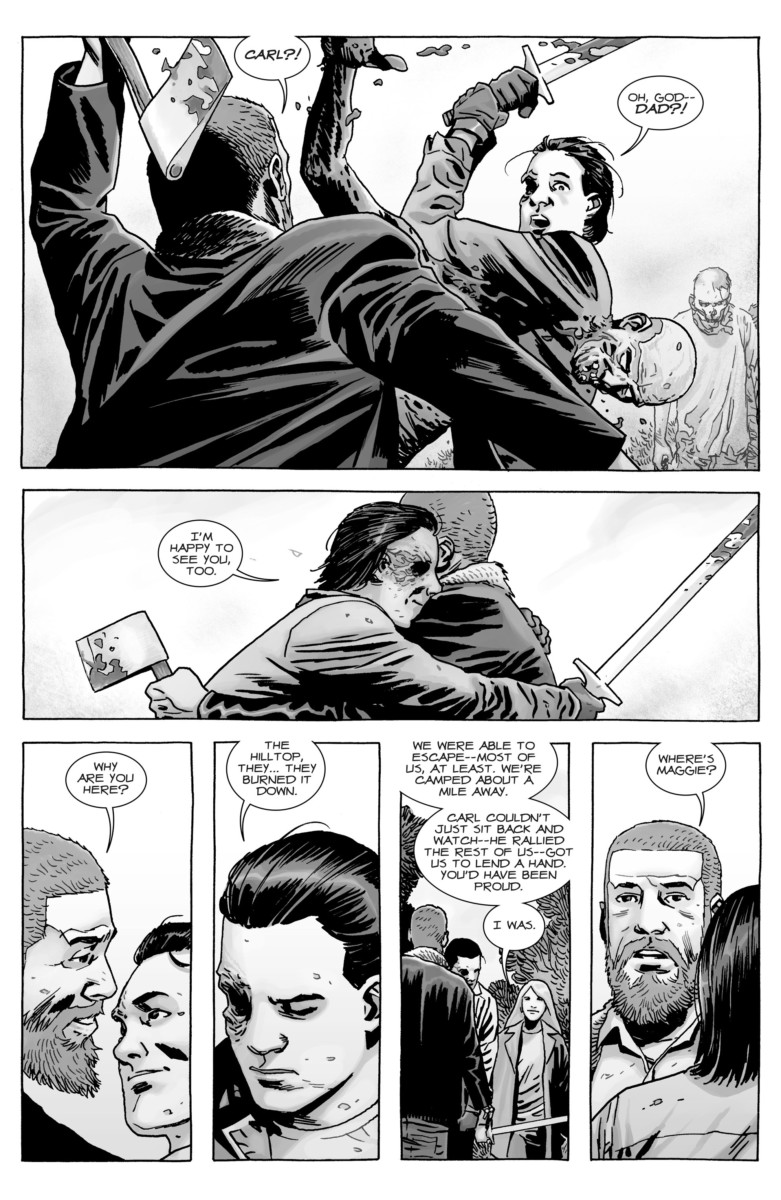 Image from THE WALKING DEAD #166, courtesy of Image Comics.

It appears as if The Saviors, with their flash and powerful guns, have the upper-hand. Negan’s pressence, however, throws Sherry and her crew off, giving Dwight and Laura an opportunity to escape. This results in a standoff, until Rick pleads to both sides to stand down. He requests Sherry join him inside to talk matters through. The conversation that follows between the two makes it clear that Sherry is not willing to compromise — she wants absolutely nothing to do with Rick’s network. Rick tries to reason with her, but this riles Sherry further, leading to a dramatic end. Without giving away spoilers, the conclusion of THE WALKING DEAD #166 will have repercussions felt for many issues to come.

THE WALKING DEAD #166 is a great issue to bridge away from the mass chaos that’s been occurring in this series for the past year. Kirkman demonstrates his pristine pacing and plot development, and readers reap the benefits. In previous story arcs, Kirkman kept the story very linear, having one plot development follow another. It worked, but I commend him for trying something new in #166 with having multiple dilemmas occur simultaneously. The Whisperers are still a threat, yet now so are The Saviors, the latter I’ve been itching for to see in the story since issue #161. What will Rick Grimes and company do now?

READ: Is THE WALKING DEAD considered a comic or graphic novel? Does it even matter?

There really isn’t that much action in this issue, but that’s perfectly okay. THE WALKING DEAD is a great drama, and that’s the genre issue #166 falls into. The dialogue between Rick and Sherry is acute, while the standoff right before their meeting is so tense that you could hear a pin drop. Dwight’s characterization is particularly delightful, as his stubbornness juxtaposed against his loyalty reminds me of how much his character has developed.

My only criticism is with how Rick quelled the standoff. While he is a man capable of talking down his greatest enemies, it all feels unrealistic here. The Saviors have been shown plotting this attack for the past five issues, so why did they stand down so quickly? Is Rick Grimes that convincing? While this is a fictional comic book about zombies, we’re still dealing with human emotions. Surly tempers were high, so the lack of a fight feels odd. It feels like Kirkman rushed the scene a bit to move the plot along. The standoff could have lasted the entire issue had the scene shifted to focus on Andrea, showing her struggle to stay alive after the zombie skirmish. Still, if anything, this issue shows The Saviors are nervous about defecting from Rick, and that they are not sure of what they want. 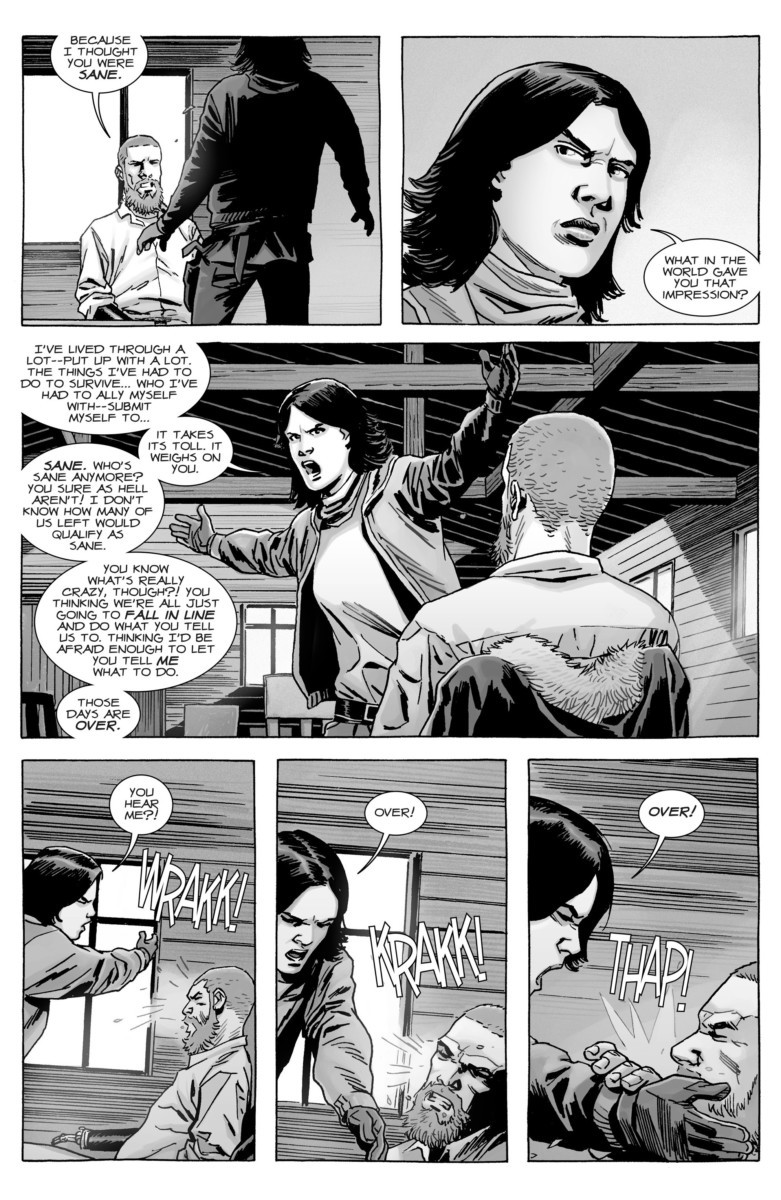 Image from THE WALKING DEAD #166, courtesy of Image Comics.

Despite the lack of dead in this comic, Adlard’s penciling has the living looking just as interesting. The Saviors in particular jump off the page. This is the most we’ve seen of Sherry thus far, and Adlard really brings her to life. At one point, Rick asks if she’s lost her mind. Sherry is a woman who has seen so much death and has put up with so many men attempting to dominate her. This all comes pouring out onto her face with Rick’s question, giving her a look of madness that is brilliant but not cliché. She looks determined with rage. The rawness of her anger radiates from the pages.

LISTEN: THE WALKING DEAD is one of the greatest comics out there. Here is why we love it!

THE WALKING DEAD #166 continues to run its course of consistency. I’m still itching to know about the remaining Whisperers and what will happen to Andrea, but my curiosity is satiated by The Saviors. Kirkman’s the master of suspense, so it could be months before her demise finally happens, if it happens at all. If it does, will that put Rick over the edge? Will he become insane like Sherry? THE WALKING DEAD #166 gives us so much information and even more questions. That’s why we love the series.