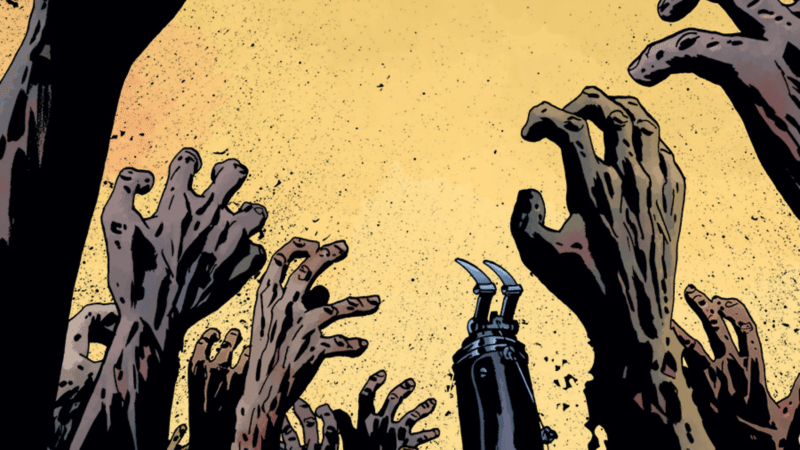 Coinciding with Image’s 25th anniversary is THE WALKING DEAD #163, one of the most anticipated issues of this series. It has broken pre-order sale records (the issue is only 25 cents), and it’s the beginning of the new story arc: “Conquered.” While “The Whisperer War” arc ended last month, the plot dealing with these enemies able to walk amongst the dead is only getting thicker and thicker. THE WALKING DEAD #163 is an exciting issue that showcases our heroes giving it their all while anticipating the worst. 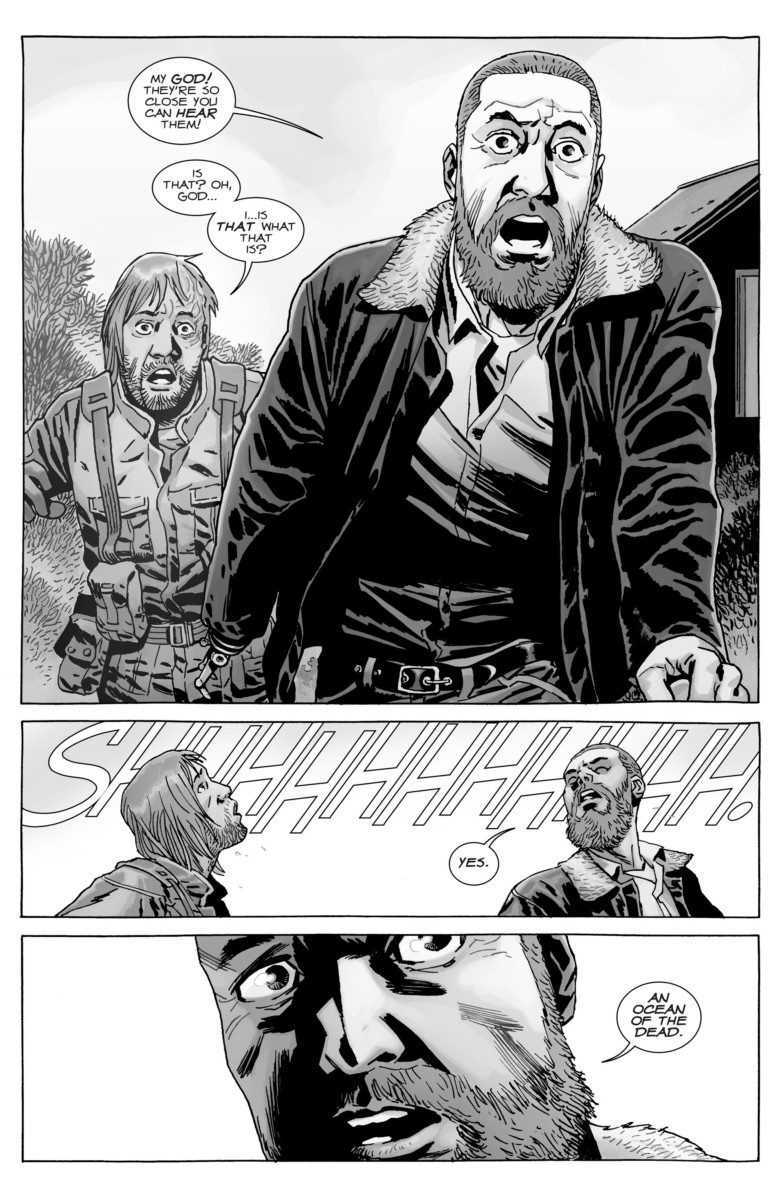 The anticipation of what this ocean of the dead would entail for Alexandria kept me itching throughout the month leading up to this issue, and Robert Kirkman doesn’t disappoint. As the wave approaches at the beginning of the issue, Eugene, Andrea, Dwight, and others set out on horseback to try and divert the attack. Their attempts are futile at first, as the narrow space and the overwhelming wave of walkers prevent them from reaching the sides and leading the zombies astray. Instead, the gang breaks up into pairs to divert just a few hundred at a time towards the nearby coast.

READ: Image turns 25! Here are our top picks from the publisher!

Meanwhile, inside the confines of Alexandria, Rick and company scramble to the gates to meet the walking dead. In order to avoid making noise, they use knives to slowly kill the zombies in the vanguard. This is reminiscent of what occurred in the prison several years ago, however, while that was a grueling yet successful process, this time around proved very different: there are just too many zombies. Soon the wave begins crushing the zombies that were leading the charge, eventually breaking the gate and allowing a surplus of the living dead inside. From afar, the Saviors look upon this chaos through a pair of binoculars with absolute enjoyment. There’s no telling how our protagonists will get out of this mess. 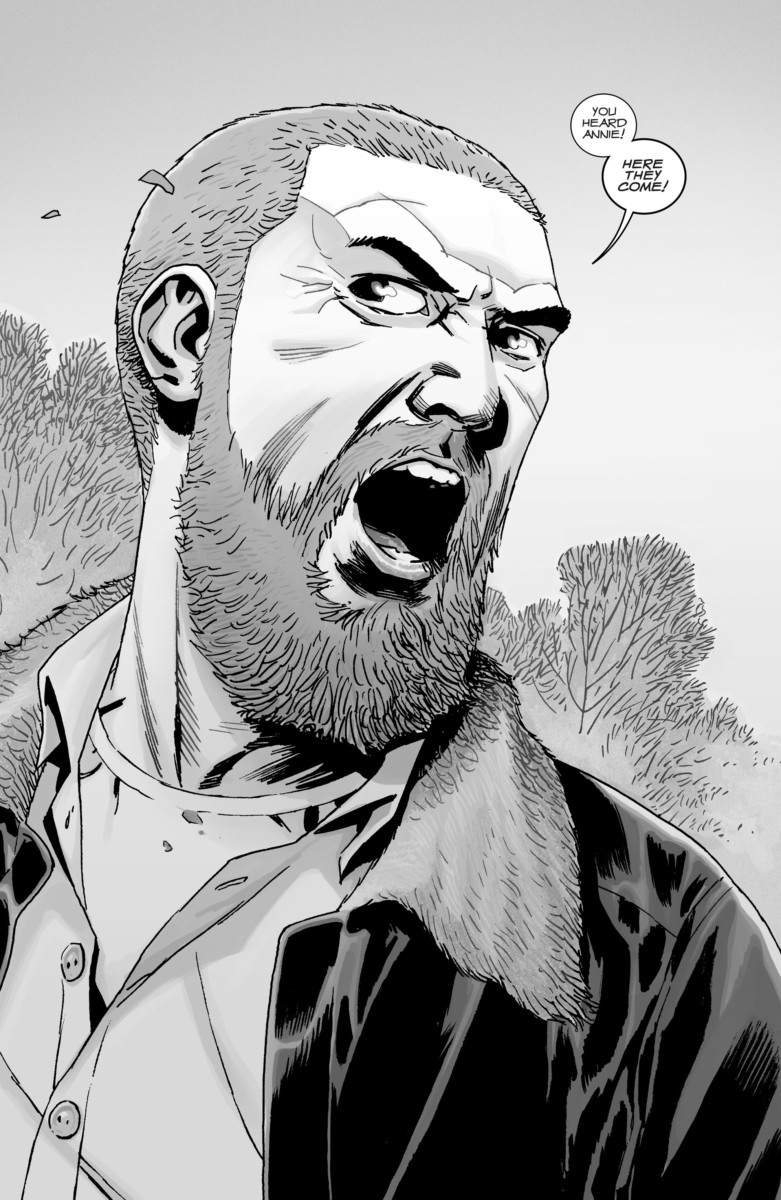 THE WALKING DEAD #163 is just the beginning of what I believe will be a major shift for the series. Ever since the central plot began taking place in Alexandria many years ago, there hasn’t been much roaming compared to the first half of the series. I’m not necessarily saying that this has been a good or bad thing, but I do believe that, with this incoming wave, the destruction will be too great to recover from. This would be a good excuse for a shift in setting if Kirkman is ready to move the plot further along. I think an actual defeat that forces our heroes back into the wild would add a lot to this series. It’s impossible to say what direction Kirkman will take. I could see reinforcements from the Hilltop arriving within two issues, and I could also see a major character falling victim to this travesty. Even if the setting remains in Virginia, even if Rick and company miraculously survive once again, the longevity of this series has proven that nearly anything can happen and the chances of the story becoming stale are slim to none.

READ: Need some catching up? Here’s our review of THE WALKING DEAD #161!

The artwork from Charlie Adlard is consistent, as always. I particularly enjoy the moments where the sheer mass of the wave forces the zombies to crush one another. There is one scene in particular where the decaying body parts literally fall off the zombies and squeeze through the gaps in the gate; the awe portrayed on the faces of Rick, Paula, and Siddiq is truly twisted. Just like in “The Whisperer War,” Adlard skillfully conveys our characters’ doubts as he highlights the fear and uncertainty on their faces. Of course, the humans aren’t the only reason fans flock to this comic; the zombies are also important. Adlard continuously draws them in ways that make my eyes light up with demented glee. Just before the wave reaches the gates of Alexandria, multiple zombies plummet into the surrounding trenches and onto the protruding wooden spikes. The results aren’t only gruesome on paper, but the artwork sparks your imagination and puts yourself into the shoes of the humans witnessing this chaos unfold before them. 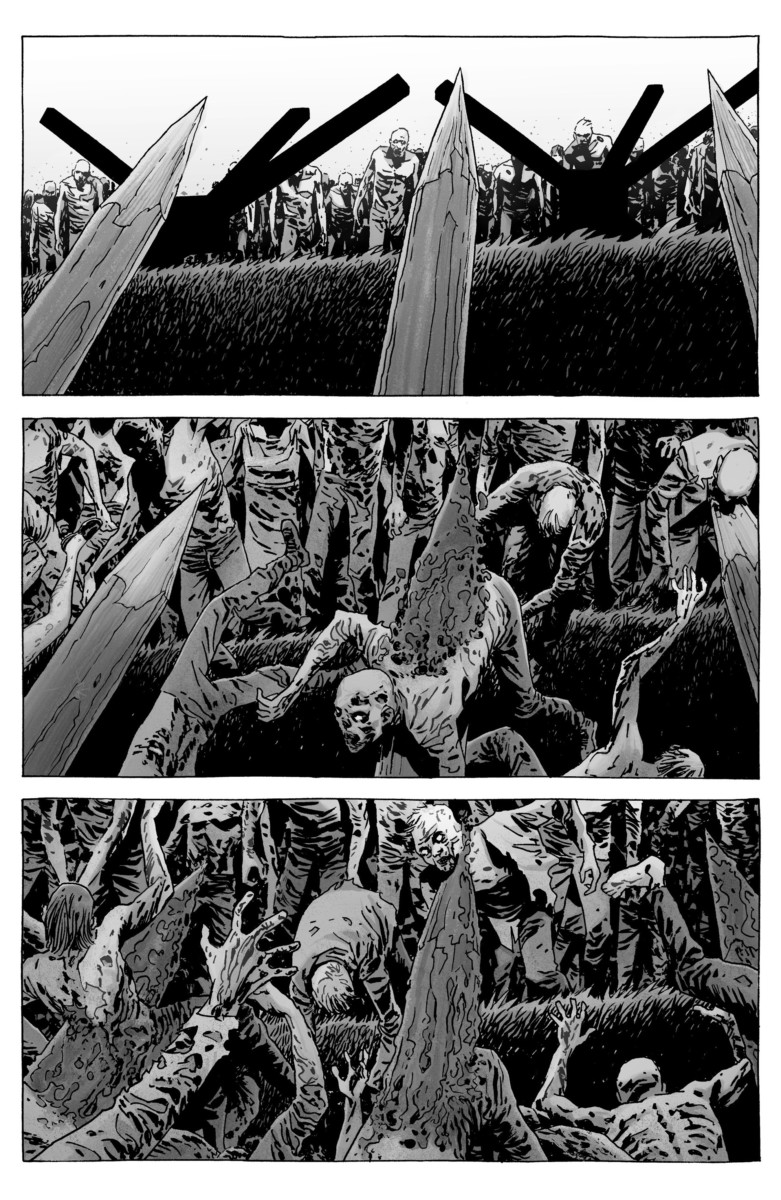 Overall, THE WALKING DEAD #163 proves this series isn’t running out of steam anytime soon. The fact that “The Whisperer War” ended in the last issue and that “Conquered” began in this one is a sign that Robert Kirkman isn’t pulling his punches. If you’ve been interested in where the plot has been going since the introduction of the Whisperers, you’re going to love this installment. If you’re new to THE WALKING DEAD, you’re going to enjoy this issue as it’s a solid starting point. It’s straightforward enough to follow the plot, and there aren’t too many character reveals that would confuse newbies. Kirkman and Adlard yet again produce amazing material that not only demonstrates the depth of this series but the depth of Image Comics as a whole. So pick yourself up a copy of THE WALKING DEAD #163 to celebrate Image’s 25th anniversary, it’s only 25 cents after all.