Issue #161 of THE WALKING DEAD brings us to part 5 of “The Whisperer War.” Part 4 ended on an exciting note when we found The Hilltop under attack by a faction of The Whisperer’s dead army. Flaming arrows were launched to lead the assault on The Hilltop, and the continuing strike in this issue is very reminiscent of when Alexandria was rushed during the “All Out War” story arc a few years ago. In very typical Robert Kirkman fashion, the reader is unsure how safe to feel: which side of this war is winning thus far? THE WALKING DEAD #161 delivers fast-paced excitement in a near-concluded story arc while planting the seeds for future storylines to come.

READ: Unsure what “The Whisperer War” is? Catch up with our review of THE WALKING DEAD #157!

The first thing I want to commend this issue on is its continuation of covering multiple plot lines in a coherent manner. What I mean by this is that this war is being fought on many fronts, and with so many characters being developed, it can get a bit confusing if the writer does not take proper note of this. Kirkman does an excellent job in this department. From Vincent returning from The Saviors’ camp to Rick waiting impatiently for news of the battles to get back to Alexandria, we are given glimpses into the lives of every character. This hints to us that their role in the development of this overall plot matters. The creative team have done a wonderful job of creating smaller comic panels to present all of these integral threads. Basically, there are no loose ends being forgotten from what I can tell, and sometimes in a piece of literature with many characters running around, that can be quite problematic. Kirkman does an excellent job of showcasing scenes depicting minor characters and their actions, keeping you up to date on what is going on throughout the web of plots. He doesn’t allow you to forget about minuscule details because he is displaying them directly for you. 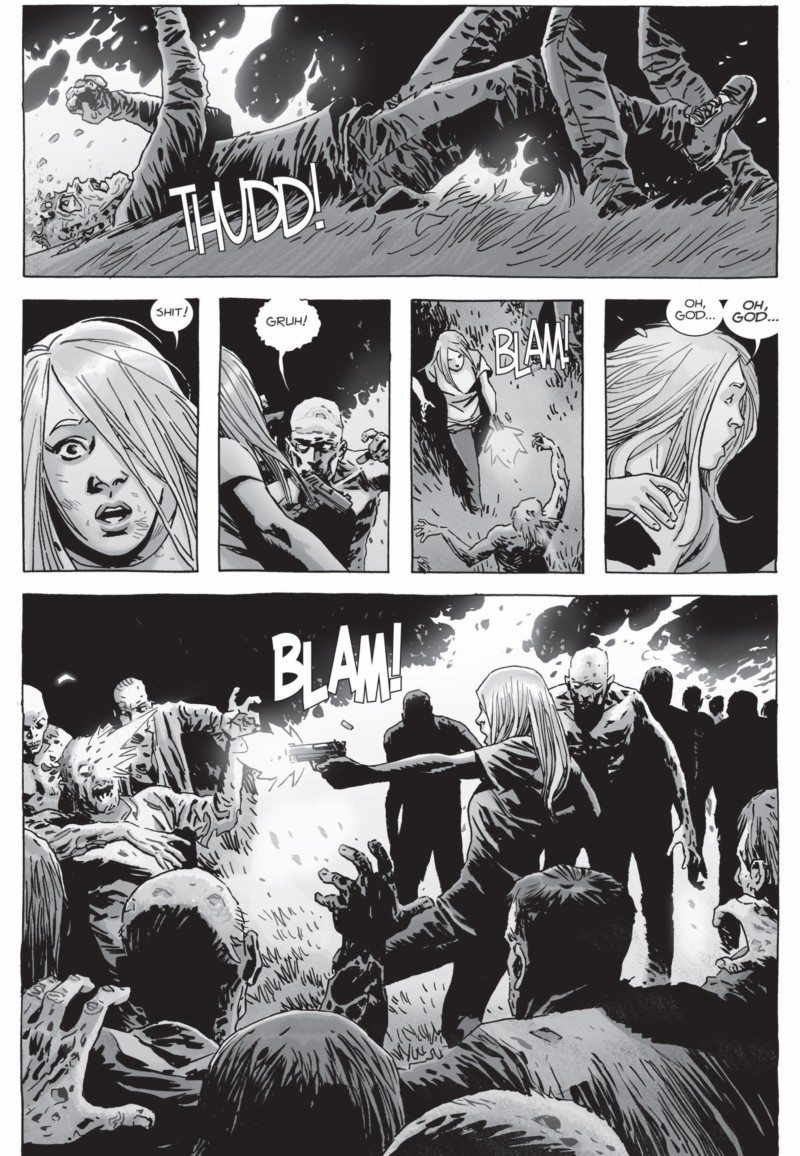 THE WALKING DEAD #161 is certainly a teaser. Without attempting to emphasize too many spoilers in this issue, the plot thus far in “The Whisperer War” has left none of the characters we love and behold dead, or worse, walking amongst the dead themselves. I’m not sure if Kirkman is still feeling awful about the death of twelve characters back in issue #144, or if he’s waiting for the final part of “The Whisperer War” to then put the axe in someone. I certainly was expecting baby Hershel to have been passed by this issue, especially with the fire and attacks raging all about him. There is still one more issue in this arc, however, to see who actually makes it out of the war alive.

Charlie Adlard’s art is as good as ever. There are a few panels that appear a bit rushed, but then there are some that are completely spectacular. With as much chaos as there is happening, every panel is clear and intriguing. Stefano Guadiano’s inking is a big reason for some of the splendid closeups, and I think it’s important to commend these two artists for making the maiming of zombies continuously interesting and appealing after 160 issues of mayhem. 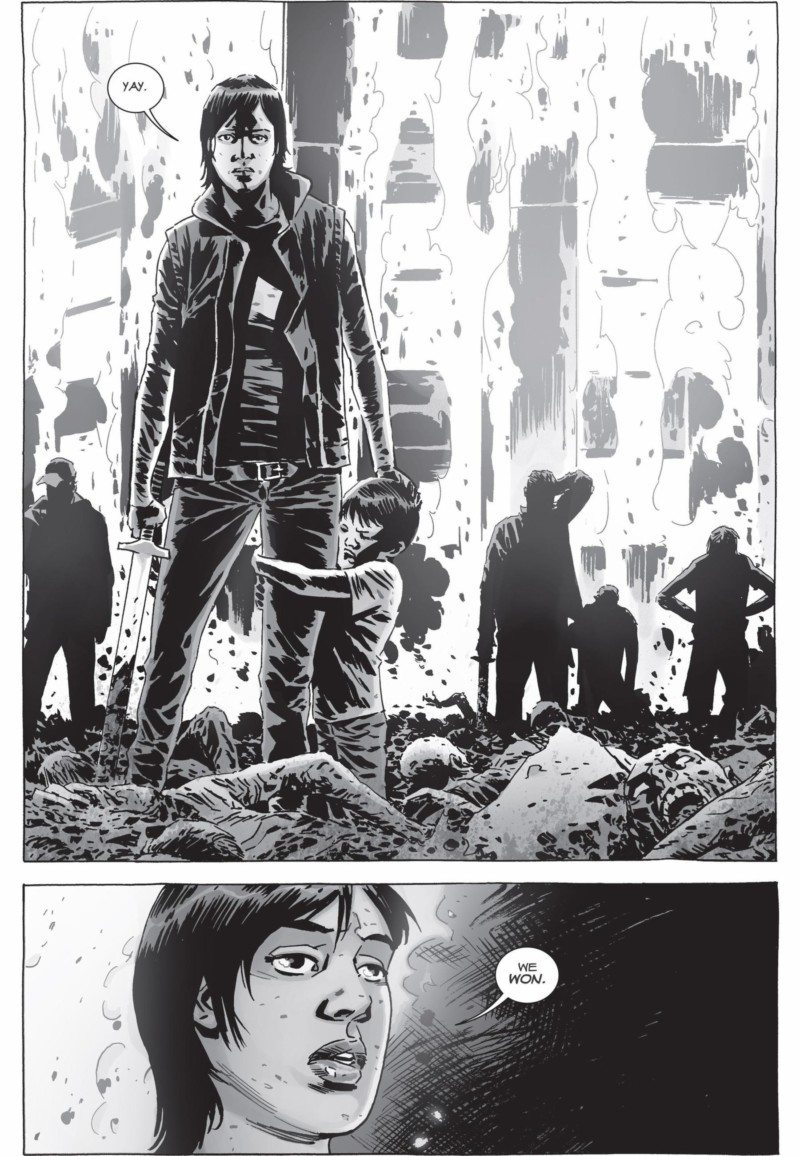 There are two panels in particular that really made me look at the page for a solid minute. When The Hilltop is supposedly secure, Maggie is standing triumphant with an apathetic look on her face. Her surroundings are literally on fire, and with a sword cast to one side and her frightened child on the other, we see another human who has lost so much in such little time. Even following a valiant victory, she is numb to the world around her that took both her father and husband, as well as nearly taking her only child.

The flaming assault on The Hilltop appropriately took up a large chunk of the issue, but there were many subplots being addressed that will hopefully take on more focus in the concluding episode. One of those is the death of Lucille, Negan’s precious baseball bat. A sort of archaic scepter of sorts, Lucille has been one of the most interesting weapons (dare I say characters?) in THE WALKING DEAD. From its use to kill Glenn to Negan’s sexual innuendos towards it, Lucille has been something to be in awe at for the past five years. Perhaps that is why Negan is almost crippled from Lucille’s destruction. His only scene in this entire issue has him on his knees crying as he explains to Dwight, “you’ll never understand what she represented to me.” I’m expecting a backstory, but I’m positive his plunge into provocative lunacy occurred around the same time Lucille came into his life.

Then we have Beta, who is such a mess. In fact, he is such a mess that he can barley remember the entire battle plan The Whisperers have put into place. While Beta is most likely a bit off from loss of blood, his mental state is certainly in disarray from the way the battle has been swaying. His attitude as a whole has certainly changed since Alpha’s death. But these temporary crippling demeanors are a good thing for Negan and Beta: they add development to their personalities. Both of these individuals losing something that has made them rounder characters. They are proper villains, a piece that is integral to a comic book story. 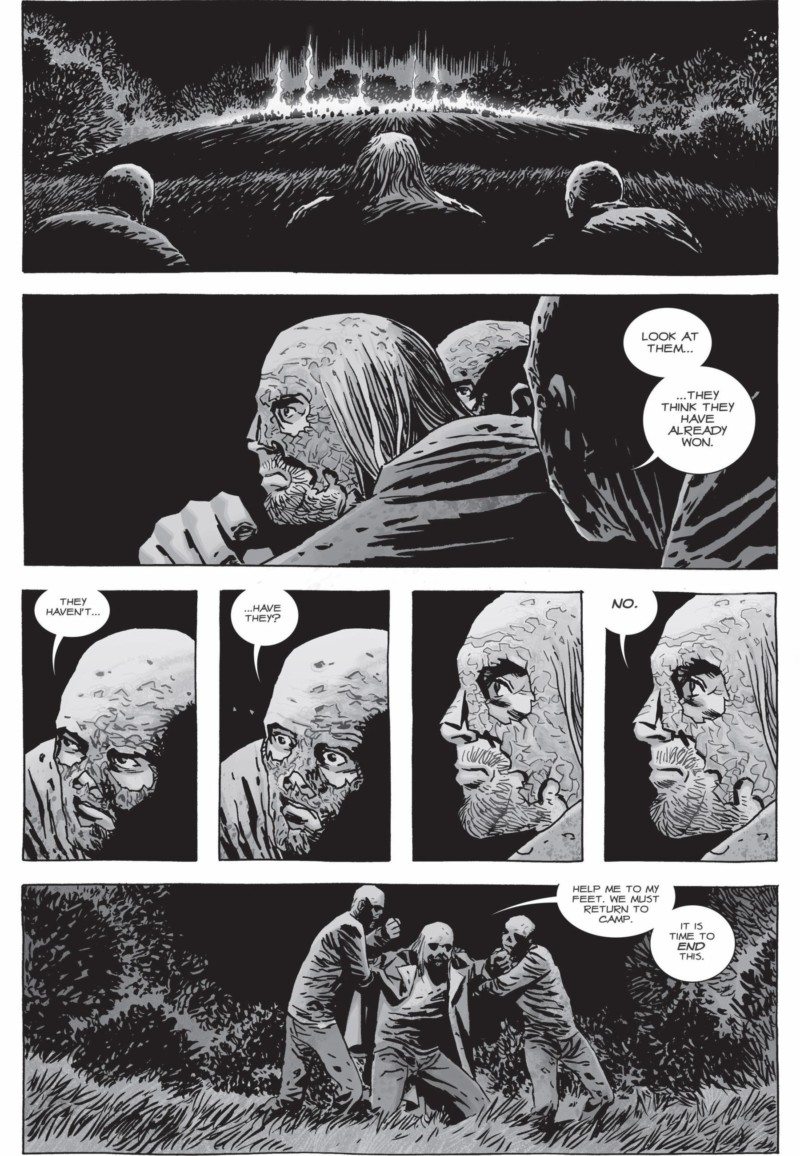 One of the few criticisms that I have about this issue is one that I’ve always had with THE WALKING DEAD: are there really that many zombies? Particularly, did The Whisperers have that many stockpiled? This question came to me again as Beta questions the status of his army, an army that appears never to be depleted. Is it lazy writing to just keep throwing wave after wave of zombies at our ‘heroes?’ That’s probably a matter of opinion. But for a book that is meant to be a bit exaggerated in its gore and horror, this is one critique that I can certainly ignore.

READ: Are you a fan of THE WALKING DEAD show? Read our review of episode 7!

Overall, THE WALKING DEAD #161 is very much a setup issue. That isn’t to say it is a filler piece or one you can breeze over, but rather it is an issue that places characters in integral positions that will allow this series as a whole to continue going. Rather than focus on one story arc at a time, we see Kirkman and Adlard always building and expanding, and that’s very much evident in this issue. Despite death’s lack of shock value (we get it in other ways), I was pleased with this issue. Some of it actually caught me off guard because of how smoothly things went. But that’s what I enjoy about Robert Kirkman: he keeps you on your toes. It’s just a bit morose to realize that surprise in this series comes from a character living rather than dying.