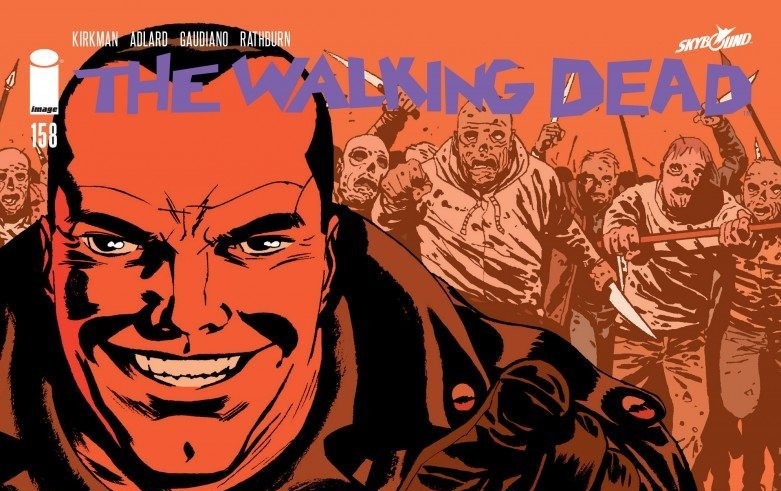 This arc is shaping up to be one of the bloodiest in the history of THE WALKING DEAD. Previous arcs come to mind while reading such an intense battle progress–the Governor’s attack on the prison, Negan and the Saviors attacking Rick at Alexandria–but none of them compare to this. This issue marks the real start of the Whisperer War, as the arc is aptly named. It doesn’t pull any punches.

The first thing we see is Gabriel falling from his guard tower and getting his leg caught and broken between ladder rungs. As he screams in pain, Beta comes over and guts him on the spot. It’s absolutely brutal and it packs the emotional punch this series is known for. Gabriel was a man of God and has always been out of place in this horrific new world. He just seemed to be starting to get a grip on the post-apocalypse world’s rule of kill or be killed when he’s savagely snuffed out like this. 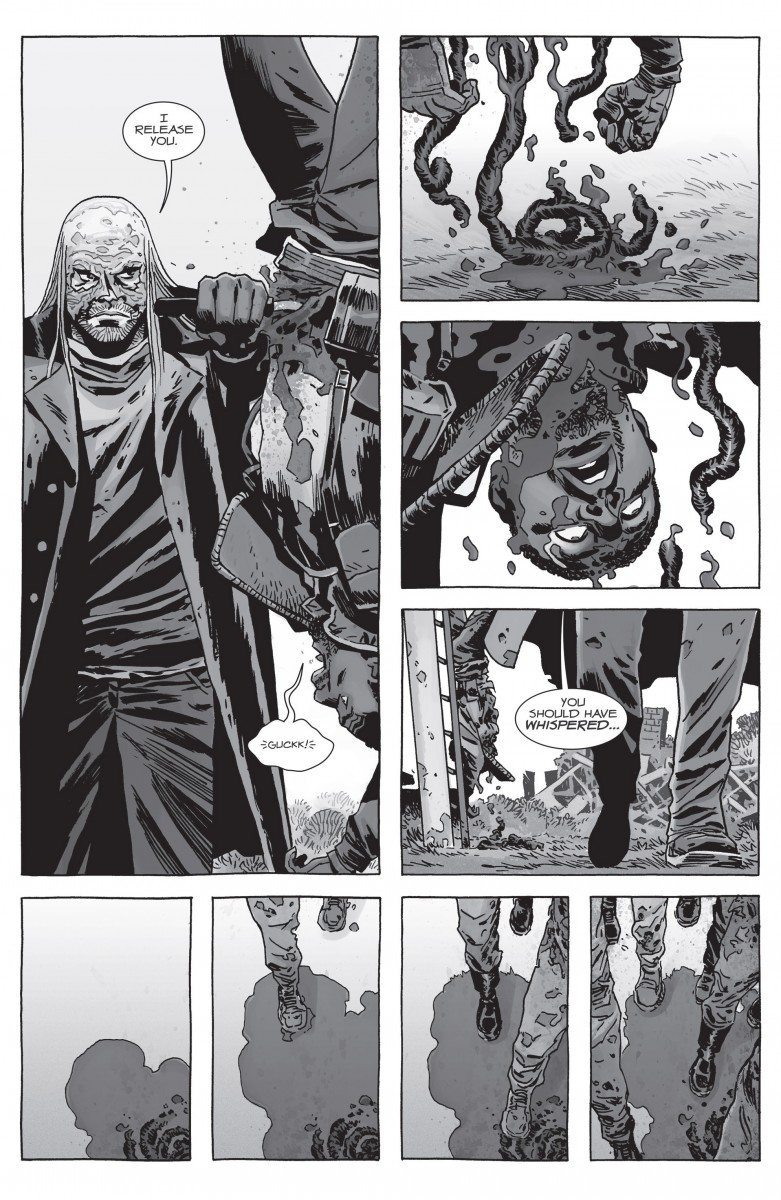 The line Beta uses right after he kills Gabriel is really cheesy, but I’m willing to forgive it.

So right from the beginning this issue is all-out action. It doesn’t slow down once Gabriel is killed. Most of the other characters don’t even know he’s dead at this point. How could they? It’s chaos on the battlefield. The Whisperers hide amongst the horde of zombies attacking Dwight and company. They strike when someone is preoccupied with the zombie threat and cut their throats. The most sickening thing about Whisperer tactics is that once they kill you, you join their forces as a zombie. It adds a psychological element to the horror of this book without being blood and guts–not that we don’t get plenty of that in this issue.

The Whisperers add an element of suspense that has been missing from the series. Zombies haven’t really been much of an issue since our main cast has learned how to turn them into a manageable threat. The survivors have gotten used to them. This led to page after page of characters just mowing down zombies with machine guns, which got boring and predictable. But with the Whisperers lurking behind every zombie? That’s terrifying. This issue was a great example of why THE WALKING DEAD has been so successful for so long. First, it changed the game by being a long-form story on what happens after the dead rise again. Now, it’s challenged with making that horror fresh–which it does beautifully by shifting the focus away from zombies to other humans as the villains. The Whisperers are ingenious. Humans wearing zombie skin? Why didn’t I think of that? It’s such a simple concept, but makes things even more difficult for the survivors.

Speaking of our brave zombie killers, we see some great characterization in this issue. Negan gets to mouth of some of his trademarked hilarious obscenities and we see the reactions of leaders of other communities called to help Rick in Alexandria. Negan gets a chance to redeem himself on the battlefield by saving Dwight’s life at the last second. Negan is constantly trying to prove himself these days. I think he’s started to become a great asset to the group, but not everyone shares my opinion. I can’t blame them though. Negan is the character to watch in this arc. I can’t wait to see where he goes in the future of the Whisperer War.

READ: Need to get caught up? Check out our review of the previous issue!

Artistically, this issue was great. I was constantly peeking through the zombie horde to see if I could see any Whisperers in their ranks. Sort of like a “Where’s Waldo?” of horror comics. Not only did I feel suspense for the characters facing their possible doom, but I myself felt that same suspense trying to find the Whisperers. Comics are great as a medium because you can slow down and appreciate things like that panel by panel.